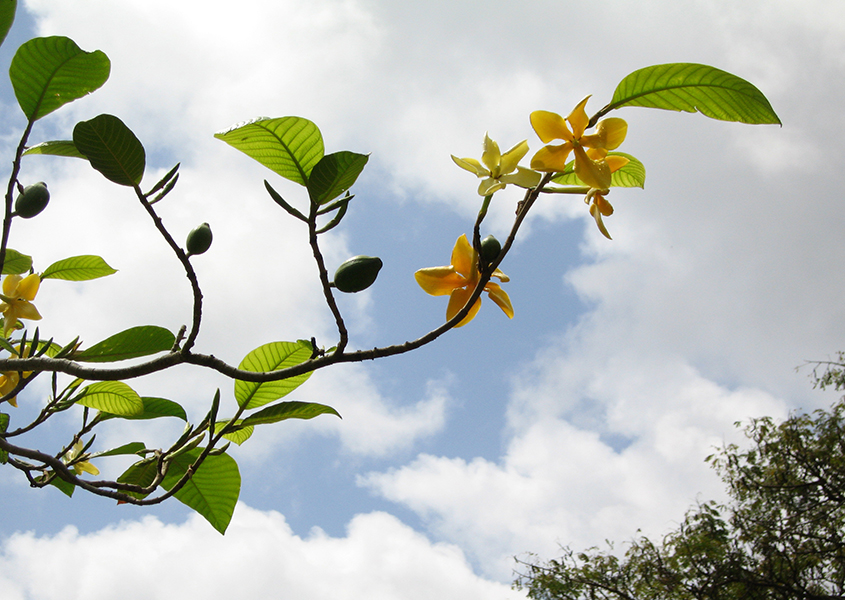 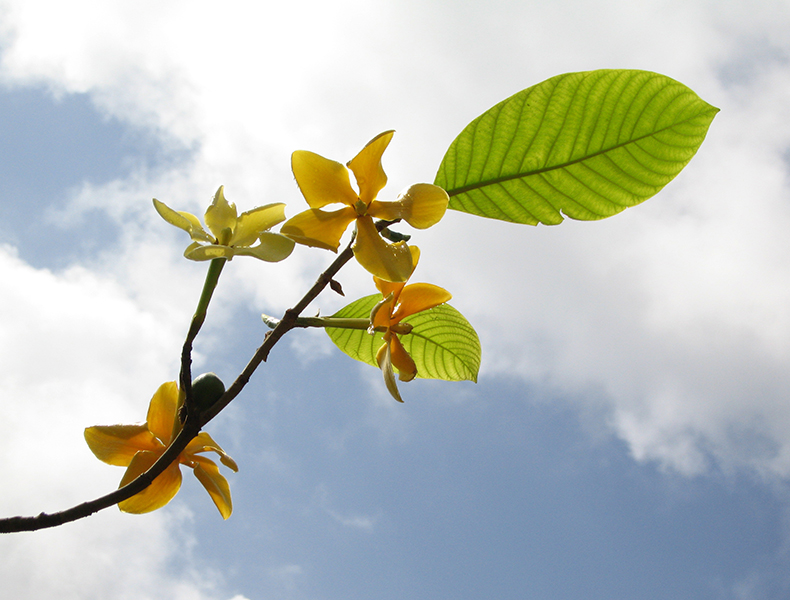 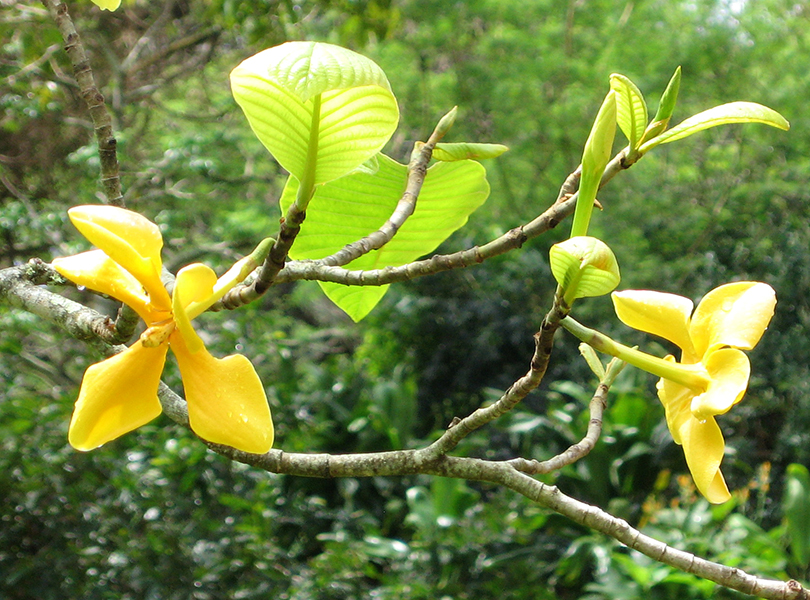 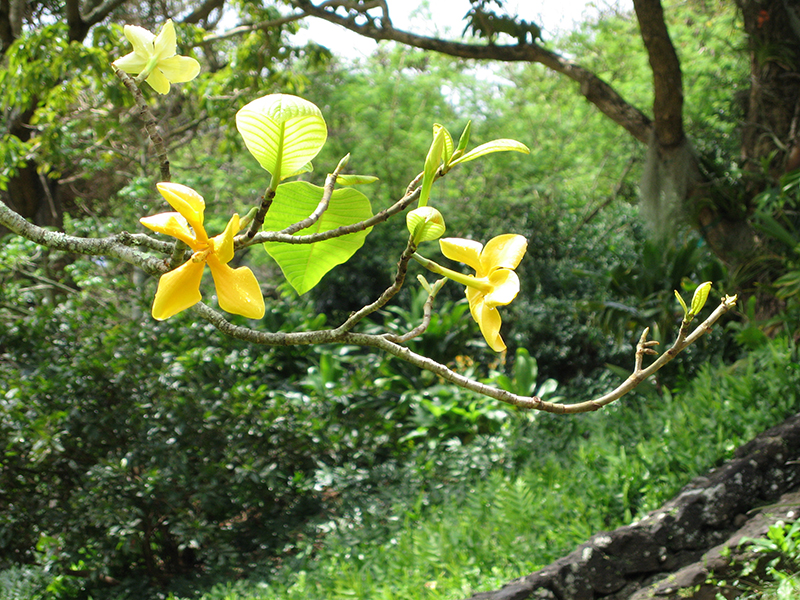 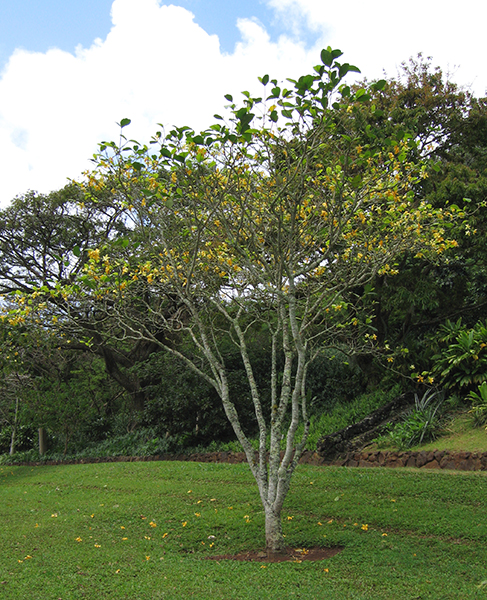 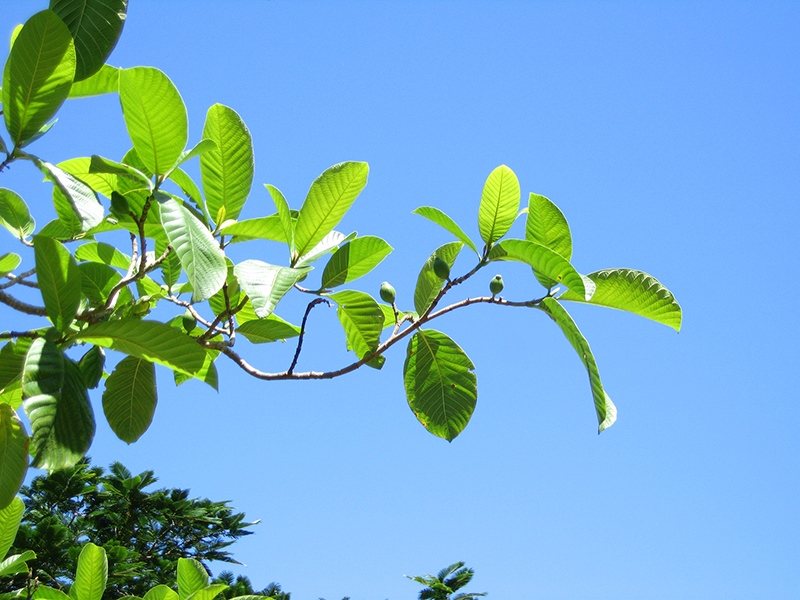 Gardenia sootepensis, also known by the common name Golden Gardenia, is a small extensively branched tree that grows to 9 m tall. The leaves are arranged in opposite pairs along the branches, are oval in shape, and are covered with hairs. The light green leaves have conspicuous venation with the secondary veins running almost perpendicular from the midvein to the outer leaf margin. Solitary star-shaped flowers are borne in the leaf axils and are white when they first open then mature to a dark, golden yellow. The calyx forms a sheath around the base of the long tubular flower, which has five widely spreading petal lobes that are narrow at the base and widen towards the tips. The anthers (pollen producing structures) are inserted into the floral tube and barely extend beyond it. The round fruit contains many seeds that are immersed in a fleshy pulp.

The fruit of another Gardenia species, Gardenia jasminoides, is used in Traditional Chinese Medicine for its bitter properties. Preparations are used for their diuretic, laxative, choleretic, and homeostatic properties and for the treatment of liver cirrhosis and pain associated with dysentery. Iridoid glycosides, including geniposide and gardenoside, have been isolated from the fruit of Gardenia jasminoides and geniposide has been extracted from the twigs of G. sootepensis.

Gardenia sootepensis is native to Thailand where it is found as a canopy species in dry dipterocarp forest that persists without fire disturbance. The genus Gardenia was previously thought to contain up to 250 species but that number has now been reduced to approximately 60 species. Gardenia has a distribution in tropical regions of Asia, Africa, and the Pacific.

Gardenia sootepensis is found in dry dipterocarp forest that is not disturbed by fire in northern Thailand. Dry dipterocarp forest is deciduous forest that is dominated by genera in the Dipterocarpaceae family and the diversity and composition of this type of forest is maintained by regular dry season fires. Where fires are prevented in these forests, the composition of plant species changes with the introduction of plants that would not be able to survive fire damage. Gardenia sootepensis, is absent from forests with dry season fires, but is found in the forest in which fires are absent. Such forests often have a high species diversity because they contain species from both dry dipterocarp and dry evergreen forest that to co-exist in them. This type of forest is thought to be a transitional stage and will typically develop into dry evergreen forest if fires do not occur.

We currently have 2 herbarium specimens for Gardenia sootepensis in our collection. Click on any specimen below to view the herbarium sheet data.