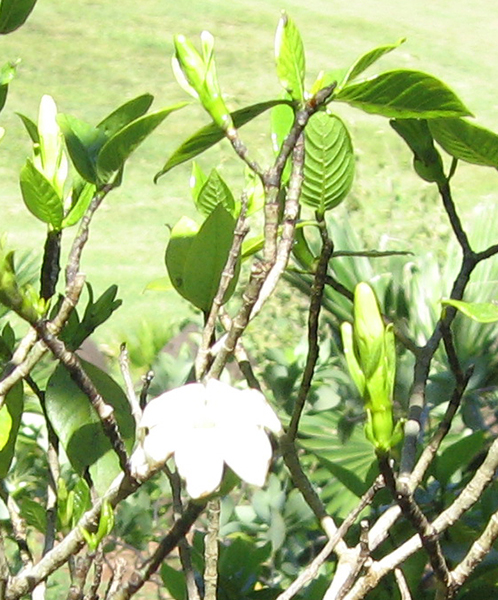 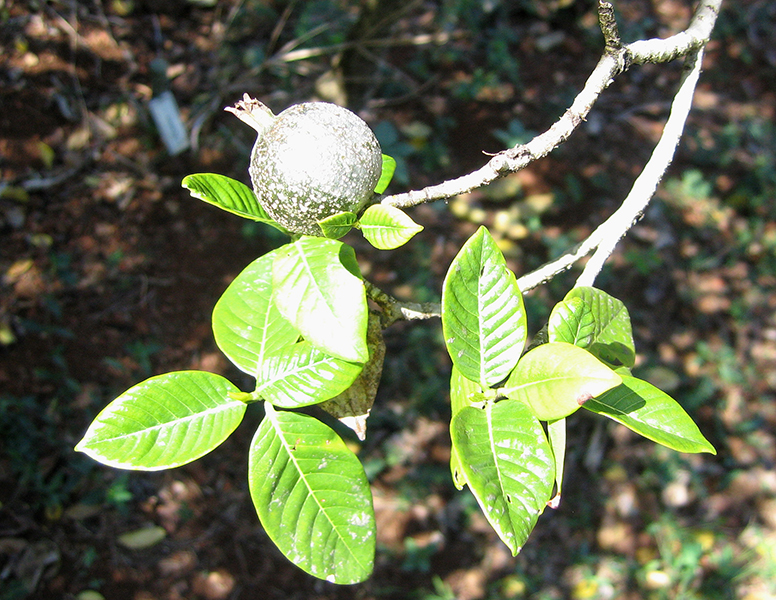 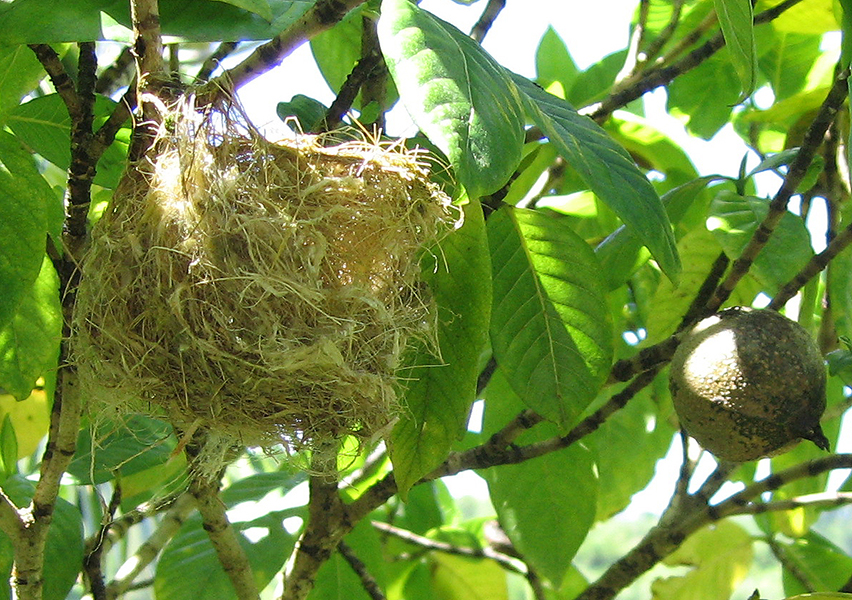 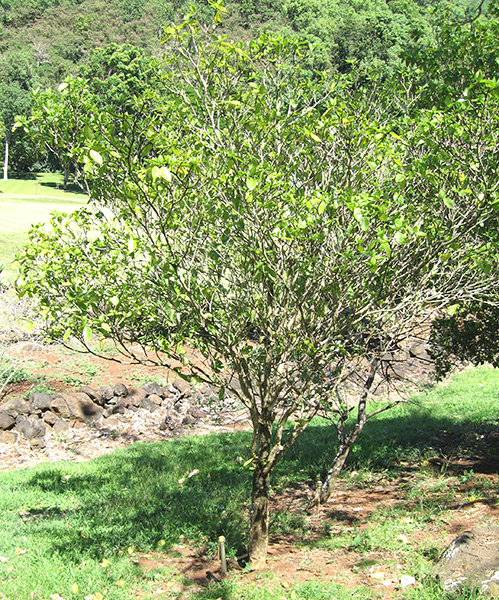 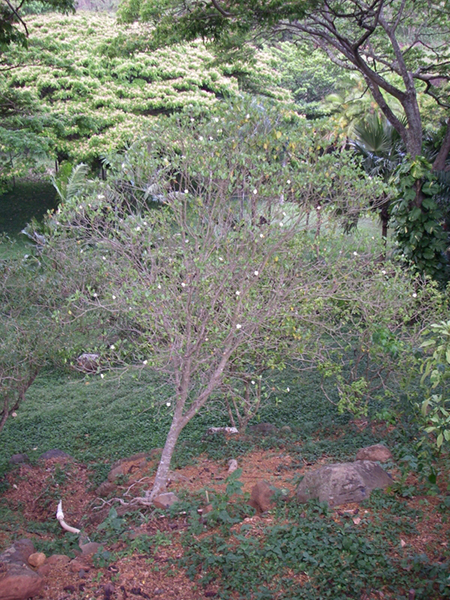 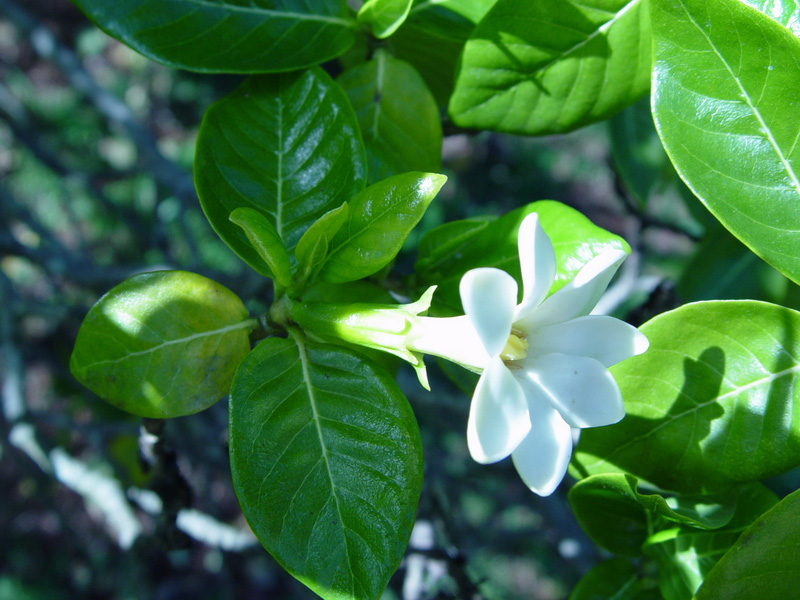 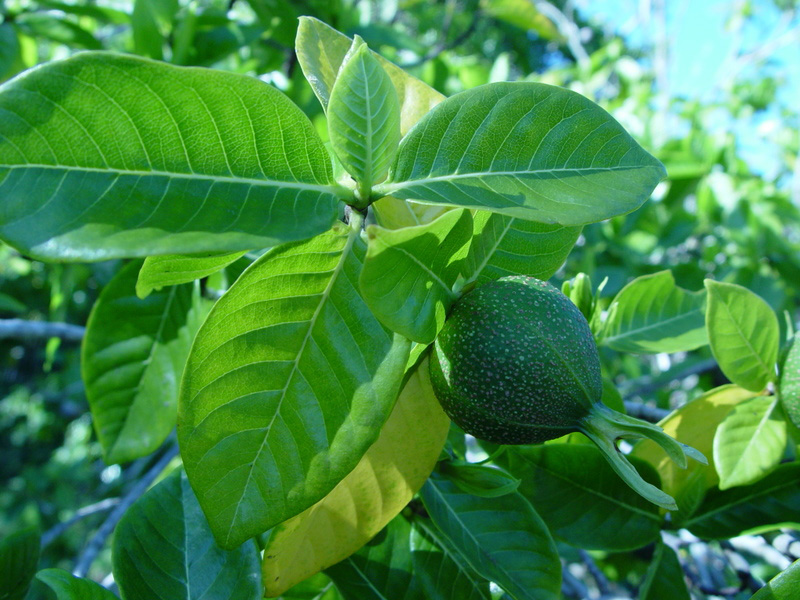 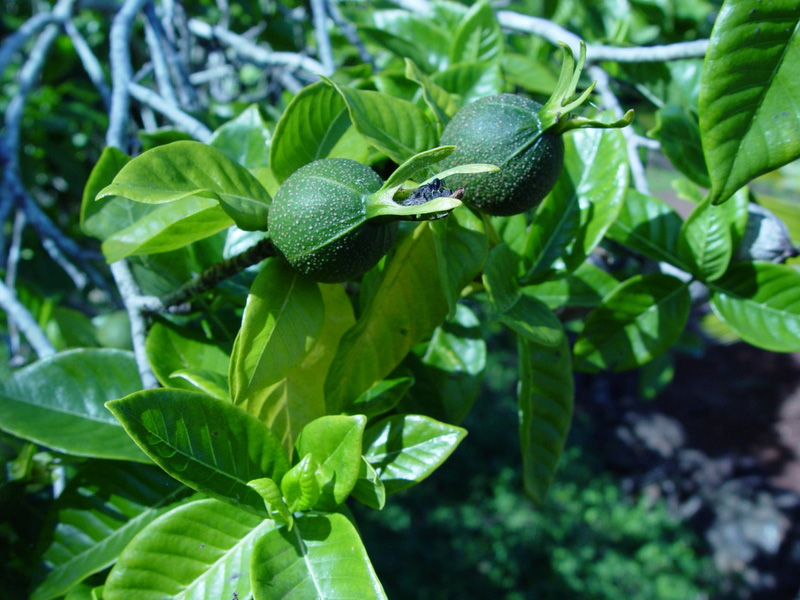 Gardenia brighamii, also known as nanu and Forest gardenia, is a small tree that grows to 5m in height. The branches of all Gardenia species are somewhat square in cross-section with leaves that are arranged in pairs opposite each other along the branches. The leaves are clustered towards the ends of the branches and are ovate in shape (2.2-10.5 x 1.5.5.5 cm) with small bract like structures called stipules present as a collar on the stems between the leaf stalks. The stipules secrete a resinous substance that can be seen coating the young parts of the leaves. On the underside of the leaves small holes called domatia can be seen above the junction of each of the lateral veins with the midvein. The solitary, white flowers are produced at the ends of the branches and are quite fragrant. Gardenia flowers are easily recognized by their distinctive sepals, which are the long (1.5 x 2.5 mm), spurred, green structures at the base of the flowers. The white petals are fused at the base forming a long tube (15-20 mm long) with 6 lobes the spread widely to produce the large, radiate flowers. The ovary, which develops into the fruit, forms below the sepals and petals in the flowers and the remains of the calyx lobes can often be seen at the top of the fruit. The green fruit is covered with white spots at maturity and contains many straw-colored seeds (4-5 mm long) that are embedded in a pale yellow pulp.

Gardenia brighamii individuals in Hono‘uli‘uli Preserve on O‘ahu and Kanepu‘u Preserve on Moloka‘i are fenced to prevent herbivory by ungulates. Seeds have been collected from wild individuals and successful propogation of these seeds has allowed the ex-situ establishment of additional individuals in botanic gardens throughout the state.
Nanu wood was one of several native species used for the construction of anvils (kua kuku) used to beat kapa by native Hawaiians. The anvils made from Nanu were used for the second beating of the kapa and were up to 1.7 m long and 10 cm wide. The beaters used, known as i‘e kuku, were incised with traditional designs that imprinted the designs onto the kapa. In a practice unique to Hawaii a v-shaped groove was cut out of the base of the anvil so that each anvil produced different sounds during the beating of the kapa.

Forest gardenia is endemic to Hawai‘i meaning that it is only found in Hawai‘i. It is native to dry forest between 350-520 m in elevation and was previously found on all the main Hawaiian islands but is now restricted to a few populations containing 1-5 individuals on O‘ahu, Moloka‘i, Lana‘i, West Maui, and Hawai‘i.
The genus Gardenia was previously thought to contain up to 250 species but that number has now been reduced to approximately 60 species. Gardenia has a distribution in tropical regions of Asia, Africa, and the Pacific. Three endemic species are present in Hawai‘i all of which are rare in their native habitat. Six Gardenia species can be found in cultivation in Hawai‘i, which share the distinctive white flowers and prominent spurred calyx lobes with the native species.

In naming the first Gardenia species (Gardenia augusta), John Ellis (the botanist who described Gardenia for the first time) wanted to honor Richard Warner who had helped propagate specimens of the plant in Essex, England. Warner refused to have the plant named after him as he insisted the plant was actually a jasmine species and not a new genus. The genus Gardenia was subsequently named after Alexander Garden of Charleston, South Carolina who was an American physician and botanist who corresponded with Carlos Linnaeus and John Ellis.

Gardenia brighamii is listed as endangered on the Endangered Species Act and as critically endangered on the IUCN redlist. This species is represented by less than 50 individuals in the wild. Ongoing threats to the survival of this species include ongoing loss of dry forest vegetation through land conversion for agriculture, ranching, and development. The establishment of invasive alien species in Hawaiian dry forests have significantly altered the ecosystem of these forests with introduced species such as Fountain grass (Pennisetum setaceum) preventing establishment of native seedlings and providing fuel for forest fires with a frequency/intensity that differs from the fire regime of native dry forests.

We currently have 23 herbarium specimens for Gardenia brighamii in our collection. Click on any specimen below to view the herbarium sheet data.