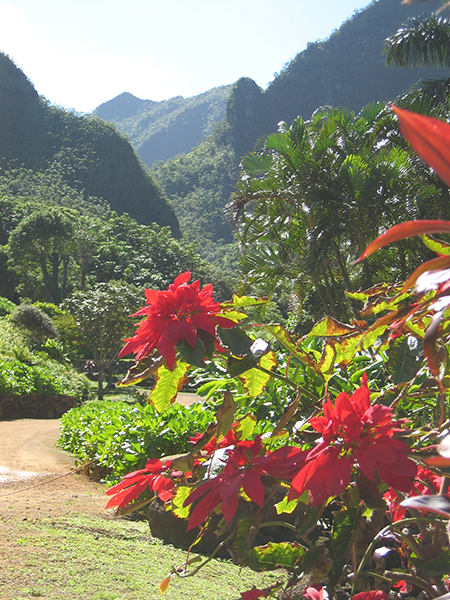 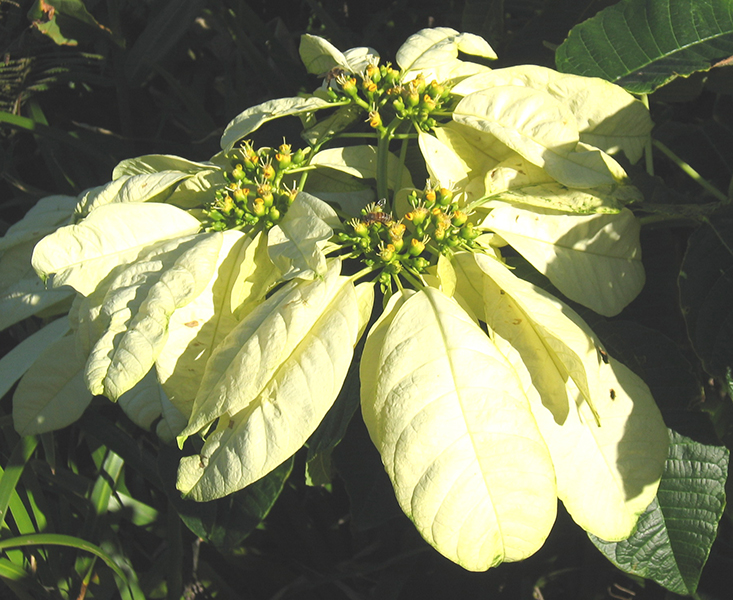 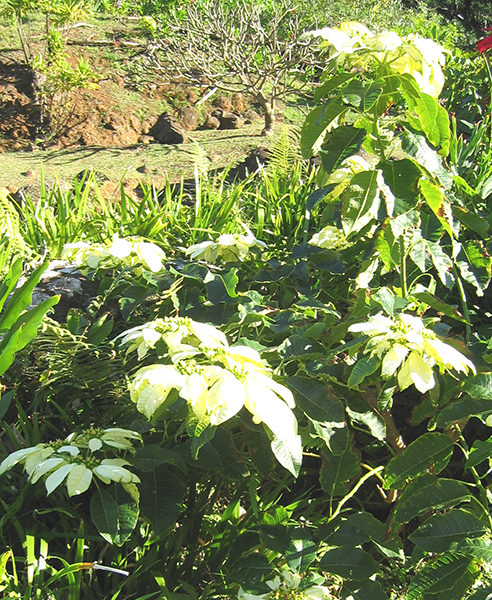 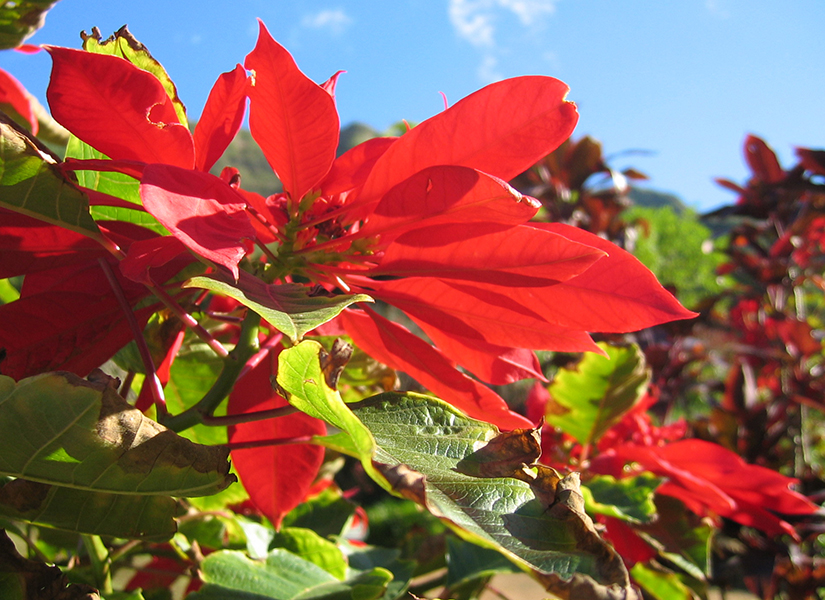 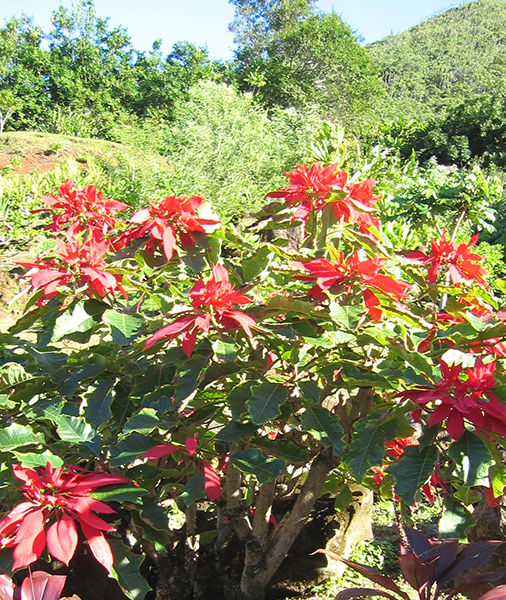 Poinsettia is a tall, rangy shrub that grows to a height of 10 ft (3.1 m). It has large, dark green, oval leaves that are "toothed" on the sides and pointed at the tips. They emerge from smooth,green erect stems. Flowers(or cyathia) are borne at the stem tips in winter. The actual flowers are quite small (they are the yellow structures at the center of the brilliantly colored "bracts"). The bracts are actually modified leaves-in the species there usually are 8 to 10 bracts that are 4-7 in (10.2-17.8 cm) long. The showy colored part of poinsettias that most people think are the flowers are actually these colored bracts (modified leaves). Many plants in this family ooze a milky sap.
Scheper, J. 1998 and Christman, S. 1999.)

During the 14th-16th century the sap of Poinsettia was used to control fevers.

Although many species in the genus Euphorbia are highly toxic, Poinsettia is not among them. The toxic compounds are diterpene esters found in the milky latex, but they have very low toxicity. If ingested may induce occasional abdominal pain with vomiting and diarrhea. Frequent contact with skin may cause redness, swelling and blisters lasting only for a few minutes.
(Russell, A. 1997.)

During the 14th-16th century the bracts (modified leaves) were used to make a reddish dye.
Montezuma, the last of the Aztec kings, would have Poinsettias brought into what now is Mexico City by caravans, because Poinsettias could not be grown in the high altitude.


Poinsettia is native to the tropical areas of Central America and Mexico.
They are now grown and enjoyed nearly worldwide, wherever Christmas is celebrated.

Poinsettias have been introduced into the United States in 1825 by Joel Poinsett. Joel Roberts Poinsett was the first United States Ambassador to Mexico being appointed by President Andrew Jackson in the 1820's. During his stay in Mexico he wandered the countryside looking for new plant species. In 1828 he found a beautiful shrub with large red flowers growing next to a road. He took cuttings from the plant and brought them back to his greenhouse in South Carolina. Even though Poinsett had an outstanding career as a United States Congressman and as an ambassador he will always be remembered for introducing the Poinsettia into the United States.
The botanical name, Euphorbia pulcherrima, was assigned to the Poinsettia by the German botanist, Wilenow. The plant grew through a crack in his greenhouse. Dazzled by its color, he gave it the botanical name, Euphorbia pulcherrima meaning "very beautiful".

In honor of the beauty of this flower, December 12th has been declared the National Poinsettia Day.
(Wolford, R. 2003.)

The Legend of the Poinsettia:
A charming story tells us of Pepita, a poor Mexican girl who had no gift to present the Christ Child at Christmas Eve Services. As Pepita walked slowly to the chapel with her cousin Pedro, her heart was filled with sadness rather than joy. "I am sure, Pepita, that even the most humble gift, if given in love, will be acceptable in His eyes", said Pedro consolingly. Not knowing what else to do, Pepita knelt by the roadside and gathered a handful of common weeds, fashioning them into a small bouquet. Looking at the scraggly bunch of weeds, she felt more saddened and embarrassed than ever by the humbleness of her offering. She fought back a tear as she entered the small village chapel. As she approached the alter, she remembered Pedro's kind words: "Even the most humble gift, if given in love, will be acceptable in His eyes." She felt her spirit lift as she knelt to lay the bouquet at the foot of the nativity scene. Suddenly, the bouquet of weeds burst into blooms of brilliant red, and all that saw them were certain that they had witnessed a Christmas miracle right before their eyes. From that day on, the bright red flowers were known as the Flores de Noche Buena, or Flowers of the Holy Night, for they bloomed each year during the Christmas season.
(Unknown Author)


We currently have 5 herbarium specimens for Euphorbia pulcherrima in our collection. Click on any specimen below to view the herbarium sheet data.