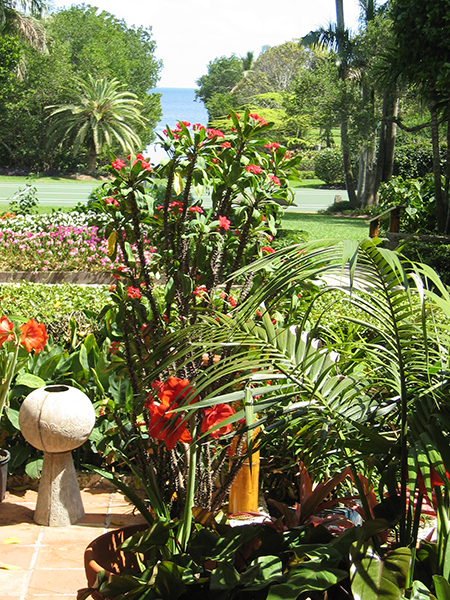 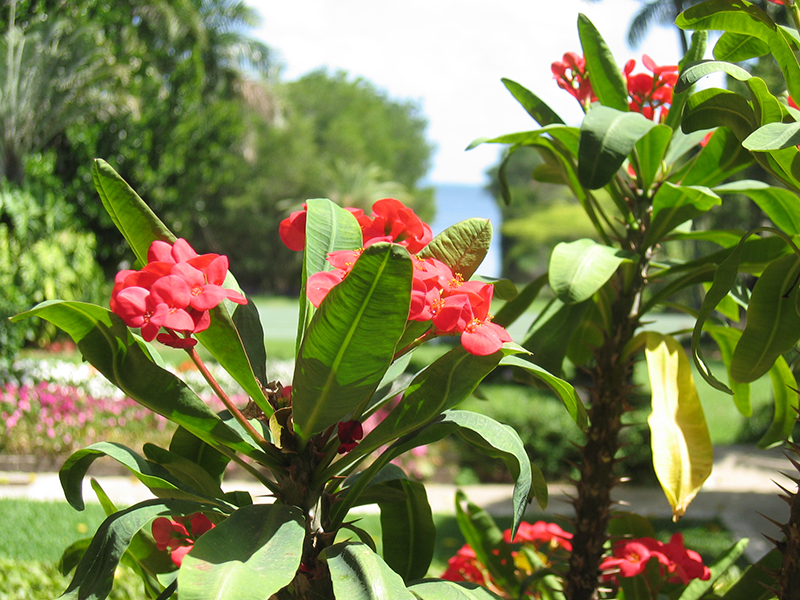 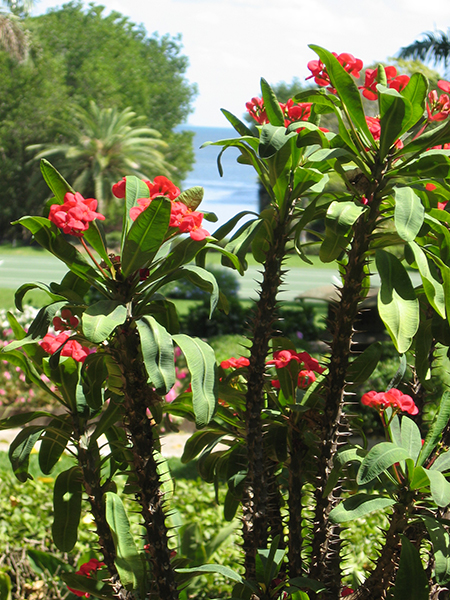 
Crown of Thorns, Euphorbia milii is a succulent plant growing 5 to 6 feet tall. The woody stems are greyish brown, branched and with many prominent grey spines. The thick fleshy leaves are arranged in spiral and they are bright green to greyish green, oval shaped with a smooth edge. The inflorescence is composed of a specialized structure called a cyathium comprising a cup-like involucre, within which there is a single much reduced female flower surrounded by three male flowers reduced to single stamens. The cyathia are borne in clusters (cymes) and each cyanthium has two colorful bracts. Plants are blooming year round, but are at their best in dry and sunny locations.
(John McLaughlin, John. And Garofalo, Joe. 2002. Euphorbia millii var. splendens Fact Sheet.)
(Plants and Gardens News. 2004. Vol. 19, Nr. 1.)

Euphorbia milii is native to Madagascar.

Linnaeus established the genus Euphorbia and he named it after a Greek surgeon called Euphorbus. He was the physician of Juba II, about 50 BC to 19 AD, the Roman king of a of Numidia, present day Algeria. King Juba II was the first person to find a succulent-type Euphorbia, and he named it after his physician. Euphorbus used the milky sap as an ingredient for his potions.
The name “milii” is for Baron Milius, once governor of the island of Bourbon, who introduced the species into cultivation in France in 1821.
“Splendens” means splendid.
The legend says that the crown of thorns worn by Christ at the time of his crucifixion was made from the stems of this plant. Interestingly, the stems of this plant are pliable and can be intertwined into a circle and there are substantial evidence that the species had been brought to the Middle East before the time of Christ.
(From Dr. T. Ombrello Notes, Union County College, NJ.)

(Information for this species compiled and recorded by Camelia Cirnaru, NTBG Consultant.)
The genus Euphorbia is one of the largest and most astonishingly varied of all the plant genera. It contains over 2,000 species, ranging in form and habit from diminutive groundcovers to enormous 70-foot-tall trees. They all have latex and a unique flower structure. A significant percentage is succulent and they are mostly originating from Africa and Madagascar.
(John McLaughlin, John. And Garofalo, Joe. 2002. Euphorbia millii var. splendens Fact Sheet.)
(Plants and Gardens News. 2004. Vol. 19, Nr. 1.)

We currently have 4 herbarium specimens for Euphorbia milii in our collection. Click on any specimen below to view the herbarium sheet data.