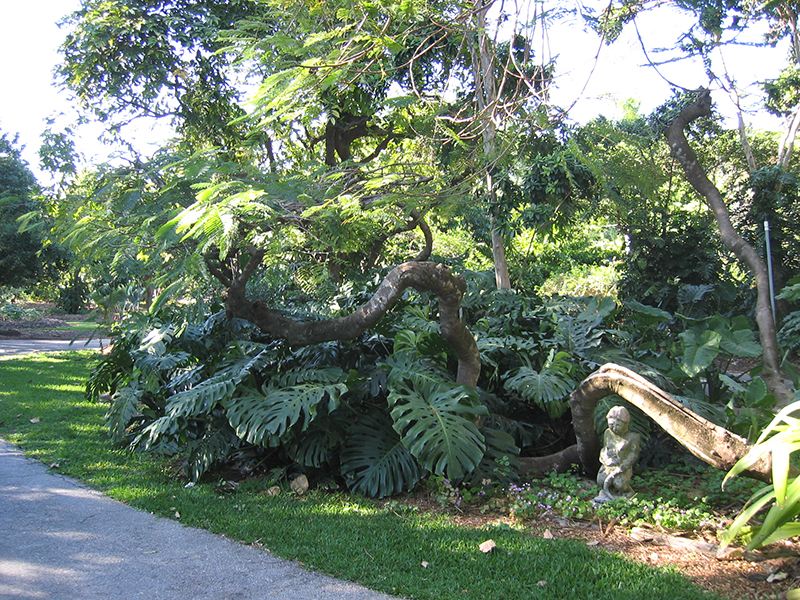 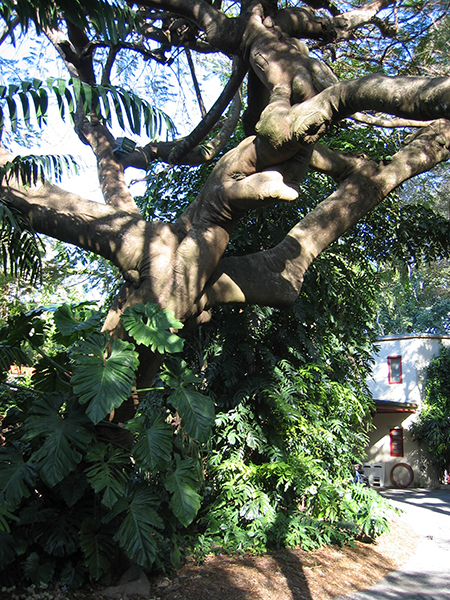 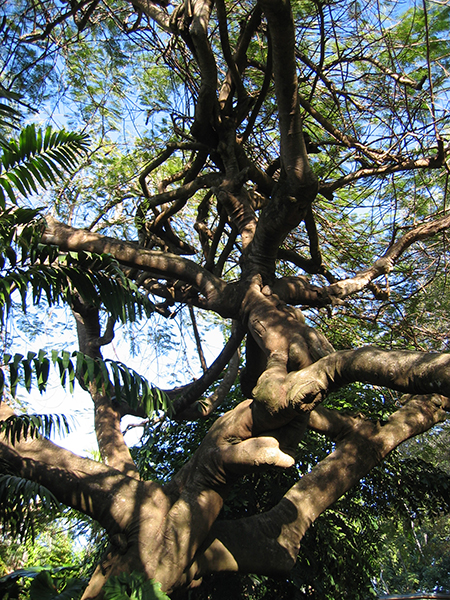 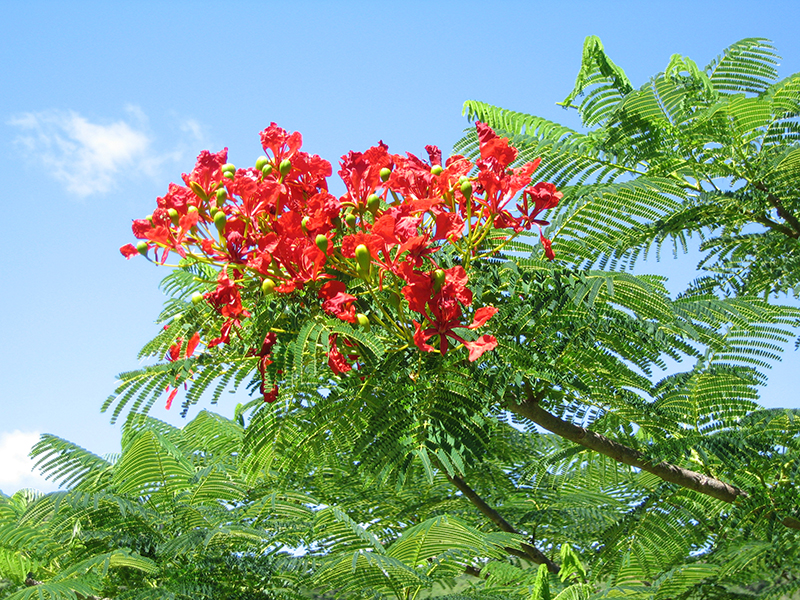 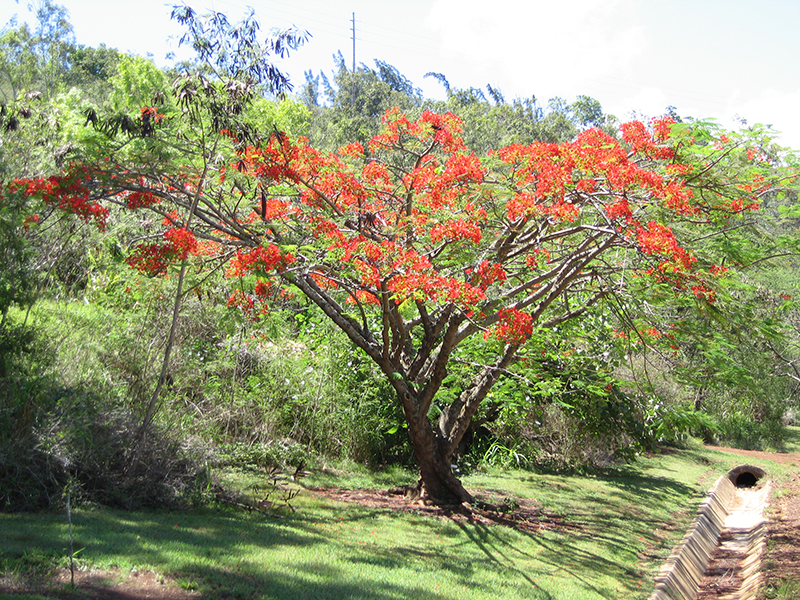 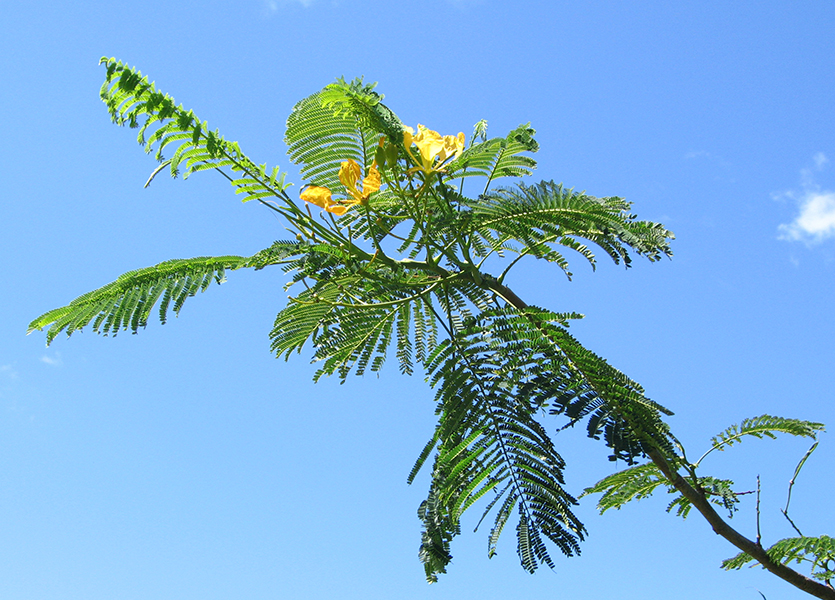 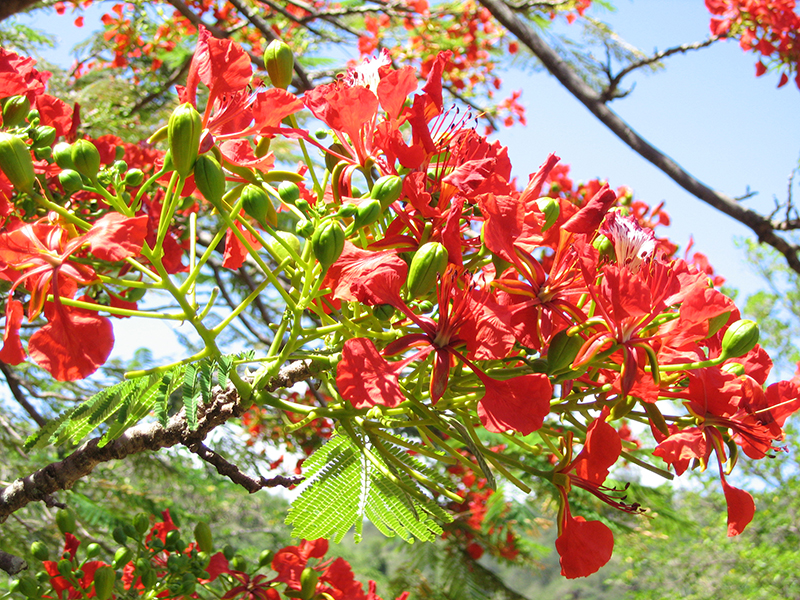 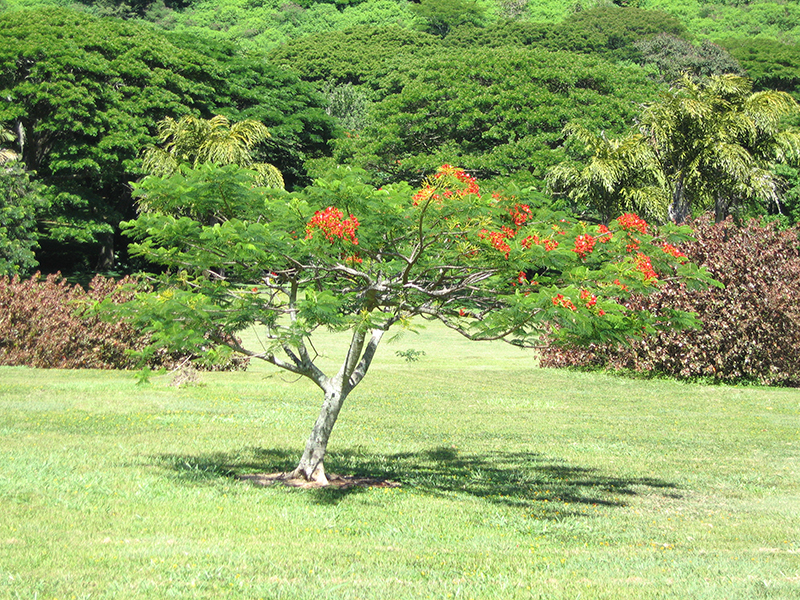 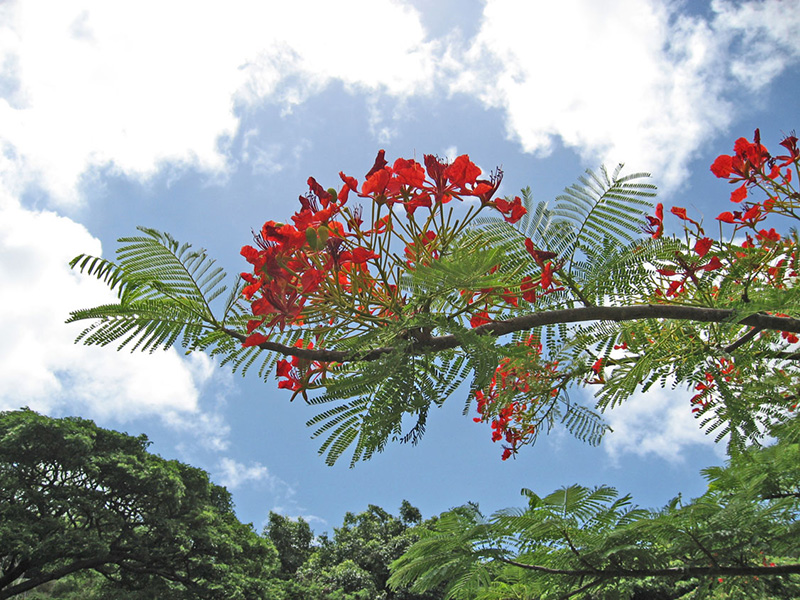 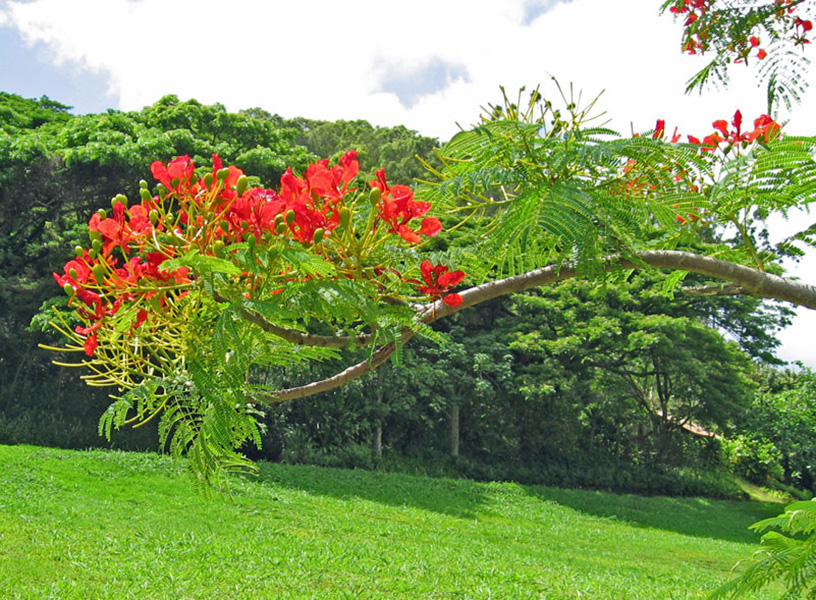 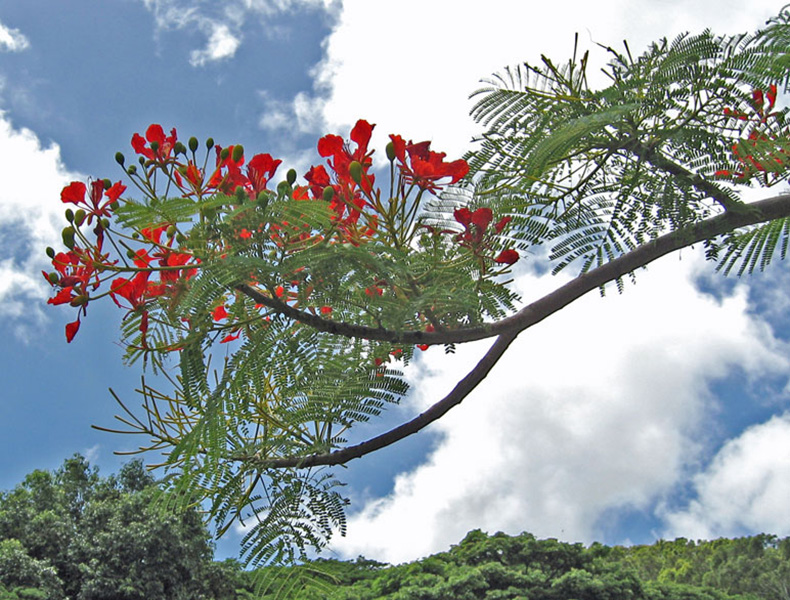 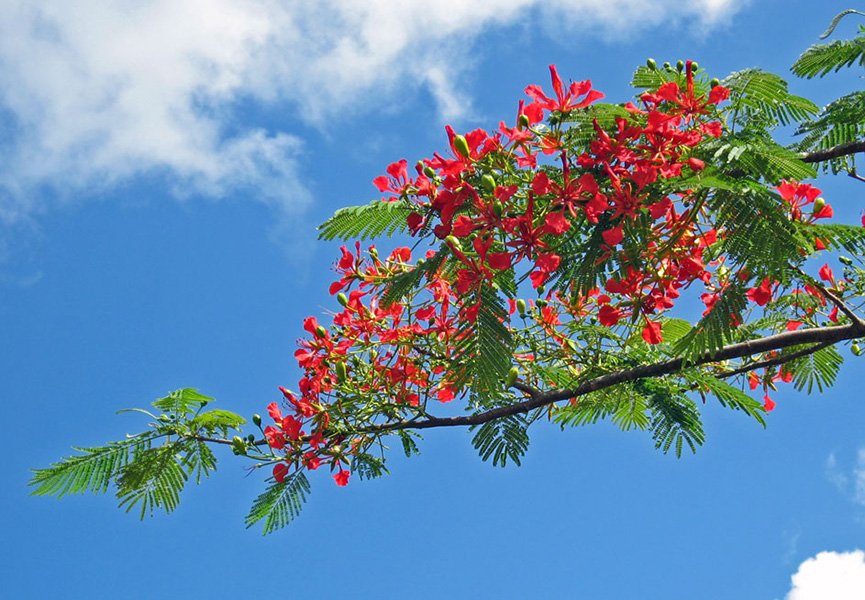 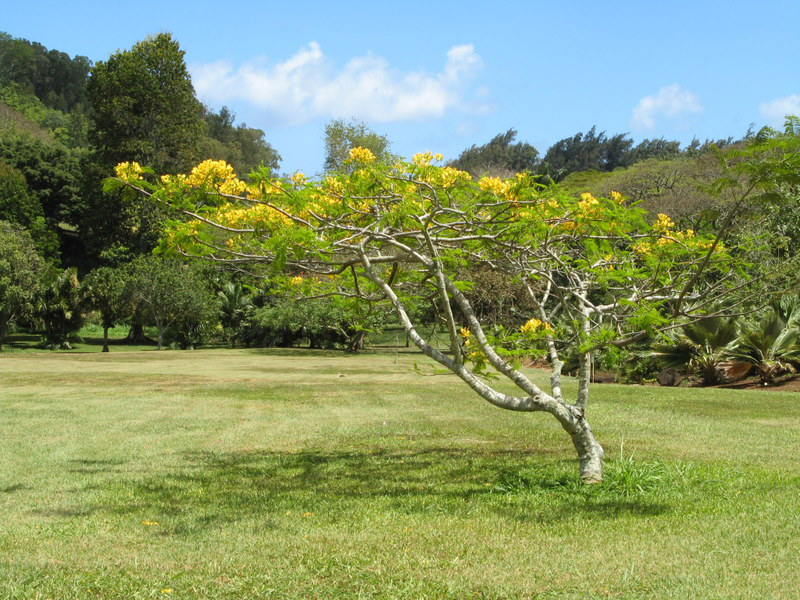 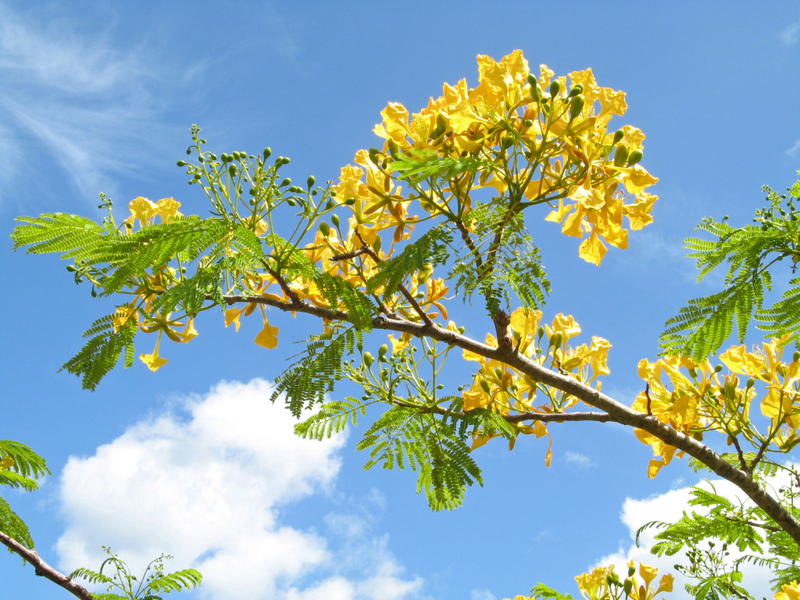 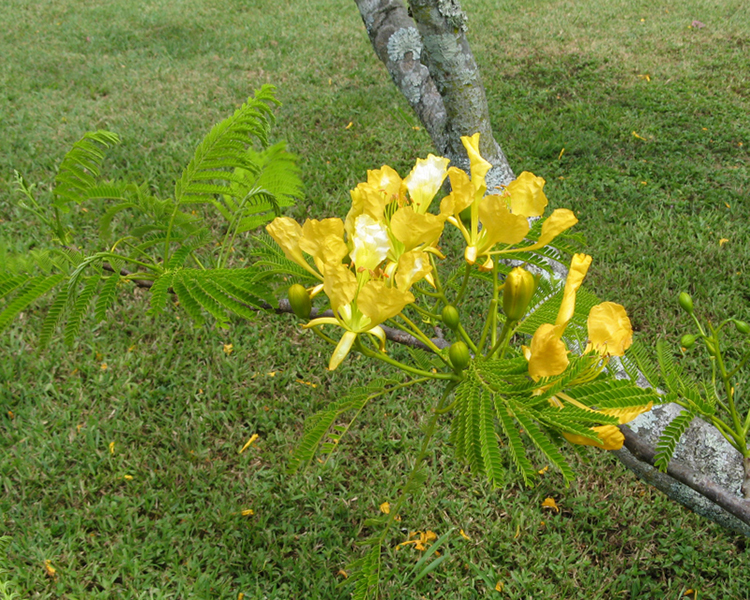 Royal Poinciana grows to 9 - 15 m in height but its elegant, wide-spreading, umbrella-like canopy can be even wider. Royal Poinciana is deciduous in climates that have a marked dry season, but in tropical areas where the winter is not that much dryer than the summer, it is a semi-evergreen tree. The leaves are feather-like, twice-pinnate, and 30.5-50.8 cm long with 11-25 pairs of primary leaflets (pinnae), each divided into 10-25 pairs of secondary leaflets (pinules). The flame-colored flowers are formed in dense clusters and bloom seasonally, usually in midsummer. Th individual flowers are between 8 and 15 cm in diamerter and have four spoon shaped spreading scarlet or orange-red petals (4-7 cm long) and one upright slightly larger petal (the standard) which is marked with yellow and white. The dark brown pods are flat and woody, up to 70 cm long and 7 cm wide. They contain between 18-45 yellowish to dark brown seeds that are about 2 cm long.
(Wagner, W.L., D.R. Herbst and S.H. Sohmer. 1999. Manual of the Flowering Plants of Hawai'i.)
(Smith, A. C. 1985. Flora Vitiensis Nova)

In the Caribbean Islands the pods are used for fuel and called "woman's tongue" because of the rattling noise they make when the wind blows them (a couple other species share this nickname for the same reason).
Royal Poinciana is a spectacular shade tree in tropical climates. As a free standing specimen tree, it has no peers. Royal Poinciana tolerates salty conditions and can be grown near the coast, but not in openly exposed beach conditions. Royal Poinciana tolerates hard pruning and can be kept at a small size, and even grown in the greenhouse.
(Wagner, W.L., D.R. Herbst and S.H. Sohmer. 1999. Manual of the flowering plants of Hawai'i)
(Smith, A. C. 1985. Flora Vitiensis Nova)


Royal Poinciana is native to Madagascar, but is now rare in the wild. It is widely cultivated and may be seen adorning avenues, parks and estates in tropical areas throughout the world.
(Wagner, W.L., D.R. Herbst and S.H. Sohmer. 1999. Manual of the flowering plants of Hawai'i)
(Smith, A. C. 1985. Flora Vitiensis Nova)
The tree was named for an 18th century governor of the French West Indies, M. de Poinci.
In Spanish it is sometimes referred to as Arbol de Fuego (Tree of Fire). In Mexico, Costa Rica and elsewhere in Central America it is referred to as Malinche after a beautiful young Indian woman of that name. Malinche is said to have been so beautiful that she persuaded Hernan Cortez, who fell in love with her, to spare her people from extermination at the hands of the conquistadors.

The Royal Poinciana is a magnificent tree, consistently voted among the top five most beautiful flowering trees in the world. The species is related to the Tamarind and Mimosa Tree. It is so loved in Miami (Florida) that they have an annual festival to celebrate its flowering.
(Wagner, W.L., D.R. Herbst and S.H. Sohmer. 1999. Manual of the flowering plants of Hawai'i)
(Smith, A. C. 1985. Flora Vitiensis Nova)

We currently have 13 herbarium specimens for Delonix regia in our collection. Click on any specimen below to view the herbarium sheet data.