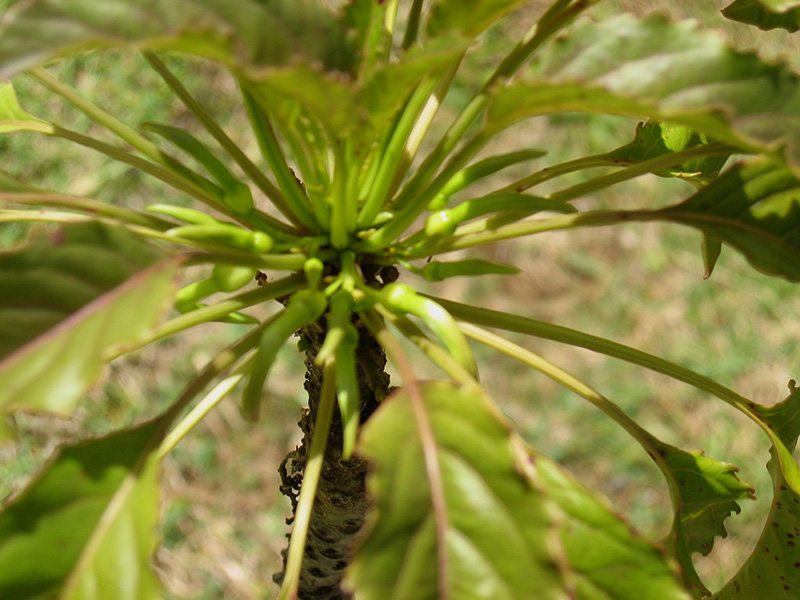 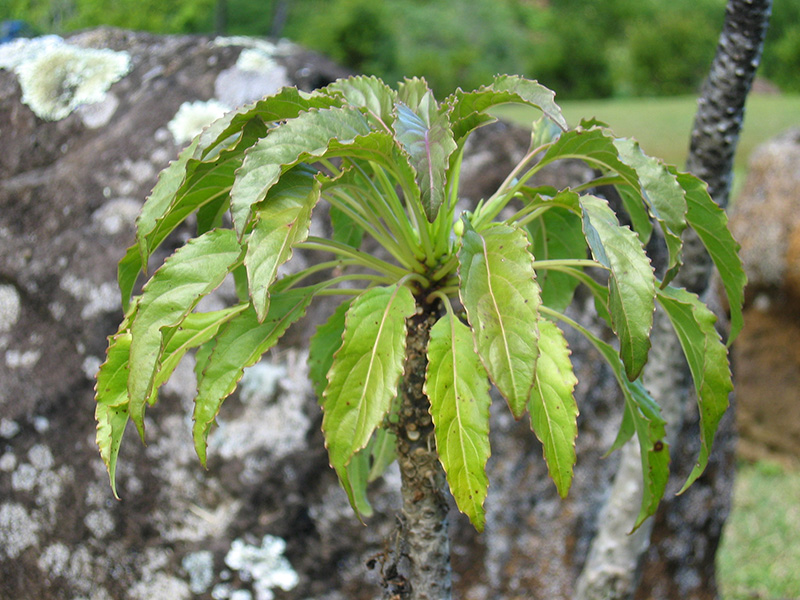 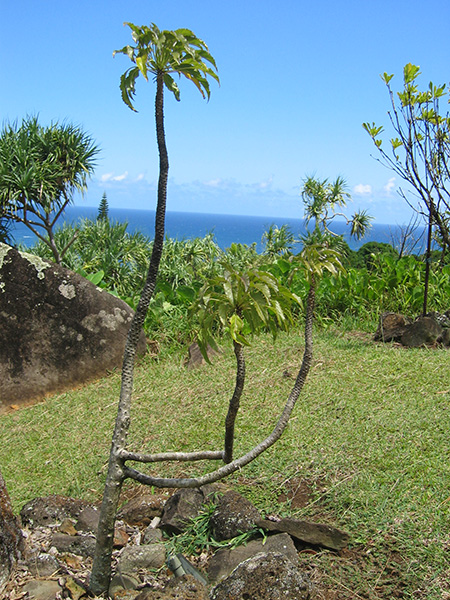 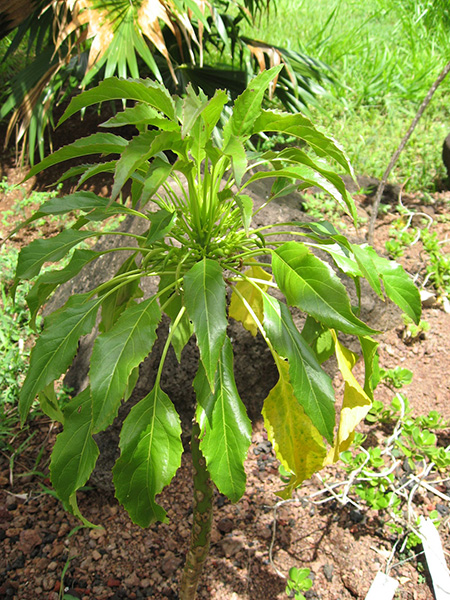 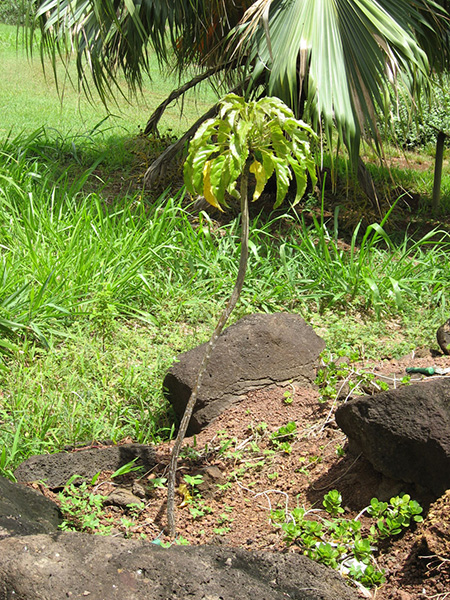 
Delissea rhytidosperma is a shrub that grows from 0.5-2.5 m tall. The leaves are alternately arranged and both leaves and flowers are largely restricted to the upper portions of the stem. The leaves are lanceolate or lance-shaped; meaning the leaves are long (9-19 cm long), widest at the base (2-5.5 cm wide), and gradually narrowing to the tip. The leaves are distinctive as the margins have small teeth that are either rounded or pointed with the tip of the serrations pointing towards the top of the leaf. The stalks of the leaves can be quite long reaching from 2-11 cm in length.
Delissea rhytidosperma inflorescences contain 5-12 greenish-white flowers that may be tinged with violet. The flowers have bilateral symmetry meaning that only a single line can be drawn that divides the flower so that the two halves are a mirror image of each other. The flowers are 14-20 cm long and may be slightly downcurved. The petals are united along their entire length to form a tube with a single split on the underside through which the anthers (male or pollen producing flower structures) and pistil (female or ovule producing flower structures) can be seen. The anthers have small tufts of hairs at the base of the stamens (in which pollen is produced). The flowers of all Delissea species have small bumps at the base of the split in the petals and some species have additional bumps that form on other portions of the petals. The calyx (a series of green petal like structures found outside of the petals) and corolla (petals) are fused and at the base of the flower and these structures partially enclose the ovary inside which the seeds are produced. The fruit of this species is a dark purple berry that is round and 7-12 mm long. The fruit contains many seeds that are white in color and wrinkled on the surface. These wrinkles have to be observed through a hand lens or microscope as the seeds are only 0.7-1.5 mm long!

The remaining individuals of this species are currently monitored and protected in efforts to increase the population size of this species. The plants are protected by fences that were erected to exclude feral ungulates (mule or black-tailed deer and goats) and prevent trampling by feral pigs. These exclosures are regularly weeded to remove non-native understory species to reduce the build-up of plant material that may fuel forest fires. Other non-native species that may compete with these plants, including Lantana (Lantana camara), Sweet granadilla (Passiflora ligularis), and Banana poka (Passiflora mollissima), are also removed.
The plants are regularly monitored and have recently produced flowers, fruit and seeds. Delissea rhytidosperma individuals have been grown in the Kokee Rare Plant Facility for outplanting in suitable sites within the historical range of this species. Botanical surveys in the Kuia and Kawaiula valleys have been carried out in attempts to locate additional Delissea populations. Ex-situ populations are maintained at Limahuli Garden and Preserve which is part of the National Tropical Botanical Garden.

Delissea rhytidosperma is endemic to Kaua`i and was historically found throughout the island in diverse mesic forest and Koa (Acacia koa) dominated lowland dry forests at elevations between 300-1000m. It is currently represented by six individuals in Kuia Gulch in Kuia Natural Area Reserve and the Na Pali-Kona Forest Reserve. The genus Delissea is endemic to Hawai`i and contains 9 species of which only two, Delissea rhytidosperma and Delissea subcordata, are extant with the other seven species currently considered extinct.
(Wagner, W. L., Herbst, D. R., and S. H. Sohmer. 1999. Manual of the Flowering Plants of Hawai`i. Revised Edition. Volume 1. Bishop Museum Special Publication 97. University of Hawai`i Press, Bishop Museum Press, Honolulu, Hawai`i.)

Delissea rhytidosperma is federally listed as endangered as it is currently represented by six individuals in Kuia Natural Area Reserve on Kaua`i and the Na Pali-Kona Forest Reserve. Other historical populations no longer exist: including a single plant in Limahuli Valley and five individuals in Haupu Range.

Seeds of Delissea rhytidosperma have been tested by the Center for Conservation Research (CCRT), the National Seed Storage Laboratory (NSSL), and the National Tropical Botanical Garden (NTBG), finding that they can tolerate freezing and drying.

We currently have 19 herbarium specimens for Delissea rhytidosperma in our collection. Click on any specimen below to view the herbarium sheet data.