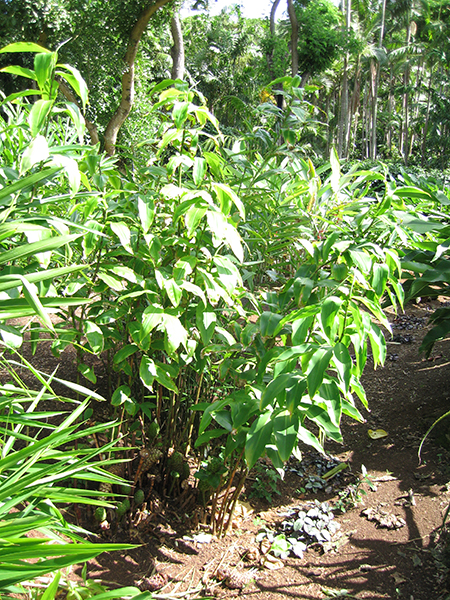 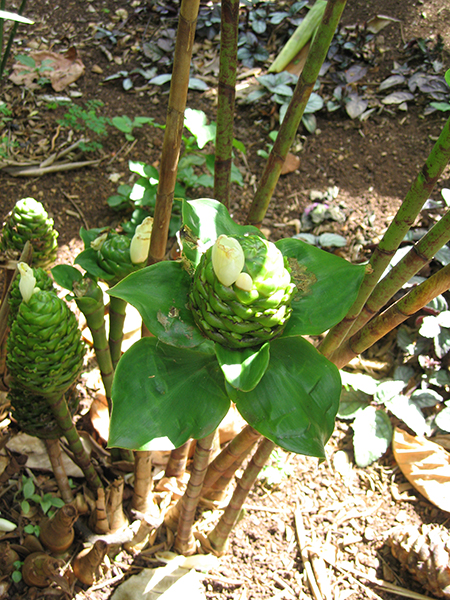 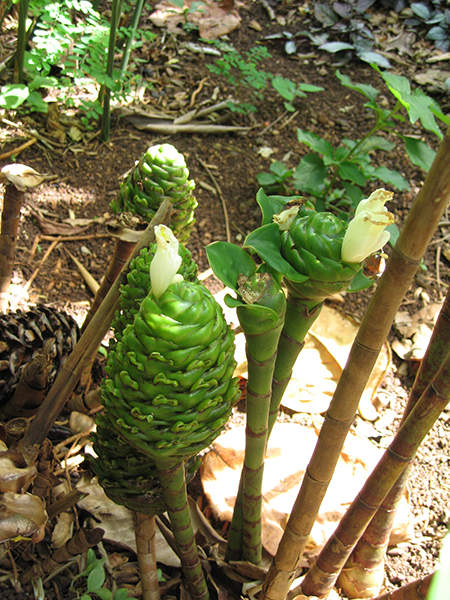 
Costus dubius, is known by the common name Spiral flag, which describes the twisted or spiral arrangement of the leaves on the stems of this species. Plants grow up to 3.5 m high with oval leaves that are arranged spirally along the stem. Costus plants reproduce vegetatively by the production of underground stems known as rhizomes, and can also grow from stems that fall over on the ground. The flower stalks develop from buds on the underground stems, and this species produces many inflorescences that form dense clusters at the base of the plant. All Costus species produce flowers in tightly arranged inflorescences with green or colorful bracts surrounding the flowers. In this species the bract is green and contains a single white flower with yellow spot at the base of the petal. The fruit of Costus dubius produces many small seeds and can establish and spread quickly.

The rhizome of Costus speciosa, which is native to Southeast Asia, is utilized in Ayurvedic medicine to treat fever, rash, asthma, bronchitis, and intestinal worms. The species Costus spiralis is used in Brazilian folk medicine for the treatment of the urinary stones. An extract of this species has been shown to reduce the size of urinary stones in laboratory experiments.

(Viel, T.A. et al. 1999. Evaluation of the antiurolithiatic activity of the extract of Costus spiralis Roscoe in rats. Journal of ethnopharmacology 66(2): 193-198.)

Costus is a large genus containing 90 species that are found in all tropical regions of the world with high diversity in the African and American tropics. Costus dubius is an African species that is native to Camaroon and Tanzania.

Costus flowers contain nectar producing structures on the bracts to attract a range of pollinators. Some Costus species are associated with a wide range of generalist pollinators and tend to have open flowers in which the nectar and pollen are easily accessible. Other species are associated with specialist pollinators such as birds and bees and these have more narrow, tubular flowers in which access to the nectar and pollen is more restricted.

We currently have 4 herbarium specimens for Costus dubius in our collection. Click on any specimen below to view the herbarium sheet data.