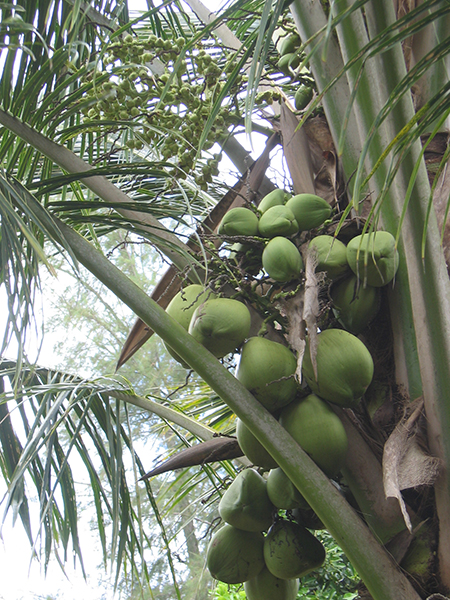 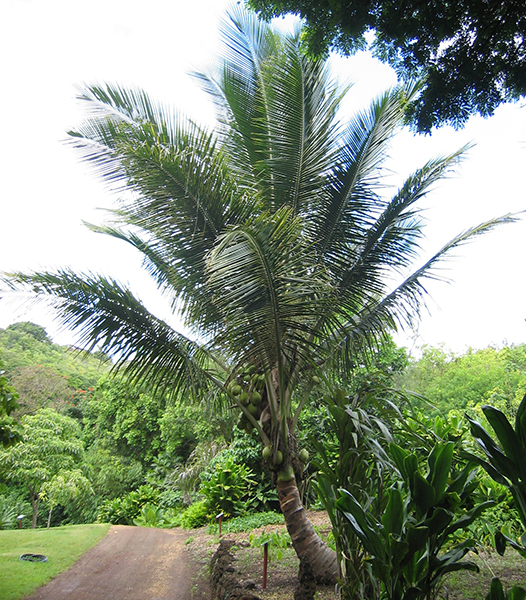 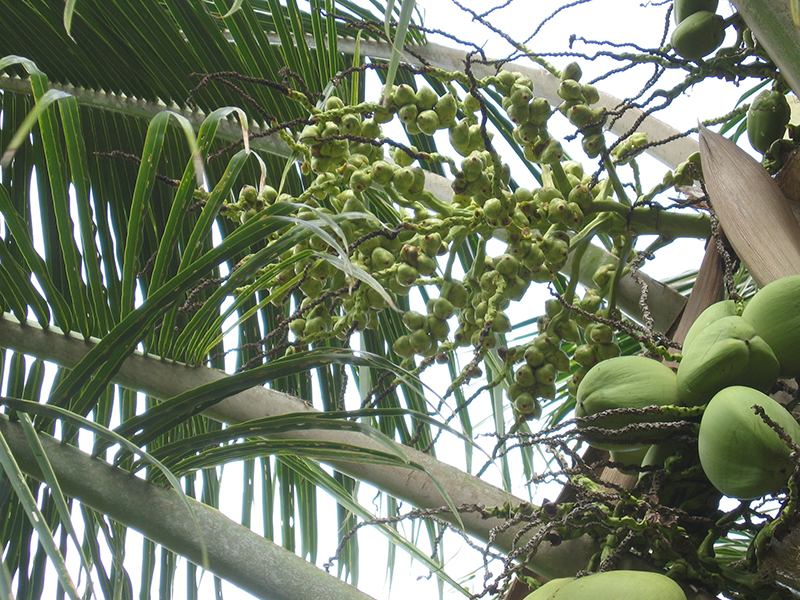 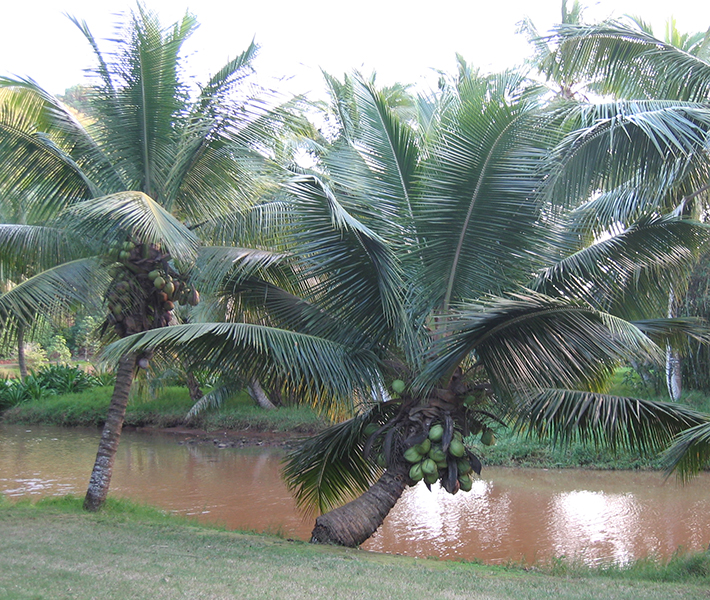 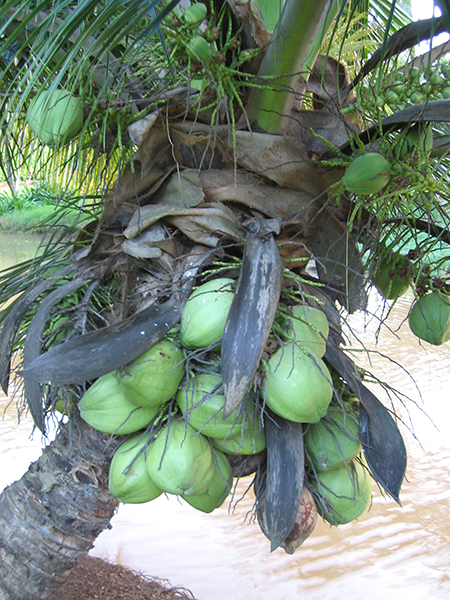 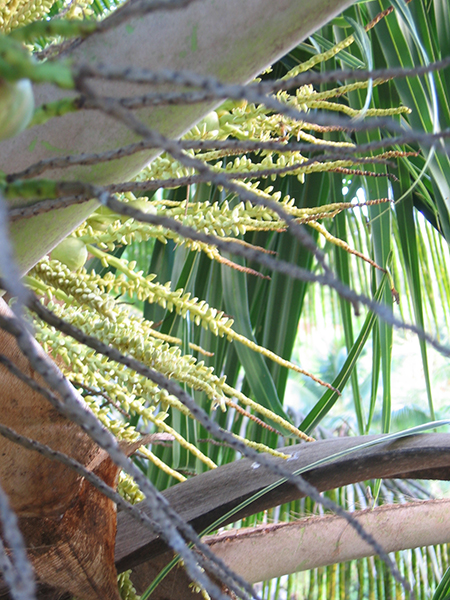 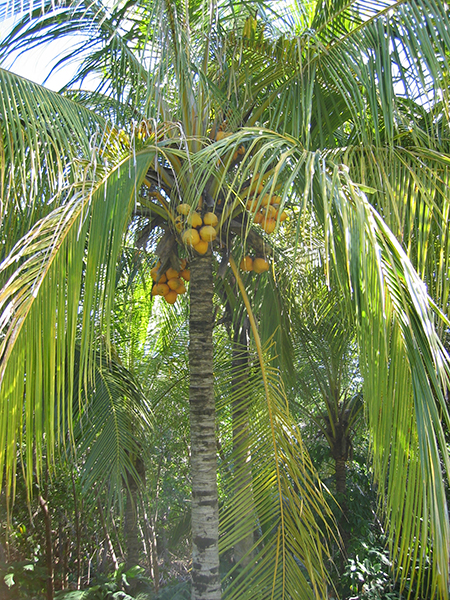 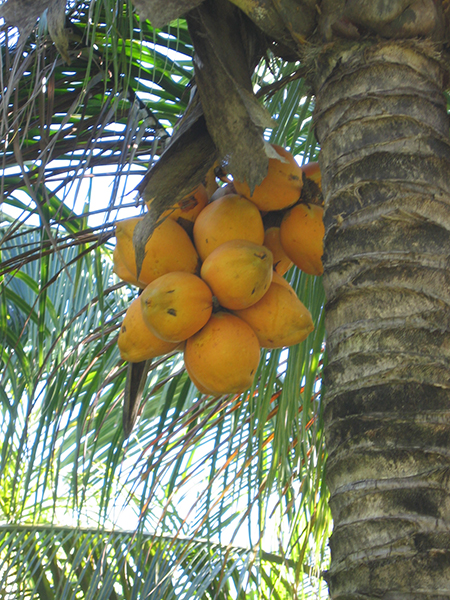 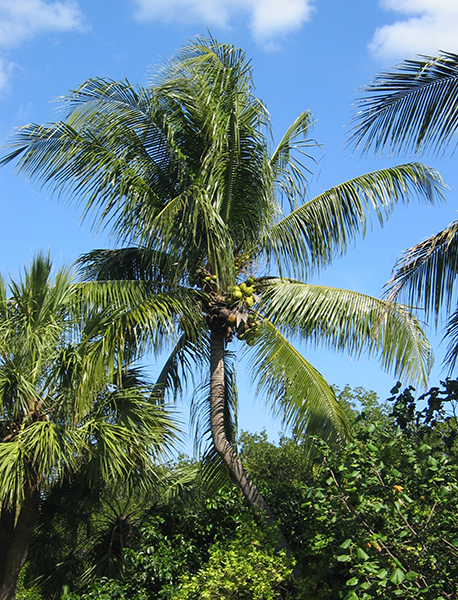 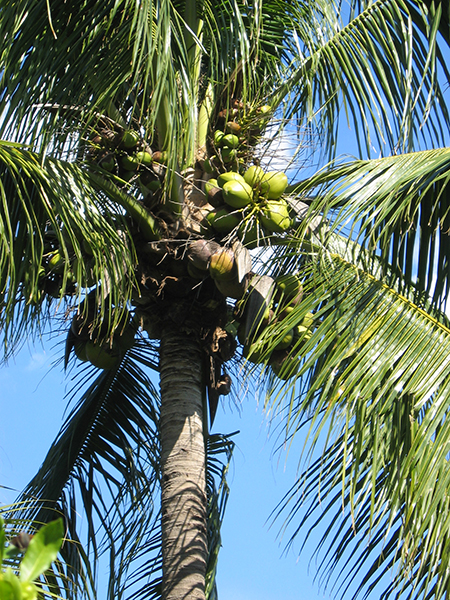 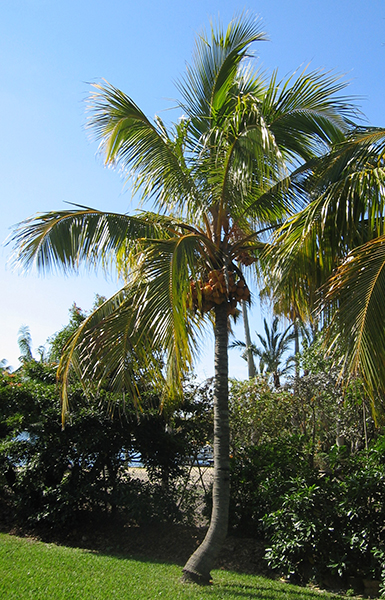 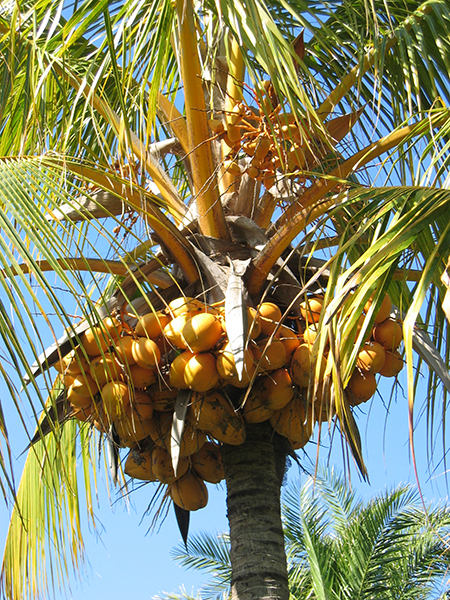 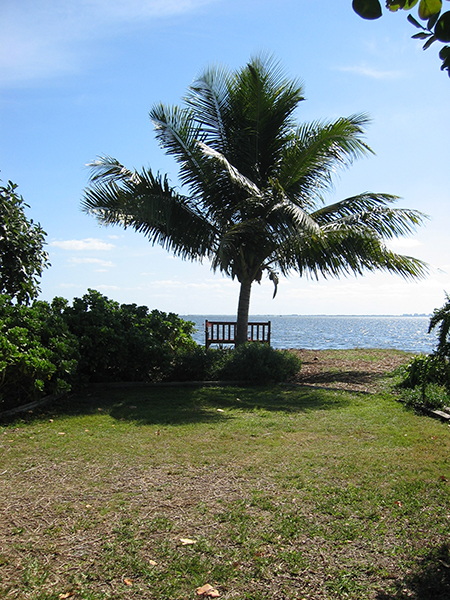 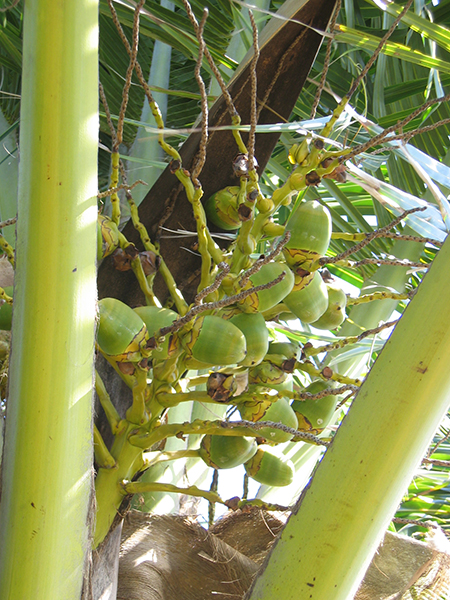 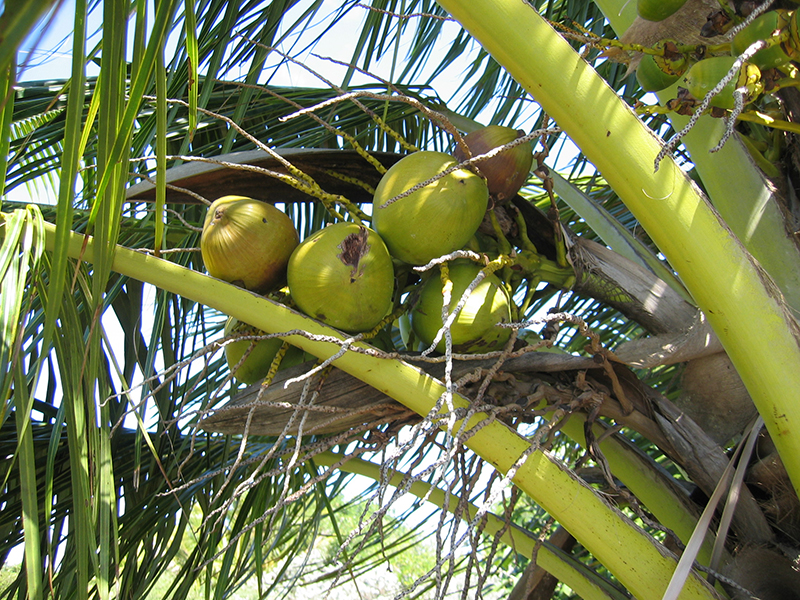 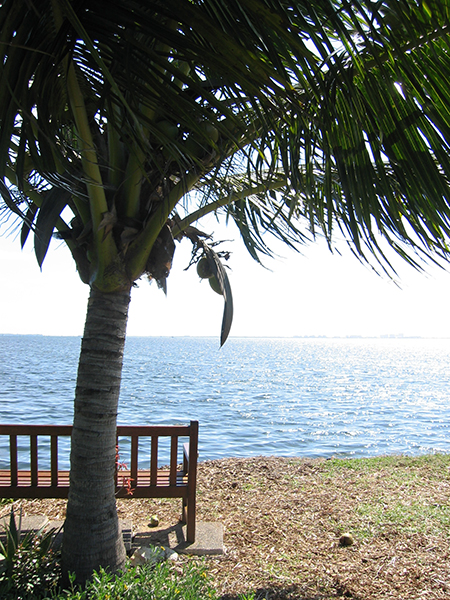 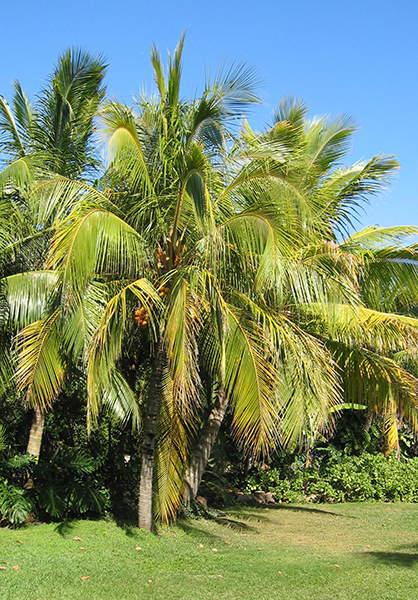 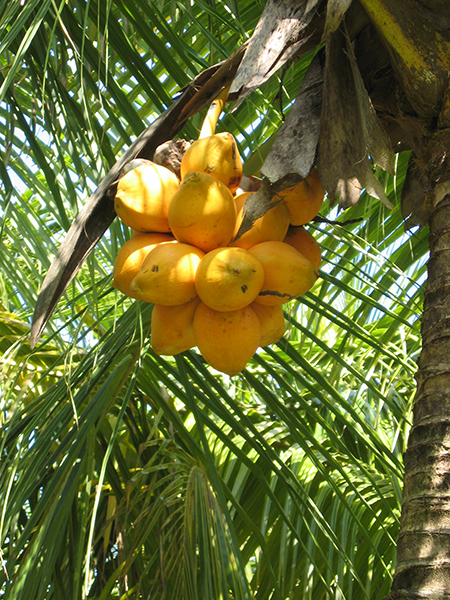 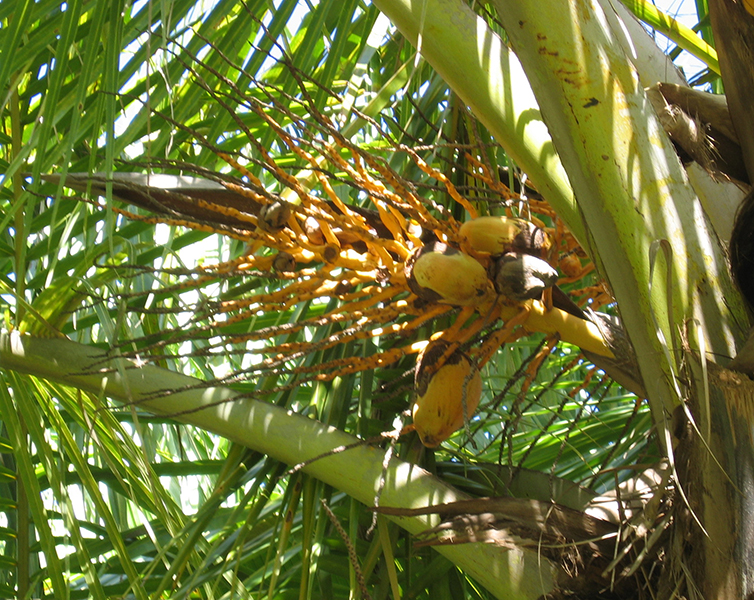 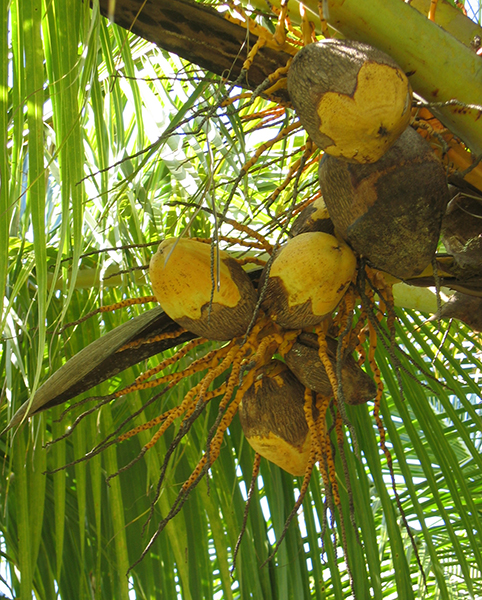 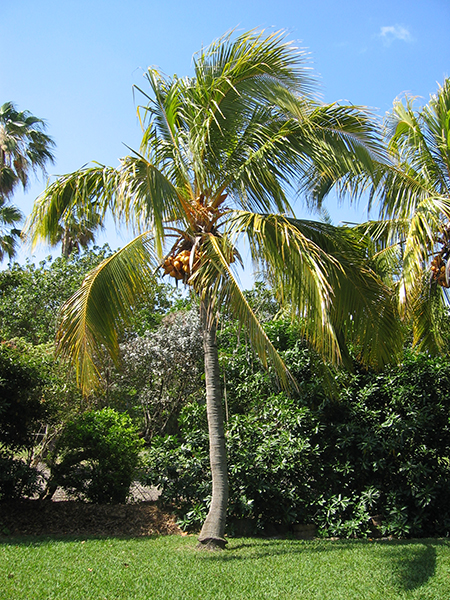 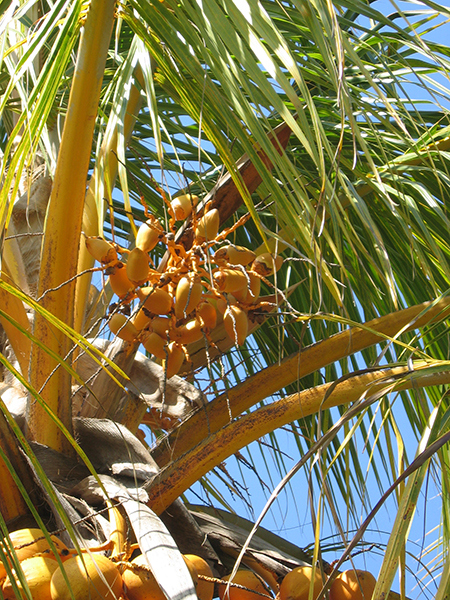 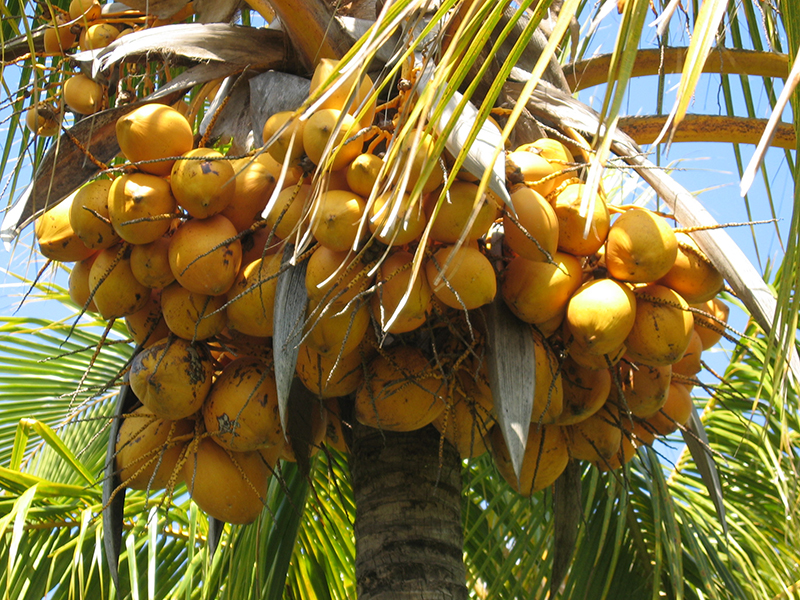 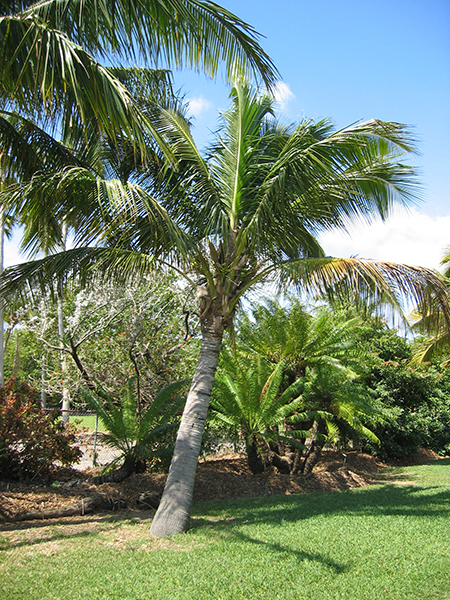 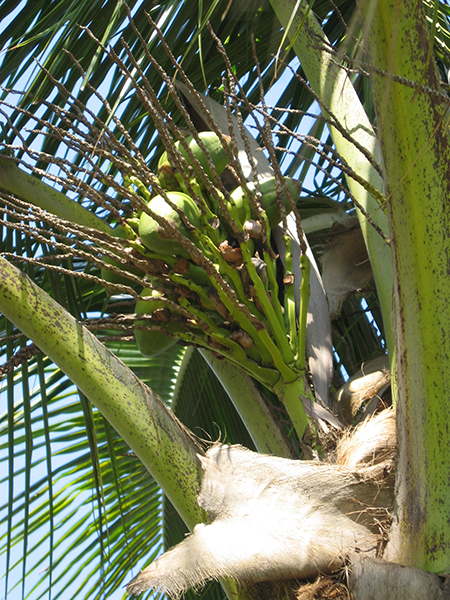 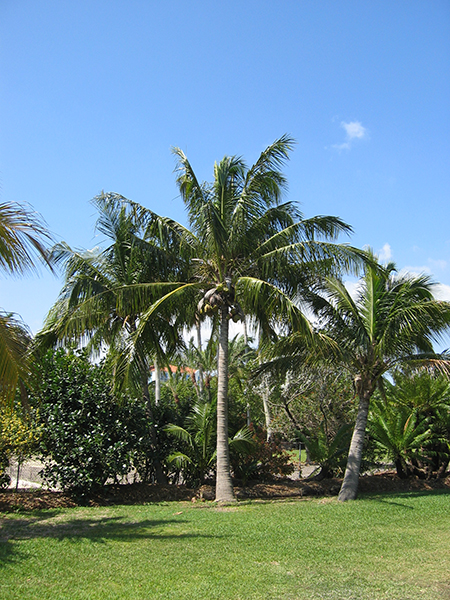 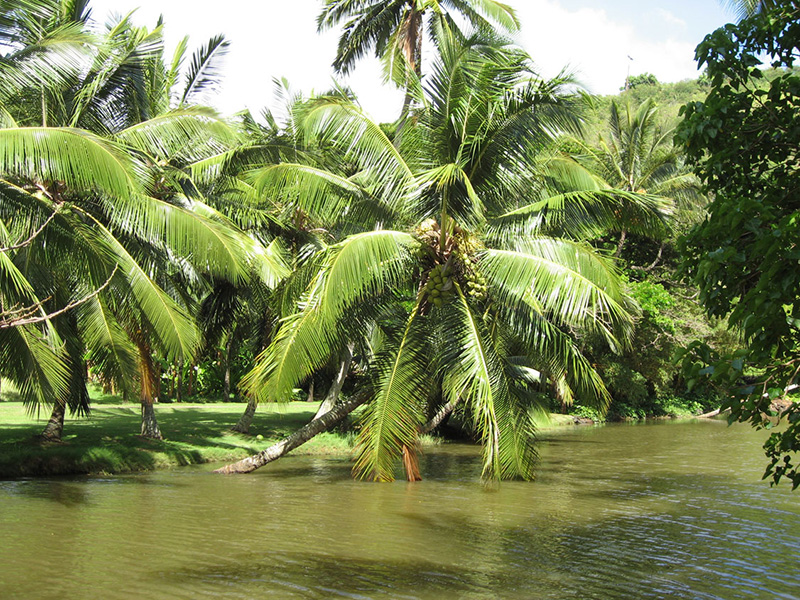 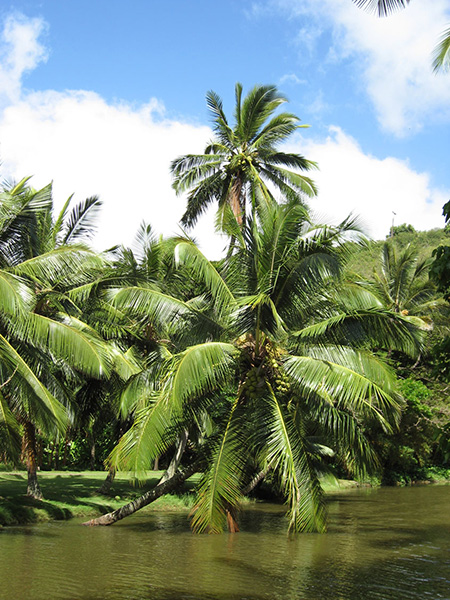 The Coconut Palm is a long-lived plant that may live as long as 100 years. It has a single trunk, 20-30 m tall, its bark is smooth and grey, marked by ringed scars left by fallen leafbases. The leaves, from 4 to 6 m long, are pinnate. They consist of linear-lanceolate, more or less recurved, rigid, bright green leaflets. The inflorescences, arising at leaf axils and enveloped by a carinate spathe, are unbranched spadices; female flowers are borne basally, male flowers at apex. Flowers bear lanceolate petals, 6 stamens and an ovary consisting of 3 connate carpels. Cross pollination, either anemophilous or entomophilous, occurs. Its fruit, as big as a man's head and 1-2 kg in weight, is a drupe with a thin, smooth, grey-brownish epicarp, a fibrous, 4-8 cm thick, mesocarp and a woody endocarp. As it is rather light, it can be carried long distances by water while keeping its germinability for a long time. Inside it contains one seed, rich in reserve substances located in the endosperm which is partly liquid (coconut milk), partly solid (flesh). When its embryo germinates, its radicle breaks through one of the three germinating pores, visible from the outside as well.

Medicinally, a small piece of Coconut meat (called copra) was chewed following the ingestion of disagreeable tasting medicines. Fishermen also chewed the meat and spit the oil onto the water, to produce a glossy calm place, smooth enough to spot the fish below the surface. (Krauss, B. H. 1993. Plants in Hawaiian Culture.) (Kepler, A. K. 1998. Hawaiian Heritage Plants.)

Coconut leaves are used to make baskets, roofing thatch. The apical buds of adult plants are an excellent palm-cabbage, an alcoholic drink known as Toddy or palm wine extracted from its sugar sap, tapped from the inflorescence by means of apposite cuttings. The trunk is very strong and elastic, and is able to bend in heavy winds. In times of hurricanes the Coconut Palm has been a life-saver. People lashing themselves to this flexible tree have avoided being swept out to sea. This palm is the most useful plant of the tropics. It is said that more uses are made of it than any other tree in the world. Besides drink, food and shade, Niu offers the possibilities of housing, thatching, hats, baskets, furniture, mats, cordage, clothing, charcoal, brooms, fans, ornaments, musical instruments, shampoo, containers, implements and oil for fuel, light, ointments, soap and more. (Krauss, B. H. 1993. Plants in Hawaiian Culture.) (Kepler, A. K. 1998. Hawaiian Heritage Plants.) (Information for this species compiled and recorded by Camelia Cirnaru, NTBG Consultant.)

Native to tropical eastern regions, today it is grown both over the Asian continent (India, Ceylon, Indonesia) and in Central and South America (Mexico, Brazil). In Africa, the largest producing countries are Mozambique, Tanzania and Ghana. (Krauss, B. H. 1993. Plants in Hawaiian Culture.) (Kepler, A. K. 1998. Hawaiian Heritage Plants.)

This tree is strong, resilient and can provide us with our most basic need for life - water! The most sterile water on earth is found in this nut. There are stories of island and coastal people surviving months of drought with Coconut water as the only source of drinking water available. The perfect drinking nut is full-sized, yet immature. It is green, with no trace of yellow color, and it must be picked. Up to one quart of water is inside, but you can't hear it when you shake it. The yellow or browning Coconut is mature when it drops to the ground. There is still some water in the cavity, which can be combined to make Coconut milk. Coconut milk is a blend of coconut water and the scrapings of the coconut meat. This milk is a good source of iron and contains calcium, phosphorus, protein and vitamins. Coconut water, like the Taro, is an alkali producer in the digestive system and therefore helps in the important balancing of pH in the human body. Often, a too acidic body is prone to disease, whereas if the pH is balanced with alkaline-producing foods, the body is more prone to stay in good health. As food, the Niu flesh or meat is used for different purposes, depending upon the maturity of the nut. The jelly-like spoon meat of a green nut is the first stage. The next stage is when the shell is still white and the flesh soft and white. Half ripe it is eaten raw with Hawai'i red salt and poi. At the next stage, the nut is mature, but the husk not dried. The flesh of a mature nut mixed with Kalo (Taro) makes a dish called kulolo. With 'Uala (sweet potato) it is called poipalau and paipaiee with ripe 'Ulu (Breadfruit). These delicious dessert-like foods were traditionally cooked in the imu, the underground oven. Haupia is made with Niu cream mixed with Pia(Polynesian arrowroot), traditionally wrapped in Ti leaves and baked in the imu. The mature meat of Coconut is also grated, squeezed or scraped to be cooked in main dishes with fish, chicken or greens. The Coconut heart is sometimes eaten as a vegetable. The heart is located just below the crown of leaves, and can be as long as a human leg! It keeps fresh for about two weeks. The spongy pulp, in a sprouting nut is also considered choice food. (Krauss, B. H. 1993. Plants in Hawaiian Culture.) (Kepler, A. K. 1998. Hawaiian Heritage Plants.)

The name "Cocos" comes from a Portuguese word meaning "monkey", perhaps because the nut has three germinating pores, which resembles a monkey face! Its specific Latin name derives from "fero meaning "I bear" and "nux-nucis" meaning "nut" (Krauss, B. H. 1993. Plants in Hawaiian Culture.) (Kepler, A. K. 1998. Hawaiian Heritage Plants.)

The Coconut Palm is perhaps the widest-grown palm in the world, coconuts being one of the main sources of income for producing countries because a large number of different products made out of them are utilized and appreciated in the western countries as well. (Krauss, B. H. 1993. Plants in Hawaiian Culture.) (Kepler, A. K. 1998. Hawaiian Heritage Plants.) (Magness, J.R., G.M. Markle, C.C. Compton. 1971. Food and feed crops of the United States.)

We currently have 5 herbarium specimens for Cocos nucifera in our collection. Click on any specimen below to view the herbarium sheet data.