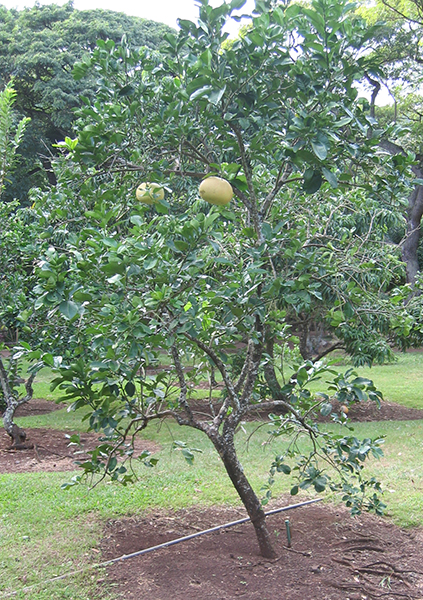 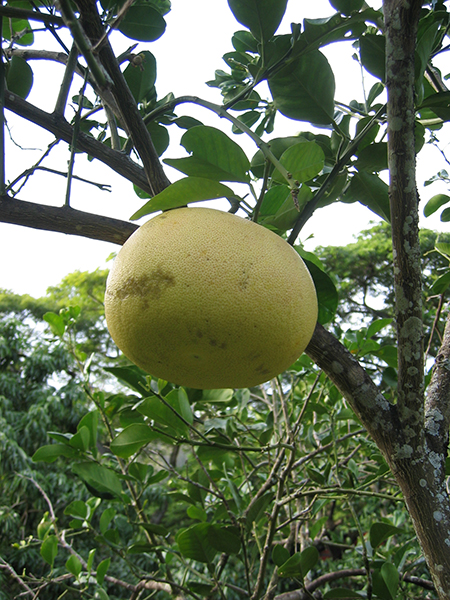 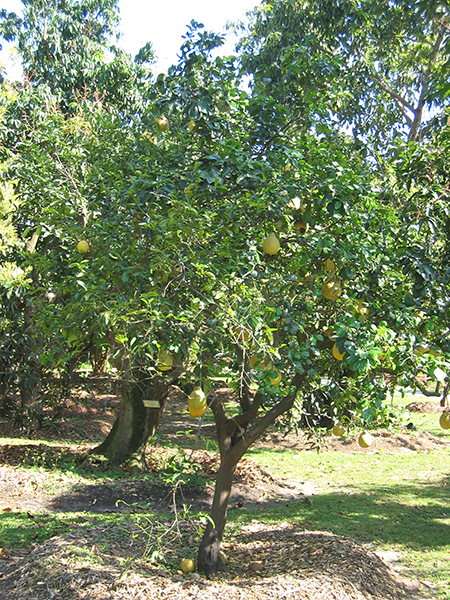 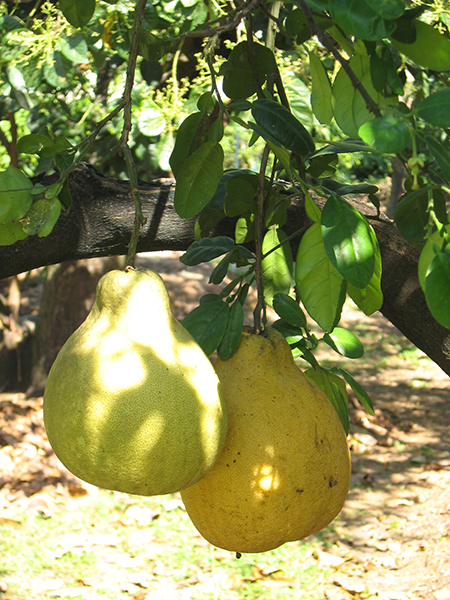 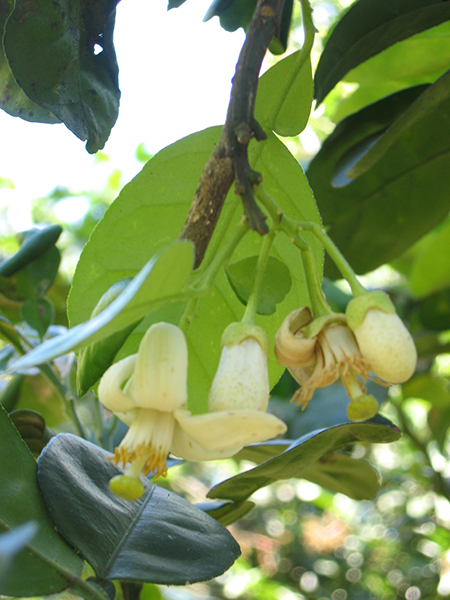 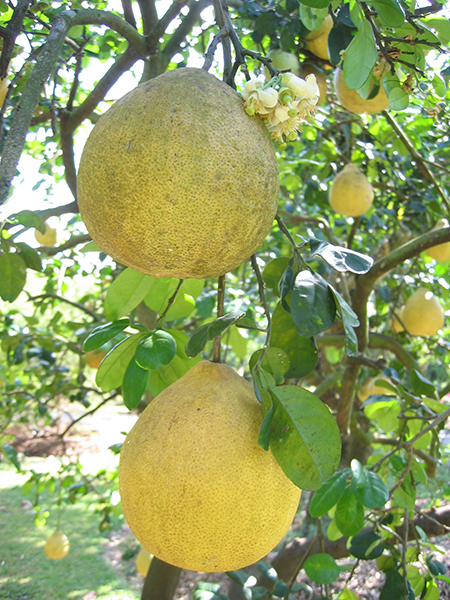 The Pomelo tree may be 16 to 50 ft (5-15 m) tall, with a somewhat crooked trunk 4 to 12 in (10-30 cm) thick, and low, irregular branches. The young branchlets are angular and often densely hairy, and there are usually spines on the branchlets, old limbs and the trunk. The leaves are alternate, ovate, ovate-oblong, or elliptic, 2 to 8 in (5-20 cm) long, 3/4 to 4 3/4 in (2-12 cm) wide, leathery, dull-green, glossy above, dull and minutely hairy beneath. The flowers are fragrant, borne singly or in clusters of 2 to 10 in the leaf axils, or sometimes 10 to 15 in terminal racemes 4 to 12 in (10-30 cm) long with 4 to 5 petals, yellowish-white, 3/5 to 1 1/3 in (1.5-3.5 cm) long, somewhat hairy on the outside and dotted with yellow-green glands. Stamens are white, prominent, in bundles of 4 to 5, anthers orange. The fruit ranges from nearly round to oblate or pear-shaped, 4 to 12 in (10-30 cm) wide. The peel, clinging or more or less easily removed, may be greenish-yellow or pale-yellow, minutely hairy, dotted with tiny green glands, 1/2 to 3/4 in (1.25-2 cm). The pulp varies from greenish-yellow or pale-yellow to pink or red and it is divided into 11 to 18 segments, very juicy to fairly dry. The segments are easily skinned and the sacs may adhere to each other or be loosely joined. The flavor of the pulp varies from mildly sweet and bland to subacid or rather acid, sometimes with a faint touch of bitterness. Generally, there are only a few, large, yellowish-white seeds, white inside, though some fruits may be quite seedy.
A Pomelo cross-pollinated by another pummelo is apt to have numerous seeds. If it is cross-pollinated by sweet orange or mandarin orange, the progeny will not be seedy.
(Morton, J. 1987. Fruits of warm climates.)

In the Philippines and Southeast Asia, decoctions of the leaves, flowers, and rind are given for their sedative effect in cases of epilepsy, chorea and convulsive coughing. The hot leaf decoction is applied on swellings and ulcers. The fruit juice is taken as a febrifuge. The seeds are employed against coughs, dyspepsia and lumbago. Gum that exudes from declining trees is collected and taken as a cough remedy in Brazil.
(Morton, J. 1987. Fruits of warm climates.)

Like that of other citrus fruits, the peel of the pummelo contains skin irritants, mainly limonene and terpene, also citral, aldehydes, geraniol, cadinene and linalool, which may cause dermatitis in individuals having excessive contact with the oil of the outer peel. Harvesters, workers in processing factories, and housewives may develop chronic conditions on the fingers and hands.
(Morton, J. 1987. Fruits of warm climates.)

The flowers of Pomelo are highly aromatic and gathered in North Vietnam for making perfume. The wood is heavy, hard, tough, fine-grained and suitable for making tool handles.
(Morton, J. 1987. Fruits of warm climates.)


The Pomelo is native to southeastern Asia and all of Malaysia and grows wild on river banks in the Fiji and Friendly Islands. It may have been introduced into China around 100 B.C. It is much cultivated in southern China (Kwang-tung, Kwangsi and Fukien Provinces) and especially in southern Thailand on the banks to the Tha Chine River. Also in Taiwan and southernmost Japan, southern India, Malaya, Indonesia, New Guinea and Tahiti.
(Morton, J. 1987. Fruits of warm climates.)

Though there is some labor involved, it is worth the effort to peel good pomelos, skin the segments, and eat the juicy pulp. The skinned segments can be broken apart and used in salads and desserts or made into preserves. The extracted juice is an excellent beverage. The peel can be candied.
(Morton, J. 1987. Fruits of warm climates.)


The first seeds of Pomelo are believed to have been brought to the New World late in the 17th Century by a Captain Shaddock who stopped at Barbados on his way to England. By 1696, the fruit was being cultivated in Barbados and Jamaica. Dr. David Fairchild was enthusiastic about the first pummelo he tasted, aboard ship between Batavia and Singapore in 1899. In 1902, the United States Department of Agriculture obtained several plants from Thailand. Only one survived and was planted in the agricultural greenhouse in Washington, and budwood from it was sent to Florida, California, Puerto Rico, Cuba (the Isle of Pines), and Trinidad. When the trees fruited, the flavor and general quality were inferior and aroused no enthusiasm. Other introductions were attempted in 1911 but all the plants died in transit. In 1913, a horticulturist of the Philippine Bureau of Agriculture was given the assignment of collecting the best types of pummelos in Thailand. He shipped to San Francisco one tree of a "Bangkok" type that had been introduced into the Philippines in 1912. It was planted in the greenhouse of the Plant Introduction Garden at Chico. When it fruited several years later, the fruit was of such poor quality that it was considered useless. However, budwood was sent to Riverside and grafted onto two grapefruit trees growing on sour orange rootstock. One of the trees died but the other bore high-quality fruits which were much admired. Budwood was sent to different locations in Florida. In 1919, two trees of a superior pummelo from Thailand, which had been doing well in the Philippines, were shipped to the United States Quarantine Station in Bethesda, Maryland, and one of these survived. In addition, seeds from Thailand and from fruits in Chinese markets had been sent to Washington and seedlings were growing in greenhouses. Dr. Fairchild was eager to introduce the red-fleshed type he had enjoyed in 1899. In 1926, he collected budwood at a hotel in Bandoeng and sent it, together with seeds, to the United States Department of Agriculture but they did not survive the trip. However, seeds of a cultivar in Kediri with flesh nearly as red as his ideal pummelo did reach the Citrus Quarantine Station in Bethesda, Maryland and the seedlings were grown there successfully.
(Morton, J. 1987. Fruits of warm climates.)

In all the succeeding years, the Pomelo has never attained significant status in this hemisphere. Generally, it is casually grown as a curiosity in private gardens in Florida and the Caribbean area, and mainly for experimental and breeding purposes at the United States Department of Agriculture's research stations in Orlando and Leesburg, Florida, and at Indio, California, and Mayaguez, Puerto Rico, and at the University of California's Citrus Experiment Station, Riverside. There are small commercial plantings in southern Mexico furnishing fruits for local markets.
(Morton, J. 1987. Fruits of warm climates.)

We currently have 6 herbarium specimens for Citrus maxima in our collection. Click on any specimen below to view the herbarium sheet data.