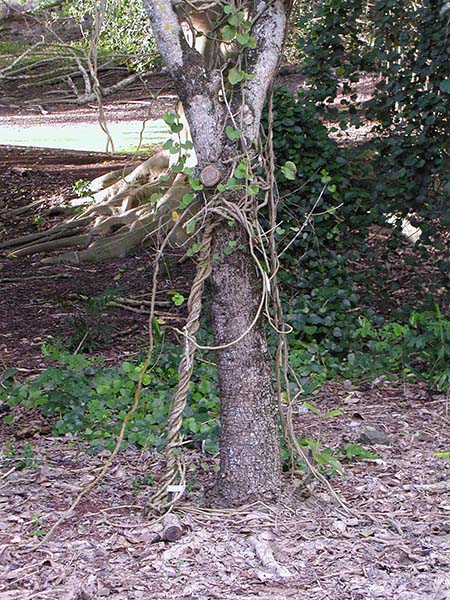 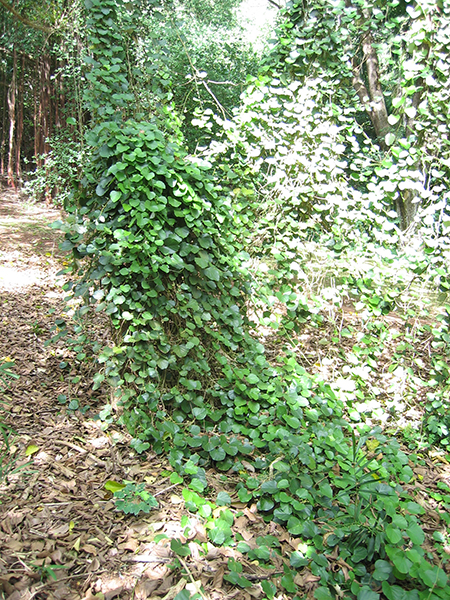 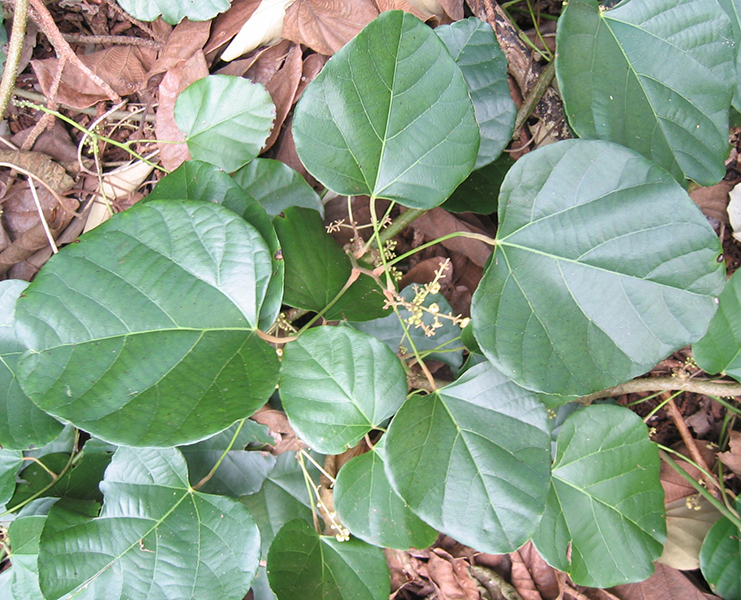 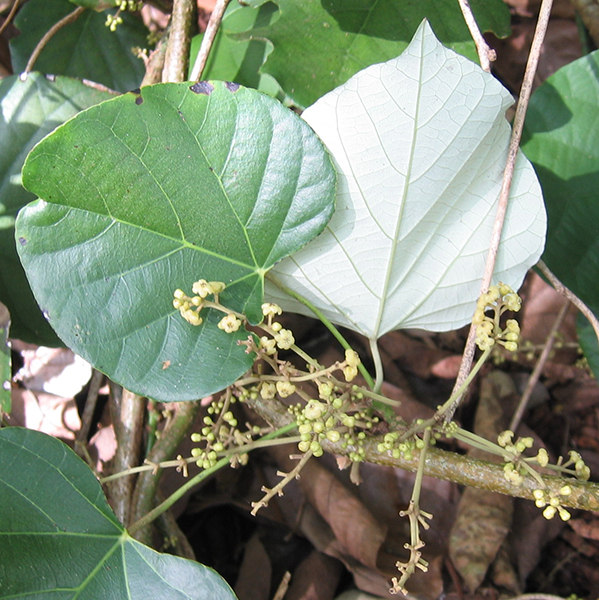 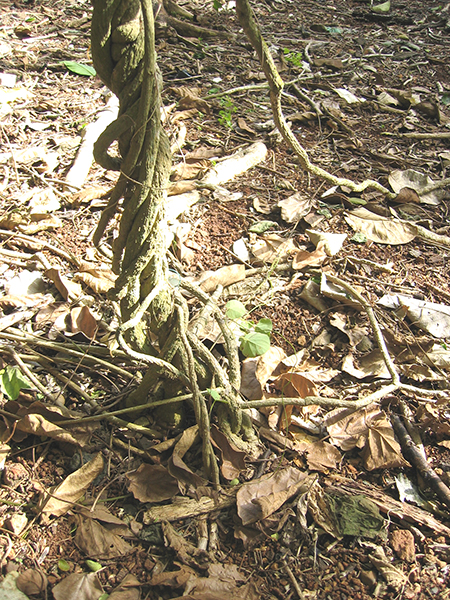 Curare grows as a large liana, or vine, found in the canopy of the South American rainforest. This woody vine, sometimes 4 inches thick at its base, climbs a considerable height up into the canopy (up to 30 meters high). It has large alternate, heart-shaped leaves, which may be 4-8 inches long and almost as wide, with a 2-6 inches long petiole. The leaves are smooth on top with a hairy white bottom, and deeply indented veins radiating from the leaf base.
Clusters of small (1/16-1/8 inches), greenish-white flowers are made up of separate male and female flowers.
The fleshy fruits are oval, narrow at the base, and approximately 1-2 mm long.
(Taylor, L. 1998. Herbal Secrets of the Rainforest.)

Curare vine also holds a place in herbal medicine systems. In Brazil and Peru the root of the vine is considered a diuretic, emmenagogue and fever reducer and is taken internally for edema, fever, kidney stones and testicular inflammation. Externally it is used for bruises and contusions. In Brazil the leaves are also crushed and applied externally for the treatment of poisonous snake bites.
In homeopathy the plant is used for inflammation of the urinary tract and enlarged prostate.
Sir Walter Raleigh and several other early explorers reported on the Indian's use of curare vine and curare poisons in the 1500's and the plant became known in European herbal medicine systems.
Maude Grieve, British author of the book "A Modern Herbal" (1931), reported that the plant acts as an antiseptic to the bladder for chronic inflammation of the urinary passages and recommended it for stones, leucorrhea, rheumatism, jaundice, dropsy and gonorrhea.
Because the strong muscle-relaxant chemicals in the plant are not absorbed in the stomach, oral extracts of the vine and root are considered "safe" in modern herbal medicine systems. Its uses today, however are mainly limited to South America. A root decoction is generally prepared for persistent urinary tract infections, prostatitis, and testicular inflammation.
(Felter, W.H. and Lloyd, J.U. 1898. King's American Dispensatory.)
(Taylor, L. 1998. Herbal Secrets of the Rainforest.)

Curare poisons is prepared by Indians of South America . They crush and cook the roots and stems, and add other plants and venomous animals, mixing it until it becomes a light syrup. They call this mixture "ampi", or "curare", which they use on the tip of their arrows and darts to hunt wild game.
Crude curare is a dark brown or black mass with a sticky to hard consistency and an aromatic, tarry odor. The name comes from Indian word meaning "poison". These poisons are not actually true toxins, rather they are potent muscle relaxers.
Curare is an alkaloid, and acts as a neuromuscular blocking agent to produce paralysis in muscles. It first affects the muscles of the toes, ears, and eyes, then those of the neck, arms and legs, and finally, those involved in breathing. Death from curare poison is caused by asphyxia (respiratory arrest) because the muscles become so relaxed that the muscles operating the diaphragm and lungs stop functioning.
Curare must get into the blood system for it to work. It does not hurt to eat something killed by a poisoned curare arrow because the poison is not absorbed in the stomach.
(Felter, W.H. and Lloyd, J.U. 1898. King's American Dispensatory.)
(Taylor, L. 1998. Herbal Secrets of the Rainforest.)

Many different plants are used to prepare curare arrow poisons and many different recipes are used by different Indian tribes in the Amazon. Generally the Indians in Venezuela and the Guianas use Strychnos guianensis plants as the main ingredient in their arrow poisons. Tribes in Peru, Ecuador and Brazil use curare vine (Chondrodendron tomentosum). In both cases, it usually is a combination of several different plants and sometimes, even snake and frog venom is added. The Sionas of Colombia, the Lamistas of Peru, and the Ketchwas of Ecuador use curare vine in the preparation of their poisons: they crush and cook the stems and roots of the vine, adding other plants and venomous animals. It is boiled down (sometimes for as long as 2 days) until it becomes a syrup or paste. The resulting substance is then used to coat the darts of their blowguns and hunting arrows. These poisons are not actually true toxins, rather they are potent muscle relaxers.
It works well for the Indians because oftentimes their prey is high up in the canopy. The muscle-relaxant effect of the poison prevents the animal from fleeing and by releasing their grip on branches in the trees, they fall to the ground. The muscle-relaxing effect begins almost immediately upon hitting the bloodstream, but death from respiratory arrest can take a few minutes for birds and small prey and up to 20 minutes for larger mammals.
(Taylor, L. 1998. Herbal Secrets of the Rainforest.)

Curare is a South American vine native to the Amazon Basin. It is found growing in Brazil, Bolivia, Peru, Guyana, Ecuador, Panama and Colombia.
(Taylor, L. 1998. Herbal Secrets of the Rainforest.)
The fruit of this vine is edible with a bitter-sweet taste.

Amazonian curare have traditionally been divided into two major types, based (oddly enough) on the types of containers the Indians stored them in: pots and tubes.
Pot curare predominates in the eastern Amazon and usually features Strychnos guianensis of the Loganiaceae and Strychnos family as the toxic component.
Tube curare is mostly is mostly made from Chondrodendron tomentosum of the Menispermaceae family or Moonseed family and is the curare of choice in western Amazonia.
(Plotkin, M.J. 1993. Tales of a Shaman Apprentice.)

Curare is yet another example of how the empirical knowledge of rainforest Indian tribes have been utilized by western science and the pharmaceutical industry.
However, as is often the case in plant research, after scientists rediscovered the "main active chemical" in the plant many years ago and turned it into a drug, further research on the natural plant was not forthcoming.
Literally no clinical research has been conducted on the use of extracts of natural vine and its root as it is used in herbal medicine systems today.

Curare vine is a rich source of alkaloids. The main alkaloid responsible for the muscle-relaxant actions is called d-tubocurarine. In 1844, the French physiologist Claude Bernard found in experimenting with frogs that curare blocks the transmission of nerve impulses from the brain to the muscles. D-tubocurarine was first isolated in 1897 and obtained in crystalline form in 1935. The alkaloid works by blocking motor nerve transmission, causing relaxation and flaccid paralysis of skeletal muscles in the body. It is not a toxin and the effects generally wear off in about 90 minutes. In 1942 curare and d-tubocurarine were introduced in clinical anesthesia, starting the modern era of surgery. Today it sold as a prescription drug used as a general anesthetic and muscle relaxant in various types of surgeries (during which respiration can be controlled with machines). It is also used to treat paralysis caused by tetanus (which causes uncontrollable muscle contraction throughout the body). D-tubocurarine's chemical pathways and actions are also being evaluated for their role blocking serotonin, reducing vomiting, alleviating drug withdrawal symptoms, and for their anti-anxiety effects. Intravenous administration of d-tubocurarine causes rapid muscle relaxation, first affecting the toes, ears and eyes, then the neck and limbs and finally respiration. D-tubocurarine also stimulates the release of histamine. This release of histamine may cause hypotension due to vasodilatation.
(Taylor, L. 1998. Herbal Secrets of the Rainforest.)
(Magic and Medicine of Plants.1993.)

We currently have 2 herbarium specimens for Chondrodendron tomentosum in our collection. Click on any specimen below to view the herbarium sheet data.