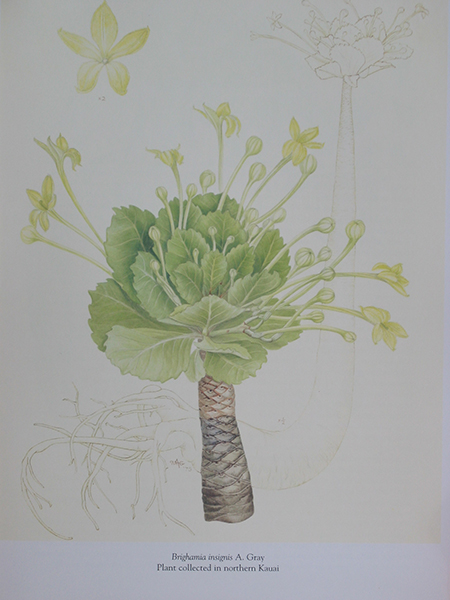 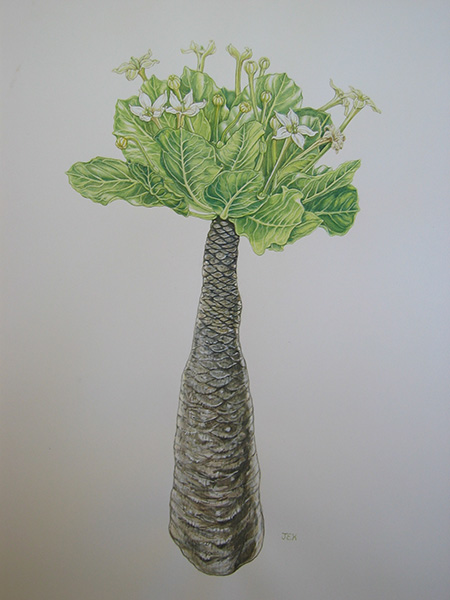 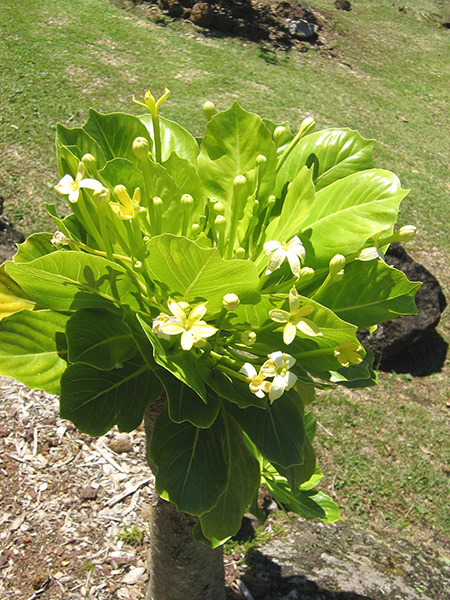 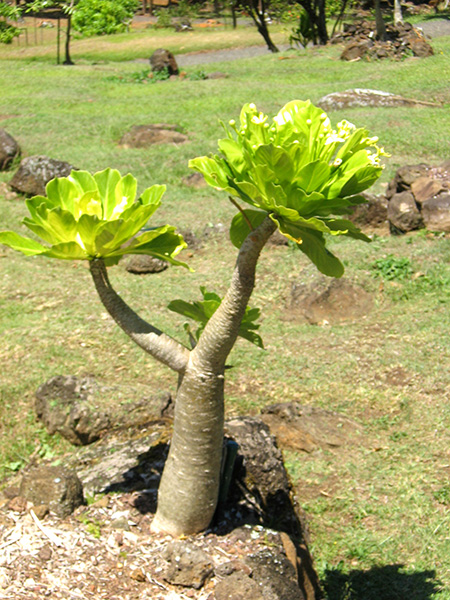 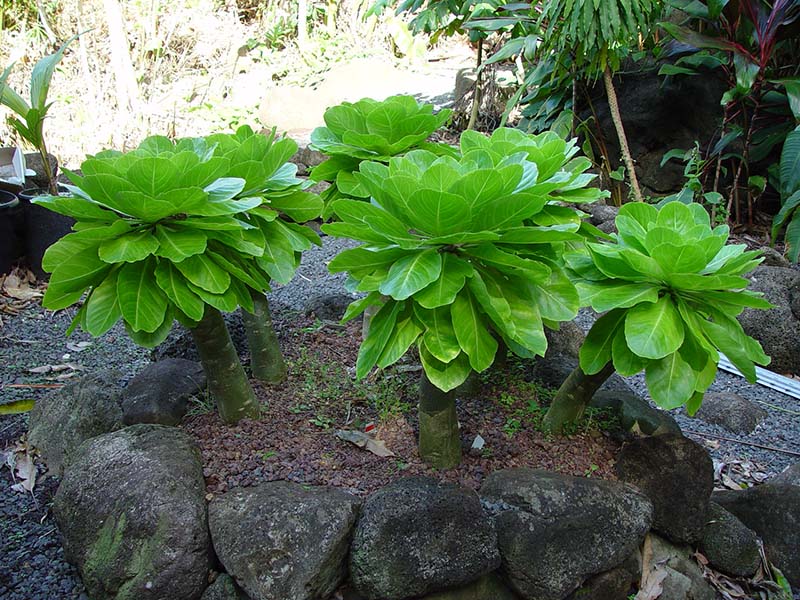 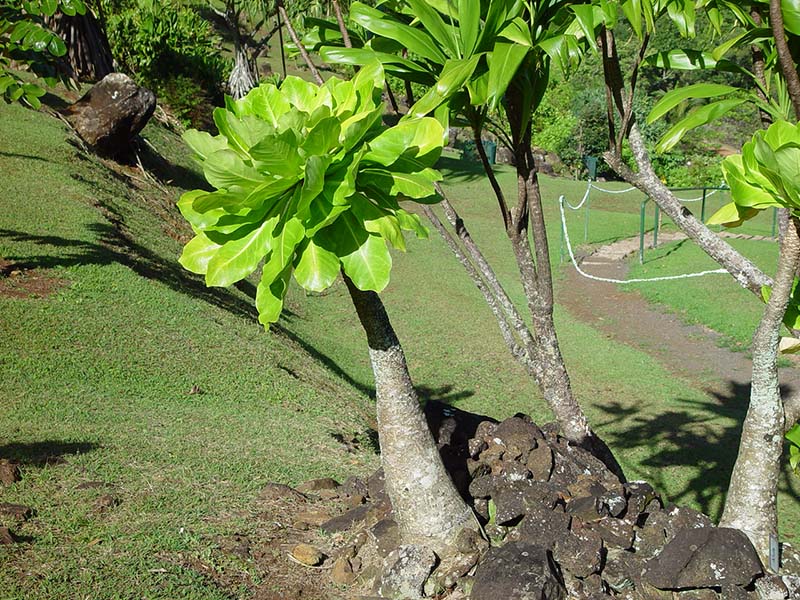 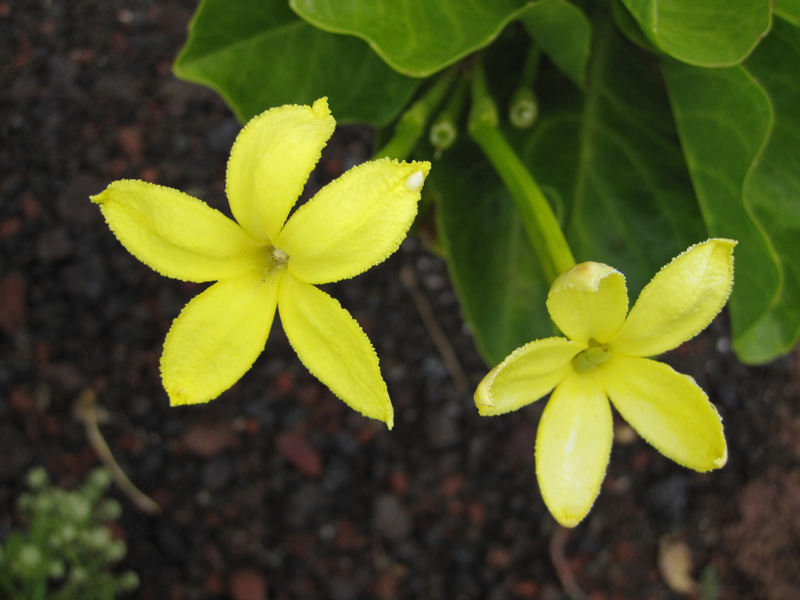 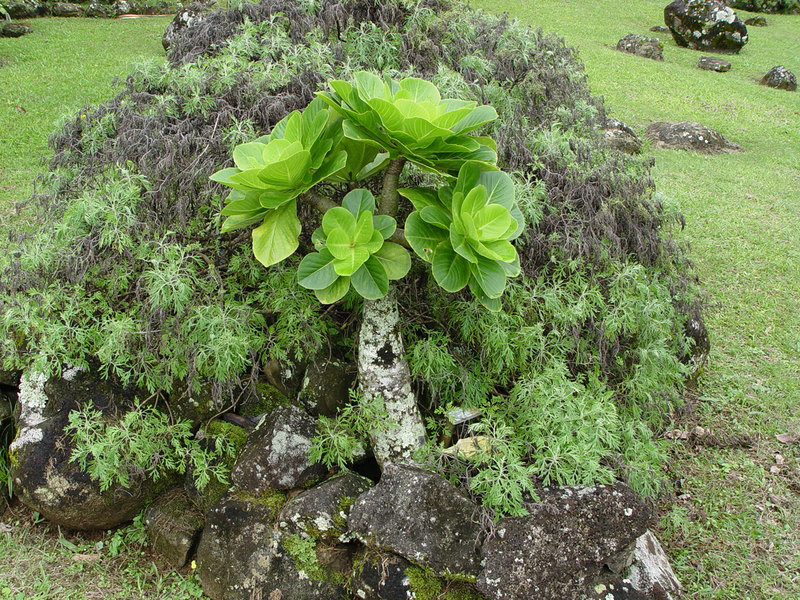 Brighamia insignis is one of the most unusual plants in the Hawaiian flora. It has succulent stems that are generally stout and unbranched that are usually 1-2 m tall but rarely can grow up to 5 m tall. The leaves form a dense rosette at the top of the stem and are shiny, somewhat fleshy and vary in color from bright to dark green shiny. The leaves are wider at the apex (tip) than at the base therefore they appear spoon-shaped. They are large; 12-20 cm long and 6.5-11 cm wide. The margins of the leaves are usually entire but small teeth may be present at the tip of the leaves.
Brighamia insignis blooms in September and October. Each flower cluster contains 3 to 8 fragrant, cream to yellow, trumpet-shaped flowers. Each flower is borne on a stalk that is 1-3 cm. The tube of these flowers is formed from five petals that are fused along their length creating a gradually widening tube that is 7-14 cm long. The floral tube remains fused along its length until after the pollen is released then a split develops along the upper surface of the flower that reaches down 1/3 the length of the tube. The flowers are fragrant with a slightly sweet smell that is similar to mild honeysuckle. The fruit of Brighamia is a small (1.3-1.9 cm long and 0.9-1.3 cm wide) two celled capsule which is dry at maturity with each cell splitting along two lines to release the seeds. Many pale, ovoid (egg-shaped) seeds that are 0.8-1.2 mm long are produced within a single fruit. The seeds have tiny raised bumps over their entire surface, a feature that differentiates this species from the only other Brighamia species, Brighamia rockii, in which the seeds are completely smooth.

Raw parts of the plants were eaten by early Hawaiians to treat consumption and other disorders.(Degener, O.1930. Ferns and Flowering Plants of Hawaii National Park.)
Crushed leaves mixed with sea salt are used to treat cuts and infections. (Kanahele, R. 2003.Pers.comm.)

Seed-set in wild Brighamia plants is poor. When plants in the wild produce flowers unless pollination occurs fruit do not form and seeds are not produced. As the native pollinator of Brighamia remains unknown and may be gone, botanists and horticulturists have stepped in to manually transfer pollen between plants to facilitate fruit formation. Since Brighamia grows on steep cliffs this work has involved rappelling with ropes to access the plants when they are in flower. If fruit are produced the resulting seeds are collected and grown in greenhouses in specialized facilities to ensure survival of the new plants. Eventually these plants can be out-planted into suitable habitat to increase the number of plants in the wild. Currently there are many plants in cultivation at the Limahuli and McBryde Gardens, but only a single plant remains in the wild!

Brighamia insignis is an endemic Hawaiian species meaning this is the only place in the world where it is found. It grows on rocky ledges with little soil or steep sea cliffs from near sea level to about 748 m on the Napali Coast of Kaua`i. This species is found in dry coastal grasslands or shrublands with annual rainfall less than 170 cm.

Based on Brighamia flower morphology, it is assumed that a large, long-tongued moth pollinated this species. Typically white-yellow fragrant flowers that are tubular and contain nectar are often moth pollination. However, long-tongue moth species of this size are extremely rare or possibly extinct on Kaua`i. Competition from invasive and aggressive exotic vegetation, predation and disturbance by goats, landslides, destructive hurricanes, and occasional removal of plants by collectors also have contributed to the decline and disappearance Brighamia. All but one population, consisting of a single plant, is currently known in the wild on Kaua`i (Ken Wood, pers. comm. June 2007).

The Latin specific epithet "insignis" means "outstanding" or "remarkable" which is a particularly apt epithet for this plant. Its extraordinary rosette of broad leaves at the top of a strange, succulent steam marks Brighamia insignis as one of the most peculiar of all Hawaiian plants. This genus was named after William Tufts Brigham (1841-1926), the first director of the Bernice Pauahi Bishop Museum in Honolulu. Brigham was a dedicated researcher who made extensive collections of many Hawaiian native plants including the first scientific collections from which Brighamia was described.

(Grierson, M. & Green, P.S. 1996. A Hawaiian Florilegium.)
Brighamia insignis is listed as endangered and is therefore protected under the United States endangered species act. A population was formerly known from Ha'upu Ridge on Kaua`i; however, this population no longer exists. It also previously grew on the Ka'ali Cliff on Ni'ihau, but it hasn't been reported from that island since 1947. The loss of these populations makes the species more vulnerable to extinction due to feral animals, invasive weeds, and natural disturbance such as landslides. Additionally, distinct, isolated populations may be genetically different therefore contributing to the genetic diversity of the species as a whole. When individual populations are lost this genetic diversity may be reduced which may lower the reproductive vigor of the species and reduce the potential for adaptation to changing environmental conditions.
(USFWS.1995)

Botanists and horticulturists have helped to save the species from extinction by pollinating plants and collecting seeds for propagation in collections. Today there are many plants in cultivation at the Limahuli Garden and McBryde Garden

We currently have 8 herbarium specimens for Brighamia insignis in our collection. Click on any specimen below to view the herbarium sheet data.