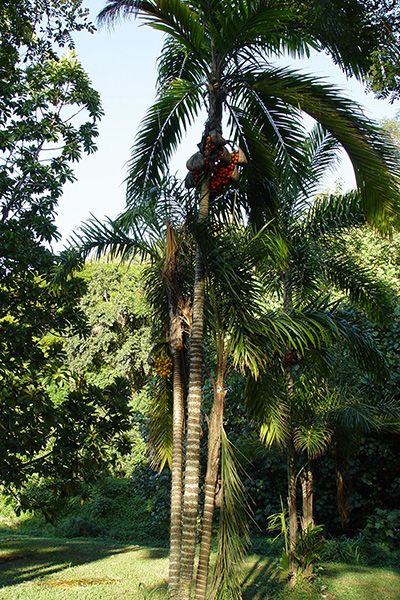 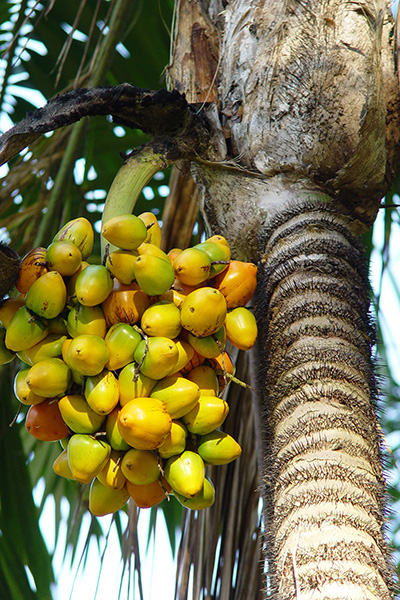 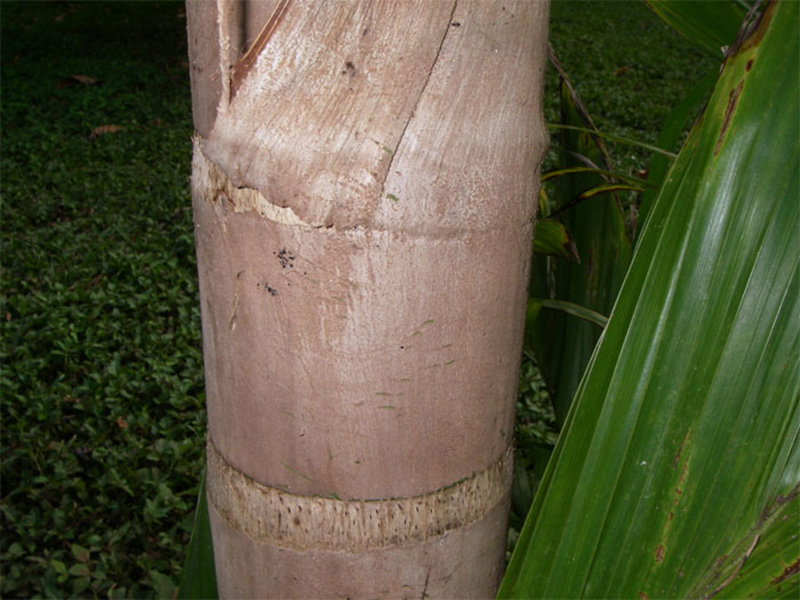 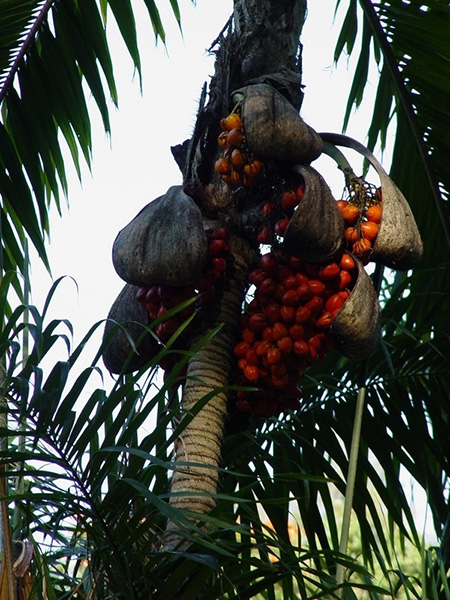 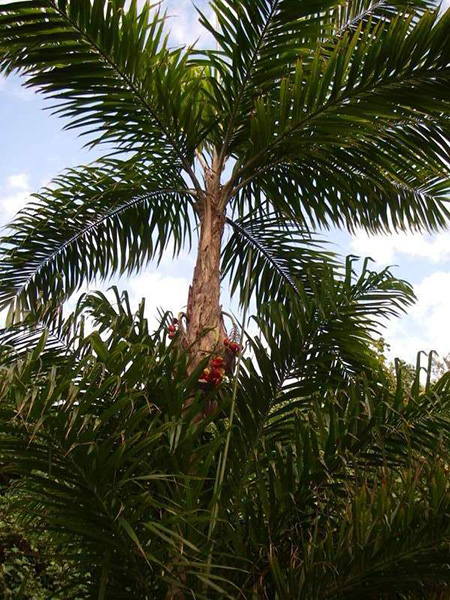 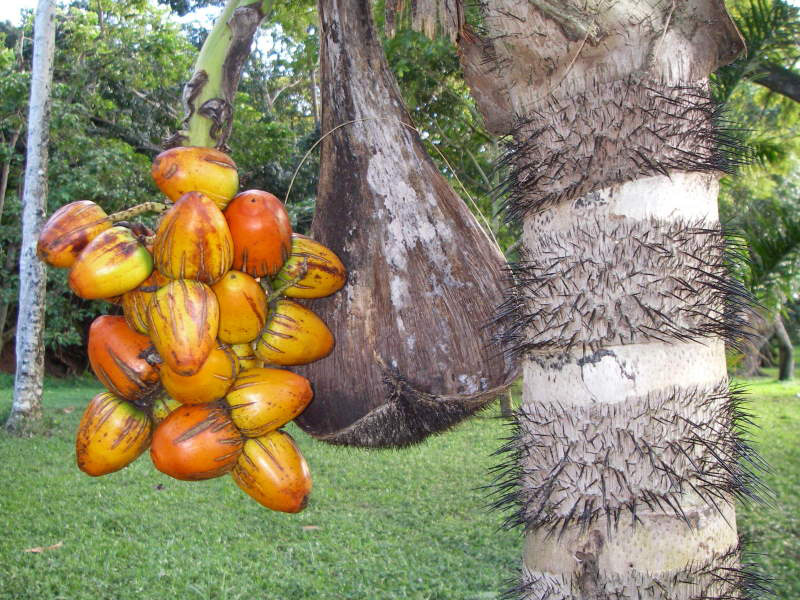 Bactris gasipaes, also known by the common English name Peach palm, is a multi-stemmed tree that grows up to 20 m tall. The internodes of the stems (stem regions between leaves) and the leaf sheaths are armed with spines that can be up to 5 cm long. The compound leaves are up to 2.5 m long and are divided into small leaflets that arise from the midvein and are 50 cm long. The development of the inflorescence bud in Bactris gasipaes triggers leaf abscission, therefore only the base of the leaf stalk remains on the stem by the time the inflorescence develops. Up to nine flower clusters are produced per stem. Each inflorescence is associated with a bract that is brown and spiny on the outside and white and without spines on the inside. Staminate (pollen producing) and pistillate (ovule producing) flowers are produced within the same flower cluster in this species and many more staminate flowers are produced than pistillate flowers. The fleshy fruits are dark red or yellow at maturity and are 5 cm in diameter with a single seed or sometimes are seedless.

Bactris gasipaes is cultivated as a perennial tree crop throughout tropical America for the production of heart of palm or Palmetto and the Chontaduro fruit. Cultivation for Palmetto generally relies on plants established from seed that are split into four or six plants following shoot development. The stems are harvested after 12 to 18 months when they are 9 cm in diameter. As the palm has multiple stems and regenerates through the development of root suckers the removal of stems in the harvesting of Palmetto does not kill the plant. An ongoing crop is maintained by removing the central growing tip to ensure the continual development of lateral shoots. Cultivars that are nearly spineless have been selected for heart of palm production. Cultivation for the harvesting of the fruit also uses plants that have been grown from seeds. Peach palms in cultivation bear fruit after 2-3 years. The parts of the plant that are not harvested are left in the fields to maintain organic cover or are used for animal feed.
In the Chirripo region of Costa Rica the spiny outer stem of Bactris gasipaes is wrapped around the support poles of chicken houses to prevent animals entering during the night. The trunk of Peach palm was used for the construction of bows, arrows, and spears as it is strong and flexible. The stems are also used in the construction of furniture, panels, and handicraft items. In southeast Equador Bactris gasipaes is the most frequently palm species cultivated by the indigenous Shuar and mestizo settlers with all parts of the plant used. The stems are used for the construction of weapons and tools, and for posts and or beams of houses. The leaves are used for thatch and woven into baskets. The palm heart is harvested and the fruit are eaten.

Bactris gasipaes is native to Central America, Amazonian Brazil, Bolivia, Colombia, and Peru. It is a sub-canopy species that grows on the edges of primary forest between sea level and 1200 m.

Historically, all parts of Peach palm were harvested and utilized for the resources they provide. The highly nutritious fruit is fibrous and has a high starch content with very little sweetness and contains vitamins, minerals, and protein. It is either boiled for consumption, pounded to produce a flour, made into compotes and jellies, dried by exposure to smoke, or fermented to produce a cool drink. The fruit harvest was stored through fermenting for consumption out of season. The flour produced from the fruit was used to make tortillas. The young inflorescences were roasted in the bracts that surround them. The part of the plant used for the heart of palm is the apical portion below the growing tip along with the base of the young fronds. The trunk of Peach palm was used for the construction of bows, arrows, and spears as it is strong and flexible. The stems are also used in the construction of furniture, panels, and handicraft items.

The flowers of Bactris gasipaes are beetle pollinated. The flowers produce a sweet fragrance and maintain high temperatures within the flowers to attract the beetles that serve as insect pollinators. The large number of flowers on each Bactris gasipaes tree means that upwards of several thousand beetles can be present on the tree at any one time. The beetles breed inside the flowers and the females deposit eggs in the mature flowers. The resulting larvae hatch and remain in the flowers for 2 to 4 days feeding on the tissue of the old staminate flowers (that produce the pollen). The pollen and ovules in the flowers are not generally eaten by the larvae as they are protected by the presence of tannins and raphide crystals. The larvae drop to the ground, pupate, and complete metamorphosis after about 14 days.

(Listabarth, C. 1996. Pollination of Bactris by Phyllotrox and Epurea. Implications of the palm breeding beetles on pollination at the community level. Biotropica 28(1): 69-81.)

Bactris gasipaes was domesticated by the Amerindians and is thought to have been one of the most important palm species in pre-Columbian history. The oldest archaeological evidence of Peach palm cultivation is from Costa Rica and dates from 2300 to 1700 BC. Historical records during European contact indicate that this species was the main crop species in Costa Rica at this time. The exact origin of domestication is not known and it is possible that the current domesticated species is derived from the independent domestication of several wild populations. During this long history of cultivation extensive selection was carried out and different cultivars were produced. Cultivars vary extensively particularly in the fruit size, which range from 20 to 70 grams in weight in different cultivars.