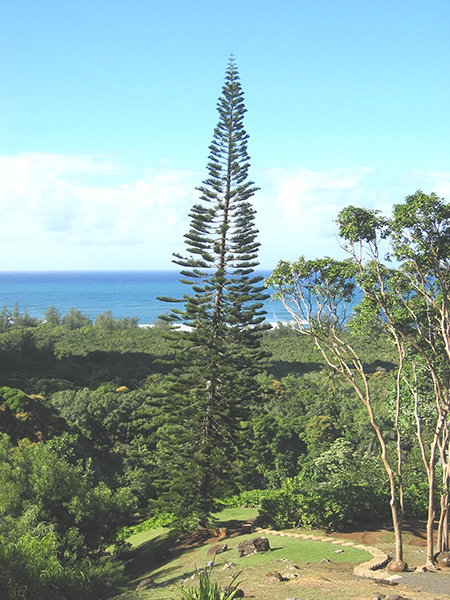 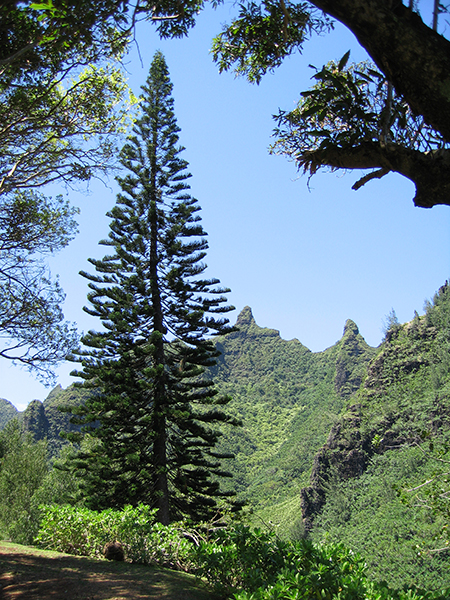 Araucaria columnaris is an evergreen tree that reaches up to 50 m of height with numerous horizontal lateral branches, producing the effect of a very dense and characteristic column. The trunk has dark, rough and scaly brown bark that is peels off in thin horizontal strips. The leaves juvenile plants are narrowly triangular, to 12 mm long, and needle-like. Adult leaves are widely ovate, about 6 mm long, rigid, usually broadly scale-like, spirally arranged or nearly 2-ranked, usually closely overlapping, flattened, persistent for many years. The male cones hang at the tips of the lower branches and are cylindrical and 6-8 cm long. The female cones are erect, green, globose-ellipsoid and produced in the upper branches. These may be up to 12 cm of diameter, with sharp tips at the ends of the scales. When mature the cones shatter to release the reddish brown scales about 4-5 cm in length, which bear the seeds.

Araucaria columnaris is often confused with Araucaria heterophylla, but that species has leaves that are more than twice as long.
(Preda, Milea. 1989. Dendrofloricol Dictionary.)
New Caledonia Pines make spectacular specimen plants when situated on large expanses of lawn. A tough tree, it can be used in urban landscapes, adding height to designs, framing entries and accessorizing tall buildings. They make attractive groves and are happily at home in containers indoors and outdoors.
(Preda, Milea. 1989. Dendrofloricol Dictionary.)
(Kepler, Angela K. 1990. Trees of Hawai'i.)

Cook pine is native to New Caledonia and the Loyalty Islands.

New Caledonia Pine was discovered by Captain Cook during his second travels to the Pacific.
The genus is named after the Arauco Indians of central Chile whose territory incorporates natural stands of this species, where it is known as the Pehuén. These Native Americans, who name themselves the Pehuenche ('people of the Pehuén'), harvest the seeds extensively for food.
These magnificent columnar trees are living fossils, dating back to the dinosaur age. Fossil records show that the genus also formerly occurred in the northern hemisphere until the end of the Cretaceous period.
(Kepler, Angela K. 1990. Trees of Hawai'i.)

We currently have 11 herbarium specimens for Araucaria columnaris in our collection. Click on any specimen below to view the herbarium sheet data.