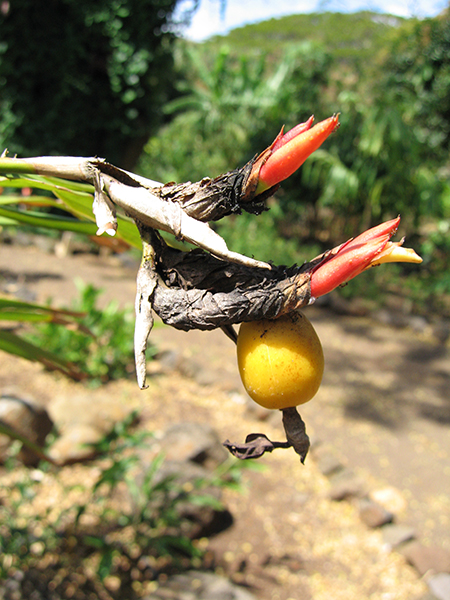 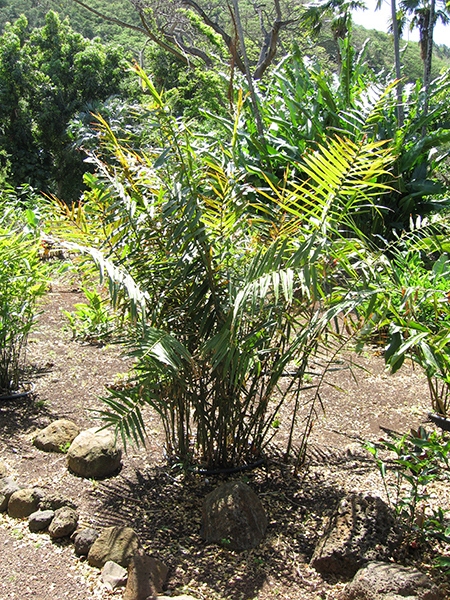 Alpinia luteocarpa is a low-growing herb that can grow up to 1.5 m tall with horizontal underground stems called rhizomes and erect stems on which the leaves are alternately arranged. The leaves are lanceolate (wide at the base and narrowing to the tip) and are arranged in a single plane along the stem. The underside of the leaves is dark reddish purple. The flowers are produced in clusters of three to five flowers at the ends of the branches. Each flower is associated with several dark brown to purple bracts that clasp the stalk of the flower. Each flower has a pink to red calyx that is fused along most of its length, and white petals that are fused along half their length. Each flower contain six stamens (pollen producing structures), but only one of these is fertile and the remaining five stamens do not produce pollen. The infertile stamens are fused together forming a lip, which is showy and may also serve to attract pollinators to the flowers. The round, three parted fruit is yellow and dry at maturity, and contains many small seeds. The fused floral tube remains attached at the tip of the ovary as the fruit develops.
A related species, Kha or Galangal (Alpinia galanga) has been known as a medicinal plant since 600 AD. The rhizome, or underground stem is considered aromatic and carminative and is taken for the treatment of digestive disorders such as indigestion. The fruit of Alpinia oxyphylla is used in traditional Chinese medicine for its warming properties.

Alpinia luteocarpa is native to the Philippines.

(Alpinia luteocarpa. August 14, 2005. Harold L. Lyon Arboretum Plant Profiles. Accessed on-line on September 14, 2007 at www.botany.hawaii.edu/herbarium/digitallib/
collections/hlaplants/pdfs/Zin_Alpinia_luteocarpa_w.pdf.)
(Newman, M., A. Lhuillier, A.D. Poulsen. 2004. Checklist of the Zingiberaceae of Malesia. Blumea Supplement 16, Leiden, The Netherlands.)
A related species Alpinia galanga, also known by the common name Kha or Galangal, is native to India, Indochina, and Malaysia and is cultivated particularly in Malaysia, Laos, and Thailand. The rhizome, or underground horizontal stem, has a sweet taste with a hint of black pepper and is used as a spice in Thai and Vietnamese curries and soups. The same species is used in Russia to flavor alcoholic beverages.
Scientific knowledge regarding the reproductive biology of perennial ginger species is limited. The breeding syndrome of a Chinese species, Alpinia kwangsiensis, has recently been studied and provides some interesting information on the reproductive complexity of this species. Two floral forms are found in this species; one form has stigmas that are receptive in the morning, when the pollen is released by the flowers of the second form, and the stigma is bent over to ensure it comes into contact with visiting pollinators. The second form has styles that are receptive during the afternoon, when the pollen is released by the flowers of the first form, and the stigma is held erect to ensure it comes into contact with visiting pollinators. Fertilization of these flowers in only successful when the pollen of one floral form is transferred to the stigma of the other form. Alpinia kwangsiensis is pollinated by large solitary bees such as the Carpenter bee (Xylocopa magnifica). The presence of different floral forms therefore ensures that outcrossing occurs to maintain genetic diversity within these populations and species.
The specific epithet ‘luteocarpa’ means yellow fruit. The genus Alpinia is named after the Italian botanist and physician Prospero Alpino (1553-1616) who was a professor of botany at the university of Padua and extensively studied the Egyptian and Mediterranean flora. He is thought to be the first to identify that pollen and ovules were produced on separate trees in Date palms (Phoenix dactylifera), which enabled him to hand pollinate the flowers for the successful production of fruit. Note: Alpinia luteocarpa is an unplaced name lacking a Latin description according to the Kew World Checklist of Selected Plant Families (2010).