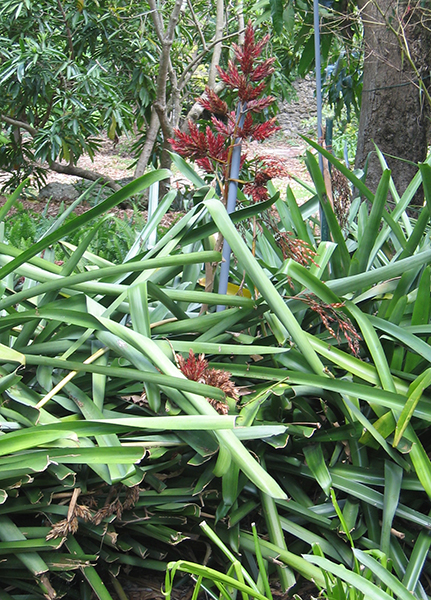 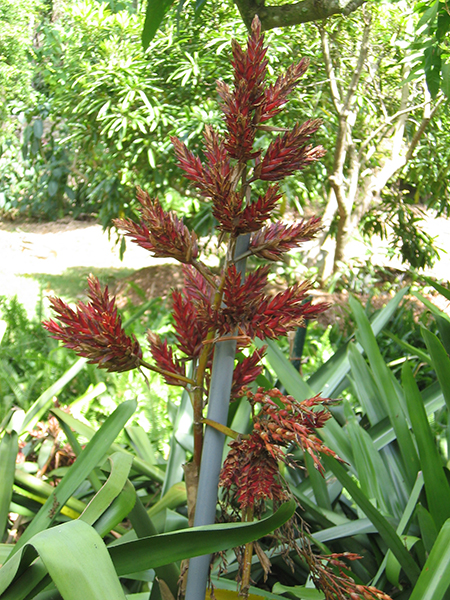 
The plants in this genus are mostly epiphytic, which means that they live up in the branches of the trees and exist mainly on the moisture and nutrients they obtain from the air.
However, Aechmea mulfordii is a large terrestrial plant, often growing near the sea level on sand dunes. Aechmea mulfordii has leathery green leaves ligulate or sword-shaped. The leaves may grow to 1 m (3ft) in length, at times much less, and form a central vase, which, in cultivation, should be kept filled with water. On this species, the primary bract greatly exceeds the lowermost branch. The flower-spikes sent up from the heart or crown of the plant are red panicle with the three outer sepaloid segments longer than the three inner or petaloid ones. Frequently confused with A. rubens and A. emmerichiae, A. mulfordii has less dense and elaborate inflorescence than A. rubens and the long, broad floral bracts conceal the ovary.
(Luther, Harry E. and Bert, Theresa M. 2005. Aechmea. Mulford B. Foster Bromeliad Identification Center.)

Aechmea mulfordii is native to Brazil.
The name of the genus “Aechmea” has been given by taxonomists because of the characteristically sharp points of the sepals and of the bracts covering the flower buds. The word “aechmea” comes from the Greek word “aichme " which means “spear tip".
(Newsletter of the Bromeliad Society of Central Florida. February, 2004. Vol. 30, Issue 02.)
Aechmea mulfordii was named in the honor of Mulford B. Foster, a self-trained naturalist who traveled throughout Mexico, discovering 200 new species of bromeliads in addition to species of amaryllis, cacti, palms and peperomia. His discoveries include Aechmea fosteriana (also, bearing his name) and Aechmea orlandiana, named after the city of Orlando in Florida, USA.
(Harry P. Leu Gardens. Art Exhibits Notes.)