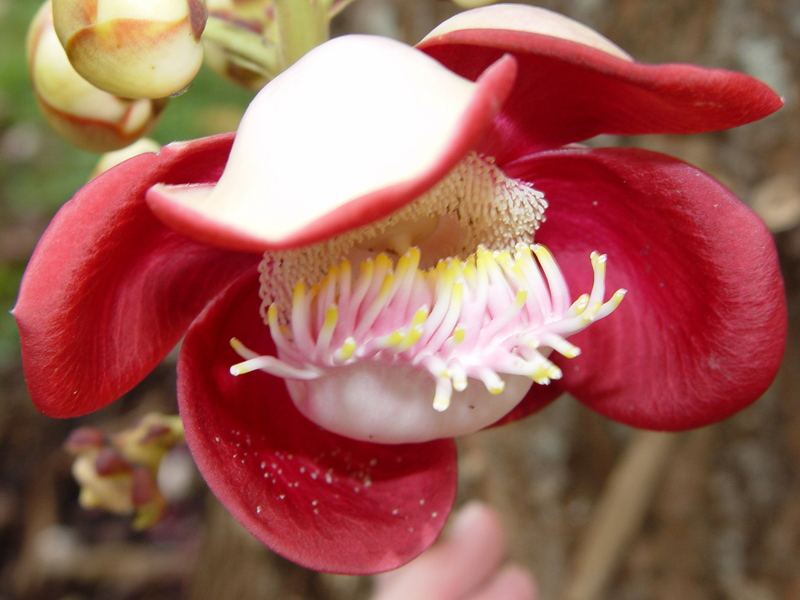 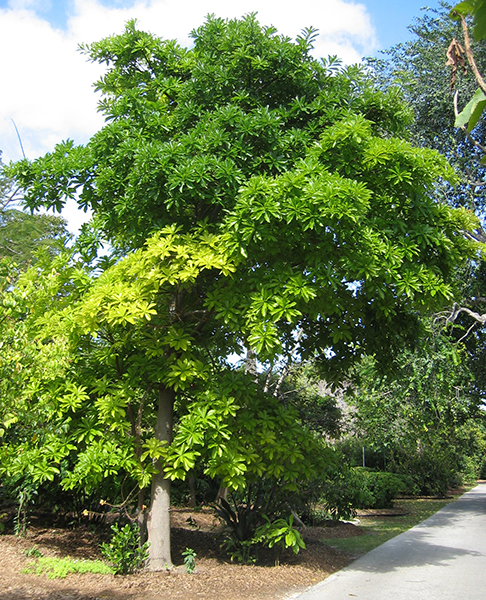 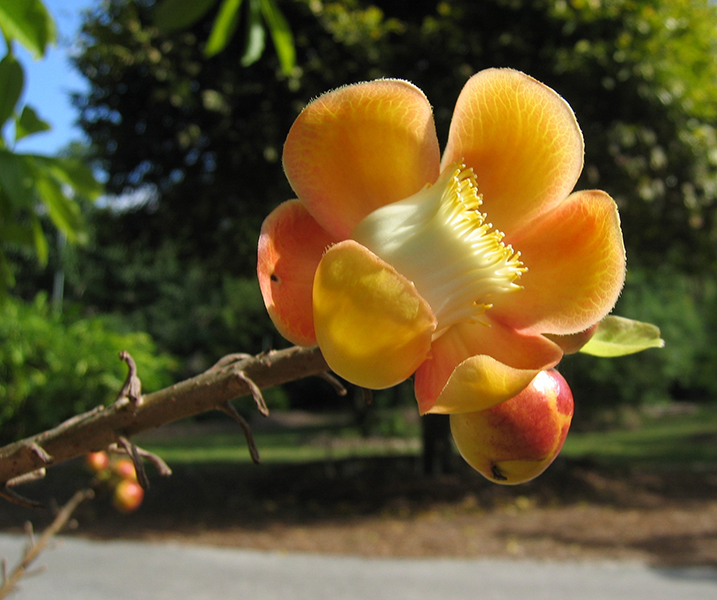 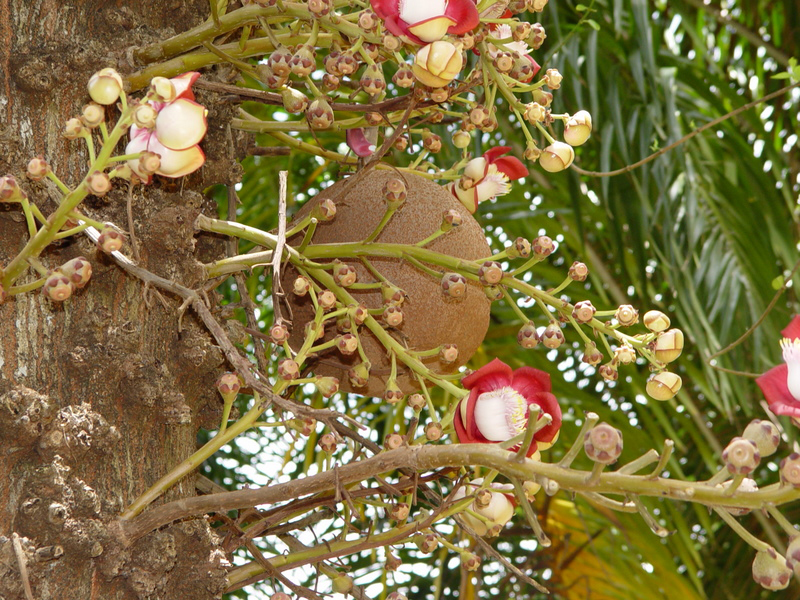 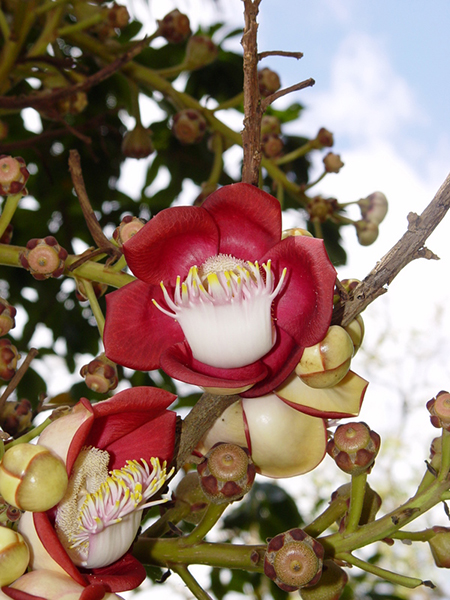 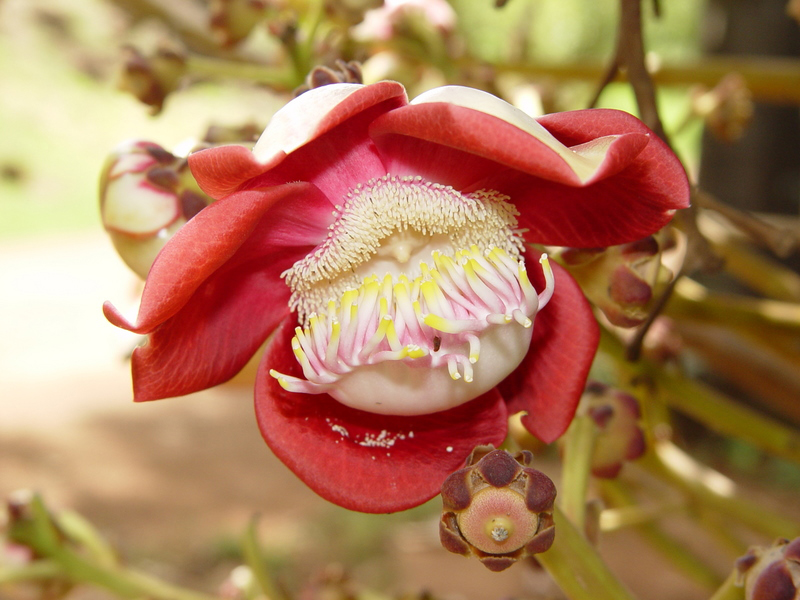 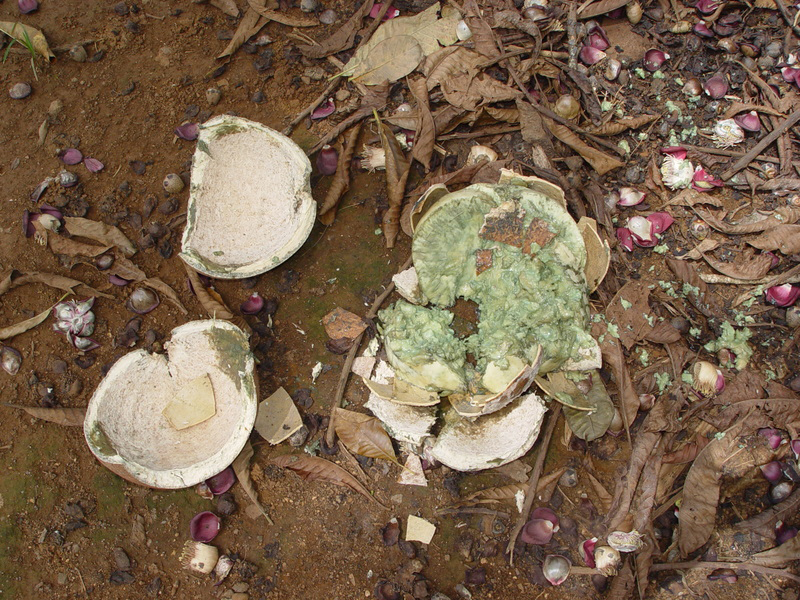 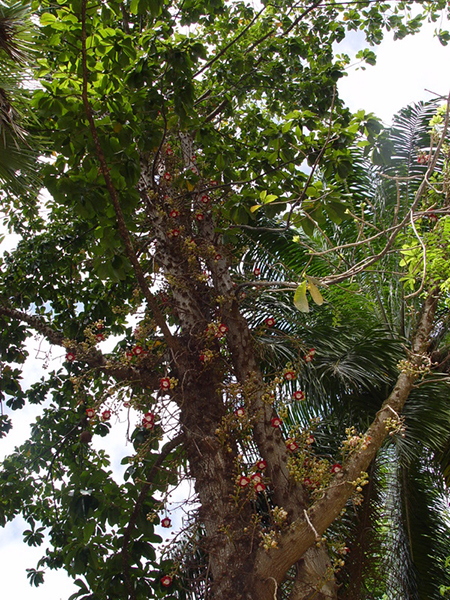 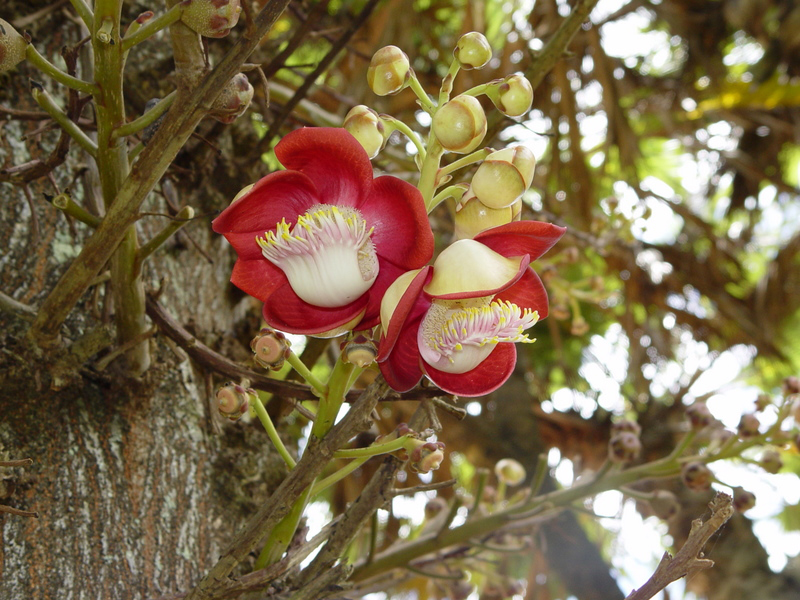 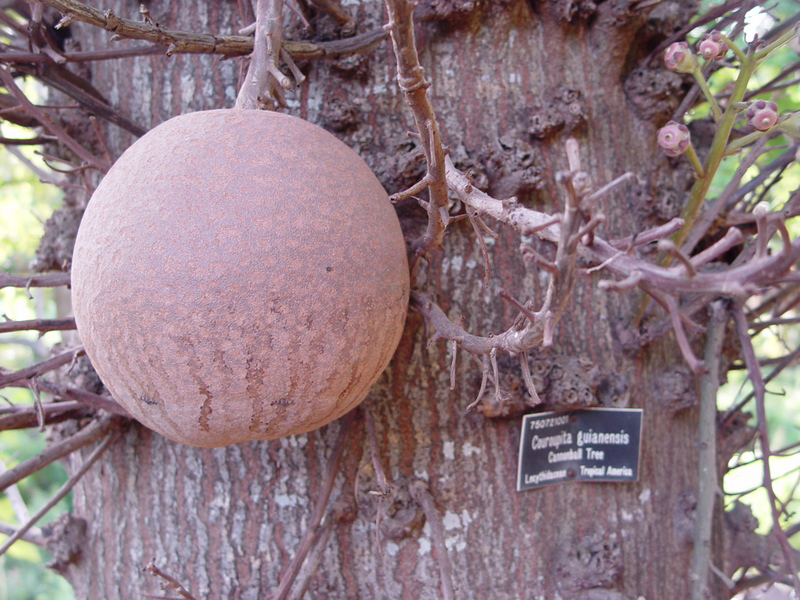 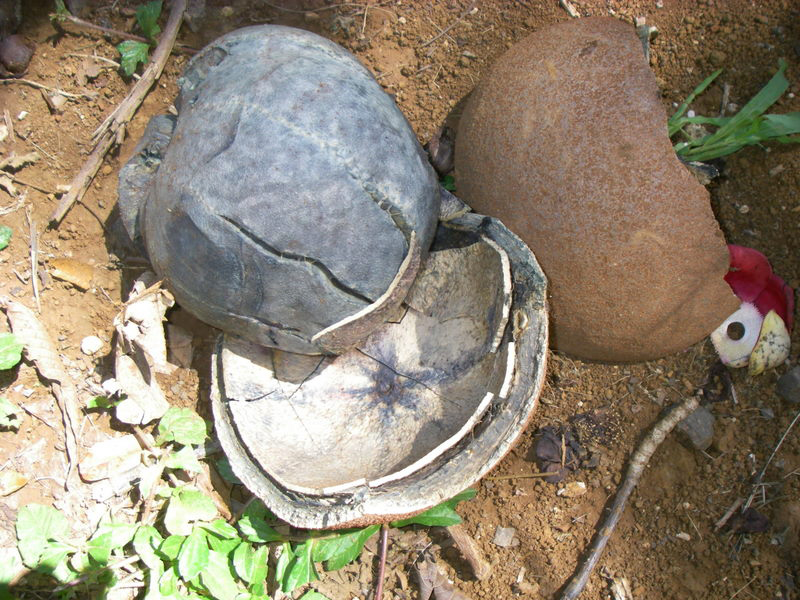 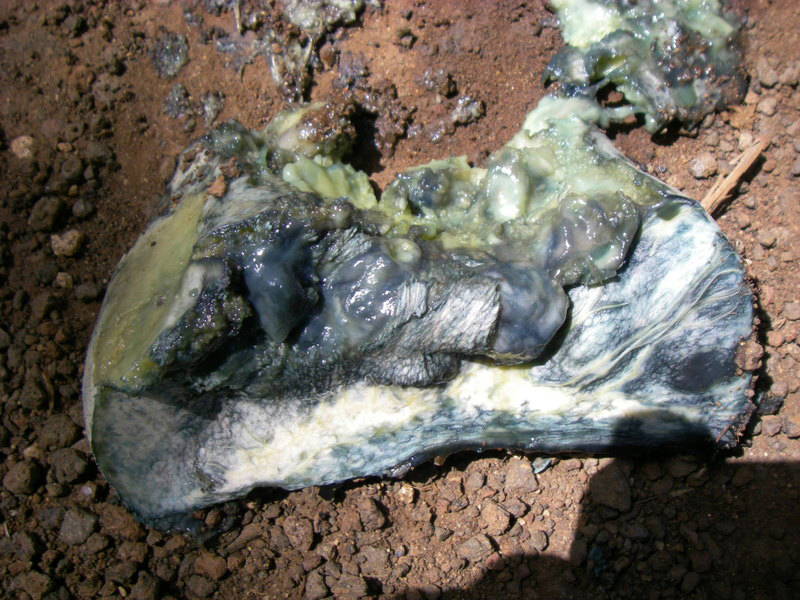 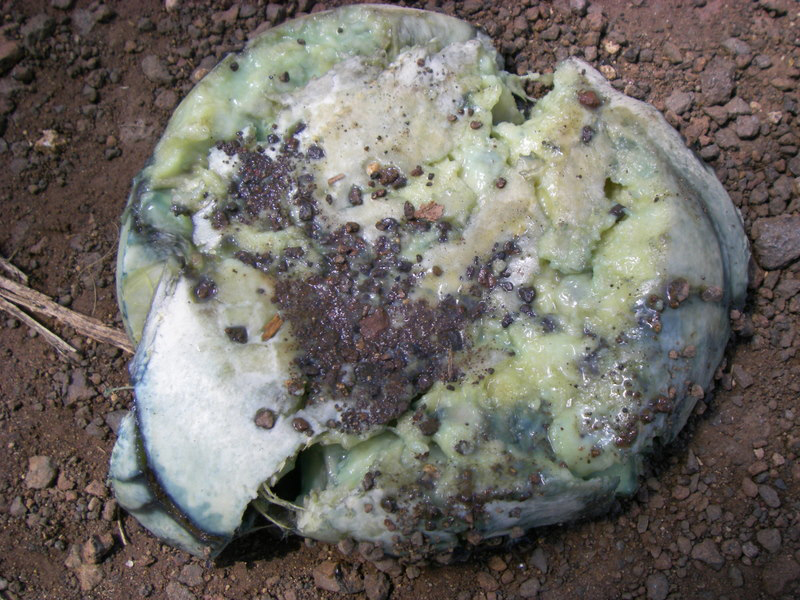 Cannonball Tree is a large deciduous tropical tree 75' tall and indigenous to the Amazon rainforest. The leaves, up to 6" long, are simple with serrate margin. It flowers in racemes which cauliflorus. The amazingly complex, yellow, reddish and pinks flower of the Cannonball Tree are heavenly scented - a cross between a fine expensive perfume and a wonderful flower scent. These are 3" to 5" waxy, pink and dark-red flowers growing directly on the bark of the trunk. The tree bears, directly on the trunk and main branches, large globose woody fruits. They look like big rusty cannonballs hanging in clusters, like balls on a string. The fruit contains small seeds in a white, unpleasant smelling white jelly, which are exposed when the upper half of the fruit goes off like a cover. The long dangling fruity branches give the tree an unkempt appearance.

The flowers of Cannonball Tree have a wonderful smell and can be used to scent perfumes and cosmetics. The hard shells of the fruit are sometimes used as containers.

(Information for this species compiled and recorded by Camelia Cirnaru, NTBG Consultant.)
Cannonball Tree is native to rainforest of the Guiana's in Northeastern South America.


Fruits are edible and are occasionally eaten, but the smell of the white flesh discourages most people from trying them.
Couroupita guianensis is pollinated by bats. Bats are very important for the survival of numerous species of plants. The bat may eat the pollen, anthers, and stamens of the flower, but it also can carry huge loads of pollen on its face and rough fur. So much pollen can attach to a bat during one visit that some of it is bound to be deposited on the next flower. Bats fly relatively long distances swiftly. Thus they can be effective transporters of pollen between widely spaced flowers and thereby perform effective cross pollination in the process. Although local visits are more frequent, bats may forage long distances from their daytime roosts. In some instances, bats travel long distances to a specific plant population; one fruit bat species in Africa flies two and a half hours nightly to visit a particular chiropterophilous plant species. More than 500 species of tropical plants are pollinated by nectar and pollen-eating bats, and they have evolved special features to make their nectar and pollen attractive to the nocturnal flyers. Such plants are called chiropterophilous, or "bat-loving" (bats being mammals of the order Chiroptera).
(Gibson, Arthur G. Bats and their flowers.)

From the flowers of Couroupita guianensis, an aliphatic hydrocarbon and stigmasterol have been isolated.
Abstract of new scientific research: The antimicrobial activity of extracts from Couroupita guianensis Aubl. tissues were measured against 12 gram positive, 12 gram negative, and one protozoan. Methanol extracts of leaves, flowers, fruit, stem and root barks, and stem and root heartwood of the plant inhibited growth of the microorganisms, a phenomena that was enhanced by further fractionation of the methanol extracts into petrol, dichloromethane, ethyl acetate and butanol soluble fractions. Most activity was in the petrol fractions of the flowers, fruit, and stem bark; the ethyl acetate fraction of the flowers, and stem and root bark; and the dichloromethane fractions of the stem and root barks. Some fractions of the stem bark and flowers exhibited antifungal activity.
(M. R. Khan, M. Kihara, A. D. Omoloso. 2003. Antibiotic Activity of Couroupita guianensis. Journal of Herbs, Spices and Medicinal Plants. Volume: 10 Issue: 3. p:95-108.)

We currently have 5 herbarium specimens for Couroupita guianensis in our collection. Click on any specimen below to view the herbarium sheet data.