Little known is the story of Polyscias bisattenuata (ohe ohe in Hawaiian), a critically endangered member of the Araliaceae (ivy family). Endemic to Kaua‘i and only infrequently found growing on slopes and ridges between 1,300 and 2,300 feet, in recent years ohe ohe was known from just two trees until 2005 when NTBG Research Biologist Ken Wood discovered some 30 individuals growing in a summit gulch and on the cliffs of Mt. Haupu.

Then, in the fall of 2016, working with the support of a grant from the Mohamed bin Zayed Species Conservation Fund, NTBG’s Living Collections Botanist/Field Collector Natalia Tangalin struck “botanical gold” when she discovered 34 new trees in five populations (four of them previously unknown) while botanizing on the steep slopes and ridges of the forests of Haupu and Mt. Kahili. To date, NTBG has documented a total of 52 ohe ohe in seven populations. 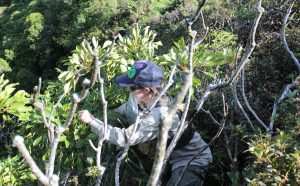 Like many native plants in Hawaii, ohe ohe fruits are subject to predation by rodents. Natalia knew that between her return visits to the trees, the olive-shaped, purplish fleshy fruits would likely fall victim to rats. This sprawling tree is also threatened by habitat loss and invasive plants like strawberry guava and Koster’s curse. Add to that no known pollinator and you have a recipe for extinction.

Meanwhile, NTBG’s Oshibana volunteer artisan group had heard about the need to protect the vulnerable fruit and offered to design and sew rodent deterrent bags. Two volunteers, Maryanne Nordwall and Joanne Watson, experimented with different material, finally settling on woven plastic mesh sandbags which were readily available, flexible, and most important — rodent resistant. Together they sewed more than a hundred bags of varying sizes.

With Velcro-lined openings, the bags stayed firmly attached to tree branches while keeping out predators out but letting in light and air. The bags protected the fruit until they reached maturity and until Natalia and other field collectors and KUPU interns were able to return to harvest the fruit. Over multiple visits, they were able to collect some 55,000 seeds, adding 50 accessions to the Garden’s living collections.

Back at NTBG’s Conservation and Horticulture Center, Nursery Manager Ashly Trask, working with staff, volunteers, and KUPU intern Randy Umetsu, began the monumental task of squeezing out seeds from thousands of fruits to be cleaned, sorted, counted, and potted within hand-built cages (to protect from rats). Before long the south shore nursery was filled with a bright green sea of seeds popping out of a perlite-vermiculite substrate. Ashly said that the survival rate of young sprouts was around 80 percent. Now, less than a year later, NTBG has grown more than 6,000 plants. 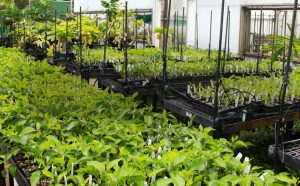 With so many seeds, the question arises: can these seeds be dried or frozen and stored for later planting? Currently, ohe ohe seed storage behavior remains unknown but NTBG’s Seed Bank and Laboratory Manager Dustin Wolkis continues to test the seeds’ ability to withstand cold and dry storage conditions.

Already around 200 plants have been planted in the Lower Limahuli Preserve and many more will be added to the native section of McBryde Garden. NTBG is also working to re-establish populations within its former range on private lands. Mike DeMotta, Curator of Living Collections, said the successful collection of ‘ohe‘ohe helps secure genetic representation of the species in NTBG’s ex-situ collection, adding: “Our goal has been to create additional collections so if the population collapses in the wild, we’ll still have a broad representation of the species.”