Aided by drones, NTBG discovers Hibiscadelphus woodii is perched on the edge

Flashback to 1991 as NTBG Research Biologist Ken Wood dangles from ropes, exploring uncharted territory in Kauaʻi’s Kalalau Valley. Botanists had theorized that a yet-to-be-found Hibiscadelphus species could exist in the mesic forests of northwest Kauaʻi, so when Ken saw it, he knew immediately what is was: a new-species of Hibiscadelphus!

In the 1990s, NTBG botanists had developed their own distinctive roping technique to survey vertical cliffs, contributing to astounding results: the discovery of 11 new plant species in the Kalalau area alone. The 1991 Hibiscadelphus discovery would go on to be scientifically described in 1995 by NTBG’s (now) Science and Conservation Director Dr. David Lorence and Research Associate Dr. Warren Wagner who named the new species Hibiscadelphus woodii, in honor of its discoverer. 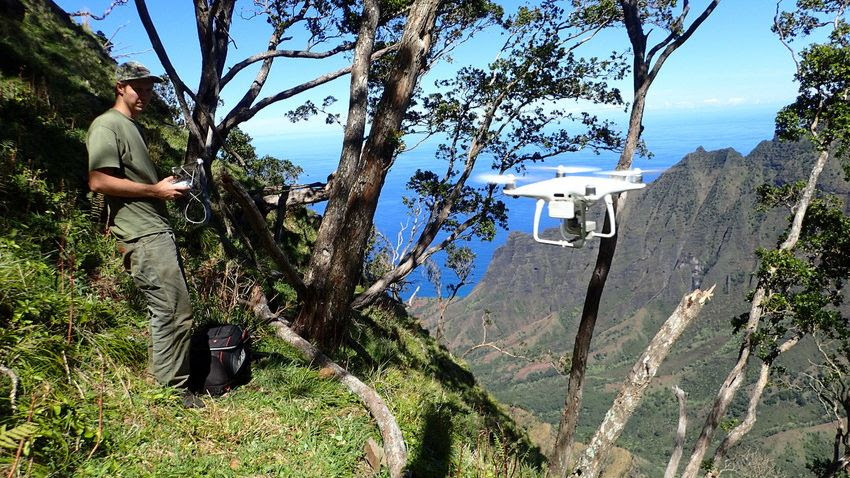 Over the next two decades, NTBG staff gave their all to protect H. woodii, but attempts at grafting, seed propagation, and cross-pollination all failed. After three of the four known individuals perished in a rock slide in the late 1990s, the lone individual remained until it was found dead in 2011. It appeared the species had gone extinct. This exceptionally rare genus had lost six of seven documented species.

Fast forward five years to 2016 when, in search of a tool that would enable the survey of extreme cliff habitats, I established a drone program at NTBG. Limahuli Garden and Preserve proved to be a great training ground for this new technology. Early results were positive as we found new populations of highly endangered plants such as Euphorbia eleanoriae and Plantago princeps var. anomala, both of which were known from less than 50 individuals left in the wild.

As discussions on how to expand NTBG’s nascent drone program ensued, Ken and I bounced lists of potential target plants off of each other in weekly lunch meetings. In 2018, we decided to apply for a grant to the Mohamed bin Zayed Species Conservation Fund submitting a proposal aimed specifically at re-finding the “thought to be extinct” Hibiscadelphus woodii.

We selected H. woodii because the steep habitat had been nearly impossible to survey and drones were proving they could potentially unlock these otherwise inaccessible cliffs. Fortunately our application was accepted and we were able to upgrade our equipment before starting field work in the summer of 2018.

Perched on the edge

A particularly rainy summer was the first of many challenges we faced. Beginning our search where H. woodii had been previously found, we embarked on long, steep, downhill hikes to the edge of the Kalalau cliffs. On our first day in the field, misty conditions cut short our survey and damaged the drone controller. Three subsequent attempts were rained out and before long winter was looming ahead.

In January, Ken and I, accompanied his long-time field partner botanist Steve Perlman, hiked down to the edge of the Kalalau Valley where we resumed our search for H. woodii. After two 25-minute flights over our area of interest, nearly 100 photos revealed we were no closer to finding the plant.

Binoculars aided in the selection of a secondary survey area in an adjacent valley, much further down the precipitous slope.

Indicator species, such as the silvery Nototrichium sandwicense, hinted at an intact native cliff system, but as our third flight commenced, the wind picked up and a fine mist started falling. The quadcopter descended 400 feet into position, but the elements made plant identification difficult. I snapped as many photos as possible hoping to catch a glimpse of the small, yellow flower.

With deteriorating weather conditions, we decided to attempt one last flight covering the remaining section of sheer cliff face, 1,000 feet below where we stood. While the drone had revealed plant communities comprised mostly of natives, none of us were confident we had seen the Hibiscadelphus. 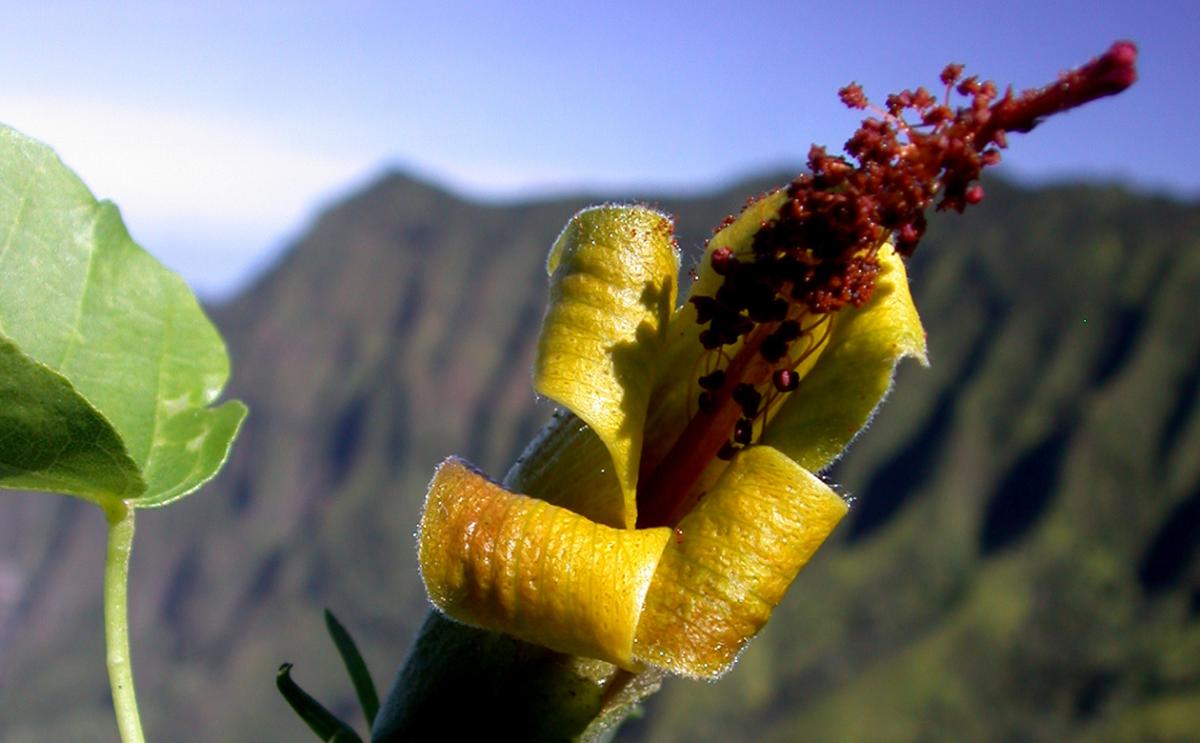 Back in the computer lab at NTBG’s Botanical Research Center, I started post-processing the drone’s images. I assumed the tree would be distinct and easily visible in a photograph, but as I meticulously reviewed each photo, my hopes faded.

Shot by shot, I studied the photos until in the right-hand corner of photo #228 I spotted something interesting.  Could it be?

I had never seen a live Hibiscadelphus but was eager to show Ken who is seasoned in identifying native plants. Together we examined herbarium specimens and historic photos from the original discovery. When we revisited the drone photo on my computer, a wave of joy washed over us — indeed, there it was! We had rediscovered Hibiscadelphus woodii!

Our exuberance quickly gave way to a determined focus on what we needed to do next. Additional surveys were necessary to confirm the identification, but we were rained out over three consecutive days. On the fourth day, the rain broke and we were able to fly again.

Returning to our launch point on the Kalalau rim, I used the drone to relocate the Hibiscadelphus and was thrilled when we located two additional individuals. We used high-resolution video to search for potential access routes, but the cliffs are simply too high and sheer to allow any avenue to the plants.

What’s next for drone-aided plant conservation?

That brings us to today. Now that we have proven the value of drones in finding rare plants, the question is: what’s next? Research is underway with collaborators at the University of Sherbrooke in Quebec, Canada to employ cutting mechanisms which may provide a platform for collecting plant material using a drone. In the near future, software development may open doors to smart surveys and AI post-processing.

For me, this interface between conservation and technology is truly exciting. Rediscovering a new population of H. woodii, a plant taxa known only from a very limited area of this single island, offers real hope in the face of daunting numbers. Since the year 2000, Hawai‘i may have lost some 27 plant species, a number poised to grow as habitat is lost, invasive species expand, and other climate and environmental factors advance. This new technology provides a promising avenue for finding, collecting, and saving plants that might otherwise be lost forever.