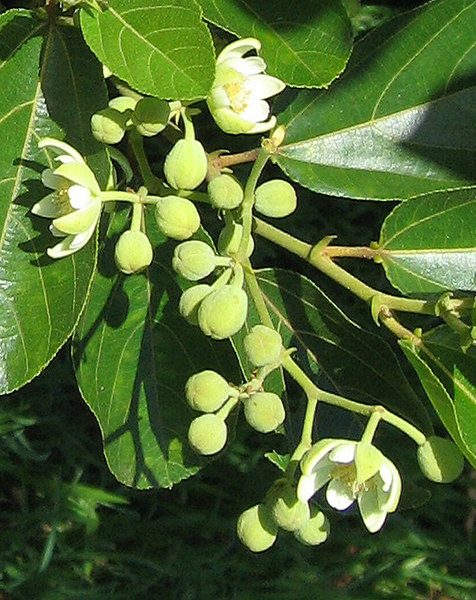 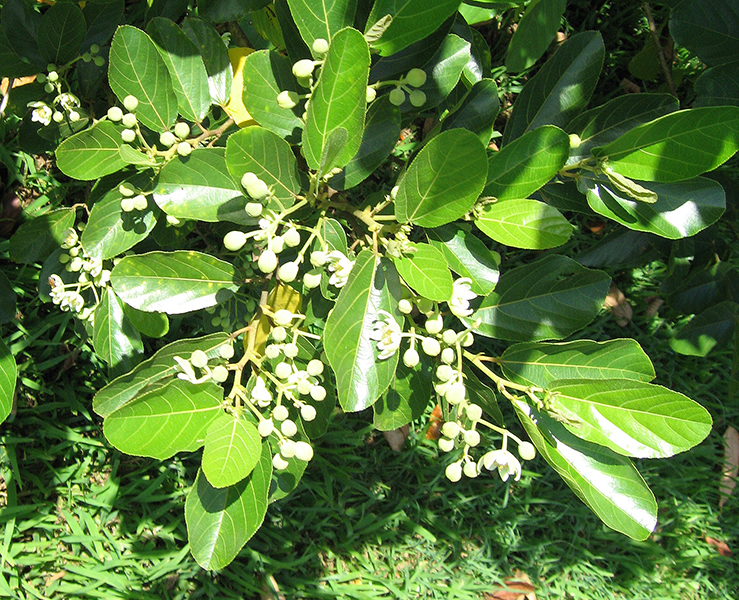 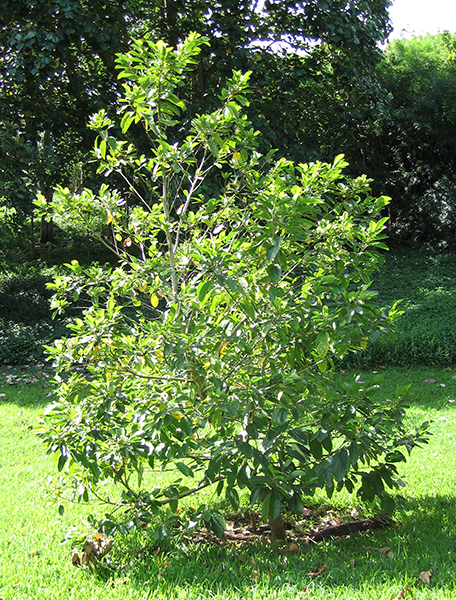 
Tricospermum richii is a tree species reaching up to 25 meters tall in Fiji. The species apparently obtains shorter heights of around 15m in Samoa. The stems are sparsely hairy. The leaves are not divided, held alternately, and are oval to elliptic in shape. They are 5-20cm long, heart shaped at the base and have a pointy tip. The leaf surface is covered in stellate (star shaped) hairs, particularly on the lower surface. The petiole is 7-45cm long, tomentose as for the leaves. The flowers are held either in the axils of the leaves or just below the stem apex. The flowers are held in cymes up to 12cm long when mature. The petals are white, with pubescent hair on the outer surface and a pale green tinge on the inner surface. There are 5 petals per flower, 8-12mm long. The calyx is also 5 parted with sepals 8-12mm long, pale green on inside and grey-green on the outside. The copious stamens are yellow in color. Flowers and fruits are produced throughout the year. The fruit is a papery, compressed ellipsoid capsule 2-3 cm across, covered in dense hairs. The plants flower during March to August in Samoa, however have been reported to flower and fruit at all times of the year in Fiji.

Whistler, A. W. (2004) Rainforest trees of Samoa: A guide to the common native and naturalized lowland and foothill forest trees of the Samoan Archipelago. Isla Botanica, Honolulu, Hawaii.

The species is mentioned in Whistler’s (2000) “Plants in Samoan Culture: the ethnobotany of Samoa”, however no particular uses or qualities are attributed to the species.

Fiji and Samoa. The species occurs in foothill and montane forest from sea level to 1120 meters elevation.

Whistler, A. W. (2004) Rainforest trees of Samoa: A guide to the common native and naturalized lowland and foothill forest trees of the Samoan Archipelago. Isla Botanica, Honolulu, Hawaii.

Under no conservation threat.

Tricospermum richii has been mentioned in a number of ecological works regarding the Samoan and Fijian Archipelagos respectively:

Kirkpatrick, J. B. and Hassall, D. C. (1985) The vegetation and flora along an altitudinal transect through tropical forest at Mount Korobaba, Fiji. New Zealand Journal of Botany, 23: 33-46.

We currently have 5 herbarium specimens for Trichospermum richii in our collection. Click on any specimen below to view the herbarium sheet data.