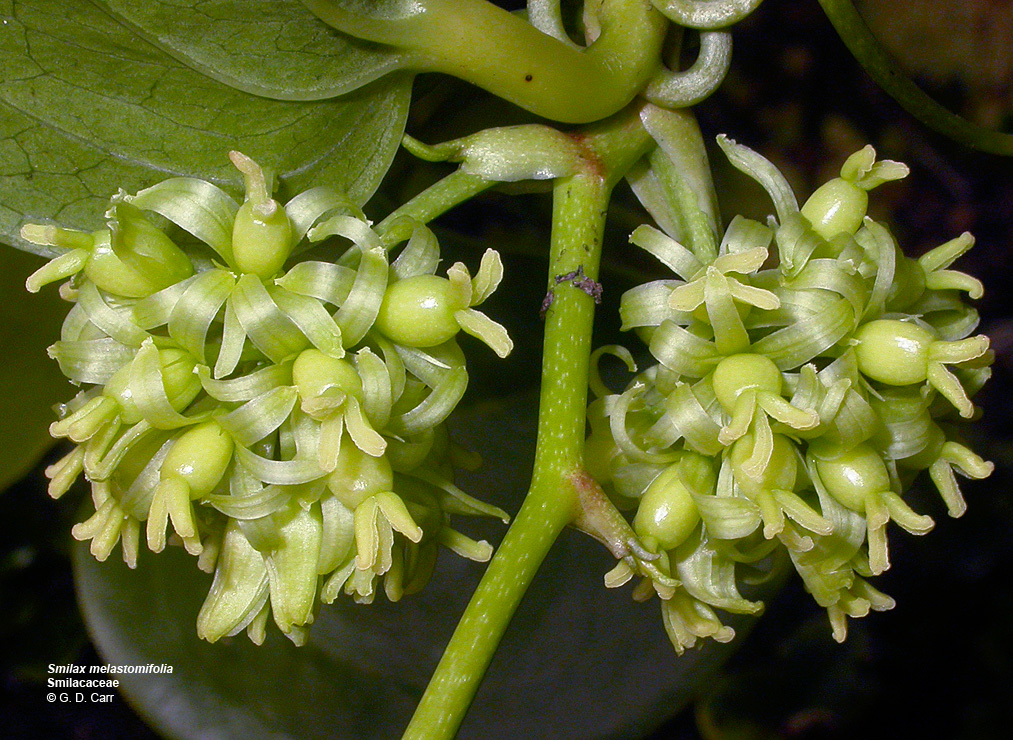 Smilax melastomifolia is a woody, climbing vine (liana) which sometimes has prickles on either the vine or leaves. Smilax has glossy, heart shaped leaves that can grow up to 18 cm long. At the base of each leaf are two twining tendrils that can wrap around other plants to support the vine as it grows. Smilax is dioecious which means that the male (staminate) and female (pistillate) flowers are found on different plants. Both male and female flowers develop in round clusters (umbels)and are pale green to white. The small, fleshy fruit develop from the female flowers and grow to 1 cm in diameter. The fruit are dispersed by birds.

Smilax melastomifolia is endemic in Hawai`i meaning that Hawai`i is the only region in the world in which this species is found. It is found in wet forests and in vegetation adjacent to bogs on all the main Hawaiian Islands (except Ni`ihau and Kaho`olawe) from 180-2,080 meters elevation. The genus Smilax contains almost 300 species including both tropical and temperate species.
The roots of many Smilax species store starch and the roots of Smilax melastomifolia may have been utilized as a famine food by early Hawaiians.
Smilax melastomaifolia is a host plant for the Hawaiian endemic moth species Scotorythra ortharcha (Lepidoptera: Geometridae). The caterpillars feed entirely on the young leaves of this species.
The genus Smilax is named from the greek work "smile" which means “rasping” and is thought to be a reference to the presence of prickles on the stems and leaves of many Smilax species.
(Plowden, C. C., 1970. A Manual of Plant Names, Philosophical Library, New York.)

We currently have 27 herbarium specimens for Smilax melastomifolia in our collection. Click on any specimen below to view the herbarium sheet data.