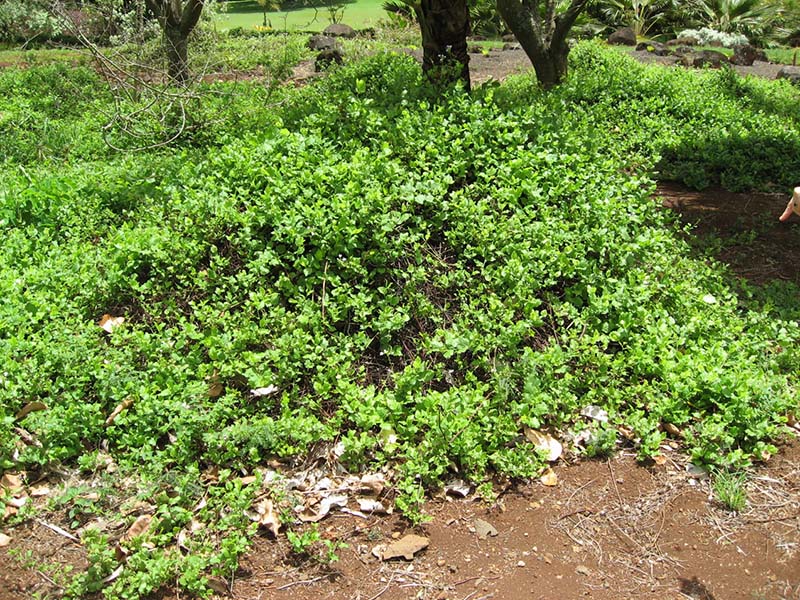 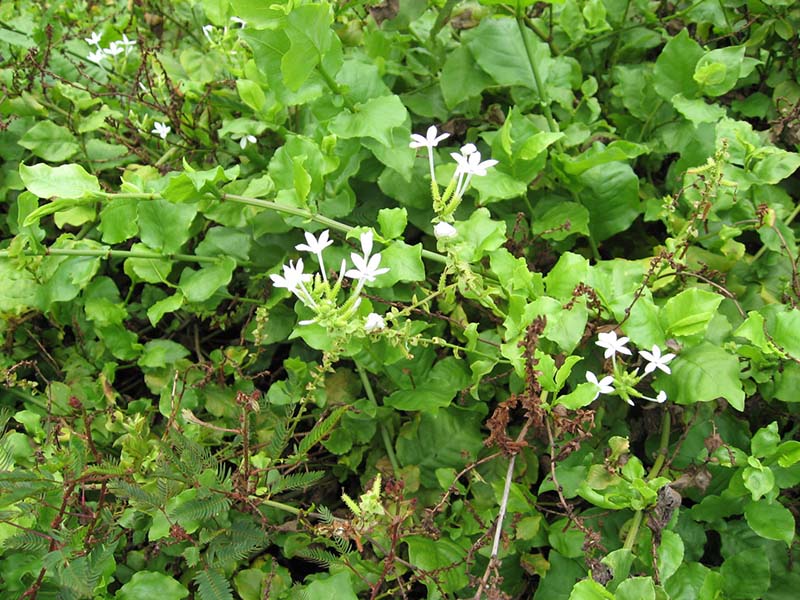 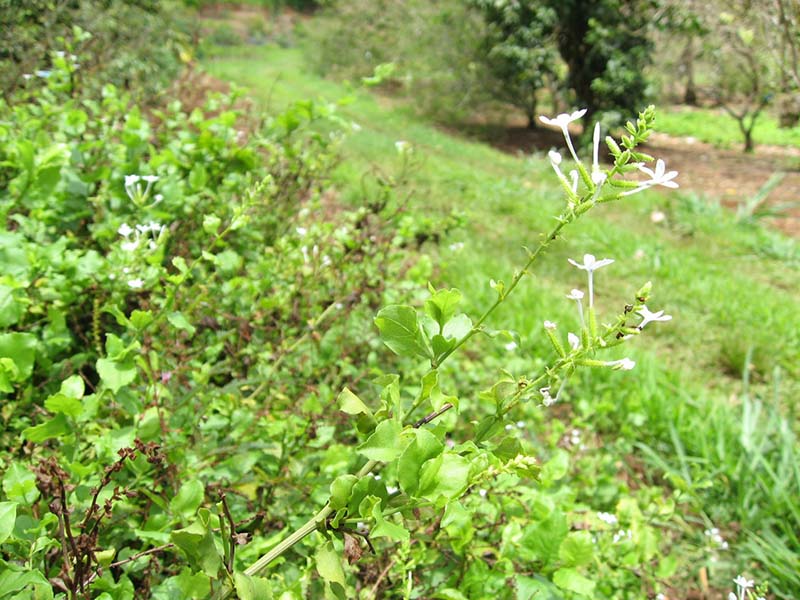 Plumbago zeylanica, known in Hawaii by the common name ‘Ilie‘e, is a shrub that spreads extensively with stems that grow up to 2.5 m long. The leaves are ovate with short lobes at their base and can grow up to 12.5 cm long and 5 cm wide but are more commonly smaller in size. The flowers are produced along a stalk that is 6-30 cm long and the stalk is covered with glandular hairs, which give it a sticky coating. The calyx at the base of the flower forms a narrow tube and is also covered in long glandular hairs. The white petals are fused into a tube that is 18-23 mm long and have five lobes that spread widely. The stamens are inserted into the tube formed by the petals. The fruit is a dry capsule, which splits along a line of weakness at the base of the fruit at maturity. The capsules are 4-5 mm long and contains many small dark purple seeds.

In England the roots and bruised seeds of Common plumbago (Plumbago europaeae) were used for the treatment of toothache. The root of this species contains plumbagine which has antibiotic properties and was applied externally to treat “swellings”. In Asia Plumbago is applied externally as a poultice for the treatment of rheumatism, leprosy, tumors, and ringworm. A recent study investigated the potential of a root extract from Plumbago zeylanica as an antiarthritic and suggests that the extract suppressed the anti-collagen antibody response in mice.

All parts of Plumbago contain the alkaloid plumbagine which can be poisonous both applied externally and taken internally. The sap is irritant and causes blistering when applied to the skin. Plumbago zeylanica is considered to be less poisonous than other species.

(Neal, M.C. 1965. In Gardens of Hawai‘i. Bishop Museum Press, Honolulu, HI.)
The juice from the roots of ‘Ilie‘e were traditionally used in Hawai‘i to provide blue to black coloration for tattoos. The native Iris mau‘u la‘ili (Sisyrinchium acre), the Kukui (Aleurites moluccana) fruit and seed, Sugar cane or Ko stems (Saccharum officinarum), and were also used to produce blue to black pigment.

‘Ilie‘e is native to Old World tropical regions including the Pacific and Hawaiian Islands. It is found in open, high sunlight, exposed habitats including coastal strand, dry forest, and shrubland. In Hawaii this species is found on all the main islands below 610 m elevation. The genus Plumbago contains 10 species in tropical and subtropical regions.

The name Plumbago is derived from the Latin words plumb meaning lead and agre to convey. This may be a reference to the gray coloration left on the hands after handling the root. The Hawaiian name Hilie‘e is derived from the word hili meaning “to stain dark brown” in reference to the use of this plant for blue or black pigment in traditional tattoos.

We currently have 23 herbarium specimens for Plumbago zeylanica in our collection. Click on any specimen below to view the herbarium sheet data.