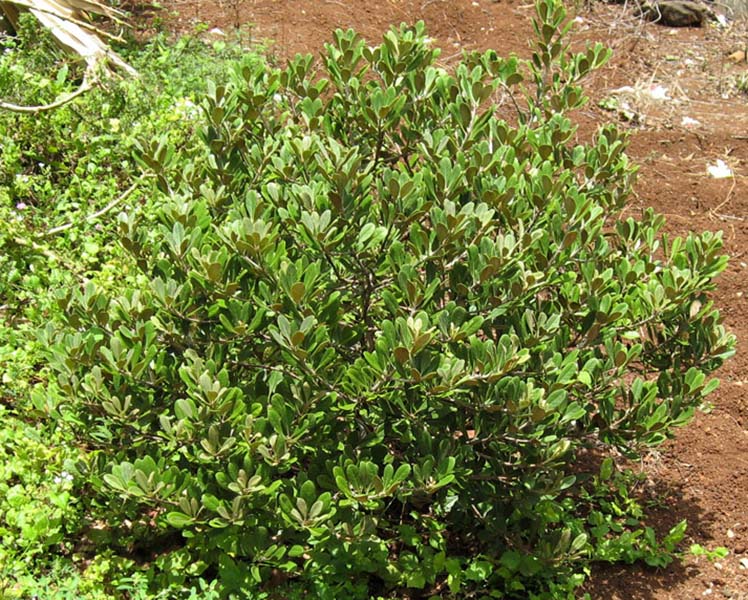 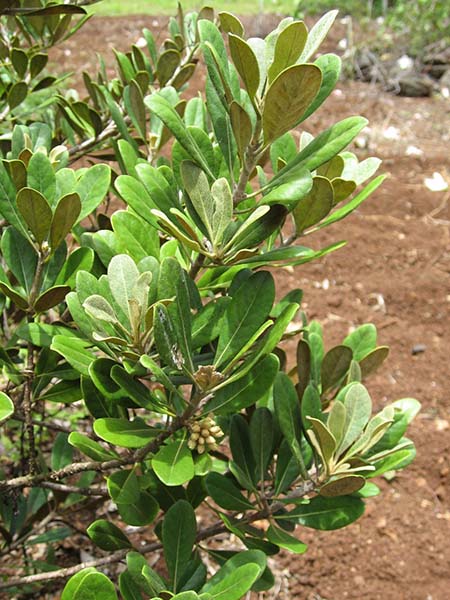 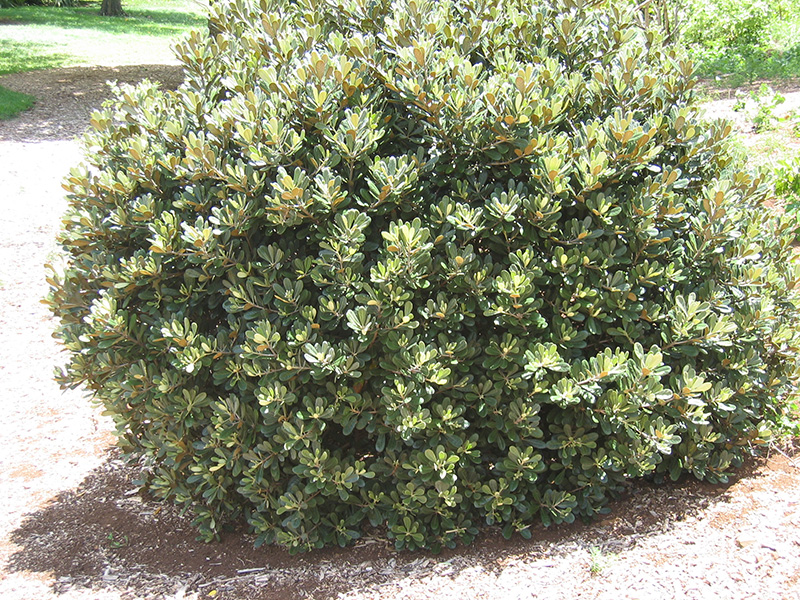 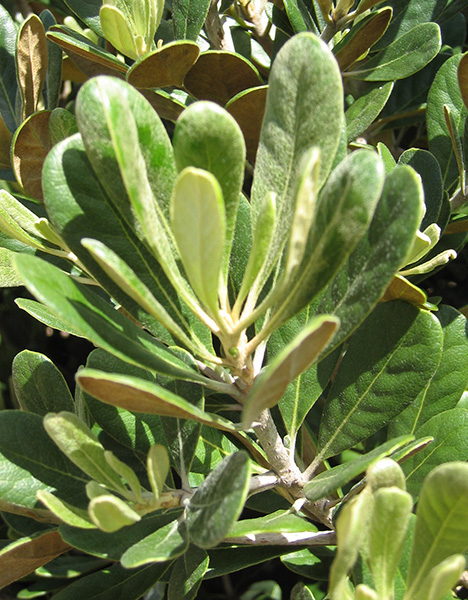 Pittosporum halophilum is a shrub that grows to 1.75 m tall with gray-brown stems. New growth of leaves and stems often appear reddish brown to brown on account of the hairs present on these surfaces. The leaves are alternately arranged but are typically densely clustered at the ends of the branches. The leaves are quite thick and wrinkled in appearance, they are widest above the midpoint of the leaves, and are 7-30 cm long and 3-11 cm wide. The underside of the leaves is covered with long, golden to silver hairs. The flowers of this species can be either bisexual or unisexual, but if unisexual the staminate (pollen producing) and pistillate (ovule producing) flowers are produced on different plants. The white flowers are produced in clusters of 5-14. The sepals that make up the calyx (a whorl external to the petals) are lance-shaped and are covered with dense brown hairs. The white petals are 13-23 mm long and do not open widely forming a bell-shaped flower. The fruit is a dry capsule and is quite large growing to 2.0-3.5 cm long. The outer surface of the fruit is wrinkled in appearance and is covered with dense brown to reddish hairs. The fruit splits open at maturity to reveal 30-50 black to brown, angled seeds that are 4-8mm long.

(Wagner, W. L., Herbst, D. R., and S. H. Sohmer. 1999. Manual of the Flowering Plants of Hawai‘i. Revised Edition. Volume 2. Bishop Museum Special Publication 97. University of Hawai`i Press, Bishop Museum Press, Honolulu, Hawai’i.)
The Hawaiian name Ho‘awa means “to make bitter” in reference to the use of the plant in preparations to treat sickness caused by the presence of evil spirits. Ho‘awa was used as a bath for a sick person who was considered to have been visited by a ghost or to ward of evil spirits and was prepared and administered only by those with the necessary knowledge of spiritual practices.

(Ka‘aiakamanu, D.K. 2003. Native Hawaiian Medicine Vol. III. Honolulu, HI.)
The presence of Pittosporum halophilum in only two remaining populations makes it vulnerable to extirpation through random natural disturbance such as land-slides and current conservation efforts are focused on establishing ex-situ populations, including individuals in botanical gardens, to safeguard against loss of the wild individuals. Additional individuals may be present in mesic, coastal cliff vegetation of Moloka‘i, however, the steep topography and difficult access makes surveying suitable locations challenging.

(Wood, K. 2005. Pittosporum halophilum NTBG Field data (Unpublished). Accessed online on 9 August, 2007 at http://www.state.hi.us/dlnr/dofaw/cwcs/files/Florafactsheets/ Pit_halplantNTBG_W.pdf.)
Pittosporum halophilum is found on the windward side of Moloka‘i in mesic vegetation on coastal cliffs. Only three Pittosporum halophilum species are currently known, one that occurs on Kuka‘iwa‘i Peninsula and two on the offshore islet, Okala. The genus Pittosporum contains 150 species that are found in tropical and warm temperate regions including Africa, Asia, Australia, Hawaii, Malesia, New Caledonia, New Zealand, and in the Pacific Islands of Fiji, Rarotonga, Samoa, the Society Islands, and Tonga.

The Hawaiian name Ho‘awa means “to make bitter” in reference to the use of the plant in preparations to treat sickness caused by the presence of evil spirits. Preparations of this plant were used only by those with the knowledge of spiritual practices to bath a sick person who was considered to have been visited by a ghost or to ward of evil spirits.

Pittosporum halophilum is considered “Critically Imperiled” in the Hawaii Natural Heritage Ranking. It is a “genetic safety net species” as it is represented by less than 50 individuals in the wild and is therefore monitored in the wild.

(Wood, K. 2005. NTBG Field data (Unpublished). Accessed online on 9 August, 2007 at http://www.state.hi.us/dlnr/dofaw/cwcs/files/Florafactsheets/Pit_halplantNTBG_W.pdf.)
The genus Pittosporum has a center of diversity in Australia with high endemism in both New Caledonia and New Zealand. Eleven species are native in Hawai‘i including the widespread Pittosporum glabrum and P. confertiflorum. The widespread distribution of Pittosporum throughout the Pacific is thought to be a result of dispersal of the seeds by birds. The inner surface of the capsule is brightly orange to red and the black seeds are covered in a fleshy, resinous substance, which makes them attractive to birds. The Hawaiian species are thought to be the result of a single introduction to Hawaii followed by extensive radiation based on the study of the genus using both morphological and DNA sequence data. The Hawaiian species are most closely related to Pittosporum species in Fiji and Tonga.

We currently have 22 herbarium specimens for Pittosporum halophilum in our collection. Click on any specimen below to view the herbarium sheet data.