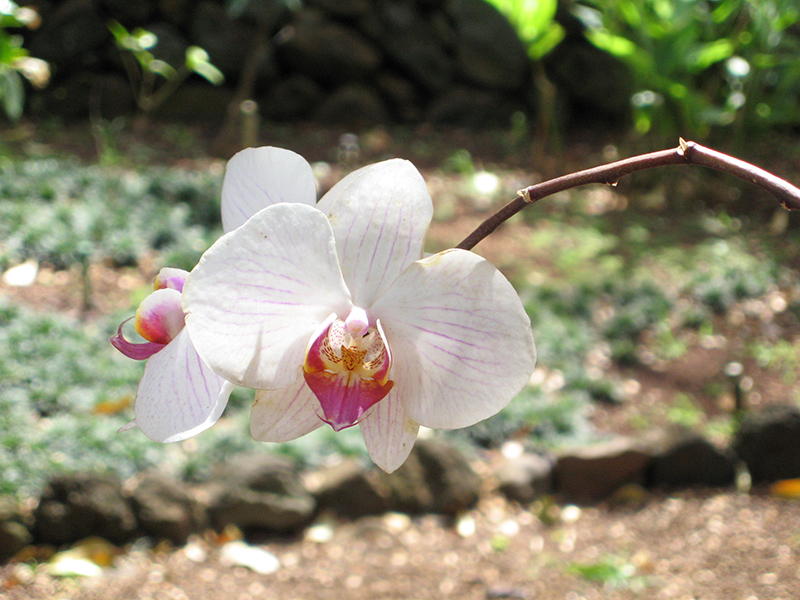 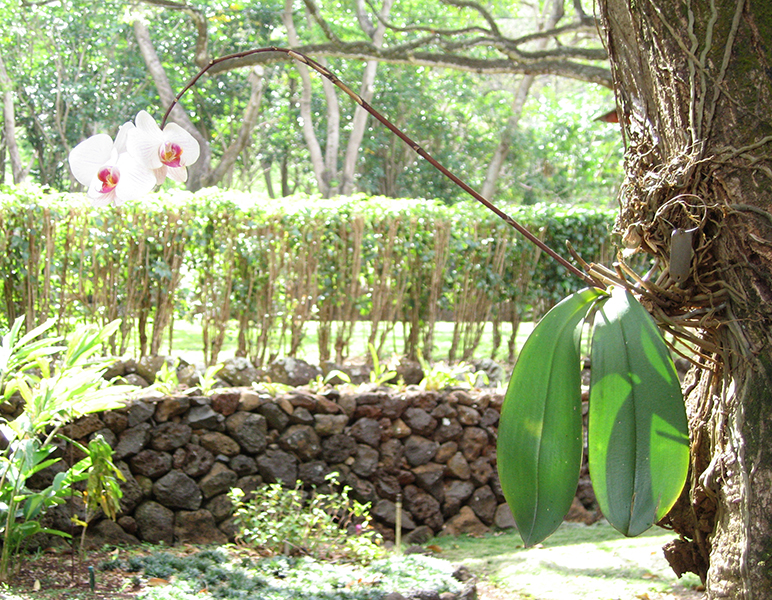 Phaelanopsis orchids are often epiphytic and produce few oblong, fleshy or leathery leaves basally clustered on a short stem. The leaves are often fleshy as they function to store water for the plant. Many plants have well developed aerial roots that serve to attach the plant to the tree or structure on which they are growing. Phaelanopsis orchids are often referred to by their common name, Moth orchid, describing the large lateral petals in the flowers that resemble moth wings. The flowers are borne in an arching inflorescence and are very showy. The flowers of this cultivar are large, with three white tepals (outer petal-like structures), two white lateral petals and a third pink petal, called the lip, in the center of the flower that is strongly modified. The lip of orchids attracts pollinators and provides a landing platform for access to the inner floral parts. The lip is fused to the pollen- and ovule-producing structures in the flower.

Many orchid species are epiphytic and have adaptations to this growth habit. The seeds of epiphytic plants germinate on structures other than the ground, and often become established in the branches of trees or in the crevices of tree bark. These environments are vulnerable to drying out therefore many epiphytic plants possess structures that function for water storage. The fleshy leaves of Phalaenopsis orchids store water that maintains hydration of the plant during dry periods. Many orchids also have a structure called the ‘velamen’ on their aerial roots. The velamen is a spongy layer of cells on the outer surface of the aerial roots that appears silver when dry and whitish green when wet. The velamen has thickened cell walls that hold water and also functions as a protective layer for the roots.

The genus Phaelanopsis contains 66 species and has a center of diversity in tropical Asia and the Pacific, including Indonesia, Thailand, Vietnam, the Philippines, and Myanmar. From this center of diversity Phaelanopsis species extend to Sri Lanka and southern India in the west, Papua New Guinea to the east, southern China and Taiwan to the north, and northern Australia to the South. Phaelanopsis is cultivated throughout the world as an ornamental plant and is ranked globally by the International Floriculture Quarterly Report as the second most valuable potted plant.

Another orchid, Vanilla planifolia, is the source of vanilla. Vanilla is obtained from the fruit of this species and therefore hand pollination is carried out to ensure that fertilization occurs so that the fruit develop.
The fruit undergo a lengthy processing involving air drying and fermentation in order to bring out the aroma and flavor of the vanilla.

(Simpson, B. B. and M.C. Ogorzaly. 2001. Economic Botany. McGraw Hill, Boston, MA.)
While the seeds of many plants contain nutrients necessary for germination, orchid seeds contain little or no such nutrients. Orchid seeds must form a symbiotic relationship with a fungus for successful germination to occur. The fungi, known as mycorrhiza, infect the seeds and allow for water uptake and the conversion of starch to energy, which is used by the seed for germination and growth of the seedling. Without the fungi germination would not be possible.
Systematic research indicates that the genera Doritis and Kingidium, which have previously been recognized as distinct, should be treated as part of Phalaenopsis. All naturally occurring Phalaenopsis species, with the exception of a single naturally occurring polyploid, have 38 chromosomes.