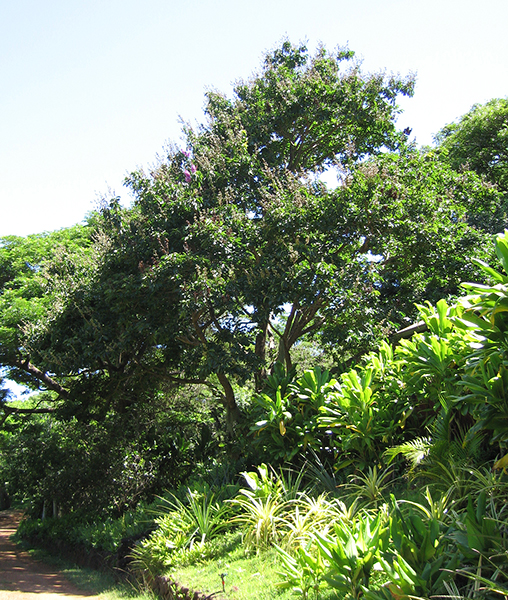 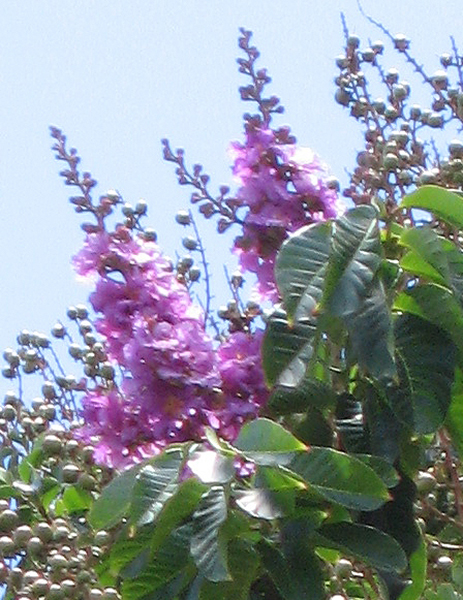 Lagerstroemia speciosa, also known by the common name Pride-of-India, is a shrub to large tree with multiple trunks or stems diverging from just above ground level. This species can grow up to 15 m in height and has a wide spreading crown. The bark is distinctive as it is light brown in color and often peels from the trunk in large regions revealing the smooth new bark that is forming underneath. The leaves of Pride-of-India are oblong, are up to 30 cm long and 13 cm wide, and are quite leathery. The flowers of this species are variable in color, with white, purple, and lavender flower color forms often seen. The flowers are produced in clusters at the tips of the branches so during flowering season create an attractive shot of color amongst the green foliage. The flowers are up to 7.5 cm wide and have five petals that appear crumpled, which is a characteristic of the Loosestrife family. The yellow color in the center of the flower is the stamens that produce the pollen with 130 to 200 stamens found in a single flower. The fruit is a capsule, which is dry at maturity and splits open to release the winged seeds.
Lagerstroemia speciosa leaves are utilized in the Philippines as a folk medicine for the treatment of diabetes and kidney diseases. In laboratory experiments leaf extracts are reported to stimulate glucose uptake in a dose-dependent manner in similar ways to insulin. Unlike insulin, these extracts do not appear to produce lipid synthesis therefore may be suitable for the treatment of hyperglycemia and obesity resulting from type II diabetes.
The fruit are used India to cure mouth ulcers. The roots are also considered astringent and the seeds narcotic.

In India, the wood is used for railroad sleepers and the construction of furniture, wagons, and buildings. The wood is resistant to waterlogging and therefore is valuable for the construction of boats. Archaeological remains of Lagerstroemia speciosa wood dating to 7500 years ago illustrate the resistance of this species, with the cellulose in the fiber walls and heavily lignified cell walls still remaining intact. The bark is thin and easily injured. A tea produced from the leaves of Lagerstroemia speciosa is currently available.

This species has a widespread distribution in China, Southeast Asia, and Australia. It is native in China, Cambodia, Myanmar, Thailand, Vietnam, Indonesia, Malaysia, and the Philippines. This species is widespread in cultivation in tropical regions. It was introduced to Hawai‘i in the early 1900s and the original tree that was planted still survives in the Foster Botanical Garden in Honolulu. The genus Lagerstroemia contains 53 species with a center of diversity in tropical Asia and Australia.
The genus Lagerstroemia was first described by Carlos Linneaus. The name Lagerstroemia recognizes Magnus von Lagerstroem, a Swedish naturalist who provided specimens from the East for Linnaeus.

We currently have 8 herbarium specimens for Lagerstroemia speciosa in our collection. Click on any specimen below to view the herbarium sheet data.