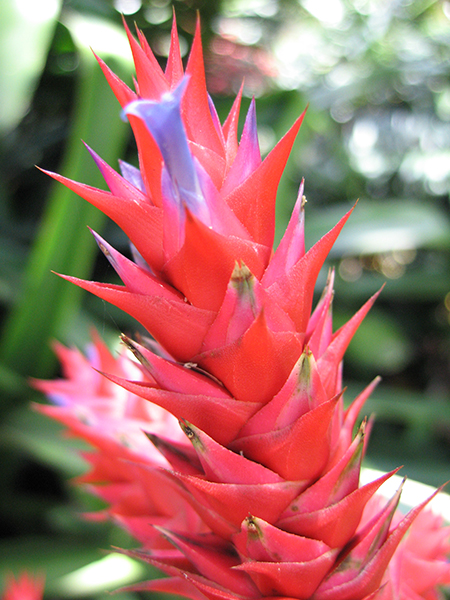 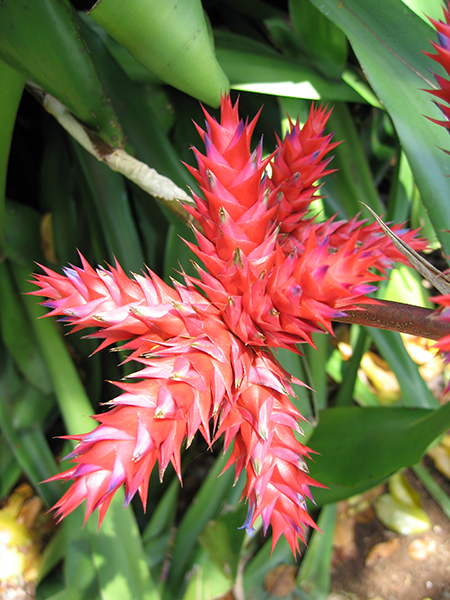 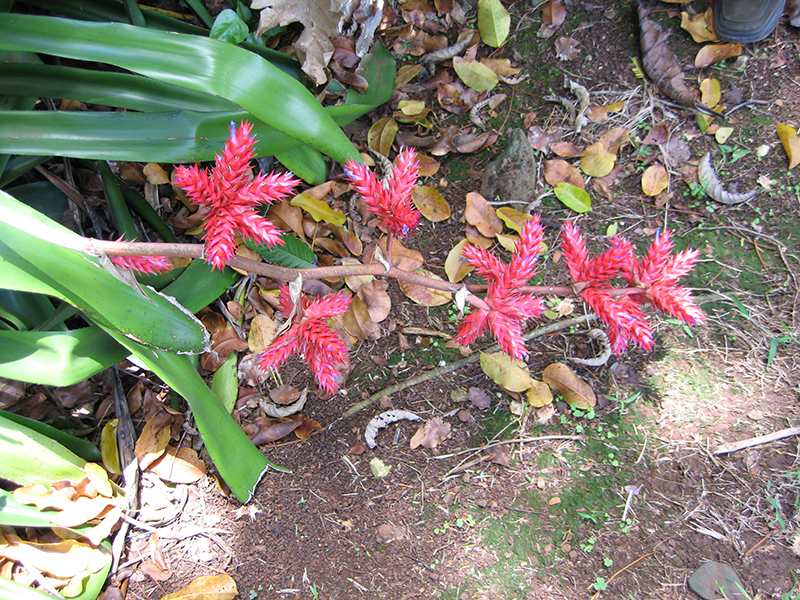 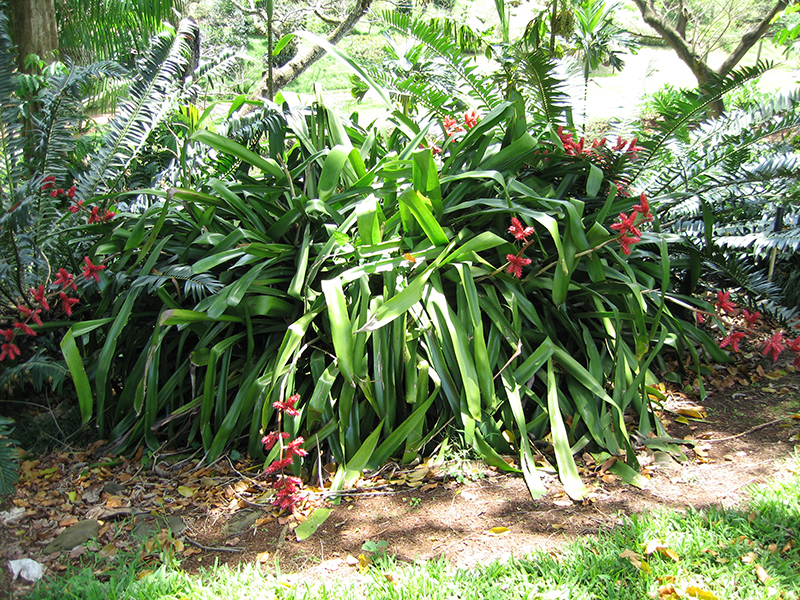 
Hohenbergia stellata is a rosette forming herb that grows to 1.2 m in height. The leaves are strap shaped and have purple to red tips, growing to 1 m in length with finely serrated margins. Hohenbergia species are monocarpic, meaning that each rosette usually produces a single inflorescence and then dies. In cultivated plants this may result in portions of the plant dying back to the root stock, which produces new rosettes. The inflorescence of this species is striking and extends out beyond the leaves reaching 1 m in length. Compact clusters of flowers develop at the tip of this inflorescence. Each cluster contains distinctive red floral bracts within which the purple flowers can be seen. Each flower contains three petals, which are fused to form a long, narrow tube. The ovary, containing the ovules, is inferior meaning it is found beneath the point at which the petals attach to the receptacle. The fruit of this species is a fleshy berry that does not break open to scatter the seeds; instead requires that the outer layers of the fruit rots away to release the seeds, or it may be dispersed by fruit eating animals such as birds.

The epiphytic habit of many members of this family and the bright colors of the flowers makes many species popular as ornamental plants. This species does well in cultivation requiring full sun and soil that is kept dry.
Hohenbergia stellata is native to the cloud and rain forests of eastern Brazil, Martinique, Trinidad, and Venezuela. The genus, Hohenbergia contains 52 species with a center of diversity in Jamaica and a distribution that extends to Venezuela, the Lesser Antilles, Puerto Rico, and Cuba. The genus grows in a wide range of habitats as diverse as coastal sand dunes and cloud forest.

The genus Hohenbergia is named after Prince Hohenberg who supported botanists and the early collection and documentation of plant species.

The taxonomic status of Hohenbergia is currently unresolved with current systematic research indicating that it should be placed within the genus Aechmea. For a long time botanists have recognized the close evolutionary relationship between these two genera. These genera share many morphological characters, such as leaf and floral features, however Hohenbergia has been considered distinct as all species have branching, compact inflorescence whereas Aechmea species have unbranched inflorescences containing flowers that are more widely spaced. Ongoing research that incorporates additional characters, including molecular (DNA) datasets, is necessary to resolve the relationship of these genera.

The family Bromeliaceae, often referred to as Bromeliads, has a center of diversity in tropical America and West Africa. The family contains many genera and species that are primarily epiphytic. This means that the seeds germinate on surfaces above the ground either on tree branches, on fallen logs, or, in urban environments, on fences or power lines. These plants are not parasitic and do not obtain nutrients from the surfaces on which they are growing. They use these structures to get higher into the tree canopy into more open sunlight or, in densely vegetated regions, to find more open space to become established.
Many bromeliads have what is known as a “tank-habit” which means they capture water and decaying plant matter at the base of their leaves and have hairs on the outer surface of their leaves that absorb the nutrients that are captured in these “tanks”. In these plants the roots provide no water uptake and serve only for attachment. This clever strategy is utilized by many bromeliads that grow in substrates that are nutrient poor, therefore creating their own nutrient rich environment to ensure their survival and growth.

We currently have 4 herbarium specimens for Hohenbergia stellata in our collection. Click on any specimen below to view the herbarium sheet data.