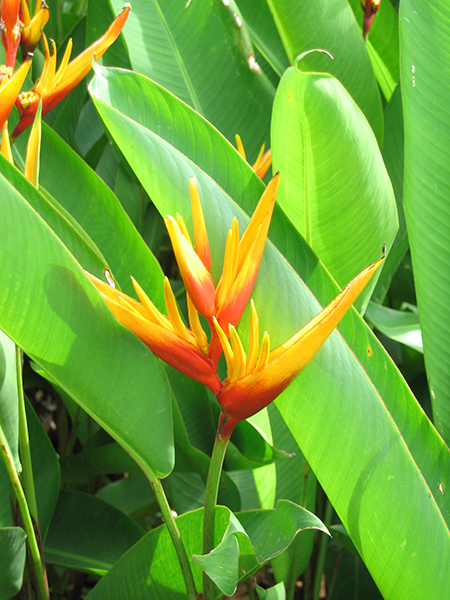 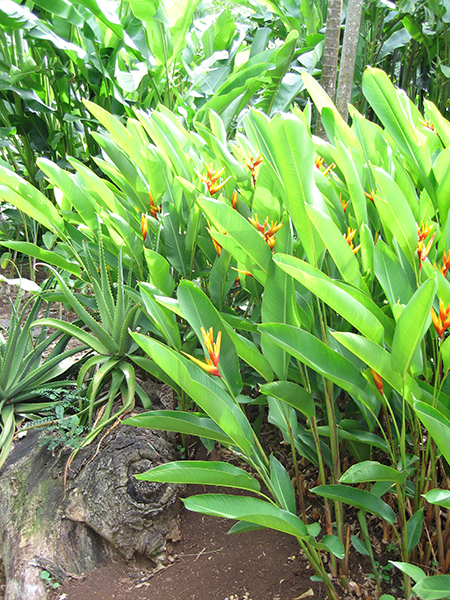 
Heliconia ×nickeriensis grows from 1.2-3 m in height. Heliconia species have one of two types of leaves; those with very short leaf stalks (petioles) that look like ginger leaves and those with long leaf stalks that look more like banana leaves. The leaves of Heliconia ×nickeriensis are the second type with long petioles (22-60 cm) and leaves (40-82 cm in length) that have many conspicuous veins that run from the midvein out to the leaf margin. The inflorescences (flower clusters) of this species are erect and the boat shaped bracts that enclose the flowers are red at the base and yellow to orange at the tip. In one of the parents of this hybrid, Heliconia ×nickeriensis, the bracts are red with, once again, deep yellow apices. Individual Heliconia flowers are 3-parted with 3 green sepals, 3 yellow petals, 6 stamens and an ovary in 3 parts. Heliconia ×nickeriense has orange flowers that are 4-5.5 cm long. In all Heliconia species five of the stamens produce pollen and the sixth is sterile.

(Maas, P.J.M. and M.J.M. de Rooij. 1979. A new Heliconia (Musaceae) from Suriname. Acta Botanica Neerlandica 28(1): 91-92.)
Heliconia ×nickeriensis is a hybrid between H. psittacorum and H. marginata. It has a native range in Suriname and Guyana where it grows in clayey soils adjacent to ditches. This species is one of 10 species found in the Guianas and one of only two species endemic to this region, the other being H. dasyantha. This species is in widespread cultivation.

The generic name Heliconia was first assigned to this taxa in 1793 by Carolus Linnaeus in Genera Plantarum. The genus is named after Mount Helicon in southern Greece. Mt Helicon is the location of the springs, Aganippe and Hippocrene, that were sacred to the Muses and were considered to be the source of poetic inspiration.
In cultivation plants such as Heliconia are often grown from stem cuttings that are known as rhizomes. Rhizomes are underground stems that allow a plant to spread out and form large clusters of plants that are genetically identical. These undergrounds stems grow out from the parent individual and are able to form adventitious roots at intervals along the stem. After these roots have formed vertical shoots are produced that form new above ground structures. These rhizomes allow Heliconia plants to grow in dense clumps and because they are all attached underground the plants in a cluster will often flower simultaneousl.
Search Again