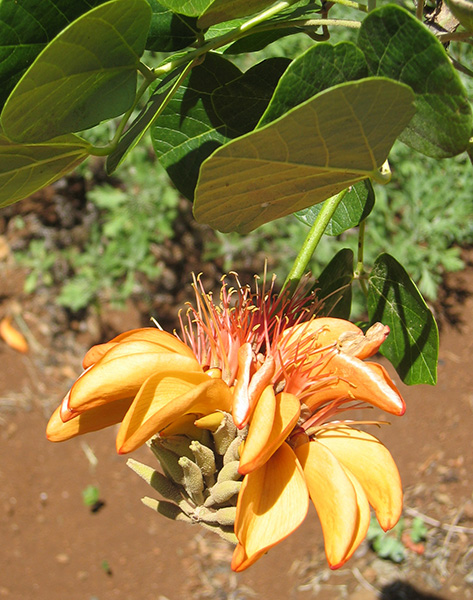 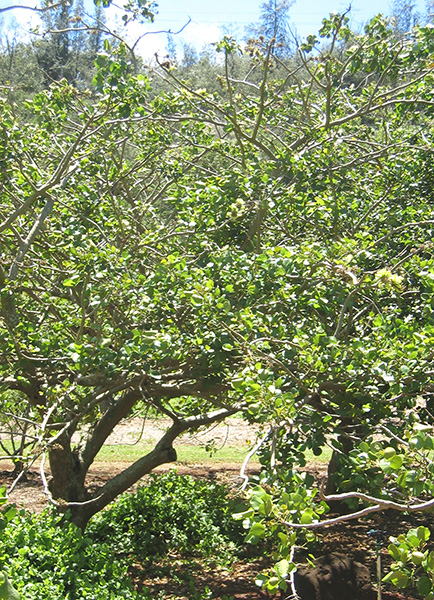 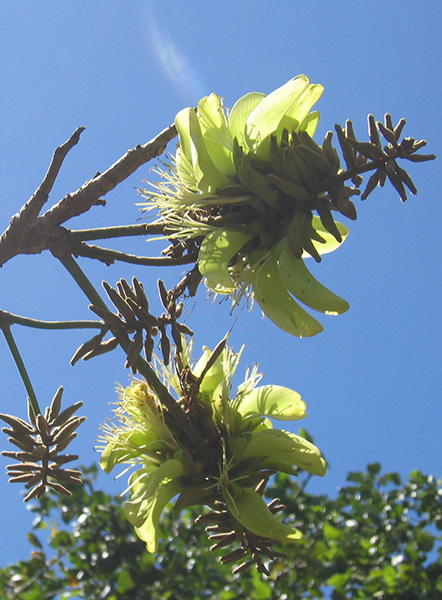 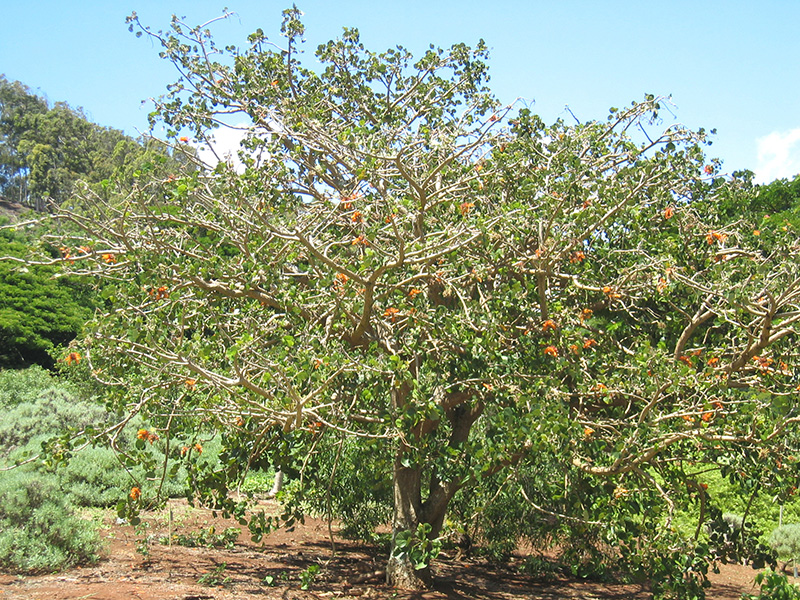 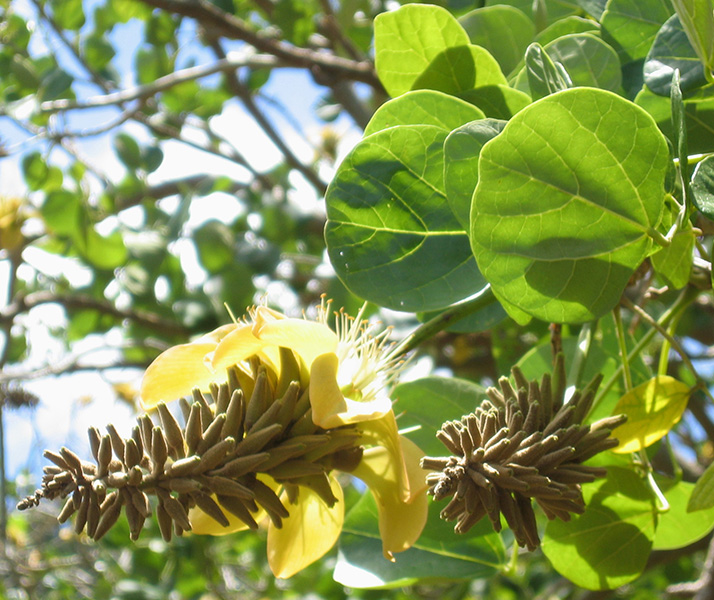 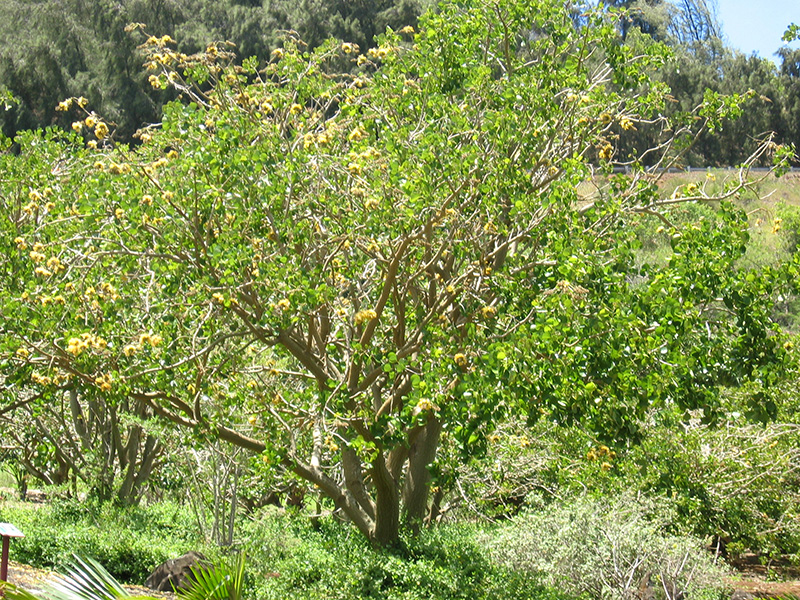 Erythrina sandwicensis is a small deciduous tree 5-15 m tall with a short, stout, crooked or gnarled trunk 30-90 cm in diameter. Spreading branches are stiff, and the broad thin crown is wider than it is high. A champion tree measured on the Island of Hawaii in 1968 was 16.8 m tall with a trunk circumference of 3.8 m.
The bark is smooth, light to reddish brown, and has scattered stout grey or black spines up to 1 cm long. With age, it becomes slightly fissured and thin. Twigs are stout, green with yellow hairs when young and have scattered blackish spines. Leaves are alternate, compound, 13-30 cm long, with a long slender leafstalk. The three leaflets are short-stalked. The end leaflet is larger than the other two. Leaflets are 4-10 cm long and 6-15 cm wide. Erythrina sandwicensis is one of Hawai'i's few deciduous native trees. It loses its leaves during the summer in order to conserve water and puts out new leaves in the fall.
Flower clusters (racemes) are on hairy yellow stalks of 7.4 cm or less. Flowers are crowded in a mass and are 7.5-15 cm long and short stalked. Flower color within natural populations can include orange, yellow, salmon, green and white. This striking color variation is probably unique within the genus. Erythrina sandwicensis blooms after the leaves fall in the summer making the flower clusters very showy. Fruits (pods) are approximately 10 cm long and 13 cm broad, flattened, and pointed at both ends. They are blackish and slightly narrowed between seeds. Mature pods are found on the trees during winter months (December to February). Pods contain 1-4 elliptical, shiny red orange seeds 13-15 mm long. The Hawaiian name, Wiliwili, means repeatedly twisted and refers to the seed pods which twist open to reveal the seeds. Pods usually contain 1 to 3 seeds, but may contain as many as 6 seeds. The seeds are red or orange and about 1/2 inch long. The seeds can easily be removed from the pods by hand.
(Bornhorst.1996; Criley.1998;Criley. 1999;Lilleeng-Rosenberger.1996;NTBG. 1992; NTBG. 1996; Stratton. 1998; Obata. 1967; Wagner.1990.)
(Little,E.L.and Skolmen,R.G. 1989. Common forest trees of Hawaii.)
(Neal,M.C. 1965. In Gardens of Hawaii.)
Wiliwili is now being used in revegetation programs using endemic species to rehabilitate highly eroded areas in Hawaii. It survives extended drought and high winds, but growth is slow under such harsh conditions.

The wood is reported to be the lightest of Hawaiian wood. It was used for surfboards, canoe outriggers, and fish net floats. Degener reports that the practice of using Wiliwili wood for outriggers was abandoned because Hawaiians believed that sharks followed such canoes. They also believed that trees bearing orange-red flowers possessed more durable wood than those bearing lighter colored flowers.
The bright red seeds were used for making leis. Captain Cook was reportedly given a lei made of Wiliwili seed when he visited the islands in 1778.
Wiliwili has been planted as living fences.
(Degener,O.1973. Plants of Hawaii National Parks, Illustrative of Plants and Customs of the South Seas.)
(Degener,O. 1940. Flora Hawaiiensis:Leguminosae.)
(Neal,M.C. 1965. In Gardens of Hawaii.)
(Rock,J.H. 1913.The indigenous trees of the Hawaiian Islands.)
(Little,E.L.and Skolmen,R.G. 1989. Common Forest Trees of Hawaii.)
(Degener,O. 1940. Flora Hawaiiensis: Leguminosae.)


Erythrina sandwicensis is an endemic Hawaiian tree. It grows is the dry forests of the leeward slopes of all of the main islands from sea level to an elevation of 1,950 feet.
(Wagner. 1990.)

The Hawaiian name, Wiliwili means, "repeatedly twisted" and refers to the seedpods, which twist open to reveal the seeds.
This species is strongly linked to Hawaiian culture through legends and proverbs. One legend refers to the different appearances of this species in the transformation of three sisters into Wiliwili trees. According with the legend, a bald sister becomes a tree with no leaves, a sister with wind-tossed hair becomes a tree with fluttering leaves, and a hunchbacked sister becomes a gnarled tree.
(Neal,M.C. 1965. In Gardens of Hawaii.)

We currently have 26 herbarium specimens for Erythrina sandwicensis in our collection. Click on any specimen below to view the herbarium sheet data.