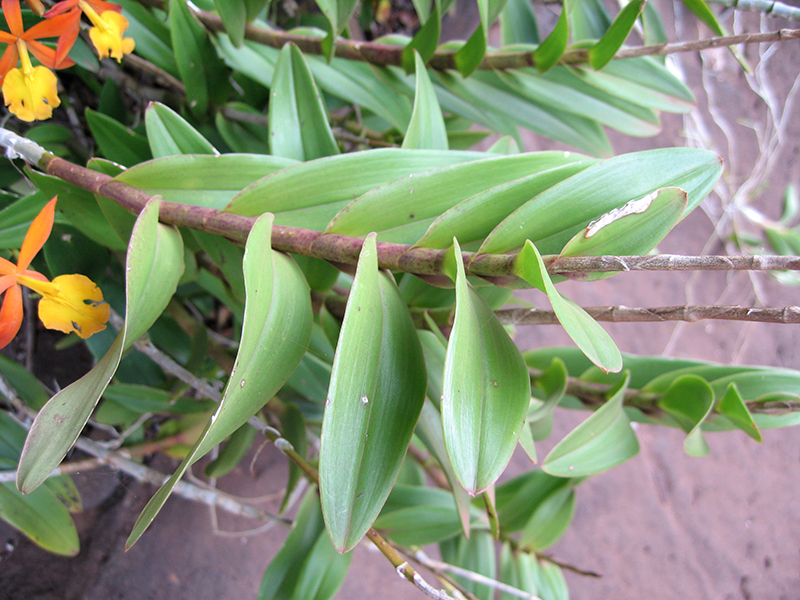 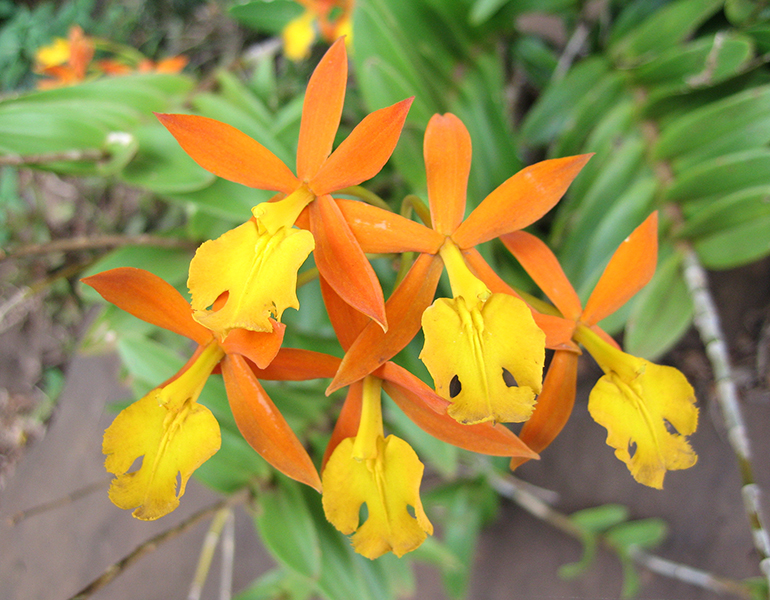 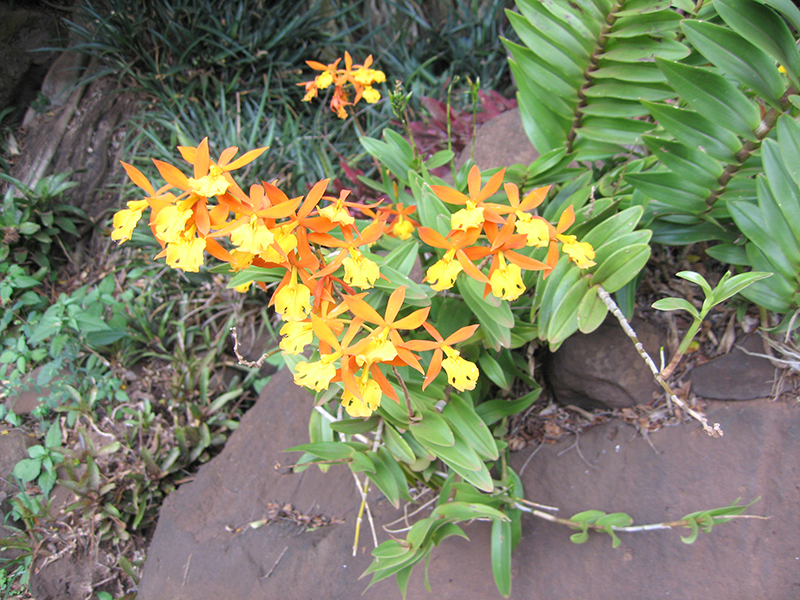 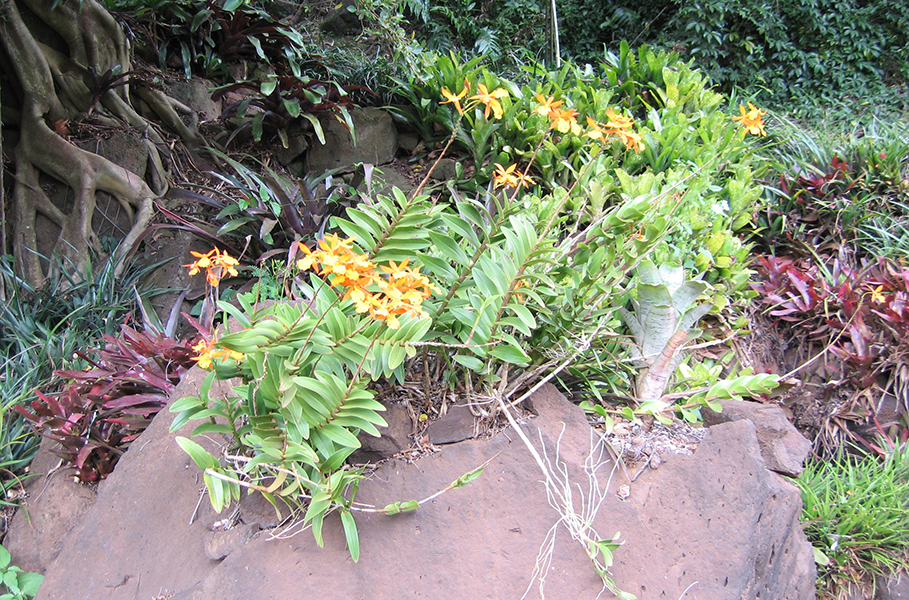 Epidendrum ‘Orange Blaze’ is a cultivated orchid that is the product of a cross between Epidendrum cinnabarinum and an orchid cultivar called ‘Morning Star’. ‘Morning Star’ is also of hybrid origin and is the result of a cross between Phaius mishmensis and Phaius tankervilleae. Epidendrum species are typically epiphytic and Epidendrum ‘Orange Blaze’ can grow as either an epiphyte or rock-dwelling plant with erect stems up to 1.1 m in height. The leaves lie in a single plane and are alternately arranged along the stem. This cultivar is placed in the group of Epidendrum species referred to as the “reed-stem” Epidendrums. The flower spikes of Epidendrum ‘Orange Blaze’ grow to 76 cm and can produce up to 40 flowers. Orchid flowers are 3-parted with three (outer) sepals and three (inner) petals. The flowers of this species are 5 cm in diameter and the sepals and two of the petals are orange. The third petal is yellow in this species and is highly modified to form a structure known as the “lip” or “labellum” which is three lobed. In all Epidendrum species, the lip is fused to pollen- and ovule-producing structures to form a slender tube in the center of the flower.
The genus Epidendrum contains around 1500 species of which 50 are in cultivation. Although it has a center of diversity in the American tropics it extends into the temperate Southeastern United States as far north as South Carolina. Epidendrum cinnabarinum is native to Brazil.

Another orchid, Vanilla planifolia, is the source of vanilla. Vanilla is obtained from the fruit of this species and therefore hand pollination is carried out to ensure that fertilization occurs so that the fruit develop. The fruit undergo a lengthy processing involving air drying and fermentation in order to bring out the aroma and flavor of the vanilla.

All orchids have highly modified flowers and many are pollinated by only one or a small number of specialized pollinators. Flowers produce both visual and aromatic cues to attract pollinators and entice them to visit so that they will transfer pollen between flowers and therefore allow fertilization to occur and fruits to be produced. The modified petal that is known as the ‘lip’ in orchid flowers and the color variation in flowers all serve as visual cues that direct pollinators to visit the sexual structures of the flower. Many orchids also produce nectar, which contains sugar, as a reward to entice pollinators to visit. As nectar can be expensive to produce some orchid species don’t produce nectar, but attract pollinators by mimicking the flowers of nectar producing species.

While the seeds of many plants contain nutrients necessary for germination, orchid seeds contain little or no such nutrients. Orchid seeds must form a symbiotic relationship with a fungus for successful germination to occur. The fungi, known as mycorrhiza, infect the seeds and allow for water uptake and the conversion of starch to energy, which is used by the seed for germination and growth of the seedling. Without the fungi germination would not be possible.

The name Epidendrum combines the greek words epi- meaning on top of, and dendro- meaning tree in reference to the epiphytic habit of many Epidendrum species. The names of many orchids reflect their hybrid origins such as the genus x Epicattleya, which is a cross between Epidendrum and Catleya orchids.

We currently have 2 herbarium specimens for Epidendrum hybrid in our collection. Click on any specimen below to view the herbarium sheet data.