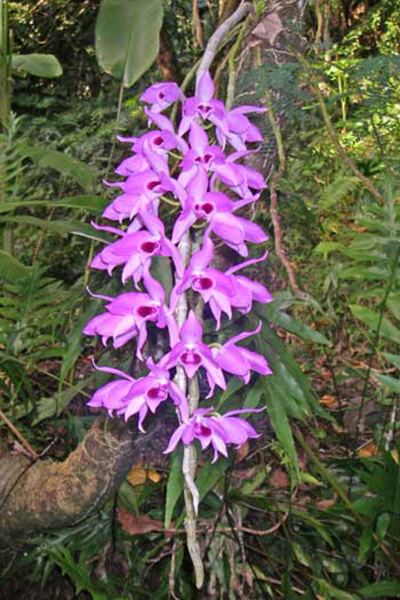 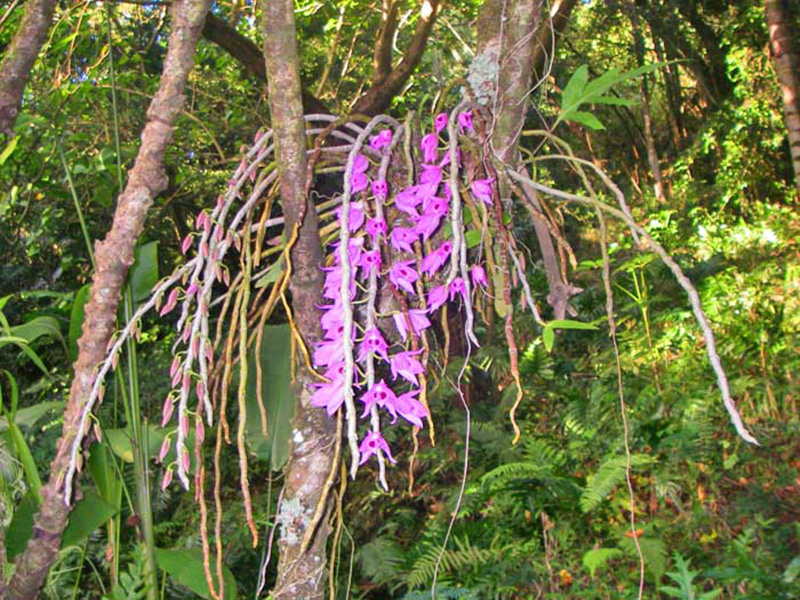 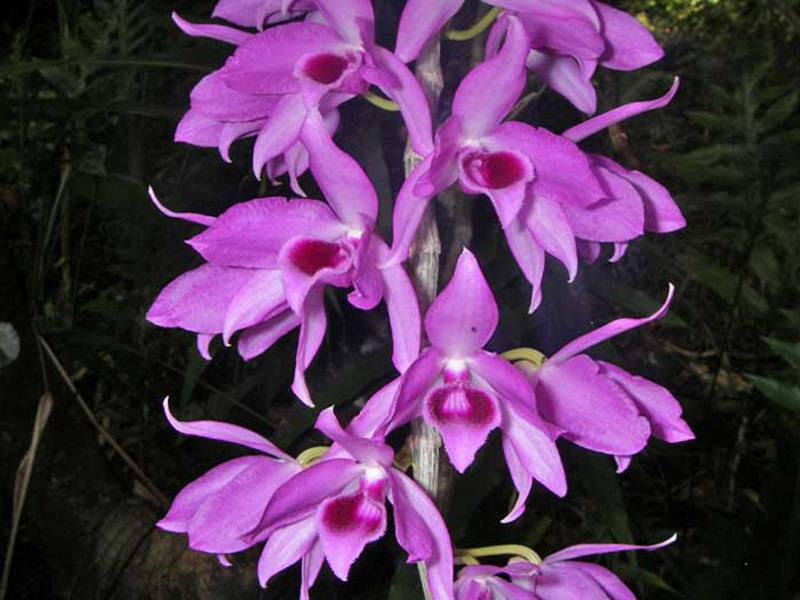 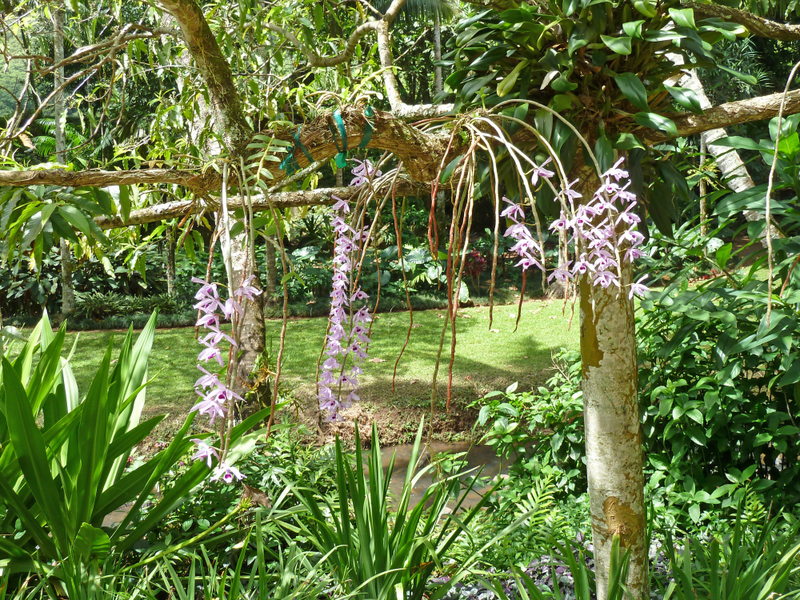 
Honohono, or Dendrobium anosmum, is an epiphytic plant that is said to be “deciduous” as it loses its leaves prior to flowering. The plant persists through the production of rhizomes, which are stems that spread out along the surface on which the plant is growing. Buds on the rhizomes develop to produce hanging stems on which leaves are produced. In its native habitat these stems can grow from 1.2 to 3.0 m in length but are usually only 30-60 cm when grown in cultivation. In Dendrobium orchids the stems on which leaves are produced are known as pseudobulbs, a term meaning false bulbs. Like bulbs, pseudobulbs serve as storage organs for the plant. The leaves of Honohono are slightly fleshy and strap-shaped. Honohono flowers are purple-pink and are produced in small clusters of 3-4 flowers. An albino variety, Dendrobium anosmum var. huttonii, exists with white flowers. Honohono fruit are dry at maturity and split open along 3 slits down the length of the dry capsule to release hundreds of small seeds
Honohono or Dendrobium anosmum is one of the orchid species that is commonly used for leis in Hawaii. The purple flower variety is predominant in lei production but the white flowered variety and hybrid cultivars are also used. This species is popular for lei production because it is relatively long-lasting with flowers staying fresh for up to four days and does not crush easily. Flowers that become a little dry can be revived by placing in water for 10 minutes.
Dendrobium anosmum is native the Philippines, New Guinea, Thailand, and Sri Lanka. The genus Dendrobium contains approximately 900 species making it one of the largest genera in the Orchidaceae. The center of diversity of the genus is in the Old World Tropics, with a large diversity of species in the Himalayas, Australia, New Guinea, and the Philippines.

Orchids are susceptible to a large number of plant diseases including Cymbidium mosaic virus and Odontoglossum ringspot virus. These viruses result in spotting on leaves and flowers as a result of the death of the plant tissues and a reduction in the vigor of the plant and flower production and are transmitted through contaminated garden tools. To prevent contamination of orchid plants strict sanitation protocol must be carried out, however, the potential for contamination of plants remains high through the introduction of contaminated seed or the manipulation of contaminated plants without symptoms.

Dendrobium orchids are often said to be either “deciduous” or evergreen. “Deciduous” dendrobiums are adapted to monsoonal climates. Periods of high water availability stimulate leaf production and vegetative growth. Long dry periods when little water is available stimulate flower production in deciduous Dendrobium species. In addition, Dendrobium requires a period of low temperature which causes the plant to lose its leaves and, during dry months, stimulates flowering. In its native habitat, Dendrobium anosmum will tolerate temperatures as low as 50oF but is tolerant only to 60oF in cultivation.
Orchid production contributes significantly to the horticultural industry in Hawaii with the orchid sales valued at $22.4 million in 2004. An extensive breeding program was established at the University of Hawaii at Manoa in 1950 which provides seed propogated hybrid plants for the orchid growers around the state. This program has produced many new hybrid orchid varieties for use in the cut flower and ornamental plant industries.
(University of Hawaii at Manoa. 2005. CTAHR Research News 1(2): 1-5.)