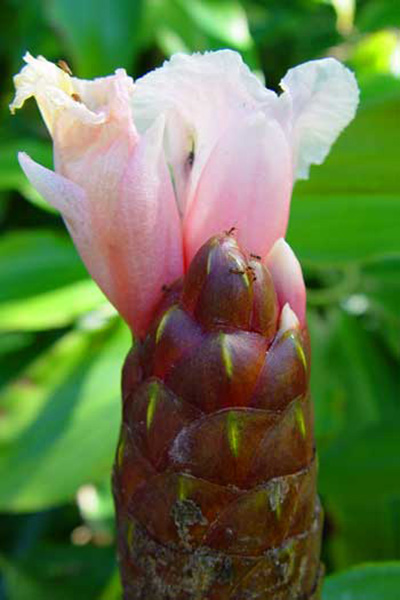 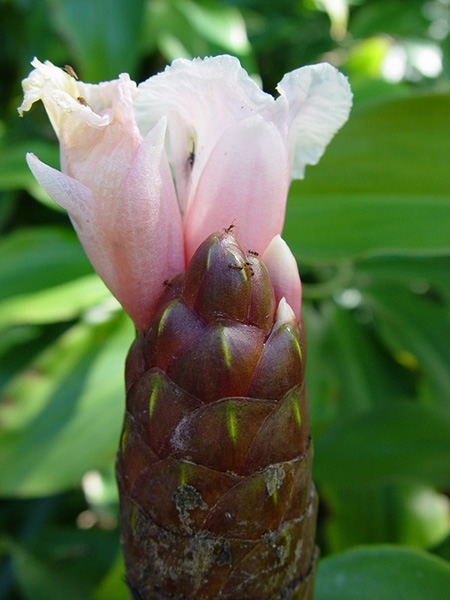 
Costus laevis is an understory herb that grows from 2 to 6 m tall. The leaves of all Costus species are arranged in a single spiral up the stem. The leaf blades are lance-shaped (15-60 cm long x 5-15 cm wide), with a silver-white midvein, and a light purplish leaf stalk that clasps the stem. The flowers are produced in a terminal, elongate spike-like cluster (5-10 cm long) that is made up of densely packed green to purple bracts each of which has a nectary gland just below the pointed tip of the bract. A single showy flower is produced within each bract and each has six purple-red tepals streaked with white including three short outer tepals and three larger tubular inner tepals. Of the six stamens (pollen producing structures) in each flower only one produces pollen and the remaining five are fused to form a large, showy lip that is often visible above the tepals. The fruit is a dry capsule that does not break open to release the seeds. The seeds are approximately 2 mm in diameter and are covered by a waxy coating.

Many Costus species are able to reproduce by two methods. The first known as vegetative reproduction involves the production of horizontal stems that spread out from a parent plant from which vertical stems, which develop into new individuals, may be produced. The second method is through sexual reproduction through the production of flowers, the transfer of pollen to the ovules for fertilization to occur, and the formation of seed. Each of these methods of reproduction have different benefits: vegetative reproduction is energetically cheap for the plant but produces individuals that are exactly the same as the parent plant (clones), whereas sexual reproduction is energetically more expensive for the plant, but produces individuals that are slightly different to the parents that may be better adapted to the habitat in which they grow.
Costus laevis is native to Central America and western South America where it is found in primary and secondary humid forest below 900 m in elevation. It is often found in the understory of treefall gaps and along the edges of streams or on forest edges. The genus Costus contains about 90 species that are distributed throughout the tropical regions of the world with a center of diversity in Central America.

In its native range, Costus laevis flowers during the wet season from May to August and produces fruit from October to November. Typically only a single flower is open at a time in an inflorescence and each flower opens early in the morning and falls by late afternoon. The flowers are pollinated by euglossine bees. The seeds have a waxy coating on the seed surface and are dispersed by birds.

Study of the reproductive biology of Costus laevis indicates that it is self compatible. This means that pollen produced in a single flower is able to fertilize an ovule produced in the same flower and seed will be produced. This process is known as “selfing” in plants. Alternatively, in the process known as “outcrossing”, pollen from one flower is transferred to a different flower by an insect or bird pollinator and seed will also be produced. Experimental study of Costus laevis reproduction indicate that seed production is lower in selfed versus outcrossed plants and while seeds produced by selfing have a similar rate of germination to seeds produced through outcrossing, the resulting plants are smaller and produce less biomass than those grown from outcrossed seeds.

We currently have 1 herbarium specimens for Costus laevis in our collection. Click on any specimen below to view the herbarium sheet data.