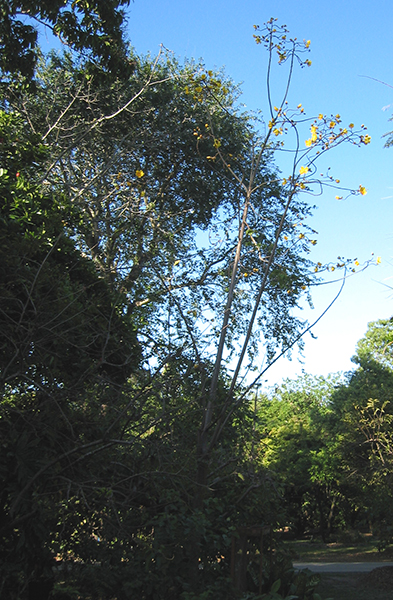 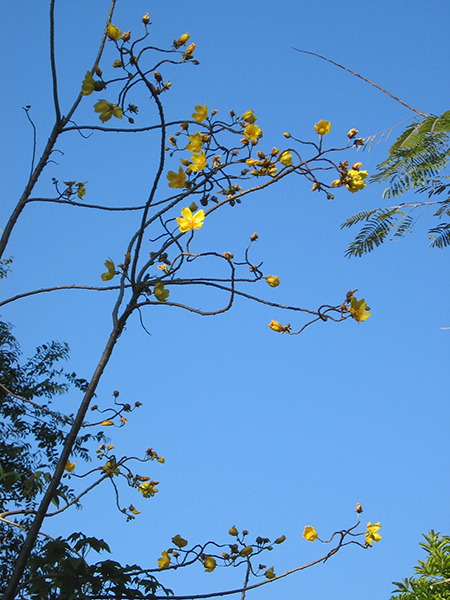 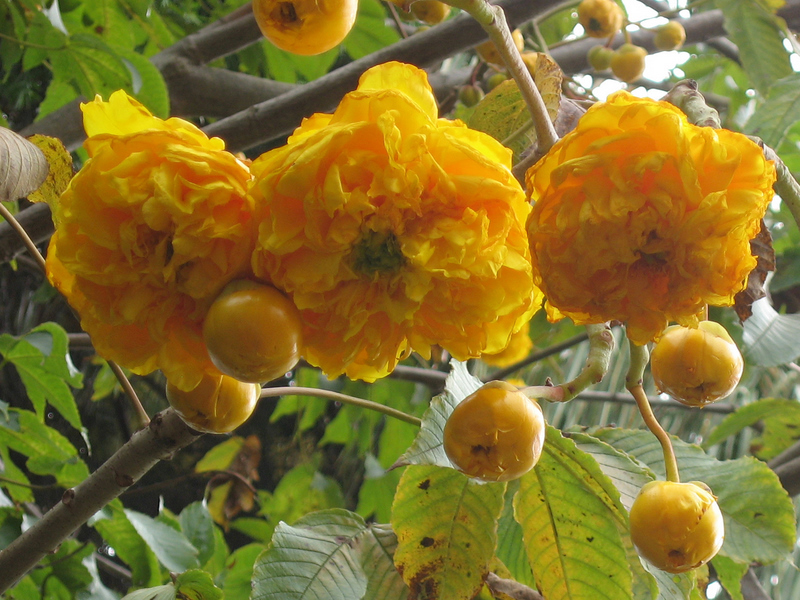 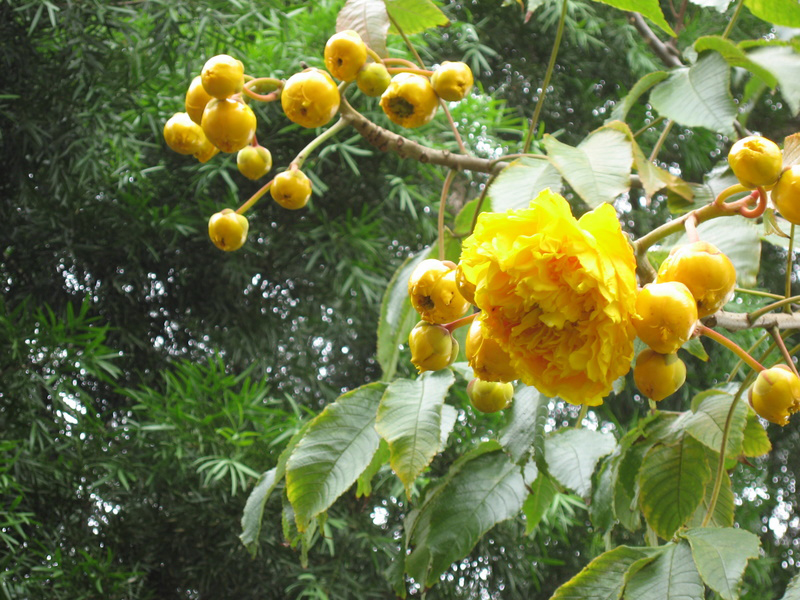 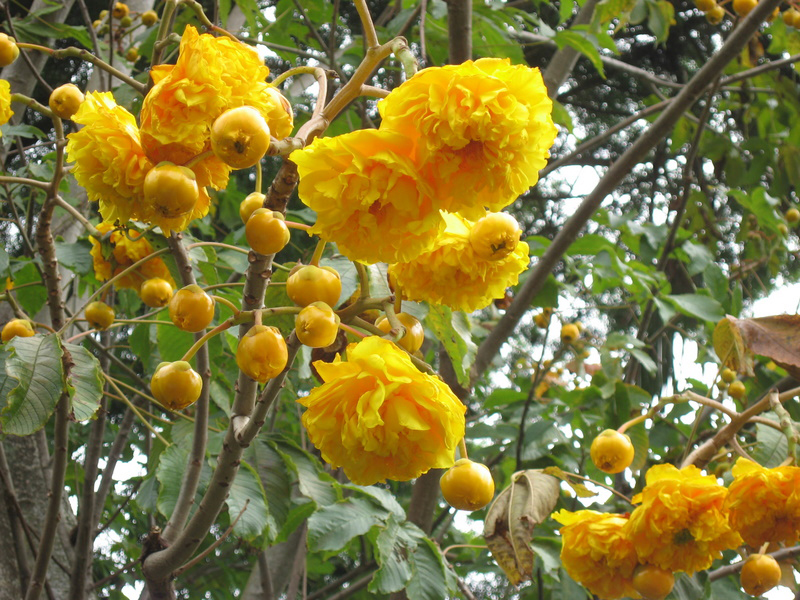 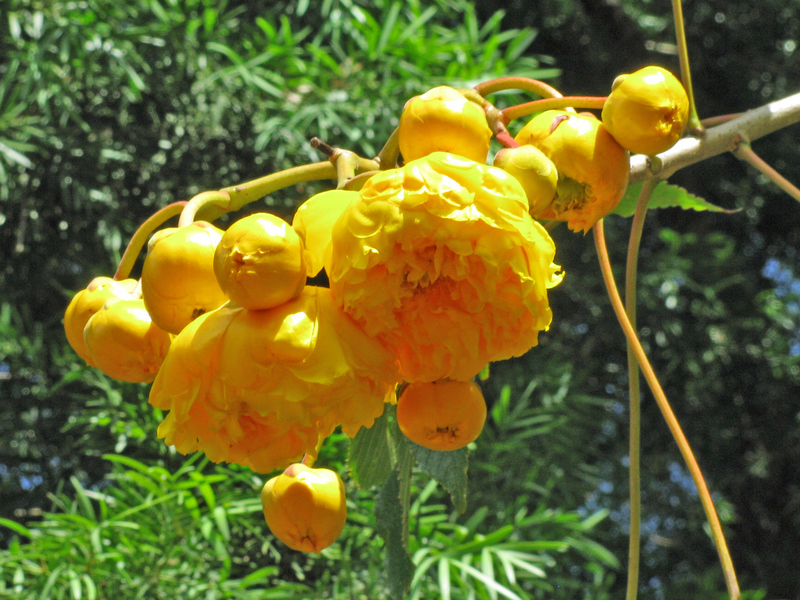 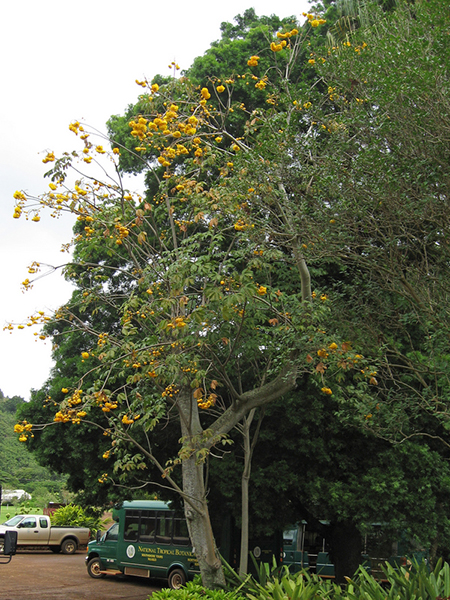 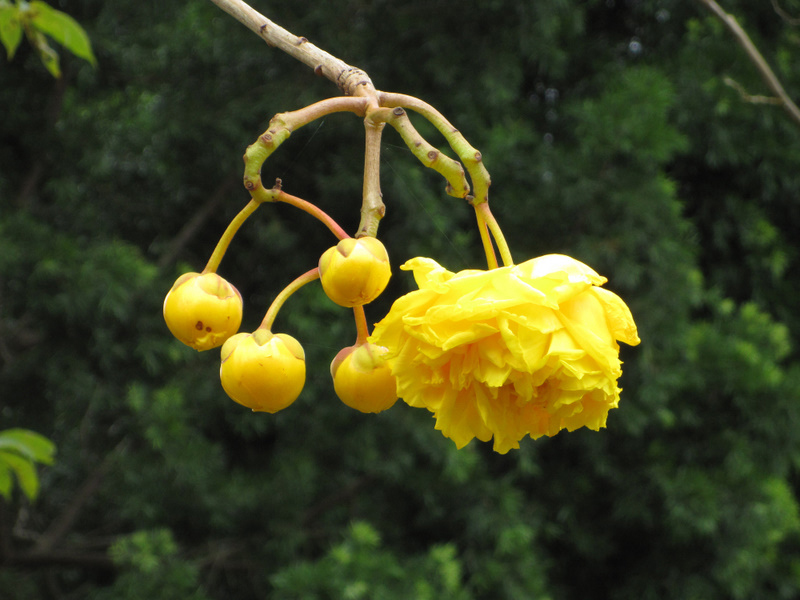 Often a small tree Buttercup Tree is found growing in disturbed areas, trunks may only be twenty or so centimeters in diameter. Still, larger individuals of the mature dry forest may reach girths of 40cm or more. These latter specimens sport sinuous, shallowly fissured, glossy-gray bark, often tinted with a hint of reddish or maroon. The tree's scarce branches end in thick, stubby twigs and the crown they generate is open and airy. Buttercup Tree's large, alternately-arranged leaves (25-30cm by 15cm) are lobed (there are usually five) and somewhat Maple-shaped. Roughly textured, they often turn reddish before being shed at the start of the dry season (December). The tree remains bare until the rains return in April or May. During this deciduous period, Buttercup Tree generates its hallmark flowers from the terminal ends of branches. Large (10cm), glossy-yellow, and showy, these blossoms are an eye-catching and cheerful sight. Each consists of five large petals, a similar number of cupped, brownish sepals, and a central bunch of long, yellow-tipped stamens. Flowering continues from December through February. During this period, fruits begin developing as bulbous, brown structures (7cm). Around March, they begin to open, flower-fashion, revealing a mass of white cotton in their interiors. Consisting of five, stiff, translucent, plastic-like "petals" interspersed with an equal number of opaque, brown ones, the fruits use their cottony contents to conceal and disperse many small (0.5cm), curled, hard, brown seeds. Rather unusually, when the rains resume, and new growth occurs, it comes from sub-terminal positions located below the now-dead branch tips where flowering and fruiting took place.

Silk Cottontree has potential value as an ornamental species, due to its manageable stature and showy blossoms. The wood - yellow when freshly cut - is light and not used, however the bark fibers have been used for twine. (Information for this species compiled and recorded by Camelia Cirnaru, NTBG Consultant.)

Silk Cottontree ranges from Mexico to Northern South America. However, it has been planted in gardens all over the tropics. In Costa Rica, it can be found all along the Pacific slope, but is particularly abundant in the dry northwestern zone.

Silk Cottontree flowers are pollinated by the many bees that frequent them during the day. Its seeds are wind dispersed, with the tree taking advantage of the last stiff breezes of the late dry season. Silk Cottontree is an aggressive, pioneer species that takes hold quickly in disturbed habitats with lots of insolation. It grows quickly and is already producing flowers by its second year. Still, this tree can grow large in its native, dry-forest ecosystem, where it often reaches the canopy layer of vegetation.

We currently have 2 herbarium specimens for Cochlospermum vitifolium in our collection. Click on any specimen below to view the herbarium sheet data.