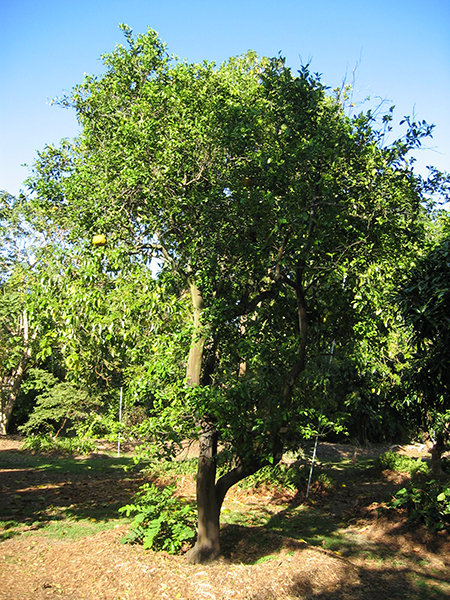 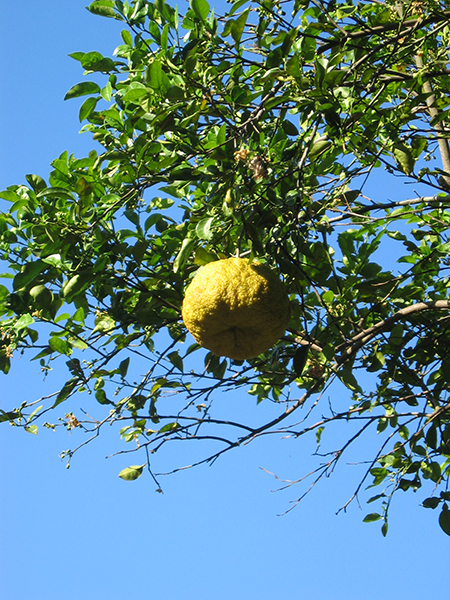 Lemon juice is widely known as a diuretic, antiscorbutic, astringent, and febrifuge. In Italy, the sweetened juice is given to relieve gingivitis, stomatitis, and inflammation of the tongue. Lemon juice in hot water is widely known as a daily laxative and preventive of the common cold. Concentrated lemon juice or lemon juice and honey, or lemon juice with salt or ginger, is one of the best cold remedies. It was the juice of the Mediterranean sweet lemon, not the lime, that was carried aboard British sailing ships of the 18th Century to prevent scurvy, though the sailors became known as "limeys".
Oil expressed from lemon seeds is employed medicinally. The root decoction is taken as a treatment for fever in Cuba and for gonorrhea in West Africa. An infusion of the bark or of the peel of the fruit is given to relieve colic.
(Morton, J. 1987. Fruits of warm climates.)

The thorns of the lemon tree inflict painful punctures and scratches. Lemon peel oil may cause contact dermatitis, chronic in those who handle, cut and squeeze lemons daily. Parts of the body touched by contaminated hands may show severe reactions after exposure to the sun. People that suck lemons may suffer irritation and eruptions around the mouth. The wood of lemon trees and its saw-dust may induce skin reactions in sensitive woodworkers.
(Morton, J. 1987. Fruits of warm climates.)

Lemon juice is valued in the home as a stain remover, and a slice of lemon dipped in salt can be used to clean copper-bottomed cooking pots. Lemon juice has been used for bleaching freckles and is incorporated into some facial cleansing creams.
Lemon peel oil is much used in furniture polishes, detergents, soaps and shampoos. It is important in perfume blending and especially in colognes.
Petitgrain oil (up to 50% citral), is distilled from the leaves, twigs and immature fruits of the lemon tree in West Africa, North Africa and Italy. With terpenes removed, it is greatly prized in colognes and floral perfumes.
Lemon peel, dehydrated, is marketed as cattle feed.
Lemonade, when applied to potted plants, has been found to keep their flowers fresh longer than normal. But it cannot be used on chrysanthemums without turning their leaves brown.
The wood of lemon trees is fine-grained, compact, and easy to work. In Mexico, it is carved into chessmen, toys, small spoons, and other articles.
(Morton, J. 1987. Fruits of warm climates.)

The true home of the lemon and rough lemon is unknown, though some have linked it to northwestern India.
Rough Lemons are used just like the common lemon. Slices of Rough Lemon are served as a garnish on fish or meat or with iced or hot tea, to be squeezed for the flavorful juice. In Colombia, lemon soup is made by adding slices of lemon to dry bread roll that has been sauted in shortening until soft and then sieved. Sugar and a cup of wine are added and the mixture brought to a boil, and then served.
Lemon juice, fresh, canned, concentrated and frozen, or dehydrated and powdered, is primarily used for lemonade, in carbonated beverages, or other drinks. It is also used for making pies and tarts, as a flavoring for cakes, cookies, cake icings, puddings, sherbet, confectionery, preserves and pharmaceutical products. A few drops of lemon juice, added to cream before whipping, gives stability to the whipped cream.
Lemon peel can be candied at home and is preserved in brine and supplied to manufacturers of confectionery and baked goods. It is the source of lemon oil, pectin and citric acid. Lemon oil, often with terpenes and sesquiterpenes removed, is added to frozen or otherwise processed lemon juice to enrich the flavor. It is much employed as a flavoring for hard candies.
(Morton, J. 1987. Fruits of warm climates.)

The true home of the lemon and rough lemon is unknown, though some have linked it to northwestern India. It is supposed to have been introduced into southern Italy in 200 A.D. and to have been cultivated in Iraq and Egypt by 700 A.D. It reached Sicily before 1000 and China between 760 and 1297 A.D. Arabs distributed it widely in the Mediterranean region between 1000 and 1150 A.D. It was prized for its medicinal virtues in the palace of the Sultan of Egypt and Syria in the period 1174-1193 A.D. Christopher Columbus carried lemon seeds to Hispaniola in 1493. The Spaniards may have included lemons among the fruits they introduced to St. Augustine. They were grown in California in the years 1751-1768. Lemons were reported to be increasingly planted in northeastern Florida in 1839.
(Morton, J. 1987. Fruits of warm climates.)