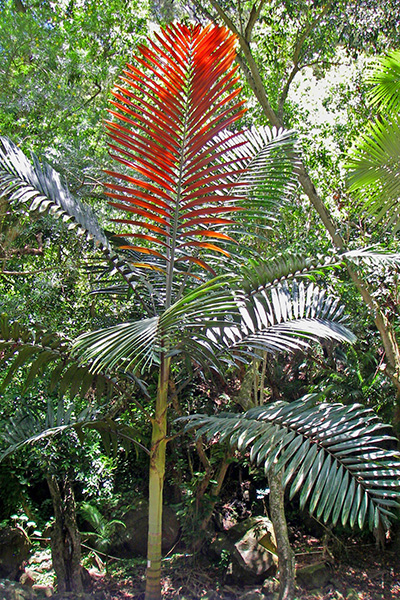 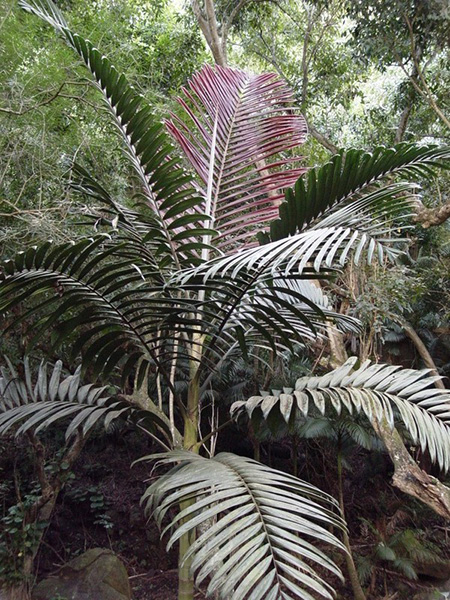 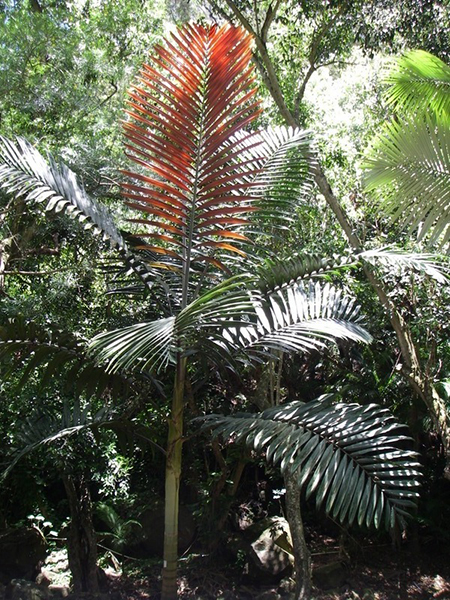 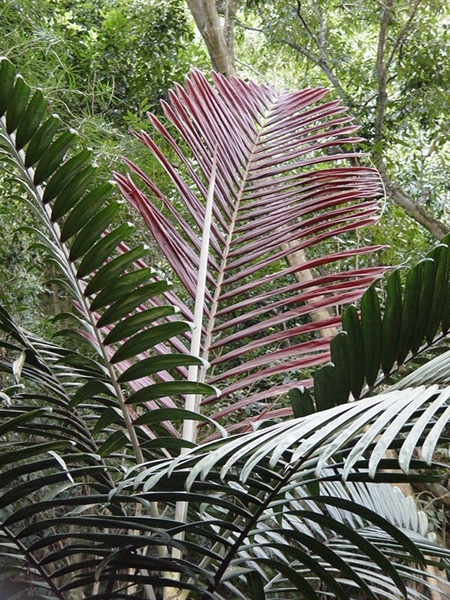 Chambeyronia macrocarpa grows to 15 m tall and is found in the understory of rainforest. The solitary stem has rings at regular intervals along it, which are the scars left where leaves were attached that have now fallen. This species gets its common name from the bright red new leaves that can remain red in color for up to 10 days. The leaves are spirally arranged on the stem and are pinnately compound meaning that the leaf is divided into many leaflets that are arranged along the length of the midvein or rachis of the leaf. The leaves are up to 4 m long and have a stalk that can be up to 45 cm long. Each leaf is made up to 37-40 leaflets that can be up to 1.5 m long and 7.3 cm wide. The branched inflorescence is produced at the base of the crownshaft and can be up to 50 cm long. This palm species is monoecious meaning that separate staminate (pollen producing) and pistillate (ovule producing) flowers are produced and are often arranged in groups of three containing two staminate and one pistillate flowers. The staminate flowers mature first and after the pollen has been shed the female flowers mature. Staminate flowers are cream-pink in color, contain 40-48 stamens, and are fragrant. Pistillate flowers are white and contain an undivided ovary with a single ovule. The crimson fruit is more or less round in shape and is 4.6 cm long.


Another New Caledonian palm species, Chambeyronia lepidota, is included on the IUCN Red List of Threatened Species. However, this species is considered to be at a “Low Risk” for extinction but “conservation dependent” meaning that the ongoing survival of the species is dependent on the ongoing efforts to maintain the habitat and known populations of the species. It is considered that if these programs were discontinued the persistence of this species would be threatened.

We currently have 3 herbarium specimens for Chambeyronia macrocarpa in our collection. Click on any specimen below to view the herbarium sheet data.