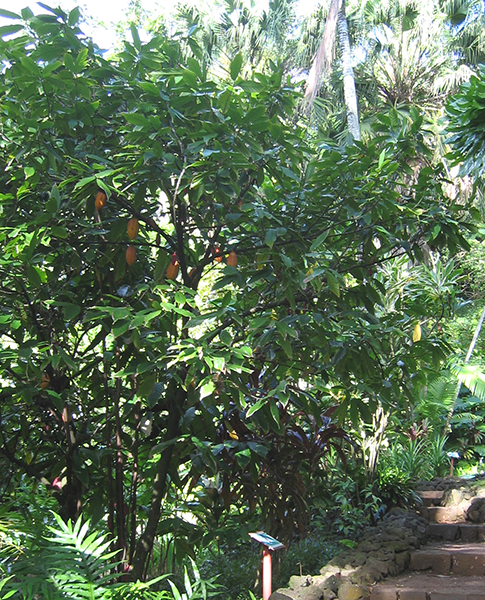 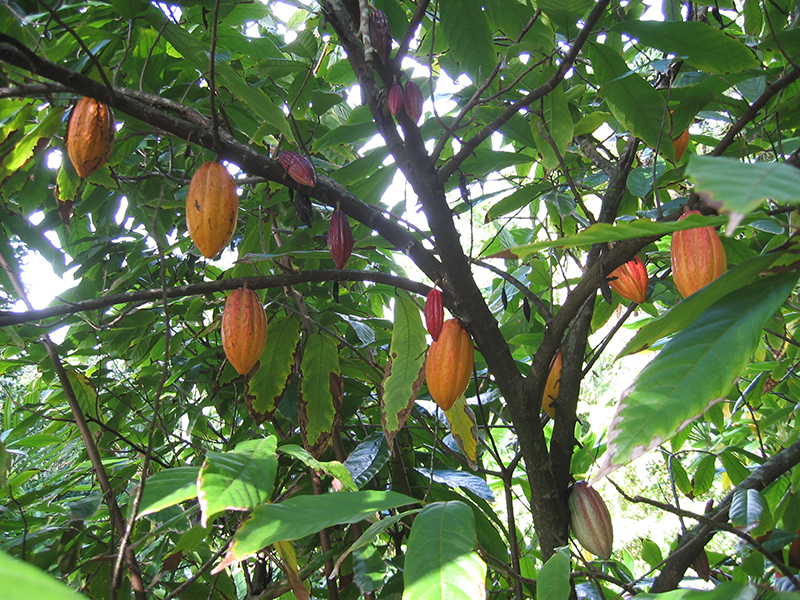 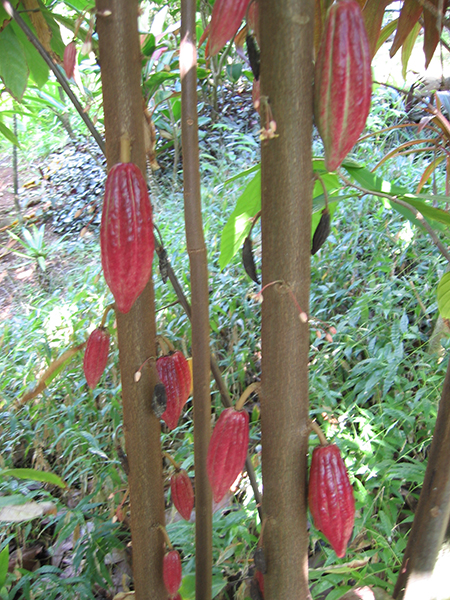 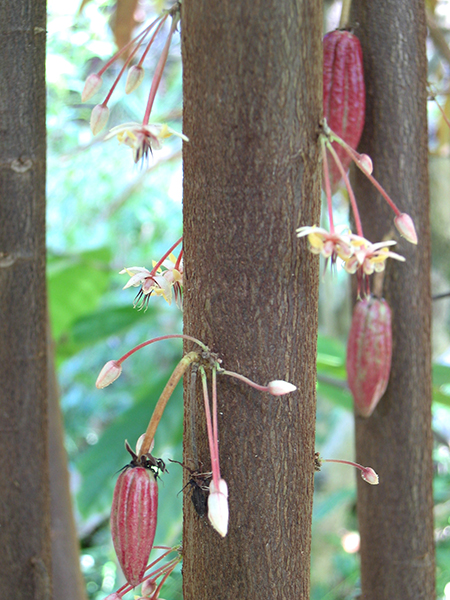 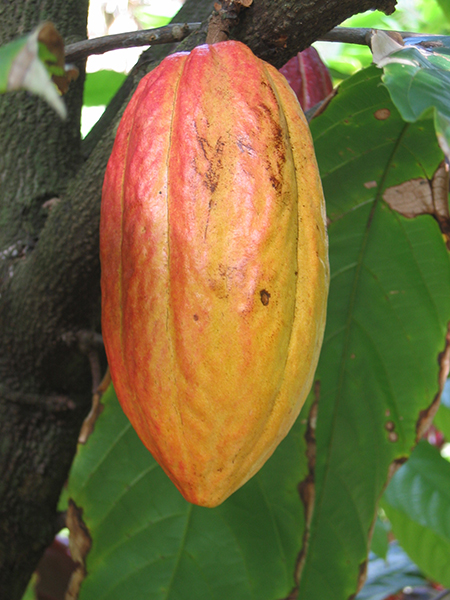 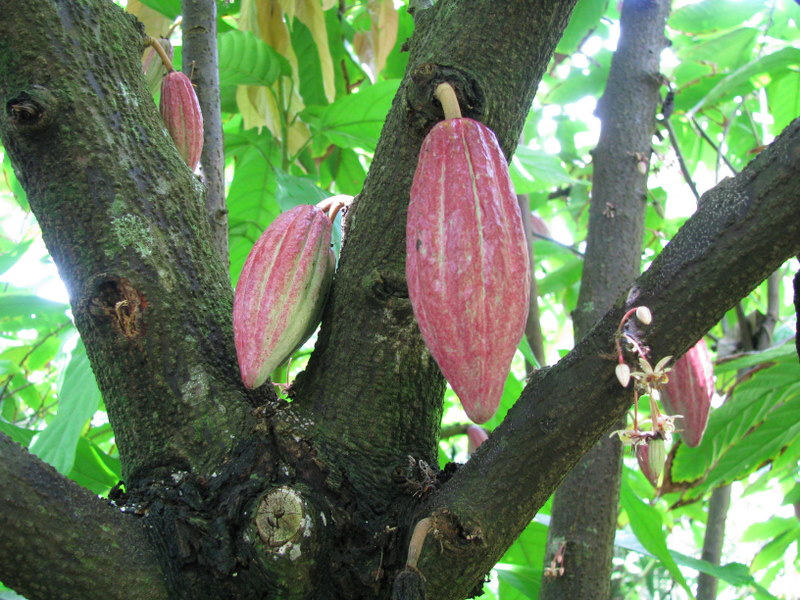 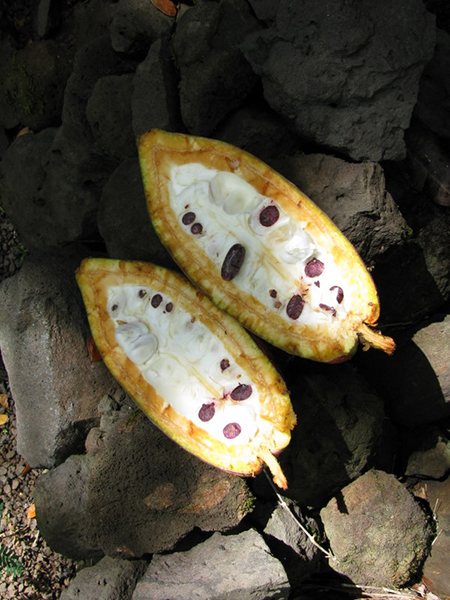 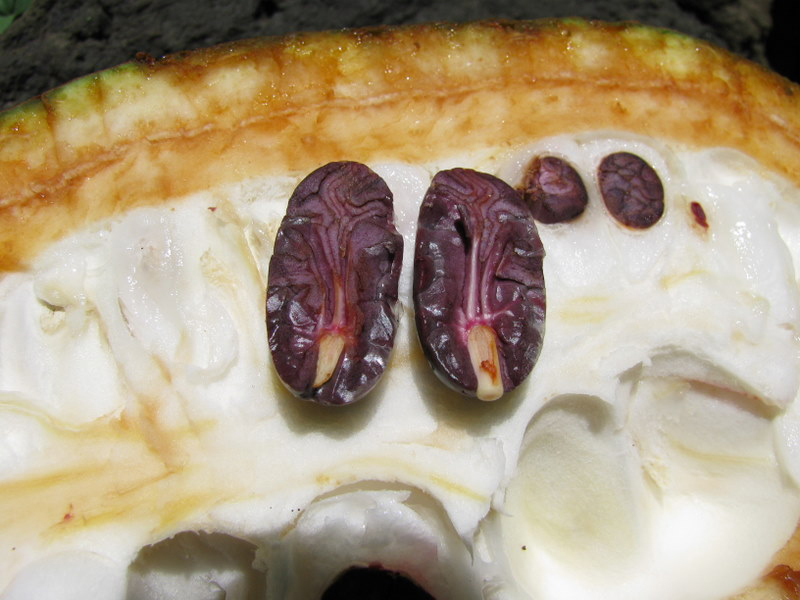 Cacao is a handsome evergreen tree about 12-15 feet high and branching at the top. The bark is smooth and brownish and the wood is light and white. The leaves are dark green, petiolate, lanceolate shaped and smooth on both sides. The flowers are very small, clustered , white with a reddish tint and scentless. The tree bears its leaves, flowers and fruits all year round but the usual season for gathering the fruits is June and December. The fruits grow right out of the trunk and branches of the tree and ripen into long, orange pods. The opened pod reveals several rows of seeds, also called cocoa "beans". There are approximately 40 seeds in each pod and each of them is coated with a sweet, juicy, delicious pulp. Fresh seeds are white and the inside of them is rich brown, with the taste of unsweetened cocoa powder. The best cacao seeds are large, full and heavy, smooth, with a light chestnut-brown color, dry, not musty, with an agreeable odor and a mild bitter, fatty taste. When the kernels are separated from the shell, they should be shining violet-brown. (Klein, R. M. The Green World, An Introduction to Plants and People.) (Schultes, R. E. and Raffauf, R. F. The Healing Forest.) (Forsyth, A. How Monkeys Make Chocolate.)

Butter of Cacao is extracted by expression, decoction or the action of a solvent. The Oil of Theobroma or Cacao butter is solid, yellowish-white, and highly nutritious with a bland chocolate taste like. It is used as a substitute for cod-liver oil or as diet during the last days of pregnancy. It is also an ingredient in pharmacy for coating pills and preparing suppositories. It has excellent emollient properties and is used in cosmetic ointments, to soften and protect chopped hands and lips and in preparation of fancy soaps, various cosmetics and pomatums. Theobromine, the alkaloid contained in the beans, resembles caffeine in its action, but its effect on the central nervous system is less powerful. Its action on muscle, the kidneys and the heart is more pronounced. It is used principally for its diuretic effect due to stimulation of the renal ephitelium. It is useful when there is an accumulation of fluid in the body resulting from cardiac failure, in which case is given with digitalis to relieve dilatation. It is also administered in powders or cachets in high blood pressure because it dilates the blood vessels. In many countries of the world Cacao is used for its medicinal values, because of its antiseptic, diuretic, parasiticide, vulnerary and emmenagogueue properties. For examples in Dominic Republic Cacao is used as diuretic and for kidney affections. In Ghana, for cough and as dentrifice In Haiti, Cacao treats burns, dry lips and rheumatism. In Mexico, the snake bites and wounds are treated with Cacao. In Venezuela, Cacao is used for alopecia and in Panama as antiseptic and parasiticide. The medicinal use of infusion of the leaves as a heart tonic is widespread in Colombia. Indigenous people from Tropical America use the toasted seeds boiled with water to relieve a condition of the scalp, like eczema. A decoct made from the bark of the tree is used as weakly wash for a local cutaneous disease. There are many chemicals contained in the seeds, leaves, flowers and petioles of the Cacao tree such as alanine, alkaloids, amyl-alcohol, amylase, arabinose, arachidic-acid, ash, aspariginase, biotin, campesterol, carbohydrates, catalase, catechins, catechol, cellulose, chloride, cholesterol, copper, cyanidin, decarboxylase, dextrinase, ergosterol, fat, fiber, formic-acid, fructose, furfurol, glucose, glutamic-acid, glycerin, glycine, iron, isoleucine, kilocalories, lactic-acid, leucine, linalool, lipase, lysine, maleic-acid, mannose, nicotinic-acid, oleic-acid, oxalic-acid, palmitic-acid, peroxidase, protein, purine, riboflavin, stearic acid, sucrose, tannins, tartaric-acid, valeric-acid, vanillic-acid, vitexin, water, xylose. (Klein, R. M. The Green World, An Introduction to Plants and People.) (Schultes, R. E. and Raffauf, R. F. The Healing Forest.) (Forsyth, A. How Monkeys Make Chocolate.)

Native to lowlands of South America the Cacao trees grow wild, scattered in the tropical rainforest. In the early seventeenth century the trees were introduced to Africa by the Portuguese. (Klein, R. M. The Green World, An Introduction to Plants and People.) (Schultes, R. E. and Raffauf, R. F. The Healing Forest.) (Forsyth, A. How Monkeys Make Chocolate.)

The seeds ("beans") of cacao contain fatty matter (40-50%), theobromine, small quantities of caffeine, tannins, polyphenols, nitrogen and fiber. Cacao seeds are prepared for commerce by drying in the sun in which case they retain their bitterness and astringency or they are cured by a sweating process in which case their bitter and astringent properties are modified and the color of the seeds changed. In the process of drying the seeds develop the color, odor and flavor associated with chocolate. Chocolate is probably the most delicious flavor that humans have discovered. It is made from dried and roasted seeds of Cacao grounded into a powder and than boiled with milk or/and water and various other spices. Chocolate is a very nutritious and delicious article of diet for invalids and convalescing persons and for healthy people too. However Chocolate has some downsides: a single ounce of chocolate contains approximately 150 calories and 9-10 grams of fat and 65% of the calories from chocolate comes from fat. (Klein, R. M. The Green World, An Introduction to Plants and People.) (Schultes, R. E. and Raffauf, R. F. The Healing Forest.) (Forsyth, A. How Monkeys Make Chocolate.)

Legend says that in the time of the Aztec Empire as a part of the ceremony of coronation and religious rituals, the priests and nobility would sip reverently a liquid made from a plant that had been offered as gift to humanity from the God of the Air, Quetzalccoatl. The drink, Chocolate, was invested with sacred powers because it was believed that only through partaking of this beverage the humans would acquire the ability to communicate with their God. Cortez, the Spanish conquistador reached Mexico in the early sixteen century, at the time of the coronation of Montezuma II and he was giving to taste a very bitter, very hot liquid made of dried, coarsely ground beans of the sacred Chocolate tree, mixed with unknown spices in hot water. Through Cortez, the Europeans learn the delicious secret contained in the fruits of the Cacao tree. Westerners first saw the pod shaped fruits of the Chocolate tree, the Cacahual, when Columbus was given several fruits on his first voyage to the New World. He offered them as gifts to Ferdinand and Isabella of Spain, but at that time no one had any idea what they can be used for, so the Cacao nuts got lost on the Spanish court. Cacao was named Theobroma by Linnaeus, the word meaning "food of the Gods". (Klein, R. M. The Green World, An Introduction to Plants and People.) (Schultes, R. E. and Raffauf, R. F. The Healing Forest.) (Forsyth, A. How Monkeys Make Chocolate.)

The trees are cultivated in large estates in the shade of the Banana trees or other large plants, in Mexico, West Indies, South America, and Africa. Countries that produce Cacao are Ghana, the Ivory Coast, Brazil, Ecuador, Venezuela, and Nigeria. Cacao trees grow best in regions of high humidity with stable temperature, areas found only in the tropical zones within 20 degrees north or south of the Ecuador. There are three types of Cacao trees: 1. The "Criollo type" produces the best chocolate and is grown in South America. 2. The "Forastero type" is the main type grown in Africa. 3. The "Trinatario type", a hybrid between the other two types, is widely grown because of the vigor of the tree. (Klein, R. M. The Green World, An Introduction to Plants and People.) (Schultes, R. E. and Raffauf, R. F. The Healing Forest.) (Forsyth, A. How Monkeys Make Chocolate.)

We currently have 4 herbarium specimens for Theobroma cacao in our collection. Click on any specimen below to view the herbarium sheet data.