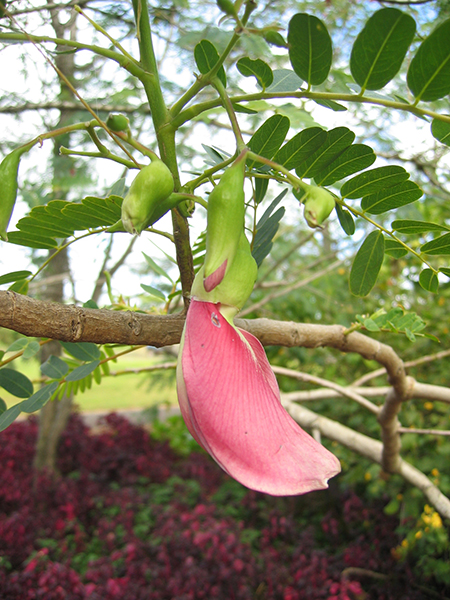 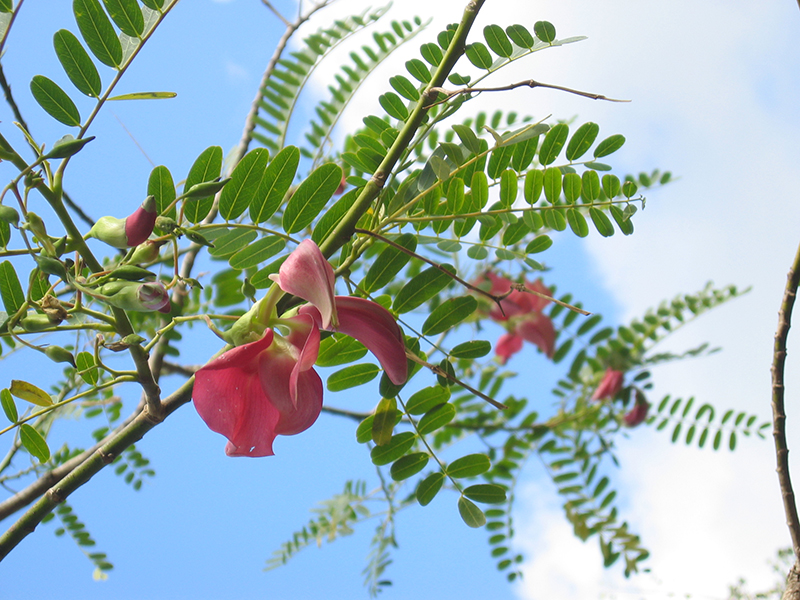 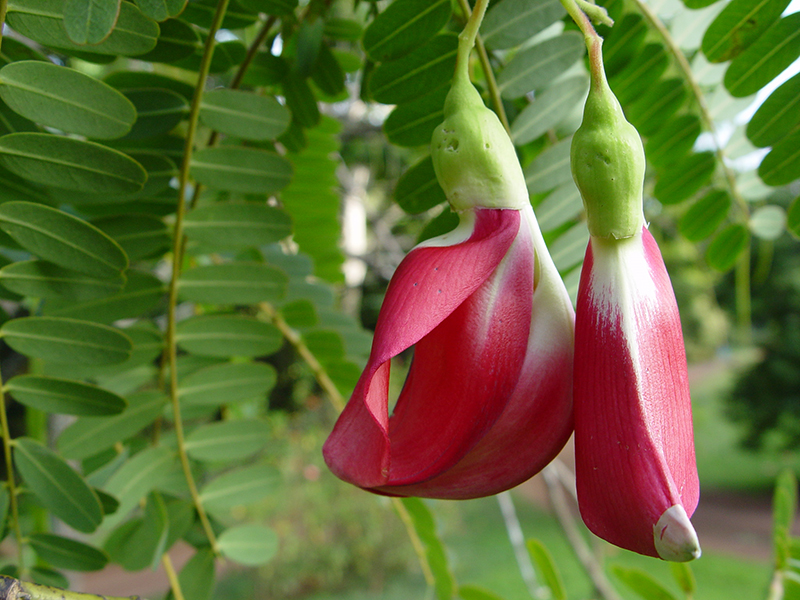 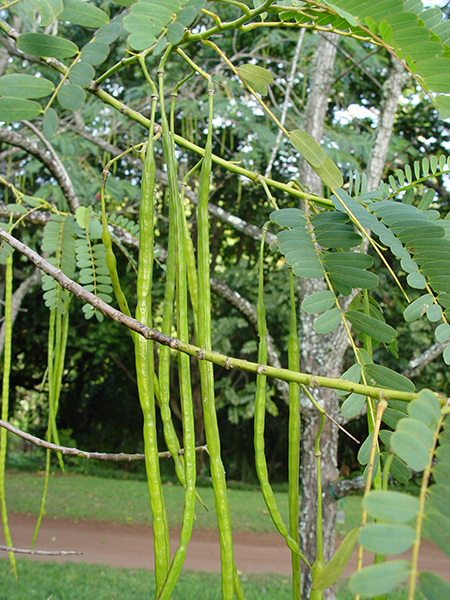 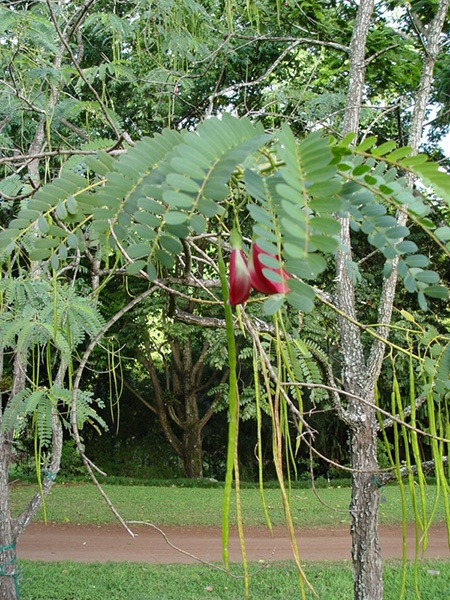 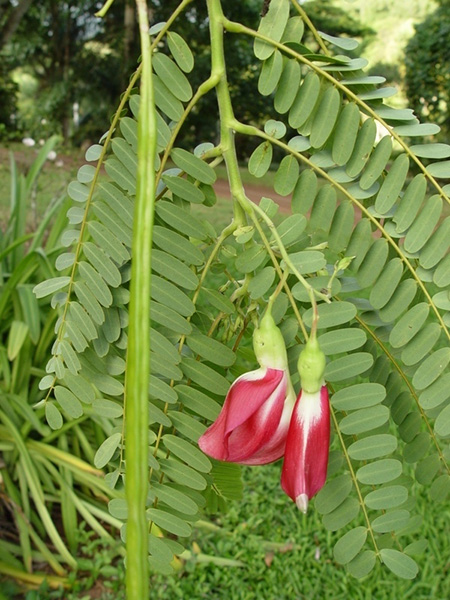 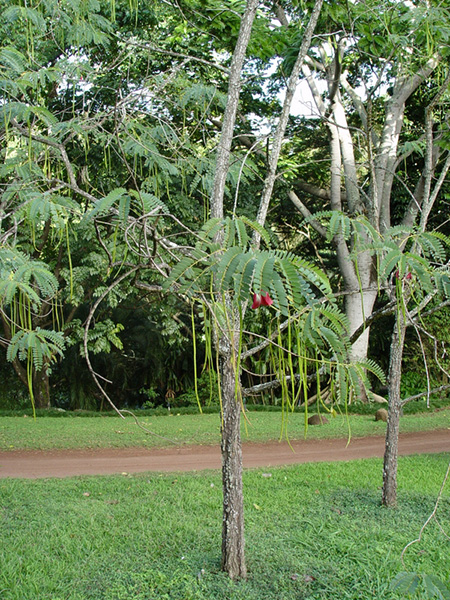 Sesbania grandiflora is a small erect, fast-growing, and sparsely branched tree that reaches 10 m in height. The bark of this species is light gray, corky and deeply furrowed and the wood is soft and white. All Sesbania species have pinnately compound leaves where each leaf is divided into multiple leaflets. Agati leaves can be up to 30 cm long with 5-15 paired leaflets that are oblong to elliptic in shape and about 3 cm in length. The flowers of Sesbania grandiflora are large (7–9 cm long) and are borne on an unbranched, pendulous inflorescence. Two varieties of Sesbania grandiflora are recognized including variety grandiflora which has white flowers and variety coccinea which has rose pink or red flowers. The flowers are similar in shape and arrangement to Pea flowers with five petals that are differentiated into a standard, wing, and keel petals. The standard petal is usually upright, the wing petals spread out on either side of the flower, and the keel is boat-shaped and in this species is curved down and away from the flower. The fruit is a thin pod which can be up to 60 cm long and contains from 15-50 seeds.

All parts of Sesbania grandiflora are utilized for medicine in Southeastern Asia and India including preparations derived from the roots, bark, gum, leaves, flowers, and fruit.
In a number of cultures the root is applied as a poultice for application to inflammation and fever. Powdered roots of Sesbania grandiflora var. coccinea are mixed in water and applied externally as a poultice or rub to rheumatic swellings. The bark is considered astringent and is utilized for the treatment of smallpox, in the Philippines for the treatment of ulcers in the mouth and alimentary canal, in Java, for the treatment of thrush and infantile disorders of the stomach, and in Cambodia the pounded bark is applied to scabies. The juice of the leaves is considered anthelmintic and tonic and is used to treat worms, biliousness, fever, gout, and itchiness, and leprosy. Malayans apply crushed leaves to sprains and bruises. In Ayurvedic medicine the leaves are utilized for the treatment of epileptic fits and clinical research supports the anticonvulsive activity of Agati leaves.

Agati can be grown from seed or from cuttings for cultivation. It typically produces a soft wood, however, the density of the wood increases with age and the timber from 5-8 year old trees is used in house construction or as craft wood. Sesbania grandiflora is ability to tolerate waterlogging, alkaline, and saline soils and is therefore ideally suited to environments that are seasonally waterlogged or flooded.
Agati is extensively grown for fuel wood and fodder in Southeast Asia and Indonesia as it is a very fast-growing plant that resprouts vigorously following harvesting. The wood is typically harvested on a 2 or 5-year rotation and annual growth rates of 4.3–5.5 (-8.3) m have been documented in Australia. The shoots and foliage are utilized for livestock fodder and the stems for fodder are cut before reaching 1m in height. In Java, the tree is extensively used as a pulp source and the inner bark is utilized as a source of fiber. The tree is used as a nurse or shade tree for Black pepper cultivation (Piper nigrum; Piperaceae)). Agati has been used for reforestation projects to stabilize eroded disturbed environments however as it is shallow-rooted it is vulnerable to wind throw.
A gum, called katurai, which is red when fresh and black after drying, is exuded from stem wounds. This gum is applied to fishing cord to make it more durable.

Agati is native to tropical Asia and is widespread in India, Malaysia, Indonesia, and the Philippines where it is found in tropical dry and moist forest from sea level to 800 m. It is commonly found in disturbed and agricultural environments including along roadsides, on dikes between rice paddies, and in backyard vegetable gardens. It has been introduced and has become established in cultivation in Southern Florida, Hawaii, Jamaica, Mauritius, Central America, and South America. Agati is frost-sensitive and requires annual precipitation between 4.8-22.5 dm and annual temperatures of 24.3- 26.7°C.

The flowers, young leaves and tender pods of the white flowered Agati (Sesbania grandiflora var. grandiflora) are edible and are sold in local ethnic markets. They are prepared by blanching in boiling water for less than a minute or may be dipped in batter and fried in butter. The flowers are eaten as vegetables alone or mixed into curries or salads. The red flowers of Sesbania grandiflora var. coccinea are also eaten but are considered bitter and not as widely eaten as the white flowered variety in Hawai`i.

In India, the flowers are sacred to Siva, representing both the male and female sex organs.

We currently have 11 herbarium specimens for Sesbania grandiflora in our collection. Click on any specimen below to view the herbarium sheet data.