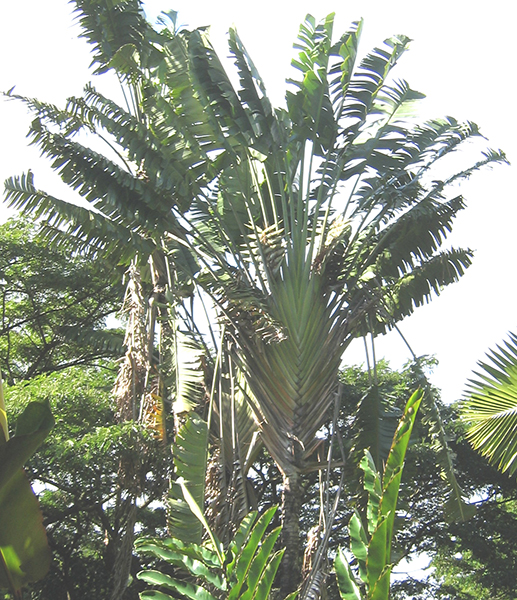 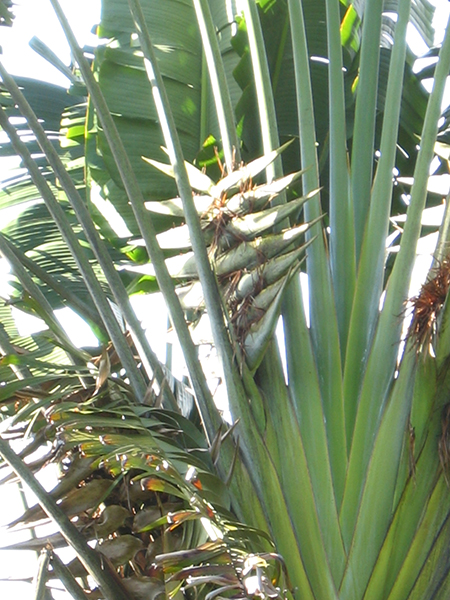 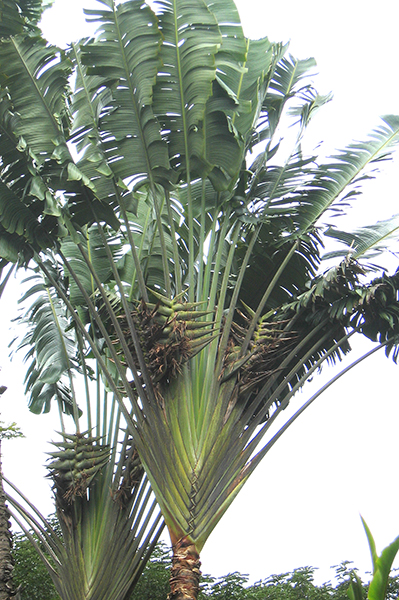 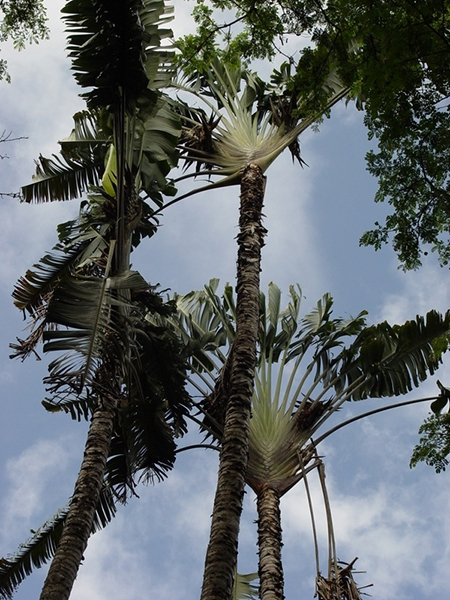 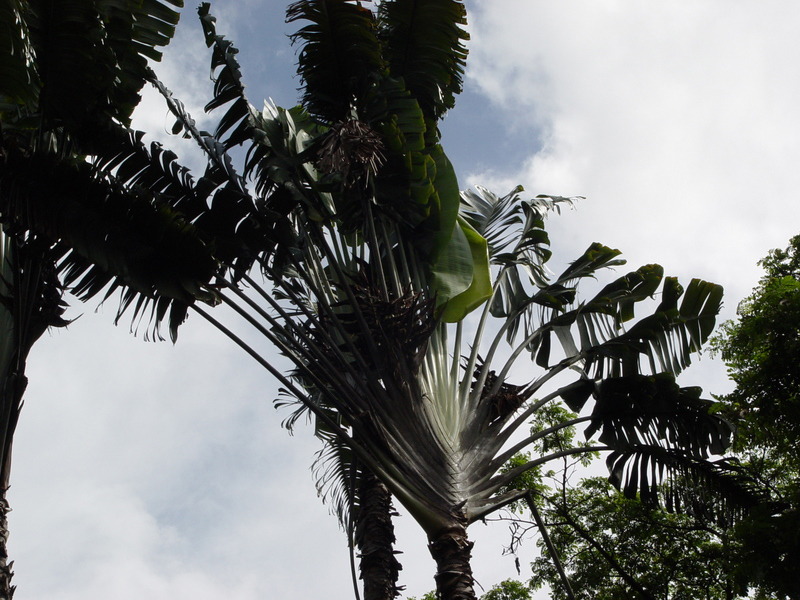 Traveler's Palm is one of nature's most distinctive and remarkable plants. Traveler's Palm (not a true palm) has been described as being part banana tree and part palm tree. Its long and multiple petioles (stems) and deep green leaves resemble those of the banana and extend distinctively out from the trunk like large slats of a hand fan. The leaves range up to 10 feet long and from 12 to 20 inches in width. Young Traveler's Palms have a subterranean trunk which, in the adult plant, emerges above ground to elevate the symmetrical fan assembly to heights ranging from 30 to 60 feet. The green palmlike trunk grows up to one foot in diameter and displays showy trunk rings. Multitudes of small creamy white flowers form an inflorescence up to 12 inches long. A mature Traveler's Palm may bloom year round and produce brown fruits that contain light blue seeds. The Traveler's Palm is typically the main attraction and focus of any tropical landscape in which it appears!
(Smith, A. C. 1979. Flora Vitiensis nova: A new flora of Fiji. NTBG.)

The Traveler's Palm is considered to be one of nature's most spectacular trees and is a supreme accent plant. Plant the Traveler's Palm outdoors in a tropical landscape that is free from frosts and has overhead room to accommodate the large head of leaves. Shelter the Traveler's Palm from strong winds, otherwise the large leaves may become tattered. Traveler's Palm also can be grown indoors and in greenhouses where lighting is plentiful and where the container in which it is growing restricts plant size.
(Floridata Plant Encyclopdia. 2004.)

(Information for this species compiled and recorded by Camelia Cirnaru, NTBG Consultant)
Traveler's Palm is endemic to secondary forests in Madagascar.
Some plants demonstrate the intricate and often delicate balance between plants and animals, and between nature and mankind.
Traveler's Palm, Ravenala madagascarensis is such a species, because it depends on the threatened Black and White Ruffed Lemurs (Varecia variegata variegata) to survive. This lemur is the only known pollinator of this species. Black and white ruffed lemurs live in the eastern rainforests of Madagascar. They eat fruit and other plants. Black and white ruffed lemurs are endangered because people are cutting down their forest homes in order to grow food and also because they like to eat the lemurs. Conservationists in Madagascar are working hard to save the black and white ruffed lemur and its habitat.
(www.thewildones.org)
The Traveler's Palm has very deep roots in folklore and tradition. It is a saying: "If a traveler stands directly in front of a Traveler's Palm and makes a wish in good spirit, that wish will definitely come true."
The Traveler's Palm gets its name from the fact that thirsty travelers may find water that accumulates in many parts of the plant such as leaf folds, flower bracts and inside each of the hollow leaf bases. Each leaf base may hold up to one quart of water! Although not a true palm, the Traveler's Palm is considered one of the most striking and unique trees in nature. Traveler's Palm can be used for special accent in tropical landscape.
The species name, "madagascariensis", denotes its origin in Madagascar.
(Floridata Plant Encyclopdia. 2004.)

The Traveler's Palm is endemic to secondary forests in Madagascar.
Traveler's Palm is unique in nature and is monotypic, meaning it is the only species in its genus.
Ravenala madagascariensis is a big problem in Mauritius, especially on mid-altitude (3-600 m) south and west facing slopes in and around the Black River Gorges National Park. In large areas it almost forms monocultures, with little or no native vegetation left.
(Smith, A. C. 1979. Flora Vitiensis nova: A new flora of Fiji. NTBG.)