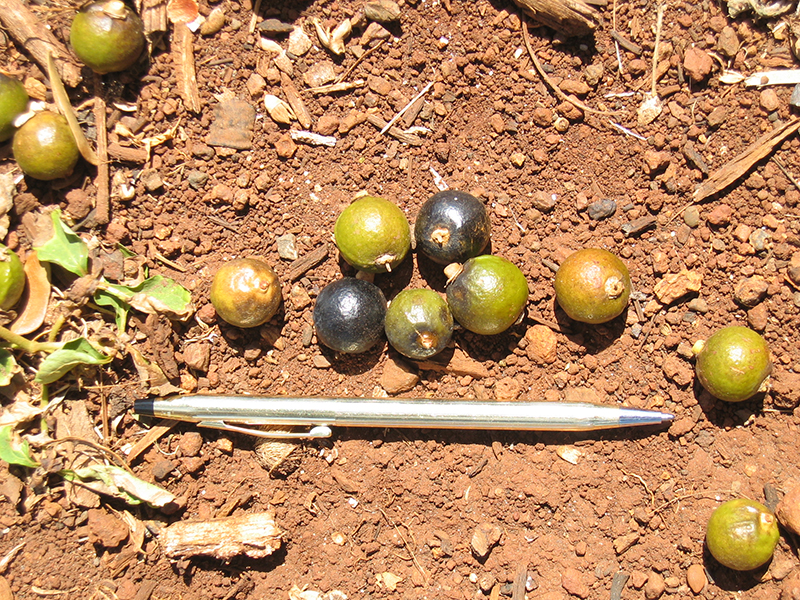 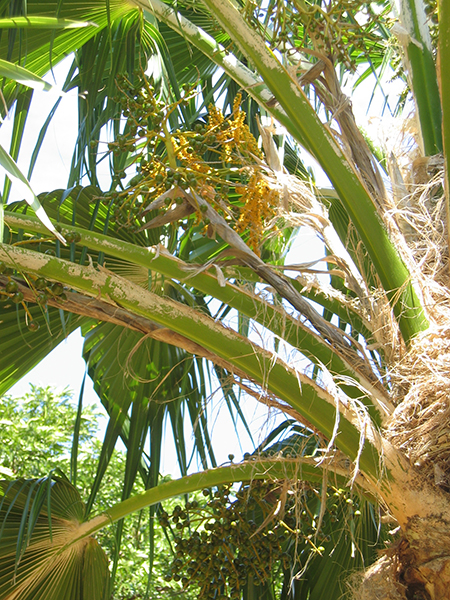 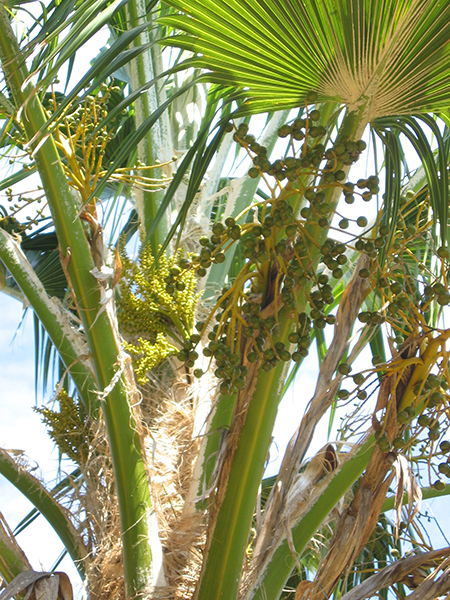 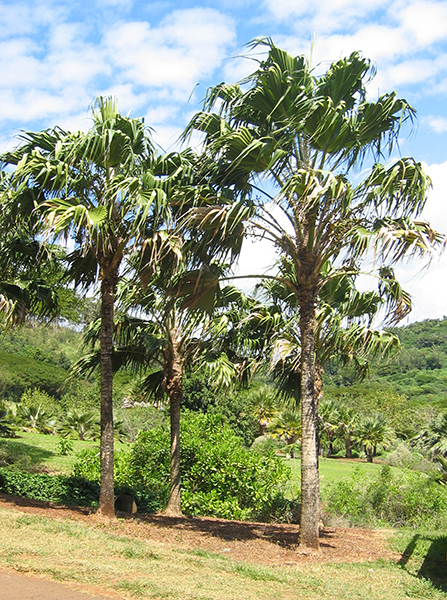 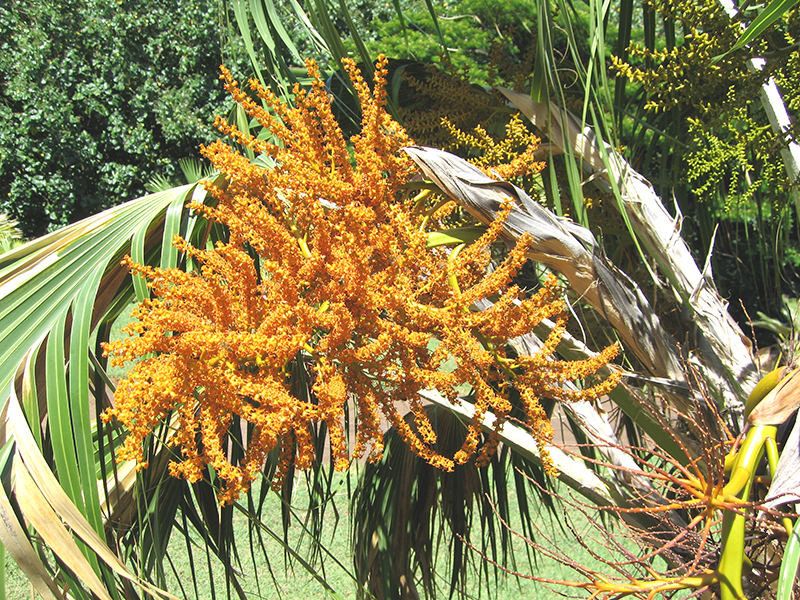 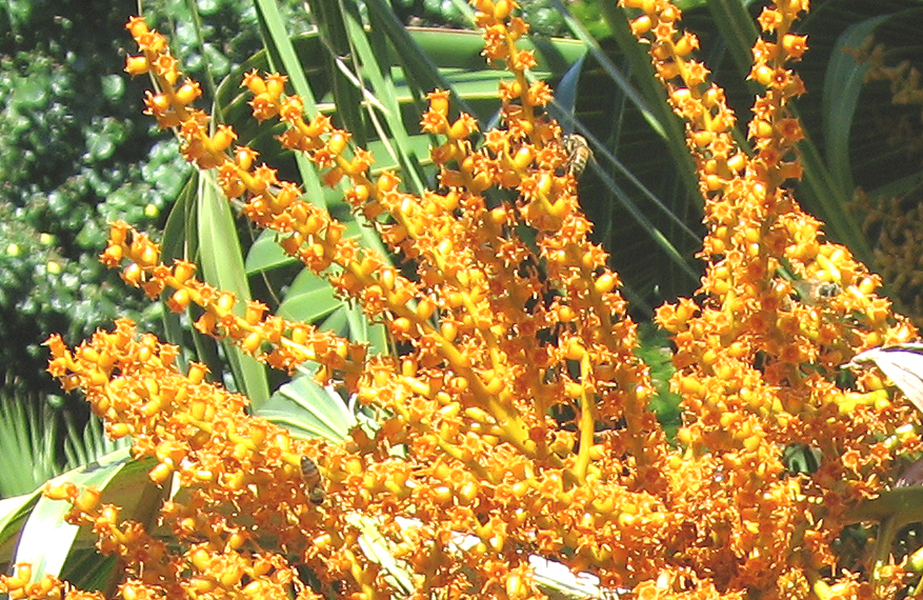 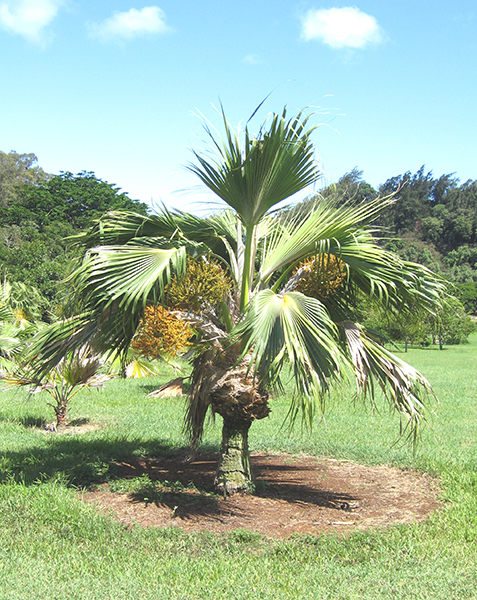 Pritchardia aylmer-robinsonii is a fan-leaved tree about 7 to 15 m (23 to 50 ft) tall with a trunk approximately 20 to 30 centimeters(8 to 12 inches) in diameter. The upper and lower leaf surfaces are green and hairless, and leaf segments are rather thin and drooping. The lower surfaces of the petiole and the leaf ribs are covered with dense, tan wool. The branched, hairless flower clusters are located among the leaves and are no longer than the petioles. Each flower is comprised of a cup-shaped, three-lobed calyx;three petals; six stamens; and a three-lobed stigma. The spherical, hard, black fruit is 1.8 to 2 cm (0.7 to 0.8 in.) in diameter. This species is distinguished from others of the genus by the thin leaf texture and drooping leaf segments; the tan woolly hairs on the underside of the petiole and the leaf blade base; the stout hairless flower clusters that do not extend beyond the fan-shaped leaves; and the smaller spherical fruit.
(Read and Hodel.1990.)

The entire island of Niihau is now classified an Agricultural District, and it is managed as a cattle and sheep ranch. Although approximately 200 immature individuals have been cultivated on Niihau and Kauai, extinction from naturally occurring events and/or reduced reproductive vigor due to the small number of reproductive plants are major threats. Because palms take many years to mature, it is not known whether the immature plants now in cultivation are capable of reproducing and sustaining a viable population. Roof rats are a potential threat to this species since they eat the seeds of some palms of this genus and are found on Niihau.
(Wagner,W.L., D.R. Herbst, and S.H. Sohmer. 1990. Manual of the Flowering Plants of Hawaii.)
(Beccari and Rock. 1921.)
(Cuddihy and Stone.1990.)
(U.S. Fish and Wildlife Service. 1992.Pers.comm.)

Historically, Pritchardia aylmer-robinsonii was found at three sites in the eastern and central portions of the island of Niihau. Trees were found on Kaali Cliff and in Mokouia and Haao Valleys at elevations between 70 and 270 meters(230 and 890 feet).
(Hawaii Heritage Program.1991.)
The most recent observations indicate two plants still remain on Kaali Cliff. Originally a component of the Coastal Dry Forest, this species now occurs only in a rugged and steep area where it receives some protection from grazing animals.
(Read and Hodel.1990.)
In 1947, on one of his botanical collecting trips to Niihau, Harold St. John discovered a new species of the only genus of palms native to the Hawaiian Islands. He named it Pritchardia aylmer-robinsonii in honor of Aylmer F. Robinson, a member of the family that owns the island and a person who provided St. John with much information regarding the island's plants.(St. John, Harold.1959.)


Hawaiian land practices prior to European contact probably destroyed most of the forest on Niihau. Grazing animals were introduced to the island beginning in the 1700s. Cattle, goats, sheep, and pigs have decreased available habitat for Pritchardia aylmer-robinsonii as well as directly damaging trees, seedlings, and/or seeds.
(Wagner,W.L., D.R. Herbst, and S.H. Sohmer. 1990. Manual of the Flowering Plants of Hawaii.)
(Beccari and Rock. 1921.)
(Cuddihy and Stone.1990.)
(U.S. Fish and Wildlife Service,pers.comm.1992. )

We currently have 7 herbarium specimens for Pritchardia remota in our collection. Click on any specimen below to view the herbarium sheet data.