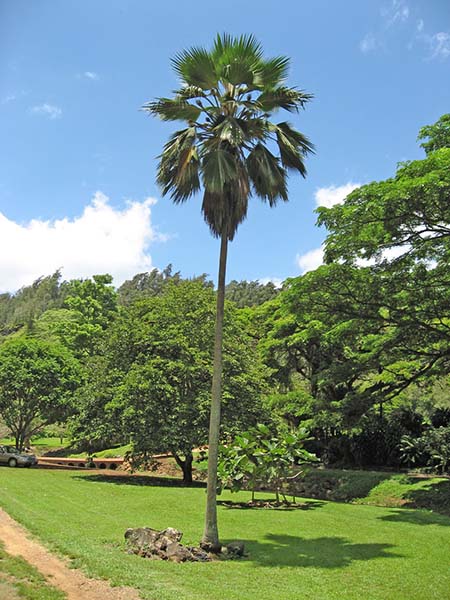 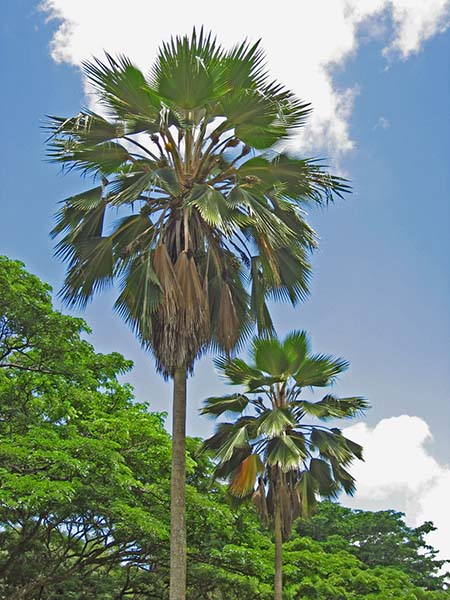 Description:
Pritchardia pacifica, also known by the common name Fiji fan palm, is a tree that grows up to 10 m with a single stem that is up to 30 cm in diameter. Like all Pritchardia species, the leaf blades are fan-shaped, are pleated at the base, and are divided into 73 to 90 distinct sections in the upper half of the leaf. The leaf blades grow up to 1 m long and are held out from the stem by a long leaf stalk. One to four inflorescences (flower clusters) are produced in each leaf axil (between the leaf stalk and the stem) and the inflorescence is shorter than the leaf stalk. The flowers are yellow-green in color, have three sepals and three petals, and are bisexual, meaning they produce both pollen and ovules in a single flower. Each flower is around 7-8 mm long. The dark brown fruit is round, grows to 12 mm in diameter, and contains a single seed.

In Fiji the leaves of Fiji fan palm were traditionally used as fans, known as Iri masei or Ai viu, that were only used by the chiefs. A light, flexible wood was used to construct a border for the leaves that grow up to 90 cm in width. In Fijian the term Ai viu refers to both a fan and an umbrella as the leaves of Fiji fan palm were used for protection from both the sun and the rain. The leaf was held immediately above the head when it was raining in order and the rain rolled off the leaf behind the head. The trunk of this species was occasionally used for ridge-beams. This species was associated with the upper classes and only one or two trees were usually found in a village, as these plants provided enough leaves to meet the material needs of the village chiefs.

(Seemann, B. 1977. Flora Vitiensis (Reprint of 1865-1873 publication). J. Cramer, Germany.)
Geographic Distribution:
Pritchardia pacifica is native to Tonga. It is also found on Fiji, Samoa, and the Marquesas however these populations are likely to be human introductions. This species is found in tropical dry forests. The genus Pritchardia contains around 26 species throughout the Pacific, including species in Fiji, Samoa Tonga, the Tuamotu Islands, and Hawai‘i. Twenty-three species are endemic species in Hawai‘i meaning this is the only place in the world that they are found.

(Smith, A.C. 1979. Flora Vitiensis Nova. Volume 1. Lawai, Hawaii.)
(Wagner, W. L., Herbst, D. R., and S. H. Sohmer. 1999. Manual of the Flowering Plants of Hawai‘i. Revised Edition. Volume 2. Bishop Museum Special Publication 97. University of Hawai‘i Press, Bishop Museum Press, Honolulu, Hawai‘i.)
(Hodel, D.R. 2007. A Review of the Genus Pritchardia. Palms 51(supplement): S1-S52.)
Fiji fan palm is considered a host for a plant disease called Lethal Yellowing that is found in the Florida, Puerto Rico, and Guam. Lethal Yellowing is a disease that causes Coconut palms to drop their undeveloped and developed fruit, causes new inflorescences to turn black, and the fronds to turn yellow. Lethal Yellowing is thought to be caused by organisms called mycoplasmas that are transmitted by the planthopper, Myndus crudus. As a result of this disease, Louisiana, Texas, and Mississippi restrict the transport of Fiji Fan Palm from regions where Lethal Yellowing has been reported.

The genus name Pritchardia honors W. T. Pritchard who was a diplomat in Fiji during the nineteenth century.

This species is sought after by palm enthusiasts for cultivation and is widely grown as an ornamental plant throughout the Pacific. The fresh seed germinates well in high light environments with moist but well drained soil. The plants tolerate coastal spray.

We currently have 2 herbarium specimens for Pritchardia pacifica in our collection. Click on any specimen below to view the herbarium sheet data.