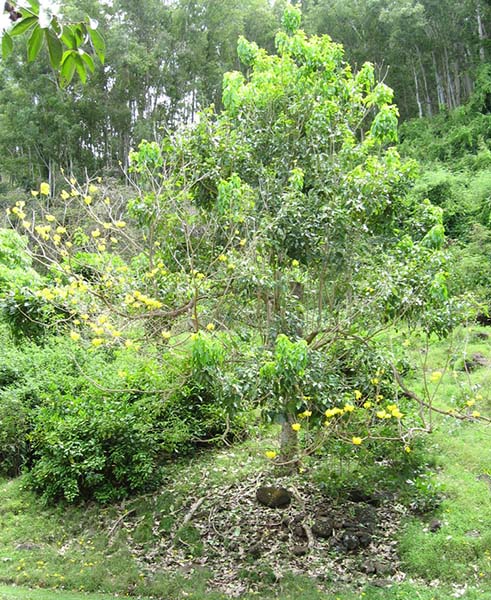 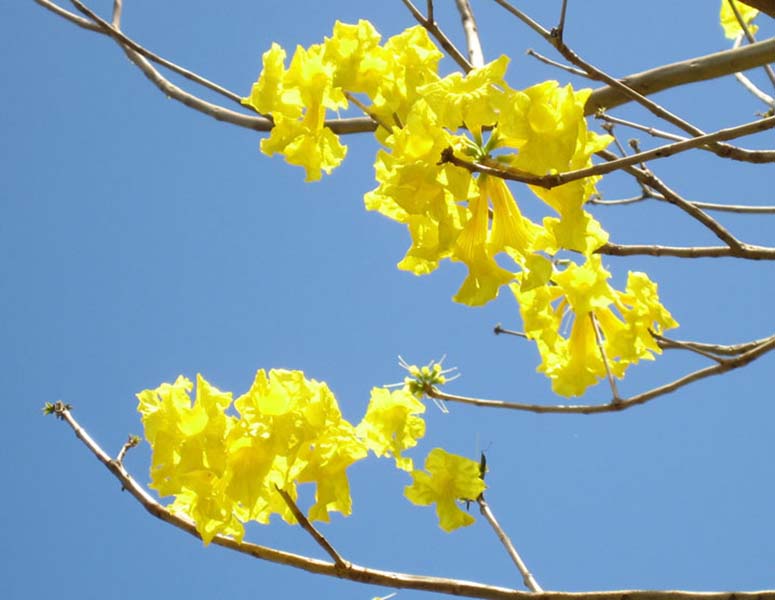 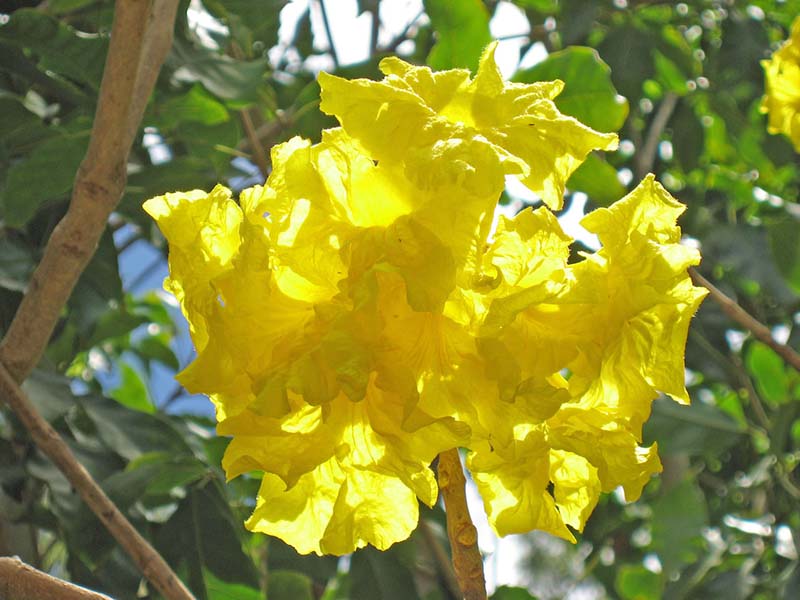 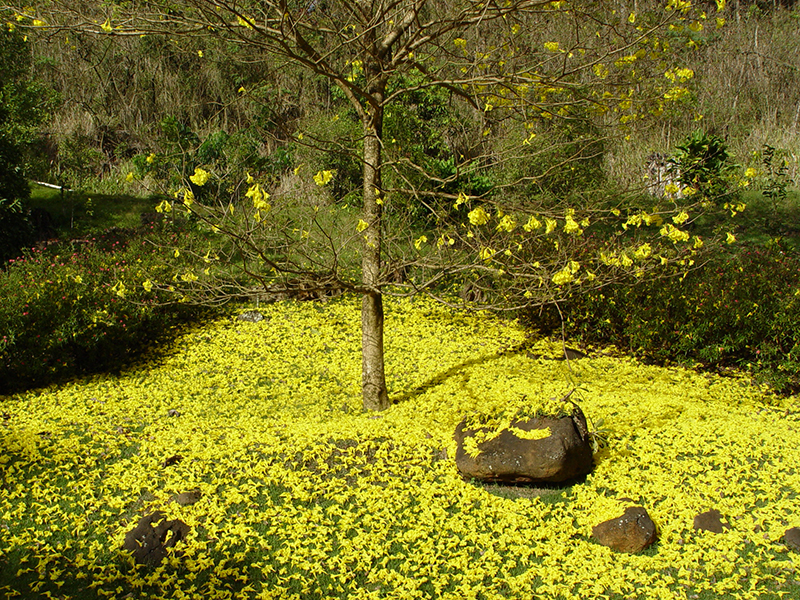 Tabebuia serratifolia, also known by its common name Yellow poui, is a tree that grows up to 37 m in height and has large buttresses at the base of the tree. Buttresses are flared supporting structures found at the base of the tree trunk that provide additional support for tall trees that grow in shallow soil without a deep root system. Yellow poui is deciduous losing its leaves during the dry season with the production of flowers and then new leaves with the onset of the rains. The flowers are borne in clusters at the end of branches, are yellow, and are produced at intervals during the dry season. The petals of all Tabebuia species are fused along most of their length to form a tube-shaped flower dividing into five distinct lobes at the tips of the petals. The filaments on which the anthers (pollen producing structures) are borne are fused to the petals inside the flower. The ovary of Tabebuia serratifolia has contains glands in the upper half of the ovary and the fruit is covered with small warty projections. The fruit of Tabebuia serratifolia is a long, narrow capsule that is divided into two parts each of which contains many winged seeds.

The family Bignoniaceae contains many species with medicinal properties including multiple Tabebuia species that are used as medicines in Central and South America. Tabebuia aurea is used for the treatment of snakebite, Tabebuia rosea and T. ochracea are reported to have antimalarial properties, and T. heptaphylla is reported to effective against syphilis. As a result of the high concentrations of secondary compounds such as lapachol and their chemical properties several Tabebuia species, including T. serratifolia, have been reported to have anti-cancer activity.

The wood of Tabebuia is used extensively in construction due to its durability. The dense heartwood is light to dark brown, is easy to dry despite its density, and is used for house posts, bridge building, and for railway sleepers. The wood is, however, susceptible to damage by from molluscs and crustaceans known as marine-borers that attach to the wood in warm, marine environments and gradually break down the wood. The durability of the wood of members of the Bignoniaceae is a result of the large quantities of secondary compounds in the wood including, the compound lapachol.

(International Center for Research in Agroforestry: Agroforestree (AFT) Database. Accessed on-line on 2 July 2007. www.worldagroforestrycentre.org/sea/Products/ AFDbases/AF/asp/SpeciesInfo.asp?SpID=1587.)
Tabebuia serratifolia is native to tropical Central and South America including Mexico, Bolivia, Venezuala, Colombia, Trinidad and Tobago, Guyana, Suriname, French Guiana, Brazil, and Ecuador. It is found in evergreen lowland forests at elevations from 100-600 m. This species has been introduced into the United States, India, and Kenya. The genus Tabebuia contains around 100 species with a distribution in northern Mexico to northern Argentina.

(Staples, G. W. and D. R. Herbst. 2005. A Tropical Garden Flora: Plants cultivated in the Hawaiian Islands and other tropical places. Bishop Museum Press, Honolulu, Hawai’i.)
Many species of Tabebuia species develop close associations with ant colonies, providing habitat and food for the ants that are thought to provide protection to the plants from herbivory. The plants have twigs that are made of unlignified tissue that is easily hollowed out and some species possess glands that secret sugary substances to attract and maintain the ant colonies. These secretory glands are often concentrated on the young branches and large numbers of ants are found around the secretory glands therefore providing the greatest protection for the plant parts that are most vulnerable to herbivory.

The genus name Tabebuia originated from the Brazilian Tupian Indians words meaning “ant” and “wood”. This name refers to the association of some Tabebuia species with ant colonies, which are thought to provide protection of the plants from herbivory.
Tabebuia serratifolia is designated as the national tree of Brazil.

We currently have 1 herbarium specimens for Handroanthus serratifolius in our collection. Click on any specimen below to view the herbarium sheet data.