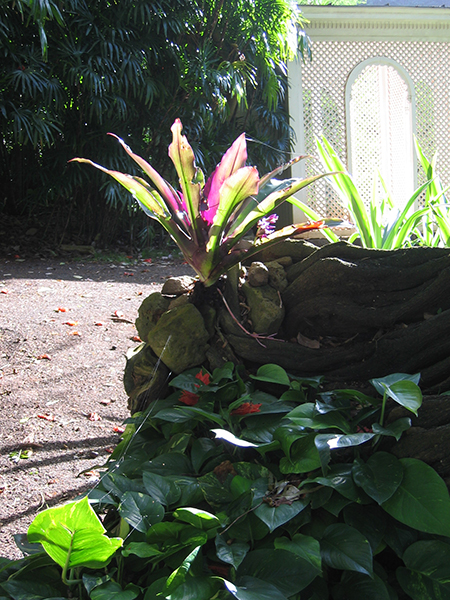 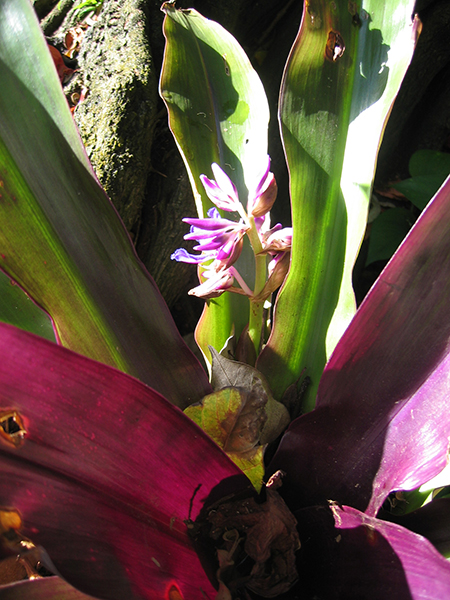 This species grows as an epiphyte, which means that its seeds germinate and the plant becomes established on the branches of trees and other raised surfaces. The stem of this plant does not elongate; therefore, the large, green to purplish colored leathery leaves (15-76 cm in length) develop in a basal rosette. The flowers are borne in stalked clusters that are less than 30 cm long therefore they do not extend out beyond the leaves. The flowers are deep violet-blue, 5 cm in diameter and very fragrant, which makes them a popular ornamental plant. The flowers have six stamens (the pollen producing structures in the flower) but only three of these are fertile. The three fertile stamens are fused at the base and extensions of this fused structure forms an unusual hood that encloses the spirally-coiled stamens. The three sterile stamens have conspicuous hairs that also makes them very distinctive. The fruit of Cochliostema odoratissimum is 3-parted and each section contains 10-12 ovules.


The sap of Cochliostema is irritating.
The genus Cochliostemma contains two species, both of which are native to South and Central America. Cochliostemma odoritissimum has a distribution across Costa Rica, Nicaragua, Ecuador, and Panama. It is found occasionally in cultivation in Hawai’i. The second species, Cochlistema velutinum, is either epiphytic or terrestrial and is distinguished by its narrower leaves and different flower features, including an ovary with hairs on its surface.

The generic name Cochliostema describes the spiral arrangement of the stamens of this species with the greek words cochli meaning spiral and stema in reference to the stamens. The specific epithet, odoratissimum, refers to the fragrant nature of the flowers which is unusual within the family Commelinaceae.
The Commelinaceae, the family in which Cochliosperma is placed, contains many species that are used as tropical ornamental plants including many that are found in Hawai‘i. Some examples included Fragrant callisia (Callisia fragrans), Blue ginger (Dichorisandra thyrsiflora), and Oyster plant (Tradescantia spathacea). The family can be easily recognized by the slightly succulent leaves with a basal sheath encircling the stem, the flowers parts in threes, the stamens with long, often brightly colored hairs, and the short-lived flowers.