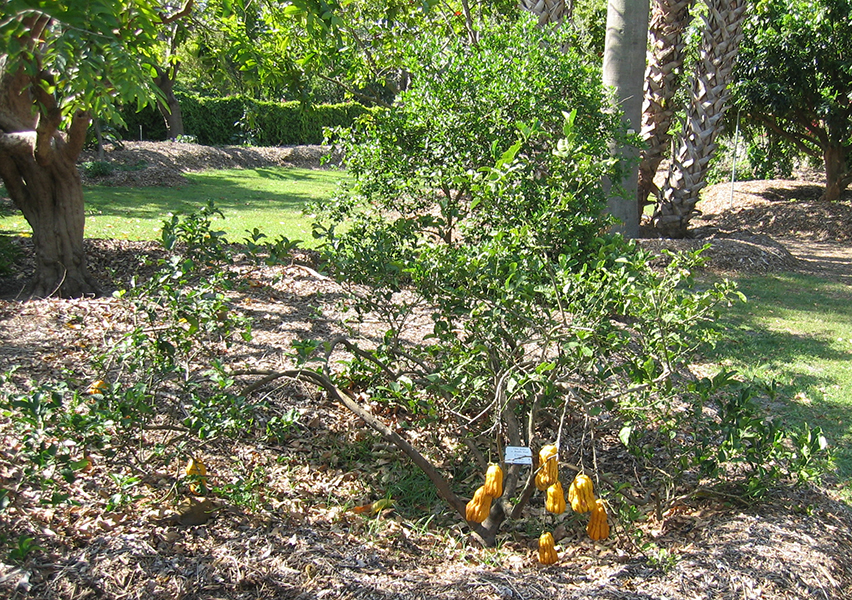 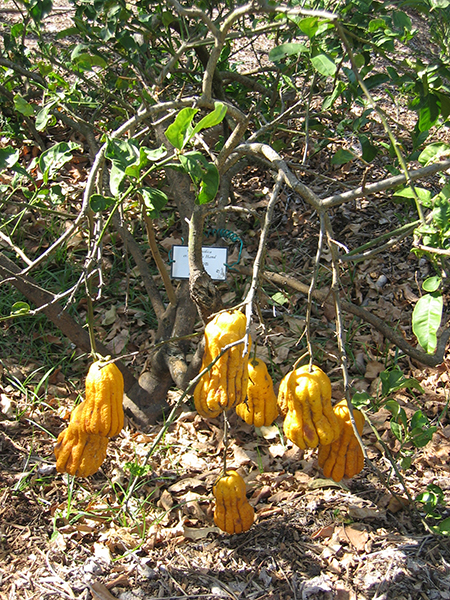 
Citron is a slow-growing shrub or small tree reaching up to 15 ft (4.5 m) in height with stiff branches and twigs and spines in the leaf axils. The evergreen leaflets are leathery, lemon-scented, ovate-lanceolate or ovate elliptic. The flower buds are large and white or purplish. The fragrant flowers have 4 to 5 petals and they are pinkish or purplish with 30 to 60 stamens. The fruit is fragrant, oblong or oval and very variable even on the same branch. The peel is yellow, usually rough and bumpy and very thick. The pulp is pale-yellow or greenish divided into as many as 14 or 15 segments, firm, not very juicy, acid or sweet and contains numerous seeds.
(Morton, J. 1987. Fruits of Warm Climates.)

In ancient times and in the Middle Ages, the "Ethrog" was employed as a remedy for seasickness, pulmonary troubles, intestinal ailments and other disorders. Citron juice with wine was considered an effective purgative to clean the system of poison. In India, the peel is a remedy for dysentery. The distilled juice is given as a sedative. The candied peel is sold in China as a stimulant, expectorant and tonic. In West Tropical Africa, the citron is used only as a medicine, against rheumatism. In Malaya, a decoction of the fruit is taken to drive off evil spirits. In Panama, they are ground up and combined with other ingredients and given as an antidote for poison. The essential oil of the peel is regarded as an antibiotic.
(Morton, J. 1987. Fruits of Warm Climates.)

Chinese and Japanese people prize the Citron for its fragrance. It is a common practice in central and northern China to carry a ripe fruit in the hand or place a fruit in a dish on a table to perfume the air of a room. The dried fruits are put with stored clothing to repel moths. In southern China, the juice is used to wash fine linen.
In some of the South Pacific islands a fragrant oil call "Cedrat Petitgrain Oil" is distilled from the leaves and twigs of Citron trees for the French perfume industry. The flowers have also been distilled for essential oil however this oil has limited use in scent manufacturing.
Branches of the Citron tree are used as walking sticks in India. The wood is white, hard and heavy, and of fine grain. In India, it is also used for agricultural implements.
(Morton, J. 1987. Fruits of Warm Climates.)

The Citron's place of origin is unknown but seeds were found in Mesopotamian excavations dating back to 4000 B.C. Spaniards probably brought the Citron with other Citrus species to St. Augustine in Florida but it survived there only in greenhouses. Today the Citron is grown in southern Florida only occasionally as a curiosity. Citron trees are not uncommon in some of the Pacific Islands but are rare in the Philippines.
(Morton, J. 1987. Fruits of Warm Climates.)

The most important part of the Citron is the peel, which is a fairly important article in international trade. The candied peel is sun-dried or put up in jars for future use. Candying is done mainly in England, France and the United States. The candied peel is widely employed in the food industry, especially as an ingredient in fruitcake, plum pudding, buns, sweet rolls and candy. In Guatemala, Citron is used as flavoring for carbonated soft drinks. In Malaya, Citron juice is used as a substitute for the juice of imported, expensive lemons. A product called "Citron Water" is made in Barbados and shipped to France for flavoring wine and vermouth.
In Spain, syrup made from the peel is used to flavor unpalatable medical preparations. If the citron lacks flavor, a few orange or lemon leaves can be added to the syrup
(Morton, J. 1987. Fruits of Warm Climates.)

Theophrastus wrote of Citron as the Persian Apple, and it was later called the Citrus Apple. The armies of Alexander the Great are thought to have carried the Citron to the Mediterranean region about 300 B.C. A Jewish coin struck in 136 B.C. bore a representation of the Citron on one side. A Chinese writer in A.D. 300 spoke of a gift of "40 Chinese bushels of Citrons from Ta-ch'in" in AD 284, in which Ta-ch'in is understood to mean the Roman Empire. The Citron was a staple, commercial food item in Rome in AD 301. There are wild Citron trees in Chittagong, Sitakund Hill, Khasi and Garo hills of northern India. Dioscorides mentioned Citron in the 1st Century AD and Pliny called it Malus medica, Malus Assyria and Citrus in AD 177. The fruit was imported into Greece from Persia (now Iran). Greek colonists began growing the Citron in Palestine about 200 B.C. By the year 1003, the Citron was commonly cultivated at Salerno and fruits (called Poma Cedrina) were presented as a token of gratitude to Norman lords. For centuries, this area supplied Citron to the Jews in Italy, France and Germany for their Feast of the Tabernacles (sukkot) ceremony. Moses had specified the cone of the cedar, Hadar (Kedros in Greek) and when it fell into disfavor it was replaced by the Citron. The Palestine Greeks called the latter Kedromelon (Cedar Apple). Kedros was latinized as Cedrus and this evolved into Citrus, and subsequently into Citron. For many years, most Citrus species were identified as botanical varieties of Citrus medica.
(Morton, J. 1987. Fruits of Warm Climates.)

We currently have 1 herbarium specimens for Citrus medica in our collection. Click on any specimen below to view the herbarium sheet data.