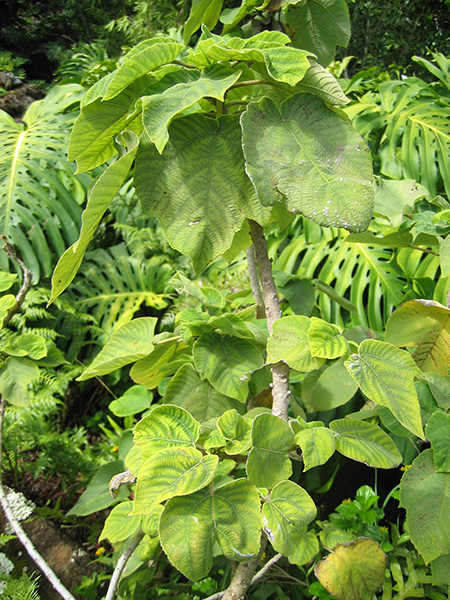 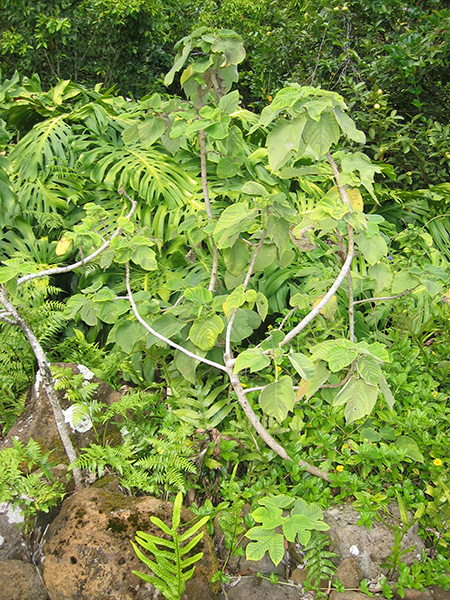 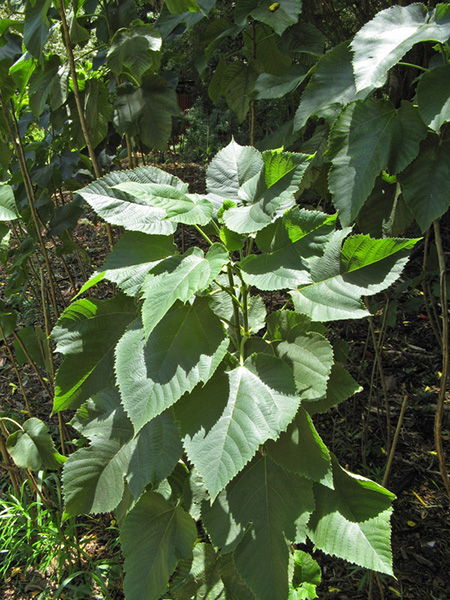 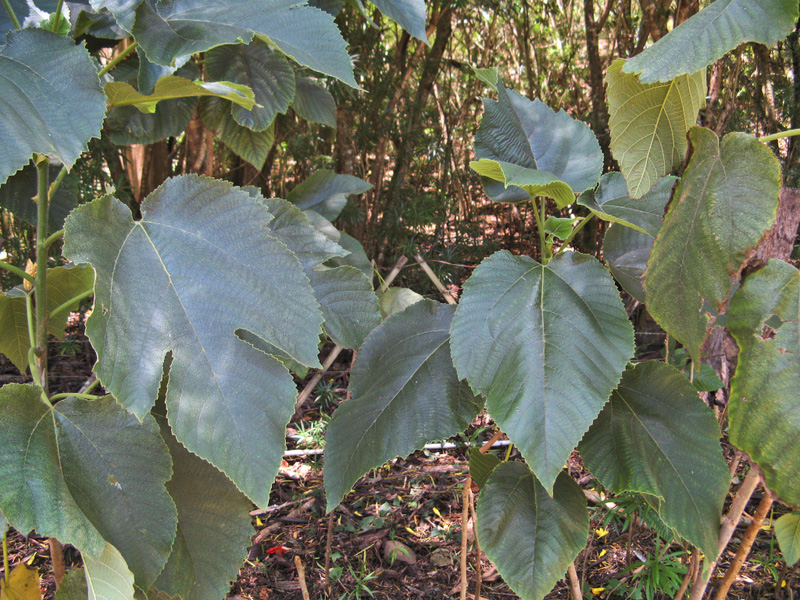 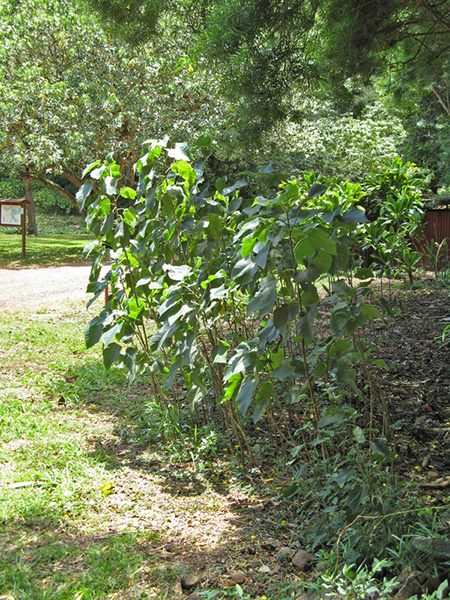 Wauke is a shrub or small tree reaching 40 feet, round crown, sprouts readily from roots so it often forms thickets. The bark is greenish gray when young, developing shallow furrows with age and turning grayish brown. Old trees become gnarly. The leaf is alternate, sometimes opposite, simple, oval to heart shaped, 3 to 8 inches long with serrated margin. On fast growing shoots the leaves may develop deep, irregular sinuses, upper surface quite rough, velvety beneath, milky sap exudes from petioles. The flower is dioecious, the male flowers are elongated, 1 to 2 1/2 inches long and occur in groups, the female flowers are round 1/2 inches in diameter. Initially both are pale and dull green, appearing in April to May. The fruit is round, 3/4 inch in diameter, an aggregate of red drupes.
(Virginia Tech Forestry Department. 2003.)

Medicinally, the slimy sap of Wauke is a mild laxative. Thrush, a mouth disease, is said to be improved when the ash from burned kapa made from Wauke is applied to the mouth.
(Krauss, B. H. 1993. Plants in Hawaiian Culture.)
(Kepler, A. K. 1998. Hawaiian Heritage Plants.)

Wauke is the principle plant used in the making of kapa, or tapa cloth. Kapa means the beaten thing. One of the principle plants introduced by early voyaging Polynesians who settled in Hawai'i, Wauke is thought to have been carried in the canoes as root shoots, but can also be grown from cuttings and occasionally by seed.
The ancient practice of making bark cloth and bark paper likely began in Asia, where other species of Broussonetia are known, yet in Polynesia, Broussonetia papyrifera reigns supreme. The quality of its cloth is prized and valuable, warm, water resistant, long lasting, washable, soft, mothproof, flexible and white. In Polynesia, the loom and weaving of fibers did not occur, possibly because there were no mammals of size to provide hair. Cotton, flax, hemp and silk were not grown in Polynesia at the time.
Nurtured and carefully tended by both men and women, Wauke was grown around the lo'i, taro pond fields, and near home sites in thick stands of 8-9 foot tall trees. As the Wauke tree grew, planters cut off the side branches, so a straight trunk stalk without branch holes could later be stripped. In 6-10 months the trunk shoots were cut down and the roots and tops removed. The trunks were stripped of bark, as thick as a finger and about 4 feet long. The outer bark was slit and peeled off. The inner bark fibers, called bast, were then soaked in running water, such as a high tide pool, with stones placed on top of the fiber pile. This part of the process breaks down the woody fibers and washes away the starch. A complicated process of soakings and fermentation followed, leaving the fine fibers of the moist inner bark still tough and resilient when finally removed from the waters. At this time in the process, the women of Hawai'i would often twist cordage out of the fibers, for use as fish nets, upena, and as carrying nets, koko, from which to hang calabashes of wood and gourds. The women then spread the strips of inner bark to be used for cloth into several layers, all of the same thickness. After the water was drained away, the fibers began to stick together and the entire bundle could be lifted as one mass. It was beaten on smooth rocks and sun dried. The bundle was often stored until enough material had accumulated to make a large piece of kapa cloth. When enough bundles were accumulated, these were soaked for half a day, then pounded gently to loosen the fibers. They were then laid between layers of banana leaves, for a week to mature and ferment, making the fibers softer, almost like the leavening process in bread making. These cakes of Wauke were then kneaded until elastic. When ready, the women laid the bundle on a long piece of wood with a flat even surface, an anvil called kua kuku. Then the women beat the pulp with a simple heavy mallet, a wooden beater until a solid strip formed. The beating established a rhythm with resonating sounds, which often sent secret codes rapidly from village to village. After this, the strips were soaked again. The cloth expanded greatly with each beating. It was often doubled over and beaten again. Most wooden beaters used in the final stage, were four-sided, made from 'ohi'a wood, carved and incised with stamps in intricate geometric designs and patterns. At this point in the process, the cloth was hung in the sun to dry and to bleach whiter. The quality of the kapa varied according to the bark quality and the skills of the maker. After the kapa was completed, intricate designs were added to some of the cloth with dyes and a high quality of colored stamped patterns. These were unique to Hawai'i and are considered a lost art form, although in the last 15 years a few people have resumed the making and stamping of kapa in the old way, renewing this lost art. Kapa means the beaten. The beaters, anvils and stamps were made by the men of the village. The dyes came from varied natural plant sources. Pigmentation comes in many colors, predominantly black, from burying the cloth in the mud of a Kalo lo'i, brown from kukui root bark and red from its bark, yellow and orange from the tuber of 'Olena, red from Noni's bark and yellow from its root. Geometric designs with inherent symbolism, such as lines, triangles, circles and chevrons were imprinted using stencils and stamps usually carved in bamboo. Sticky adhesives were used to waterproof the kapa.
The clothing made were a wrap (kikepa), a knee length wrap-around skirt called pa'u (pareau, sarong, lava lava), the principle garment for women of early Hawai'i and a loin cloth (malo) for men. Also sandals, hula costumes and bed clothes were maid of kapa.
The inner bark was used for paper making in Asia.
(Krauss, B. H. 1993. Plants in Hawaiian Culture.)
(Kepler, A. K. 1998. Hawaiian Heritage Plants.)


Broussonetia papyrifera originated from East Asia, China.
Kapa figured in several Hawai'i legends. One of these legends is about the god Maui and his mother, the goddess Hina, and how he lassoed the sun from Haleakala to slow down the day, so it would be warm long enough to dry his mother's kapa cloth.
(Krauss, B. H. 1993. Plants in Hawaiian Culture.)
(Kepler, A. K. 1998. Hawaiian Heritage Plants.)

We currently have 15 herbarium specimens for Broussonetia papyrifera in our collection. Click on any specimen below to view the herbarium sheet data.