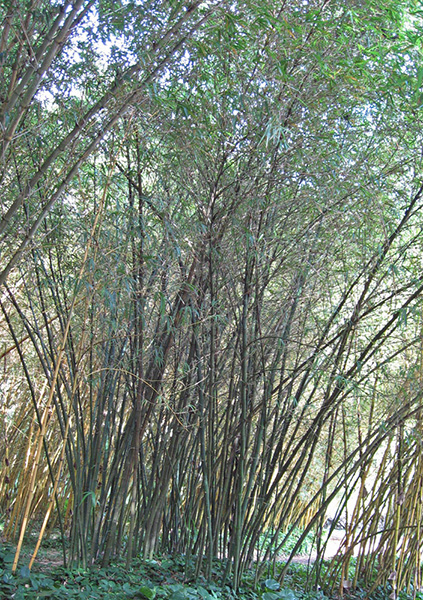 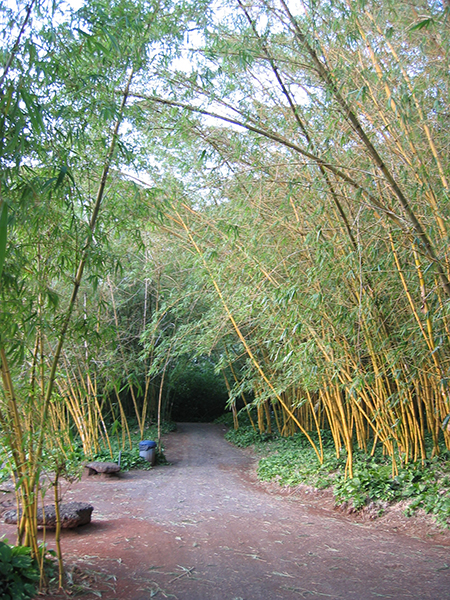 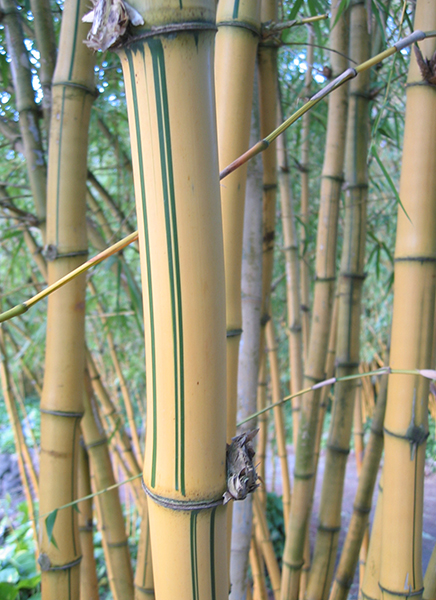 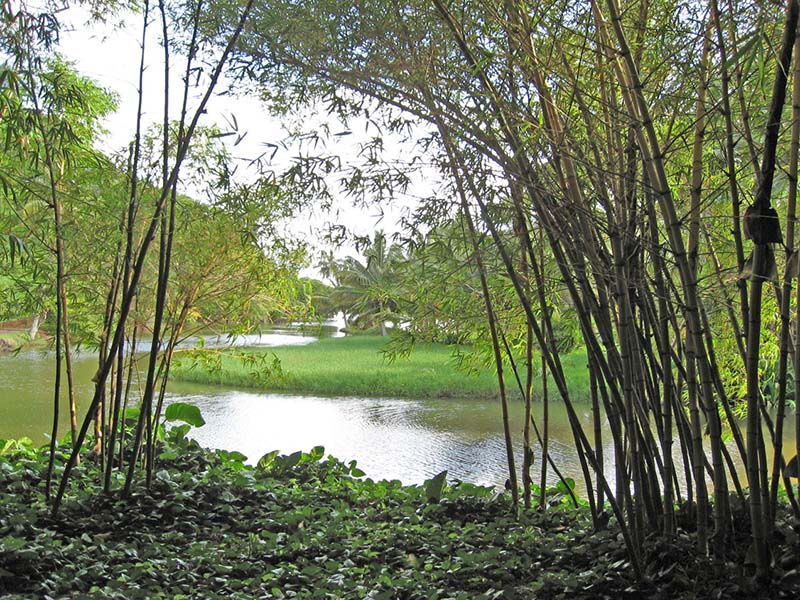 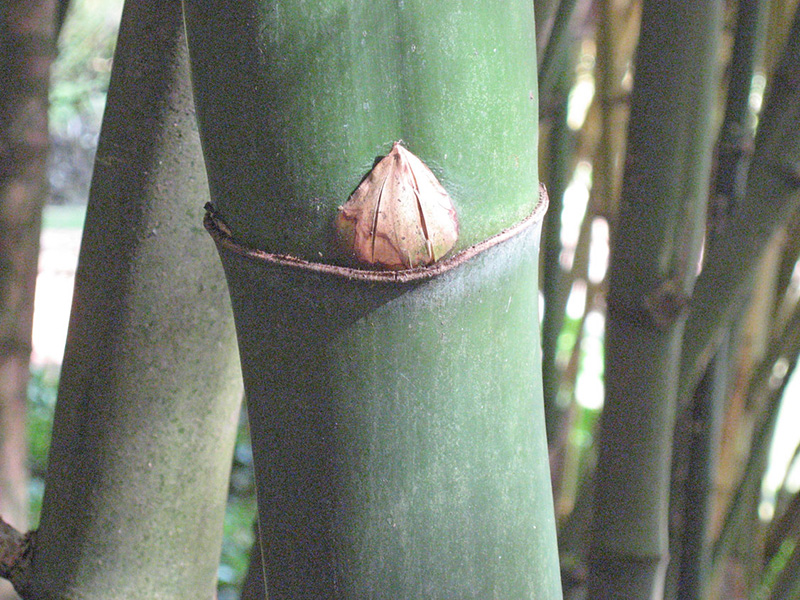 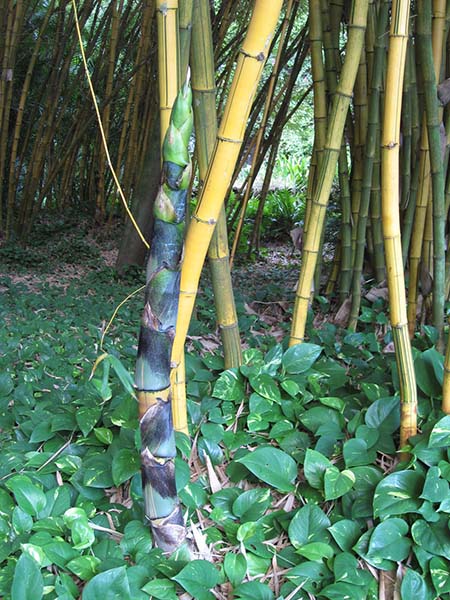 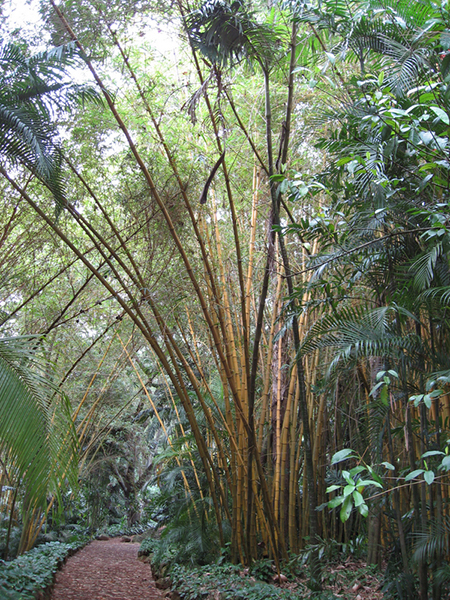 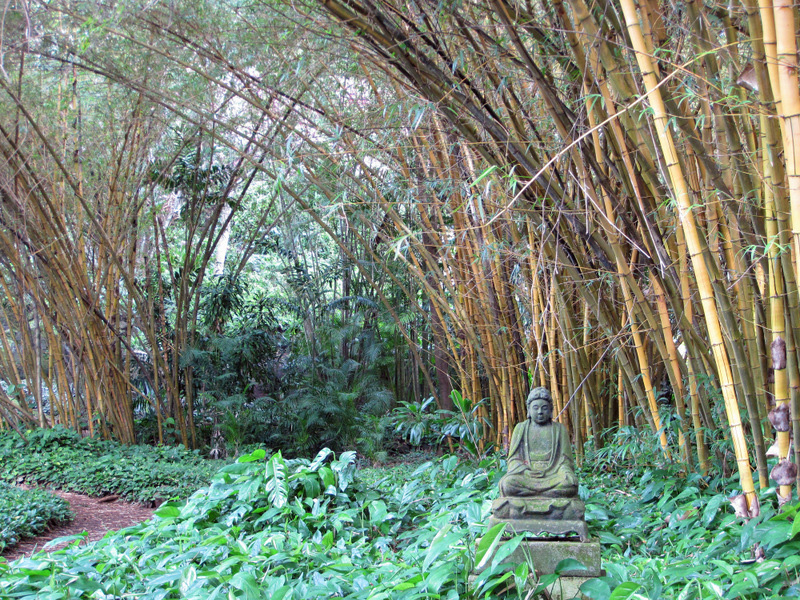 Bamboos are giant, fast-growing grasses that have woody stems. The woody, hollow aerial stems (culms) of bamboo grow in branching clusters from a thick underground stem (rhizome). The culms often form a dense undergrowth that excludes other plants. Bamboo culms can attain heights ranging from 10 to 15 cm (about 4 to 6 inches) in the smallest species to more than 40 m (about 130 feet) in the largest. The stems have hollow walls with internodes and thick hard nodes joining them. Mature bamboos sprout horizontal branches that bear sword-shaped leaves on stalked blades. The leaves on young culms arise directly from the stem.
Most bamboo flower, but only once in 60-120 years, with large heads much like those of sugar cane. After blooming, all of the bamboo plants of the same species die back. This happens worldwide at the same time!
(Taylor, N. 1994. Taylor's Master Guide to Gardening.)
(Krauss, Beatrice H. 1993. Plants in Hawaiian Culture.)

In Trinidad and Tobago, owners of dogs use the leaves of Bambusa vulgaris to treat diarrhoea and to control ectoparasites such as ticks and fleas.
Bamboo, as well as niu, coconut, is one of the most useful and practical plants for humankind, providing water storage, food, raw materials for household and garden use, musical instruments and more.
Bamboo wood has silica in its cell walls and is hard, straight, strong, flexible, light and easily split. Split bamboo can be made into mats, hats, screens, baskets, fans, umbrellas, brushes, paper, ropes, roofing tiles, wall mats, or as a part of the sleds of old Hawai'i, called holua.
The stem of bamboo has been carbonized for use as electric lamp filaments, in goldsmithery, and tabashir, a fine powder used as a chemical catalyst.
(Krauss, Beatrice H. 1993. Plants in Hawaiian Culture.)

Another species of bamboo (Schizostachyum glaucifolium) called 'Ohe by the Hawaiians, is said to be one of the "canoe plants" brought to Hawai'i by early Polynesian settlers in their oceanic navigation. This plant may have originated in India or Java.
Bamboo is distributed in tropical and subtropical to mild temperate regions, with the heaviest concentration and largest number of species in East and Southeast Asia and on islands of the Indian and Pacific oceans.
A few species of bamboo belonging to the genus Arundinaria are native to the southern United States, where they form dense canebrakes along riverbanks and in marshy areas.
(Krauss, Beatrice H. 1993. Plants in Hawaiian Culture.)

Bamboo shoots for cooking are very young shoot tips, harvested before they become woody. If you are eating bamboo shoots, you may also be using chopsticks made of bamboo or feasting on kabobs with bamboo skewers.
Seeds of some varieties are also eaten.
(Krauss, Beatrice H. 1993. Plants in Hawaiian Culture.)

'Ohe is said to be the kinolau, body form, of the Polynesian creator god Kane, along with kalo,taro and ko,sugar cane.
(Krauss, Beatrice H. 1993. Plants in Hawaiian Culture.)

We currently have 8 herbarium specimens for Bambusa vulgaris in our collection. Click on any specimen below to view the herbarium sheet data.