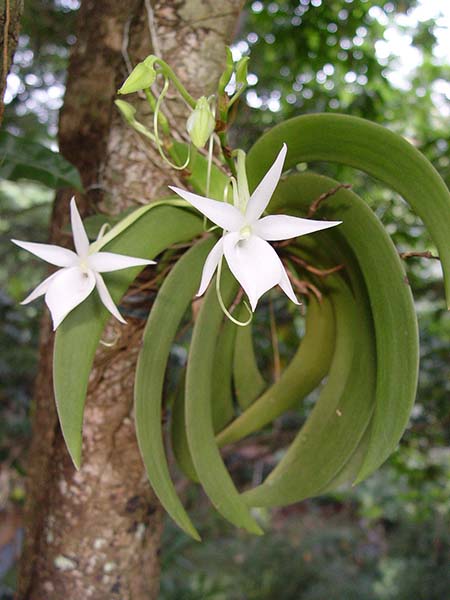 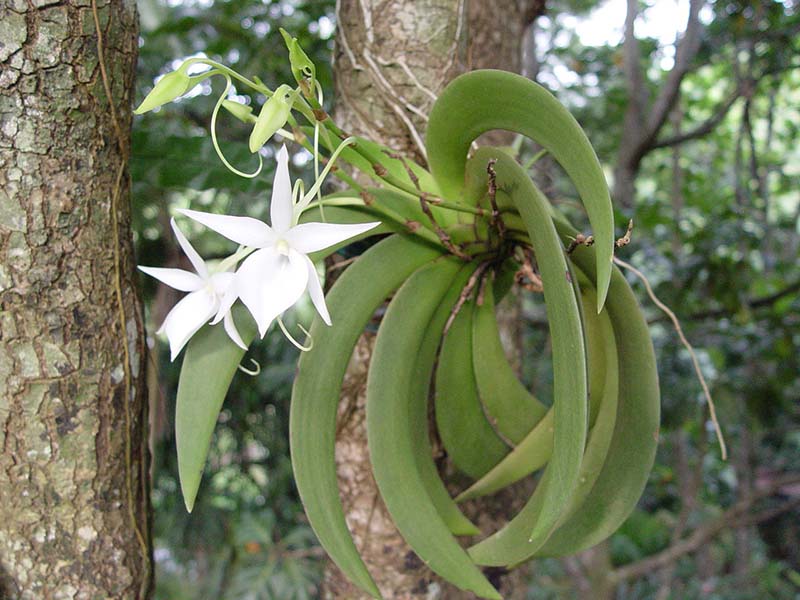 
Angraecum leonis is a small epiphytic plant. It has leathery leaves that are sickle-shaped, can grow up to 25.4 cm long, and are arranged in a single plane along the stem with each leaf at a180o angle from the preceding leaf. It produces 1-7 inflorescences or clusters of flowers with white star-shaped flowers. The flowers are quite long lasting with a scent resembling that of jasmine flowers. The sepals and petals of the flowers are widely spreading producing flowers that can be up to 10 cm in diameter, are white to pale green in color, and are wide at the base and narrow gradually towards the tip. As with all Orchid species, one petal is modified to form the lip which, in this species, is larger than the other petals. The lip is fused with another structure, the column, which surrounds the pollen and ovule producing structures. The lip of Angraecum leonis has a long spur at the base.

The genus Angraecum contains 220 species with a center of diversity in tropical Africa. Angraecum leonis is native to Madagascar and the Comoros Islands in the Indian Ocean to the southeast of Africa.

Like all species in the genus Angraecum the species called Darwin’s orchid (Angraecum sesquipedale), a native of Madagascar, contains a large spur that can be as long as 30 cm in length at the base of the flower. In 1862, observation of the long spur of Angraecum sesquipedale led Charles Darwin to suggest that the pollinator of this species must have a long tongue to enable it to reach the nectar reward, which is held at the base of the spur. A hawk moth species, Xanthopan morganii praedicta, was identified as the pollinator of this orchid species more than 40 years after Darwin’s death in 1882. As Darwin predicted, this hawk moth has a proboscis or feeding tube that is the same length as the spur of Angraecum sesquipedale. This ensures that the hawk moth will visit the orchid to obtain the nectar and while feeding on the nectar will come in contact with the anthers that produce the pollen in the orchid flowers. If the pollen adheres to the hawk moth the insect may transfer that pollen to other flowers that it visits to obtain more nectar. The hawk moth is a very specialized pollinator of this orchid species. This close association is called co-evolution as each species is thought to have influenced the evolution of the other.

The genus name Angraecum is derived from the Malay word angrek or angurek meaning Orchid.
This species is increasingly observed as an ornamental plant in cultivation. The leaves are closely packed and sickle shape therefore the plant has a striking fan-shaped appearance. It is popular as an ornamental plant as it is quite hardy and can tolerate occasional dry periods. It also produces multiple flower clusters and will flower in low light. Although only a single species is recognized the plants produced from stock native to Comoros Islands have larger leaves and inflorescences than those native to Madagascar and are more common in cultivation.
Search Again