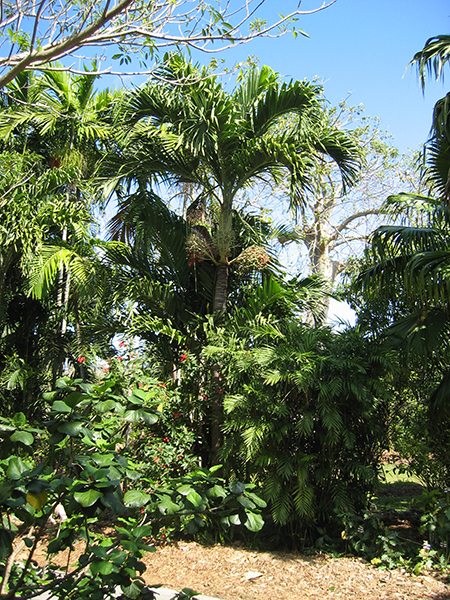 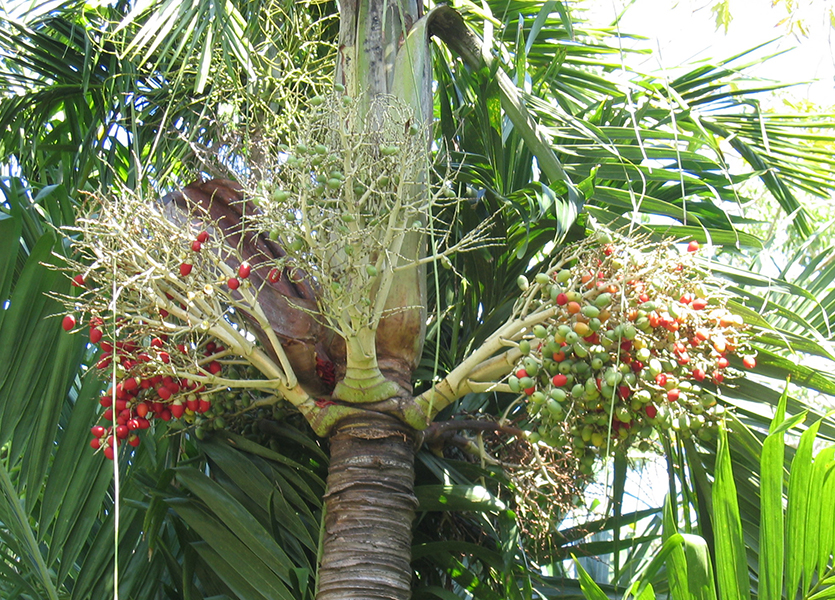 Manila palm is a palm with a single stem that grows from 5-25 m in height. It has a compact crown containing around 14 compound, pinnate (feather-like) fronds or leaves that grow up to 1.5 m in length. Compound leaves are made up of many leaflets that grow up to 0.6 m long and 5 cm wide. Flower clusters (inflorescences) develop in the leaf axils (in the angle above the junction of the leaf base and the stem). When mature, they are situated below the leaves and are 56 cm long. Pollen and ovule producing flowers are separate, although they are both present in a single inflorescence. Staminate (male) flowers can contain up to 200 anthers in which the pollen is produced. The fruits contain a single seed and are 3.0 cm long and 1.9 cm wide. Fruits begin to develop in the fall and by winter ripen to a bright red color and are visible beneath the foliage producing a Christmas tree-like effect.

(Johnson, D. 1998. Adonidia merrillii. In: IUCN 2006. 2006 IUCN Red List of Threatened Species.
Manila palm is shielded from over exploitation due to the remote location of the naturally occurring populations. Ongoing development of coastal habitats, however, threatens the remaining populations. In cultivation it grows well in well drained soils in full sun. It is easily propagated from seeds that germinate within 1-3 months. Widely cultivated in many tropical regions.
This species is native to the Philippines where it is found in coastal areas in the vicinity of Coron on Palawan Island. It grows in open forest found on steep limestone soils. The genus Veitchia contains nine species and has a center of diversity in the eastern Pacific, on the islands of Vanuatu, Fiji, and Tonga. Veitchia merrillii is thought to be more distantly related to the remaining Veitchia species and is placed in the genus Adonidia by some authors.

(Johnson, D. 1998. Adonidia merrillii. In: IUCN 2006. 2006 IUCN Red List of Threatened Species.
Manila palm is considered a host for a plant disease called Lethal Yellowing that is found in the Florida, Puerto Rico, and Guam. Lethal Yellowing is a disease that causes Coconut palms to drop their undeveloped and developed fruit, causes new inflorescences to turn black, and the fronds to turn yellow. Lethal Yellowing is thought to be caused by organisms called mycoplasmas that are transmitted by the American palm cixiid, Myndus crudus.
The genus name Adonidia refers to Adonis, the Roman sun god.
Manila palm is listed as near threatened on the IUCN red list due to habitat loss, habitat degradation, competition from introduced species, and herbivory. This species is widely cultivated in tropical regions.

We currently have 3 herbarium specimens for Adonidia merrillii in our collection. Click on any specimen below to view the herbarium sheet data.