Kahanu Garden and Preserve provides a glimpse back in time. At the core of the botanical garden is Pi’ilanihale Heiau, the largest single heiau (place of worship) in all of Polynesia. Early Polynesian voyagers often settled where there was abundant rainfall and fertile soil for reliable farming. These mahi ‘ai (farmers) gradually formed communities with relatively simple social structures. Around the 13th century, with the arrival of a later wave of Polynesian voyagers, a more stratified social hierarchy began to emerge. By the early 15th century kingdoms had formed throughout the Hawaiian Islands accompanied by an increased social stratification that included a ruler, high chiefs, and low chiefs holding power over the commoners. It is likely the construction of larger heiau, ancient religious structures, occurred at that time. 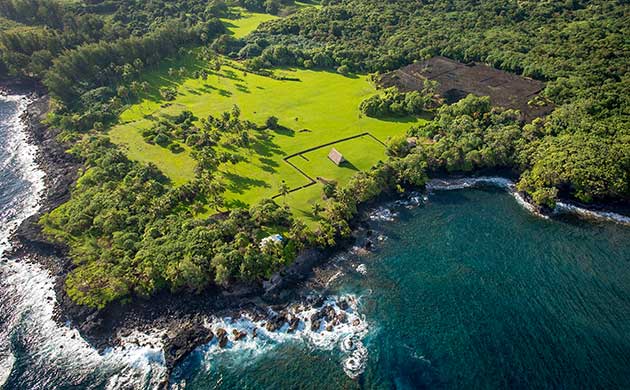 For many generations the ahupua’a (land division) of Honoma’ele, in which Kahanu Garden is located, was an important agricultural area, a thriving community that prospered under the guidance of their ali’i (chiefs). Oral legends and chants recall that by the latter part of the 16th century, the renowned Chief Pi’ilani united the entire island of Maui under one rule with Kapueokahi (Hana Bay) as one of the royal centers of the kingdom.

Archaeological evidence indicates that the massive Pi’ilanihale Heiau (literally “House of Pi’ilani”) was built in several stages, beginning perhaps as early as the end of the 13th century. Despite its name, which suggests that Pi’ilani may have built part of the structure or resided there, there is no direct evidence to indicate whether he had a role in its construction. Oral histories mention that Pi’ilani and his immediate heirs lived in Hana, but they refer to residences and luakini (“national”) heiau at Hana Bay. Whatever the true history may be, it is clear that the heiau was built by a powerful ruler, that it was a place of religious activities, and that the ruler and his high chiefs are likely to have resided there or nearby.

Hana continued to be a center of royal power until 1794, when Kamehameha, ruler of the Kingdom of Hawai’i, defeated the Maui army and Maui became part of that kingdom; thereafter Hana gradually faded in importance. In 1848, the Hawaiian Monarchy was created and private land ownership was established. As a direct result of the Great Mahele, one-half of the ahupua’a of Honoma’ele, roughly 990 acres, was granted to Chief Kahanu by Kauikeaouli (King Kamehameha III).

Since then Honoma’ele has gone through several major land-use changes. In the early 1860’s Hana Plantation was formed and the area became a thriving sugar plantation community. After many years of bustling agricultural activity under successive owners, the plantation closed in 1946 and Hana Ranch transformed the old sugar fields into pastures for grazing cattle. 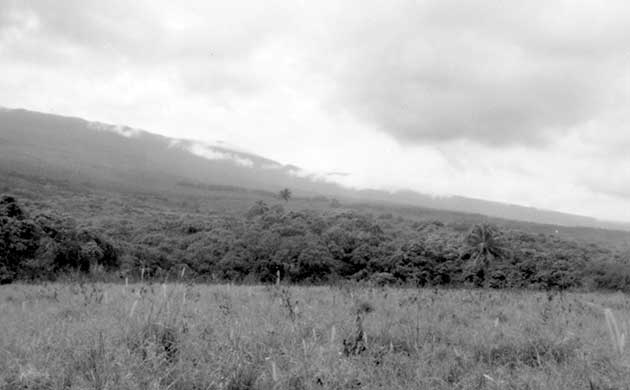 In 1974, members of the Kahanu/Uaiwa/Matsuda/Kumaewa Family (descendants of Chief Kahanu) and Hana Ranch deeded 61 acres of land to the then Pacific Tropical Botanical Garden to establish Kahanu Garden. In exchange, the institution promised to restore Pi’ilanihale, share it with the public, and provide perpetual care for this sacred site as well as the family graves that are on this ‘aina (land). In the same year, an anonymous donation made possible the purchase of an adjoining 62 acres of land, thereby increasing Kahanu Garden’s size to 123 acres. Through purchases of adjoining property in 2008, the property grew to its current total of 293 acres.

Clearing of the land and planting of the first collections began in 1972, two years before the formal transfer of land was completed. From its earliest years, Kahanu Garden was fortunate to have Francis Kikaha Lono as an employee. He was affectionately known as “Uncle Blue,” because he was a blue-blooded Hawaiian in every sense. Until his retirement in 2001, Uncle Blue was synonymous with Kahanu Garden, leaving a significant and lasting imprint on the garden.

During Kahanu Garden’s formative years the Pacific Tropical Botanical Garden availed itself of the excellent tropical growing conditions with abundant rainfall to establish interesting, and often eclectic, collections. In addition to planting many diverse tropical flowering trees, one of the first collections established at Kahanu Garden was the Vanilla Orchid.

Major additions followed, including the Mary Wishard Coconut Grove with 21 varieities and the breadfruit collection with 150 varieties. This set the stage for developing other collections of ethnobotanical plants, including those traditionally used by the Hawaiians like taro, sweet potato, sugarcane, banana, and ‘awa. These plants are located throughout the garden some leading up to Pi’ilanihale. Complementing the traditional Hawaiian plants are many rare and endangered native coastal species that are planted in natural habitats along the coastline. 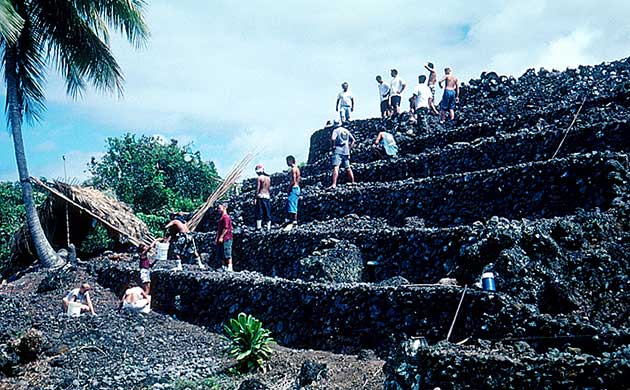 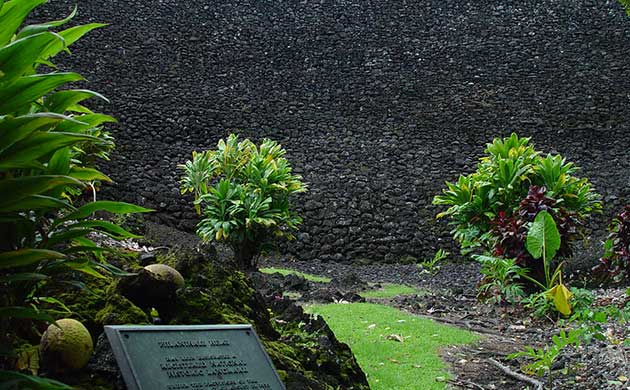 A monumental effort to clear the encroaching jungle that had completely covered Pi’ilanihale and to restack and stabilize its massive terraced retaining walls began in 1974 by Garden staff and volunteers. After more than two decades of sporadic but necessary work, a major effort to complete the stabilization project was launched in 1998, with the oversight of archaeologists from the Bishop Museum and the State of Hawai’i. Some of the very best stonemasons in Hana worked intensively to restack the dry-laid terrace walls that support this immense structure. Their dedication and hard work paid off, and in 1999 the entire stabilization effort was finally complete. The stone walls and terraces that had been degraded over so many decades by the jungle stood proudly once again.

Another important milestone for Kahanu Garden was the completion of a comprehensive master plan in 2005. The plan resulted from an inclusive five-year process that invited all stakeholders to participate in developing culturally appropriate guidelines for the management and oversight of the sacred sites and the surrounding property.

In keeping with its historical and cultural significance, Kahanu Garden today honors the past as we look toward the future – cultivating and preserving both Hawaiian native plants and special varieties or cultivars of the ethnobotanic plants of Hawai’i and the greater Pacific. Here one can experience both the grandeur of ancient Hawai’i, as well as the culture of today.