Three related species—Artocarpus altilis (Parkinson) Fosberg, Artocarpus camansi Blanco, and Artocarpus mariannensis Trécul—make up what is known as the “breadfruit complex.” They are members of the Moraceae (fig) family. The nutritious fruit and seeds of all three species are edible. The multipurpose trees are easy to grow, beneficial to the environment, and produce an abundance of nutritious, tasty fruit. They also provide construction materials, medicine, fabric, glue, insect repellent, animal feed, and more. The trees begin bearing in 3 to 5 years and are productive for many decades. This ‘tree of bread’ has the potential to play a significant role in alleviating hunger in the tropics. 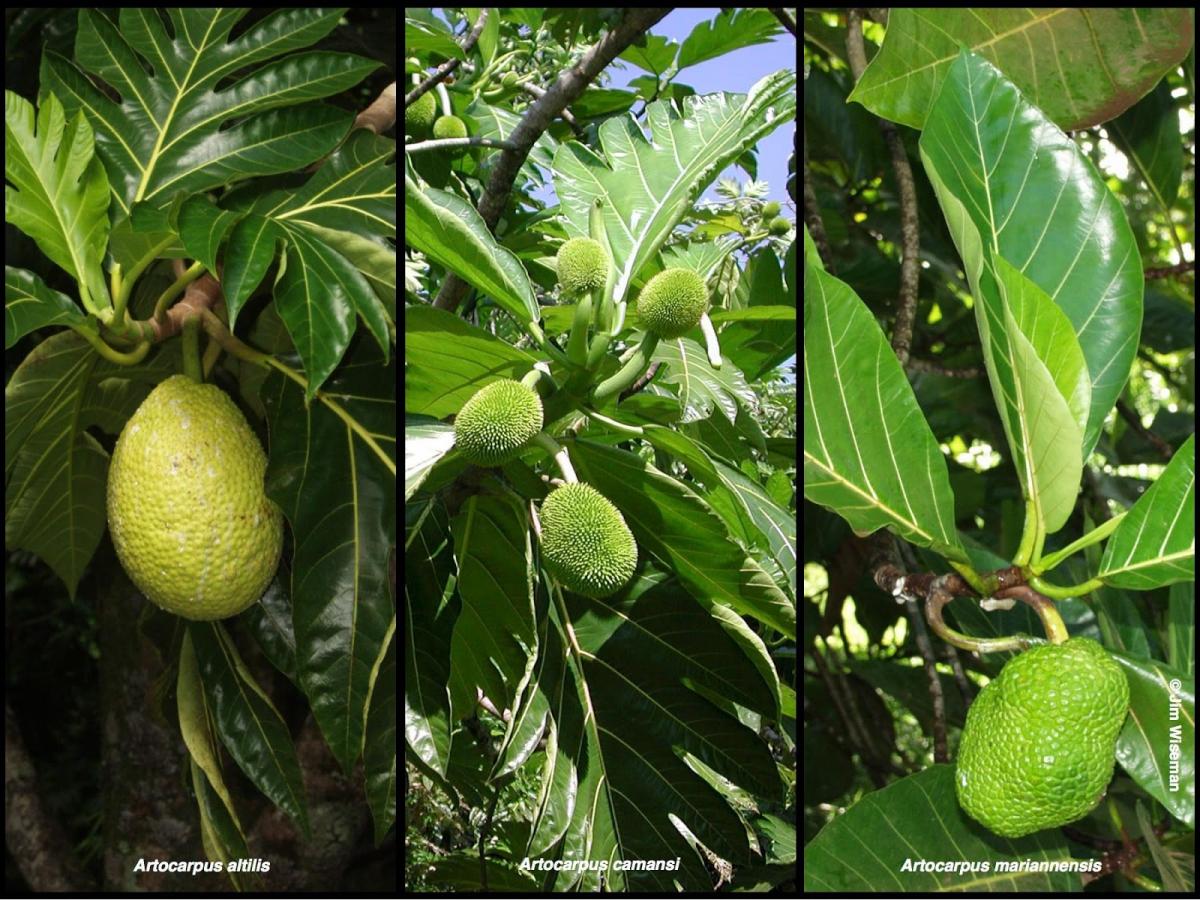 The scientific or Latin name of breadfruit is derived from Greek (artos = bread, karpos = fruit), and altilis means ‘fat’. Baked or roasted in a fire, the fruit has a starchy texture and fragrance that is reminiscent of fresh baked bread. Breadfruit has been an important staple crop and primary component of traditional agroforestry systems in the Pacific for more than 3,000 years. This species originated in the South Pacific and was spread throughout Oceania by intrepid islanders settling the numerous islands of Melanesia, Micronesia, and Polynesia. Hundreds of varieties have been cultivated and more than 2,000 names have been documented. 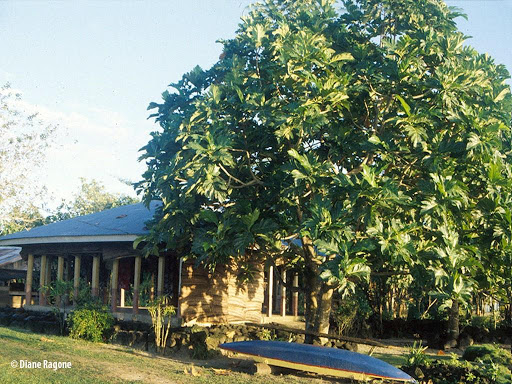 The tree is grown on most Pacific Islands, with the exception of New Zealand and Easter Island. It is now cultivated throughout the tropics. Due to the efforts of Captain Bligh and French voyagers, a few seedless varieties from Polynesia were introduced to the Caribbean in the late 1700s. These Polynesian varieties were then spread throughout the Caribbean and to Central and South America, Africa, India, Southeast Asia, Madagascar, the Maldives, the Seychelles, Indonesia, Sri Lanka, northern Australia, and south Florida. Breadfruit is now grown in close to 90 countries. Breadfruit is a versatile crop and the fruit can be cooked and eaten at all stages of maturity. The seeds are also edible when cooked.

An evergreen tree (12-15 m up to 21 m), breadfruit tends to have a denser, more spreading canopy than Artocarpus camansi. Leaves (15-60 cm or longer) are almost entire to deeply dissected with 1-6 pairs of lobes. Fruit (10-30 cm long × 9-20 cm wide) vary in shape, size, and skin texture. They are usually round, oval or oblong weighing 0.25-6 kg. Skin texture ranges from smooth to rough to spiny. The color is light green, yellowish-green or yellow when mature, although one unusual variety (‘Afara’ from French Polynesia) has pinkish or orange-brown skin. The flesh is creamy white to pale yellow. Fruit are typically mature and ready to cook and eat as a starchy staple in 15-20 weeks. Ripe fruit have yellow or yellow-brown skin and soft, sweet, creamy flesh that can be eaten raw or cooked. Fruit contain no to many seeds depending upon the variety. Seeds have a pale to dark brown seed coat. Seeds germinate immediately and cannot be dried or stored. They are rarely used for propagation. Breadfruit is usually vegetatively propagated using root shoots or root cuttings. 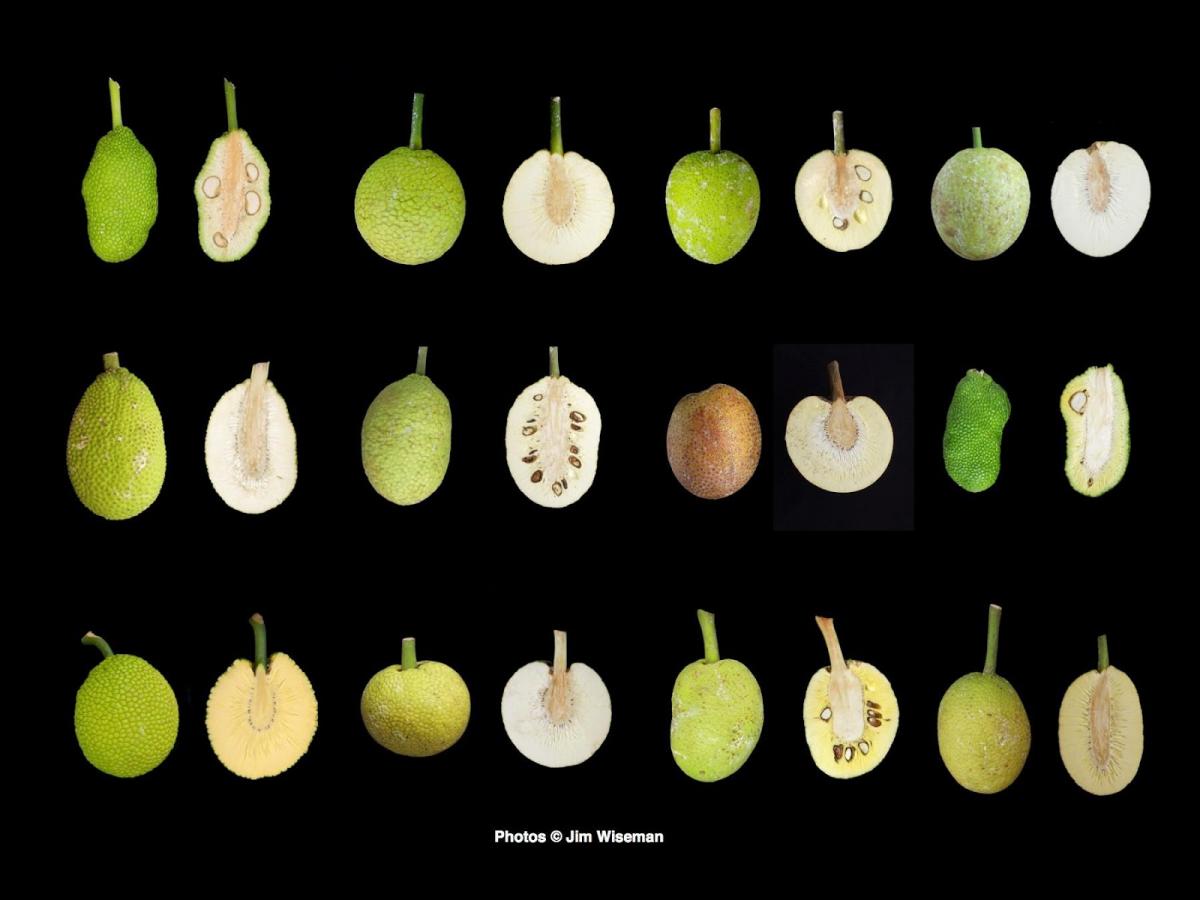 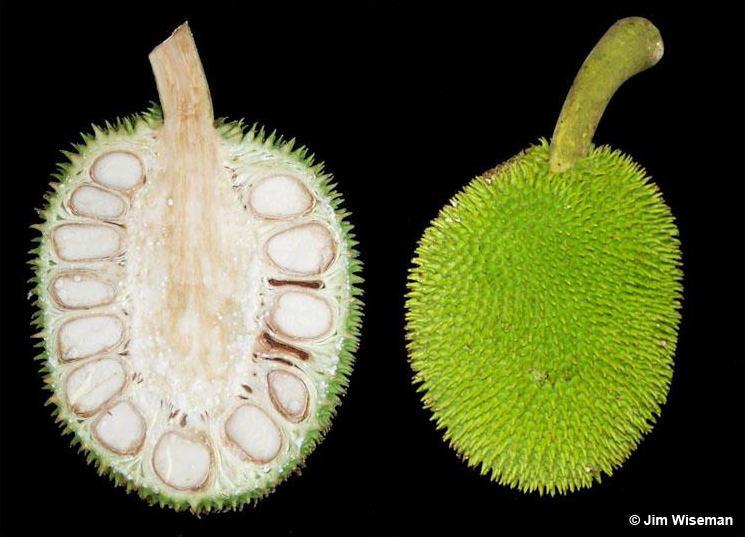 Breadnut is native to New Guinea, and possibly the Moluccas (Indonesia) and the Philippines. This species is propagated by seed. In New Guinea, it is widely scattered in alluvial forests in lowland areas and naturally spread by birds and fruit bats that feed on the fruit and drop the large seeds. It is also cultivated in home gardens. It only occurs in cultivation in the Philippines where it is typically grown as a backyard tree. Breadnut is often considered to be a form of seeded breadfruit. However, it is a separate species and the ancestor of seeded and seedless breadfruit (A. altilis) 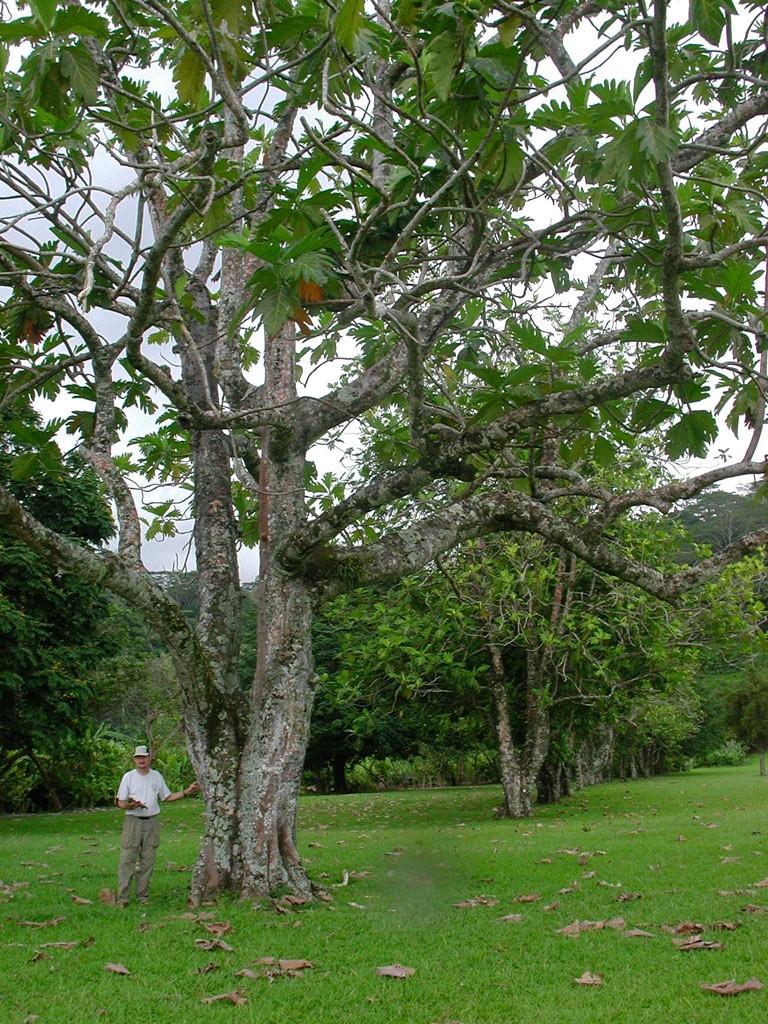 Breadnut is infrequently grown in the Pacific outside of its native range. A few trees are now found in New Caledonia, Pohnpei, FSM, the Marquesas, Tahiti, Palau, and Hawaii, introduced by immigrants from the Philippines in recent years. While breadnut is uncommon in Oceania, it has long been grown and used in other tropical regions. Beginning in the late 1700s, the French spread breadnut throughout the tropics and it is now widespread in the Caribbean, Central and South America, Southeast Asia, and West Africa. 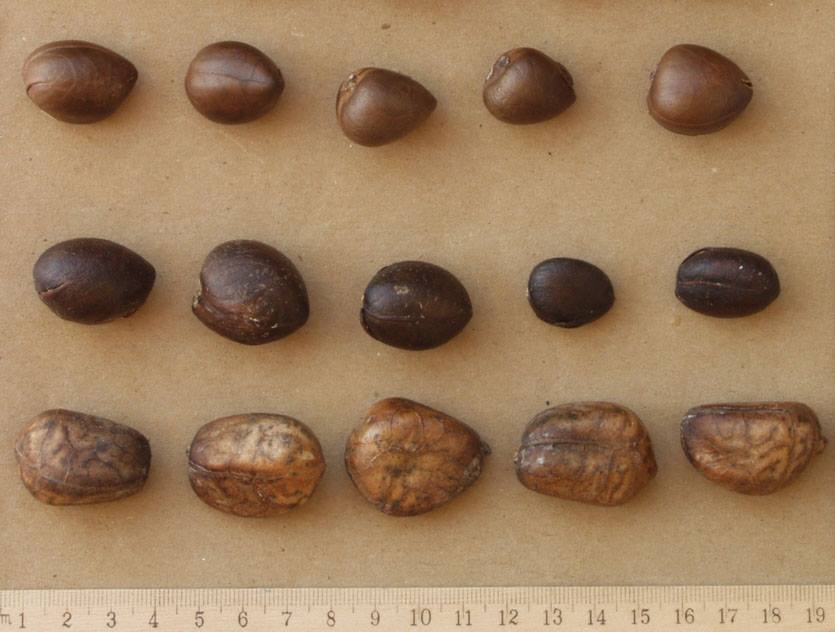 The tree grows up to 20 m tall. It typically forms buttresses at the base of the trunk and has a more open canopy than Artocarpus altilis or A. mariannensis. Leaves are large (40-60 cm long) and moderately dissected with 4-6 pairs of lobes. The oblong, spiky fruit is dull green to greenish-brown when ripe. As evident by the name, this species is mostly grown for the numerous large, nutritious seeds or “nuts.” The immature fruit and seeds are often consumed as a vegetable in soups, stews, or salads after the entire fruit is thinly sliced, then boiled. The seeds can be boiled or roasted and resemble chestnuts in texture and flavor. 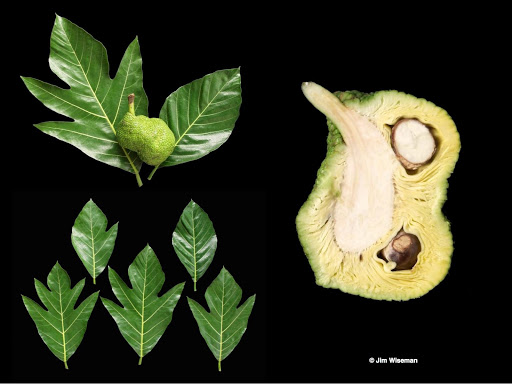 This wild seeded breadfruit relative is native to Palau and the Mariana Islands where it grows in limestone and ravine forests from the coast to lower mountain slopes. It is distributed through its natural range by fruit bats. Wild populations are seriously declining due to typhoon damage, predation by feral deer, and the disappearance of fruit bats. It has naturally hybridized with A. altilis and the numerous interspecific hybrid varieties are considered to be ‘breadfruit’, whether they are seeded or seedless.

Artocarpus mariannensis and hybrid varieties are a major staple food tree and widely cultivated throughout Palau, Mariana Islands, Federated States of Micronesia, Kiribati, Republic of the Marshall Islands, Tokelau, Tuvalu, Nauru, and Banaba Island. They are not grown elsewhere in the Pacific or other tropical regions except for a few trees in Hawaii and Rabi Island in Fiji, the latter introduced in the 1940s from Banaba. Hybrid varieties may be well suited for other atoll countries and coastal areas in the tropics because they are better adapted to sandy soils and saline conditions than most seedless A. altilis breadfruit varieties. 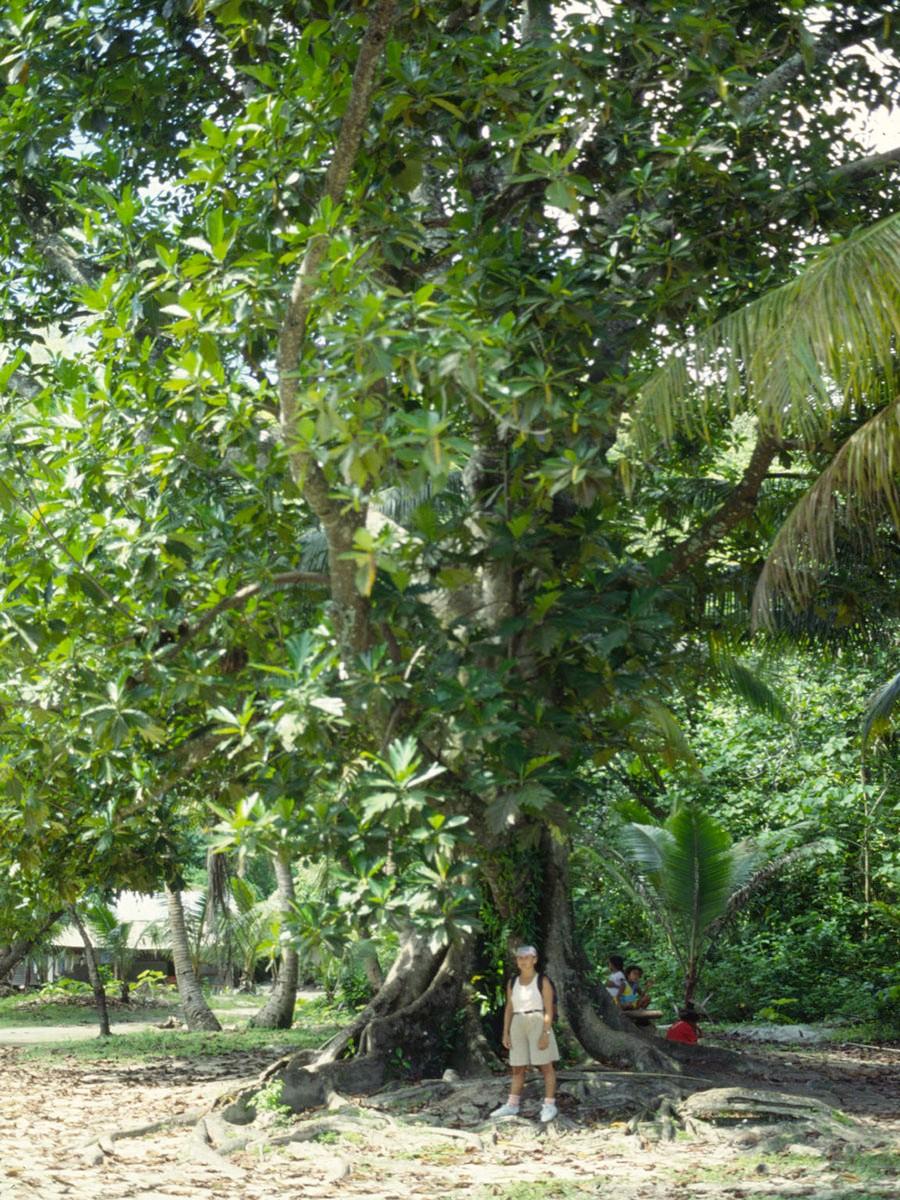 Trees of Artocarpus mariannensis and hybrid varieties can reach heights of 20 m or more. They tend to be more massive than breadfruit and breadnut, with large trunks 2 m wide at the base, extensive buttresses, and full, rounded canopies. They also tolerate salinity better. Leaves are typically entire or shallowly dissected with 1-3 lobes on the upper third of blade. The fruit is small, weighing 0.25-0.5 kg with dark green skin— even when ripe—with a pebbly texture. The flesh is deep yellow when ripe, with a sweet aroma and flavor. The fruit is not as solid or dense as breadfruit and contains few to many rounded dark brown, shiny seeds. This species is seed propagated.

The numerous hybrid varieties in Micronesia exhibit great variability in fruit and leaf form and can be seeded or seedless. The fruit are typically rough-skinned or pebbly, with light to dark green glossy skin, and creamy white to yellow flesh. The flesh is not as solid or dense as seedless Polynesian breadfruit varieties. Seeded varieties typically have lumpy, asymmetrical fruit 12-30 cm long. Some unusual forms have narrow, elongated fruit up to 45 cm long. Most seeded hybrid varieties are unique to a particular area since they are local seedling selections. Some varieties, such as seedless ‘Meinpadahk’, are widely distributed and grow on high islands and coral atolls. 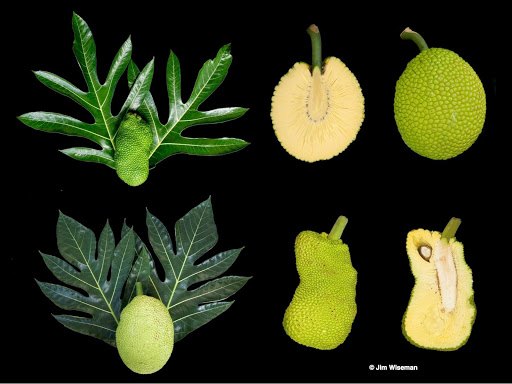